Four Fatal Gator Attacks in 76 Days Is a Statistical Anomaly. Here’s Why It Happened

"I really believe we have more people creating conflicts for wildlife out of respect, appreciation, and interest than we do people just being jerks." 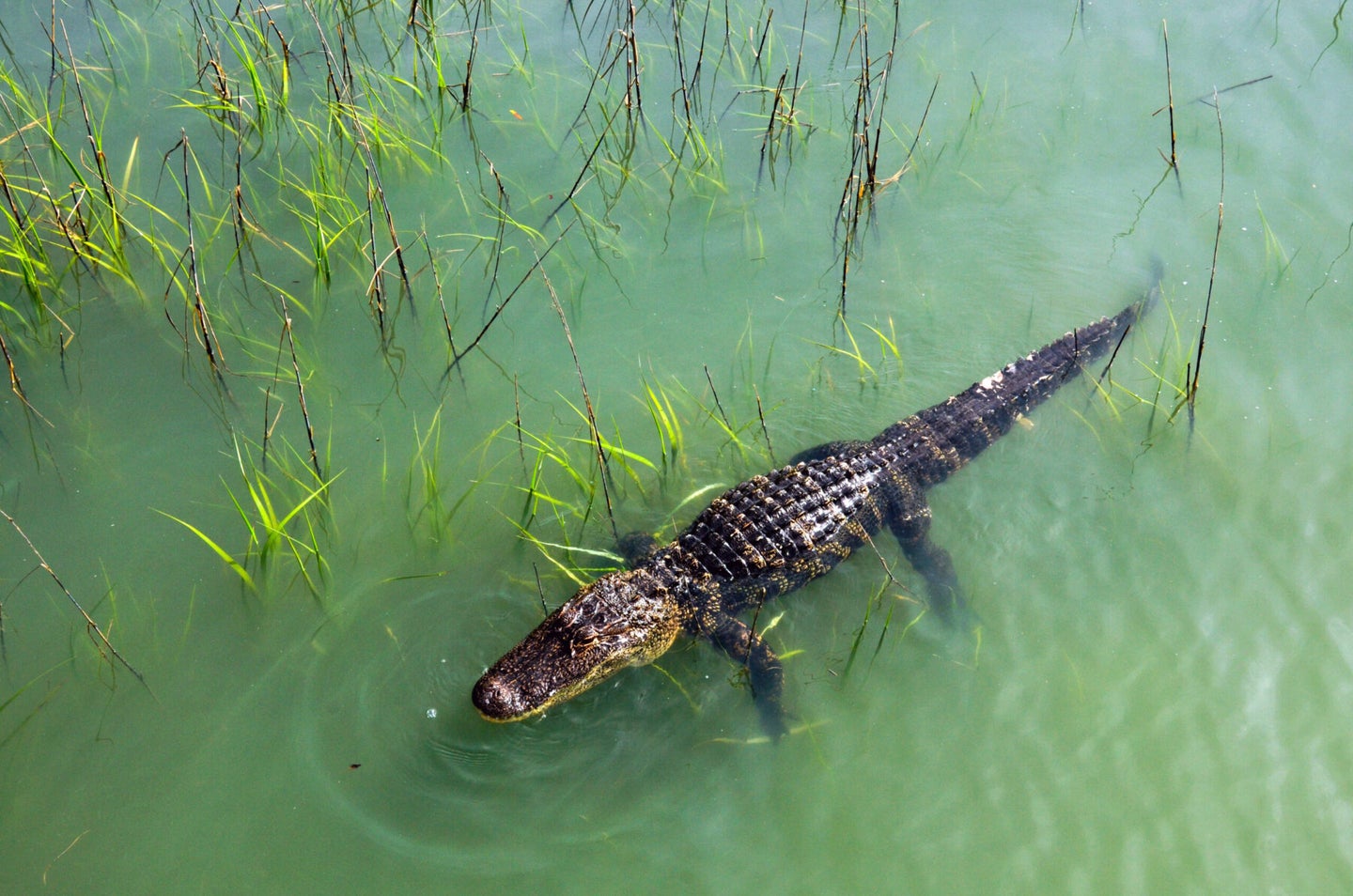 An 88-year-old woman from Beaufort County, South Carolina named Nancy Becker became the fourth person in the U.S. to succumb to an encounter with an alligator in less than 11 weeks when she accidentally fell in a pond while gardening on Aug. 15. Four deaths in 76 days might seem a bit higher than normal: that’s one death every 19 days. In reality, it blows the likelihood of getting killed by an alligator out of the swamp water.

Only about 4 percent of alligator attacks in the U.S. are fatal, according to the University of Florida. If you apply that trend to this summer, that means about 96 other people should have been attacked by a gator and lived—or more than nine non-fatal gator attacks per week. Fortunately, that’s not happening: The idea that 96 people suffered non-fatal aggressive encounters with gators in 76 days nationwide, provoked or unprovoked, is unrealistic.

Instead, Florida residents have dealt with an average of just eight unprovoked gator bites per year over the last decade, or one bite every six and a half weeks, according to the Florida Fish and Wildlife Commission. South Carolina has seen 21 encounters since 2000, or just fewer than one per year.

So what’s going on? Are alligator encounters on the rise? Or are they becoming more lethal? Kimberly Andrews, a coastal ecology and reptile specialist for the University of Georgia Marine Extension and Georgia Sea Grant, provides some insight into why both are true—and how to avoid future disasters.

South Carolina’s human population has grown by roughly 30 percent in the last two decades. Specifically, the population of Beaufort County (home of Sun City Hilton Head, the living community where Becker resided) saw 88 percent growth from 1990 to 2010 and 24 percent growth since then.

Urban sprawl in the area matches those statistics. Located right between where the Colleton and May rivers start widening and dumping into the Atlantic Ocean, Sun City Hilton Head and the surrounding area is home to some of the largest swaths of recent development in this coastal area (zoom in to Bluffton, South Carolina on this interactive map and look for the purple).

“This was actually where I was living when I started doing alligator work,” Andrews tells Outdoor Life. “My research was focused on alligator movement patterns in developing landscapes and working with residents and development communities on how to keep people safe without removing alligators.”

Regional population growth and sprawling development are increasingly crowding—and replacing—alligator habitat in this area and many others in the Southeast.

This might create the false illusion that people are invading alligator habitat on purpose and that the growing number of encounters are a result of ignorance or stupidity. Andrews says that’s not necessarily true, and especially not in Becker’s case.

“Ms. Becker wasn’t doing something foolish to the alligator to result in that response,” Andrews says. Authorities think Becker had been gardening near her home when she fell into a lagoon. “We can be conscientious of how we’re impacting alligator behaviors in ways that are unintentional but that also can result in these tragic situations. And most frequently this is from people feeding them.”

What’s particularly strange about the four deaths in the 76-day stretch is that they far outpace the historic ratio of deaths to encounters. This might create the illusion that alligators are becoming more aggressive in the rare moments that a human gets too close.

“But by nature, we are not the desired food source for alligators,” Andrews says. “We’re seeing that a lot of what they’re eating are actually smaller animals. They like raccoons, snakes, turtles, possums—they’re really important predators for a lot of those animals.”

Still, details from past fatal alligator encounters include mention of whole human limbs being discovered in alligator digestive systems. To a forensic eye, these instances don’t look like quick bites to defend territory or babies (which is what most alligator bites are meant to do, according to Andrews). In the more gruesome fatal scenarios, humans ended up on the menu. But it’s still probably our own fault.

“When we feed alligators, we go from an alligator saying, ‘There’s a human, whatever. They’re not bothering me and they don’t have anything to offer me so I’m just gonna chill over here, bask, swim around, and eat my turtles,’ to them associating us with one of their food sources,” Andrews says.

Feeding wildlife might seem like a universal no-no, especially since it’s illegal in some states like Florida. But for those who move to areas with unfamiliar ecosystems and food chains, especially food chains with threatened or endangered species that are rallied around and in need of protection and support, Andrews thinks the message is never too obvious.

“One of the really critical lessons here is that when we’ve encouraged these populations to be in our landscape, we need that to be coupled with education,” Andrews says. “People need to know how to safely live in their backyard with the species that are there, whether it’s an alligator, a grizzly bear, or a wasp nest. We don’t have to fear these things if we know how to handle them in ways that are responsible for the animal’s wellbeing and our own wellbeing simultaneously.”

Ironically, any detrimental feeding or harassing of animals tends to result from desire to help the animal. That includes a person who brings home an “abandoned” whitetail fawn to feed and shelter it, or someone who relocates a bird nest because the chicks are out in the rain.

“We’ve had to remove alligators that people were feeding, and when we explain to them that we now have to kill this animal, oftentimes they were really upset because they were feeding the animal because they liked it,” Andrews says. “I really believe we have more people creating conflicts for wildlife out of respect, appreciation, and interest than we do people just being jerks. But we have to teach people how to responsibly respect and enjoy wildlife. Think about if you just gave cars to people and you didn’t tell them to stop at red lights.”

Every alligator-caused human fatality is a tragedy. But ultimately, according to Andrews, they are still an extreme rarity, and this recent 76-day phenomenon is in part a really horrific coincidence.

“Our brain is trained to look at the statistics and say these instances are increasing. And that is of concern, don’t get me wrong, I’m not dismissing that. But just to contextualize this, we do have to remember that every single day, thousands and thousands of people live with thousands and thousands of alligators,” Andrews says. “That’s not to dismiss the tragedies where they occur, but that is to contextualize that these outcomes are still a rarity that, by and large, we can actually prevent.”

In warmer climates where alligators are prevalent, they can become active and start courtship as early as March when the weather starts to heat up. They will then sometimes hatch eggs until October if the temperature stays high enough for it. During these summer months, giving swampy bodies of water a wide berth is important. Exercise caution when in proximity to any pond, lake, or marsh, especially at night.

If you do get too close to an alligator and it attacks you, attempt to jab its eyeballs, punch it in the face and head, or even try to gag it with a large object if absolutely necessary. The age-old advice of running in a zig-zag is useless. Run away as fast as you can until you clear its territory.

Finally, under absolutely zero circumstances should you ever feed alligators.

“This recent situation, this death, is a tragedy,” Andrews says. “But isn’t one of the ways to honor Ms. Becker’s legacy to teach ourselves about what went wrong and what instead we can do so that we don’t have more deaths in the future? Out of problems and tragedy come opportunities. There are so many things we’re out of control of, but we actually are in control of this.”