I Started Hunting a Few Years Ago, and My Family Doesn’t Exactly Support It—Yet

There are right and wrong ways to introduce your non-hunting family to your new lifestyle. Either way, earning their understanding (and interest) will be a work in progress 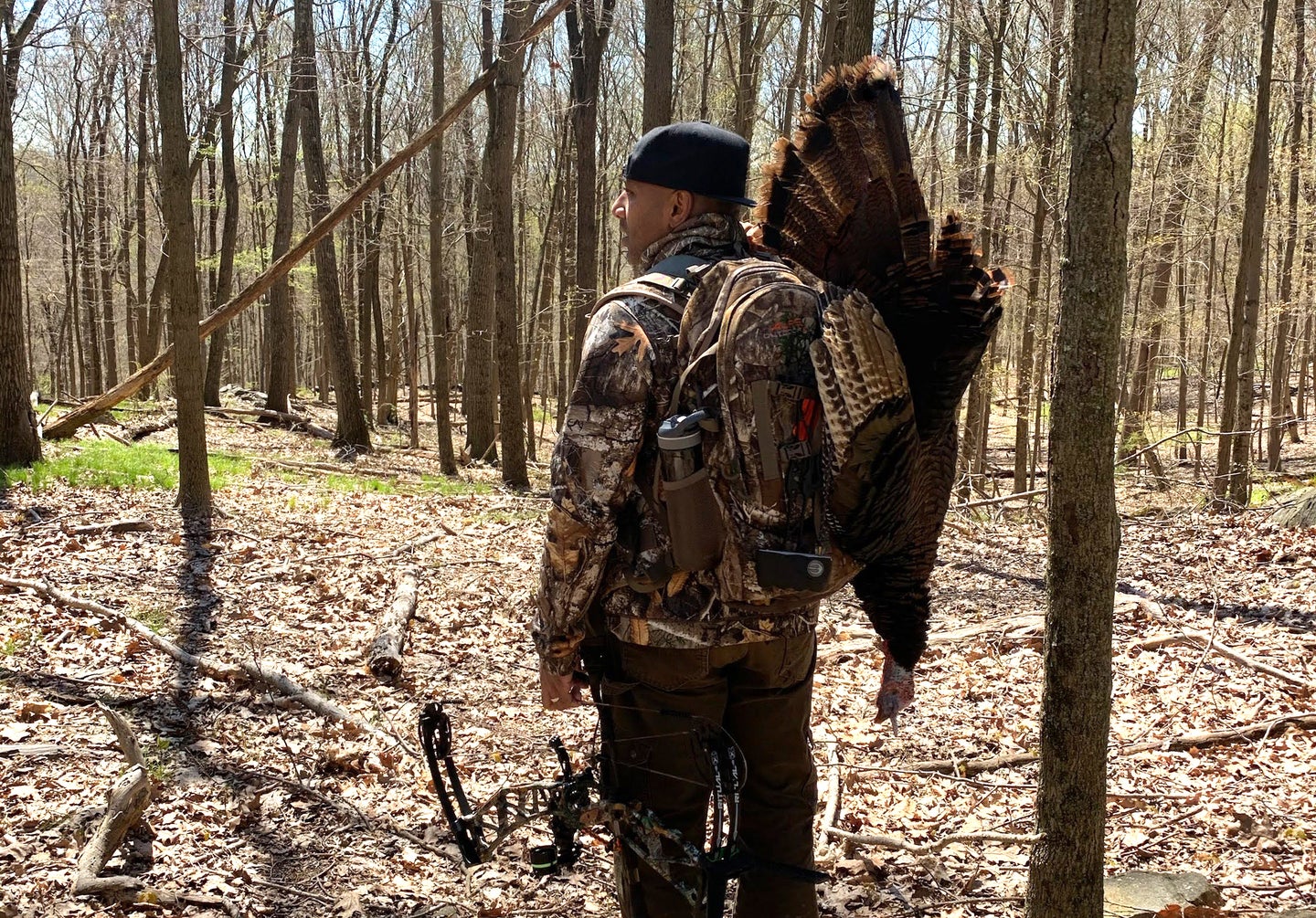 This photo helped the author's daughter make a connection between her dad's interest in hunting, and the food on her plate. Cliff Cadet
SHARE

The alarm on my cell phone goes off and I can’t feel my arm as I reach out to silence it. It’s asleep. I wish the rest of me was too. I keep reaching and then, BOOM! I misjudged the distance and now I’m on the floor.

Part of the problem is that I forgot I slept on the couch. It’s 2 a.m. on a Saturday morning, and I don’t think it’s fair to disturb my wife when I’m getting up to hunt. She agrees. I lie there for a minute, asking myself, why are you up this early? You could easily crawl into bed with your loving wife and go back to sleep.

Truth be told, from all the noise I’m making she’s probably up and already annoyed. It’ll be safer if I keep my behind in the living room. My goal to stealthily get up, get dressed, and get out the door is a bust. Maybe I’ll fare better in the woods.

Apart from falling onto the floor, this is my routine every morning that I head out for a hunt. I’m the only one in my family who hunts, and it can suck sometimes. Especially when it leads to early mornings all by my lonesome. As a husband and father of three, it’s been a challenge getting my family on board with my hunting adventures. And who can blame them? I mean…we live in New York City. It’s a mecca of music, culture, and food. Food is everywhere. We can enjoy some great takeout in Chinatown, grab some delicious pasta in Little Italy, and end with some of the best chicken tikka out in Little India. All of this can be accomplished within an hour. With access to such tasty delights, who’d want to be up way before dawn, heading out of the city and into the woods, to chase their food? Me.

My wife’s not an anti-hunter. Her outlook on hunting is fairly positive, and she respects those who do it out of necessity and those who adopt it as a lifestyle. But she sees no reason for me to do it. With almost unlimited access to food, she believes that hunting is not a necessity for our family. She sees the money I’ve spent on hunting equipment as a waste.

At first, she was pissed about my bow purchase. I’ll take the L on this one: I purchased it on the sly and hid it outside our apartment door. The plan was to sneak it in once everyone went to bed that night. BIG mistake. My dumb ass fell asleep before everyone else, and I woke up to a less than warm reception the next morning. Not the best way to introduce a new interest to the family.

So, the gear purchases haven’t gone over well. But what I also didn’t realize was how uncomfortable she was with the idea of me taking a life—even that of a wild animal. So my Christian wife looked to prayer and scripture to help with her acceptance of my hunting. And she found something that did help: literal scripture that confirmed to her that hunting is not a sin. Since then, she’s been a little more accepting, and she’s trying to support me and my newfound “hobby.”

In my own research, I’ve found more than 40 Bible verses that reference hunting and none of them portray the pursuit in a negative light. From there, I went on to highlight the health benefits of eating wild turkey and venison over store-bought meat products (though that’s still an argument I’m not winning).

As we’ve continued to debate the points and purpose of hunting over months and years, I’ve grown to understand that my wife isn’t necessarily against my hunting itself. It’s more about the fact that the time I spend in the woods is time spent away from our family. I’m still learning how to find a happy balance.

So, I would like to take a moment to publicly thank my wife. Thank you for putting up with those early mornings I accidentally wake you up and you can’t go back to sleep. Thank you for dealing with all the gear that is taking up space in our home. (I’m also sorry for not always being forthcoming with information about that gear, but I promise to get better at it.) And lastly, thank you for allowing me the opportunity to get out into the woods and learn more about the outdoors. I hope you’ll join me on a hunt soon.

Now, my kids are a totally different story. I don’t believe they’re for or against hunting. My oldest son is in his mid-twenties and has no desire to venture out into the woods. I’ve tried to get him to join me on a hike, but it’s a hard pass for him. I haven’t even figured out exactly what his aversion to the outdoors is about—he hasn’t said. But I won’t give up. I still believe I can get him out there with me and he’ll have a blast. From time to time, he makes fun of me, referring to me as Daryl—the character from “The Walking Dead.” While Daryl Dixon is a great character and TWD is a great show, I must remind my son that Daryl shoots a crossbow and I shoot a compound bow. There’s a big difference.

My teenage daughter also has no wish join me in the woods. But unlike her big brother, she actually has a valid reason for not wanting to join me in the woods. She is absolutely terrified of spiders and knows that the woods are filled with them. When I’ve told her about my hikes from the car to my hunting spot and how many spiderwebs I’ve walked into on the way, she simply replies, “See? Nope. I’m not doing that!” But when I killed my first turkey last year and my wife cooked it, my daughter gobbled it up. And the best part of it all was the look on her face when I shared a picture of the turkey—before butchering it. It was a photo of the dead bird slung over my shoulder as I hiked out of the woods. I could see her make the connection between the moment captured in the picture and the food on her plate. It was awesome.

My youngest son is more adventurous than his older siblings. As a 9-year-old, he’s really into his video games, like “Minecraft” and “Fortnite,” so I try to relate what I do in the woods to what he enjoys most in those games. Just last month, he joined me on a hike that doubled as a scouting trip. While we have been hiking as family before, the public land we visited was a lot wilder than the trails we’ve experienced. The two of us spent the afternoon identifying deer sign and splashing through a creek. While all that was fun, the icing on the cake was when we bumped two does. It was my little guy’s first time seeing deer—ever. It was an important experience to share with him. Maybe he’ll be the first of the family to join me on a hunt.

Read Next: Let Your Kids Schedule Your Hunts, and Other Advice for New Adult Hunters

This isn’t a sob story. It’s just the beginning of another journey as a family. While I hunt solo most of the time, I do get to hunt with a buddy occasionally. But my family is my heart. And while I do appreciate my solitary moments in the woods, I believe the experience would be more meaningful if I shared it with my wife, or my kids, or all of them.

It is, however, a cautionary tale. If you’re an adult-onset hunter, keep an open and honest line of communication with your spouse. Do that, and introducing hunting to your family will go more smoothly than what I tried. You might even get to sleep in your own bed.