Coming soon to an ocean near you 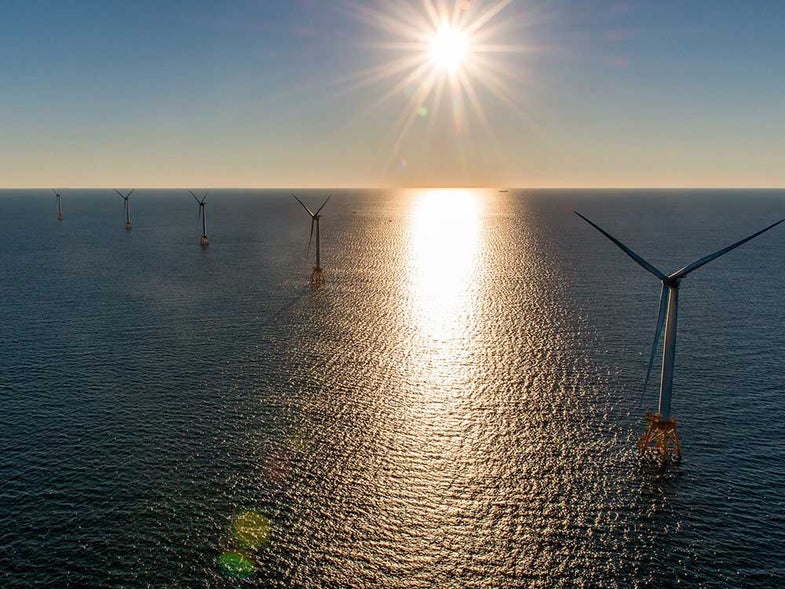 Last December, the nation’s first offshore wind farm went online. Located 4 miles off Block Island, R.I., these five turbines are undoubtedly a harbinger of things to come in terms of renewable-energy resources. But perhaps even more intriguing is their future as fishing hotspots. That windmills can generate electricity is fact. That they can act as FADs (Fish Aggregating Devices) is somewhat open to conjecture, but optimism abounds.

Up and down the East Coast, the Bureau of Ocean Energy Management (BOEM) has designated Wind Energy Areas. Some are just in the planning stage, other areas have been leased. Off the coast of Long Island, N.Y., for example, there are three current proposals for wind-farm construction on a much larger scale than the one off Block. In January, the Long Island Power Authority approved developer Deepwater Wind’s plan to build 15 such turbines between Long Island and Martha’s Vineyard in Massachusetts. Even more are planned off the South Shore of Long Island.

There are environmental and economic trade-offs to offshore wind energy, but what does such potential large-scale windfarm construction mean specifically for anglers?

Most of us think structure right off the bat. Adding hard substrate in just about any environment generates fishing opportunities. The many state-run but angler-funded artificial-reef programs illustrate this well. More relatable are the oil platforms off the Louisiana coast, which have contributed significantly to fishing in that region. “If anything close to that happens here, we will see some pretty interesting results,” says Saltwater Sportsman conservation editor Rip Cunningham.

Wind farms in excess of 100 turbines have been in operation in the English Channel and North Sea for the better part of two decades. Researchers for a 2006 report—”Danish Offshore Wind: Key Environmental Issues”—noted, “A consequence of the change in community structure was a local increase in biomass by 50 to 150 times.”

Shakedown Cruise
Greg Dubrule, captain of the Black Hawk party boat out of Niantic and Stonington, Conn., has been fishing near the Rhode Island wind farms since they became operational last fall, and he is bullish about their ability to attract and hold various fish species.

“It depends on the day, but we often fish within just a few hundred yards of the windmills,” says Dubrule. “We’ve done real well on sea bass, porgies, and cod. Whether the things are holding fish right now is hard to say because they’re so new, but I’m pretty sure that in time they will.”

One can only speculate about the aggregation of sportfish that might occur should the proposed 190 wind towers south of Long Beach, N.Y., be approved.

“The area hosts a soft bottom in every direction for dozens of miles,” says local charter boat operator Captain Frank Crescitelli. “With water depths upwards of 125 feet, there would likely be concentrations of mahi during the summer months. Tuna would probably show in the fall. In the shallower portion, black sea bass and tautog should be stacked on every stanchion.”

“Anglers, at least those fishing from boats, seem to generally support wind-farm construction,” says The Fisherman editor Fred Golofaro. “But there is some concern about access.”

Fishing Farms
“Near Block Island, anglers are allowed right up to the towers,” says Captain Rick Bellavance, president of the Rhode Island Party & Charter Boat Association and liaison for developer Deepwater Wind, “as long as they don’t tie up.”

“BOEM has no intention of restricting access to fishing activity near offshore wind facilities,” says Brian Hooker of BOEM’s Office of Renewable Energy Programs. For now, at least, neither does the Coast Guard.

How construction continues remains to be determined, but it most assuredly will. Commercial fishing associations are suing BOEM because they won’t be able to drag nets through the farm arrays. Bird conservation groups are pushing back as well.

However, unless there is some administrative order banning wind farms in the Atlantic, the question right now is not if they will come, but when and where. And anglers are more than prepared to reap the benefits.