Spearfishing for the Gray Ghosts of Southern California 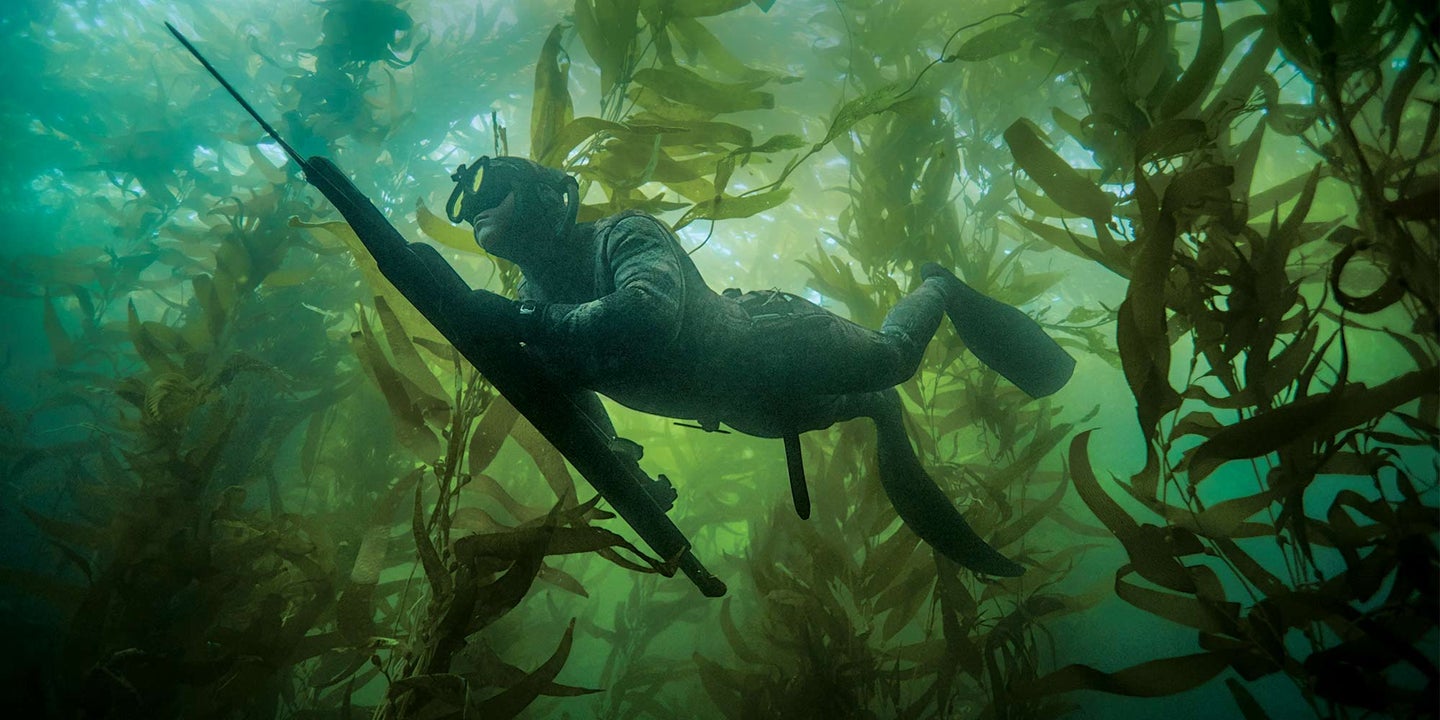 Story by Mike Raabe, as told to Natalie Krebs

You’re not a true spearfisherman in California until you’ve speared a white sea­bass. And after you’ve done that, you’re still not legit until you’ve killed a fish that tips 70 pounds.

These are the accepted, if unofficial, rules of SoCal’s spearfishing bums, a relatively small but hardcore group of sportsmen and -women who hunt the elusive fish year-round. WSB show up in the strongest numbers from March to June, when they start slipping into the kelp beds along the coast to spawn. Spawning peaks during the new moon, when you hunt the fish by listening for them.

“Bass” is a misnomer, as this species actually belongs to the croaker family. Some WSB calls sound like a frog and a cat trying to mate, but the croaking of a spawning male is akin to a boat misfire—you feel it in your chest. Croaks usually mean you’re closing in, but most of the reverberations my buddies and I heard during this year’s spawn led to nothing. This was the slowest season in the 11 years I’ve been going, and we fought hard for the two bass pictured on these pages.

White seabass hunters are free divers, which means we rely on our lung capacity. This is because scuba equipment is loud. It scares fish and turns you into an alien in the underwater environment. But free diving lets you become a part of the ocean. You’re able to observe, hiding in silence or interacting with animals naturally. And that’s important, because these chrome-colored fish are called gray ghosts for a reason. They may be the largest prey in the kelp, but they’re also the most challenging to find. So there’s a certain frustration—not to mention danger—in free diving for them. But that’s half the fun. 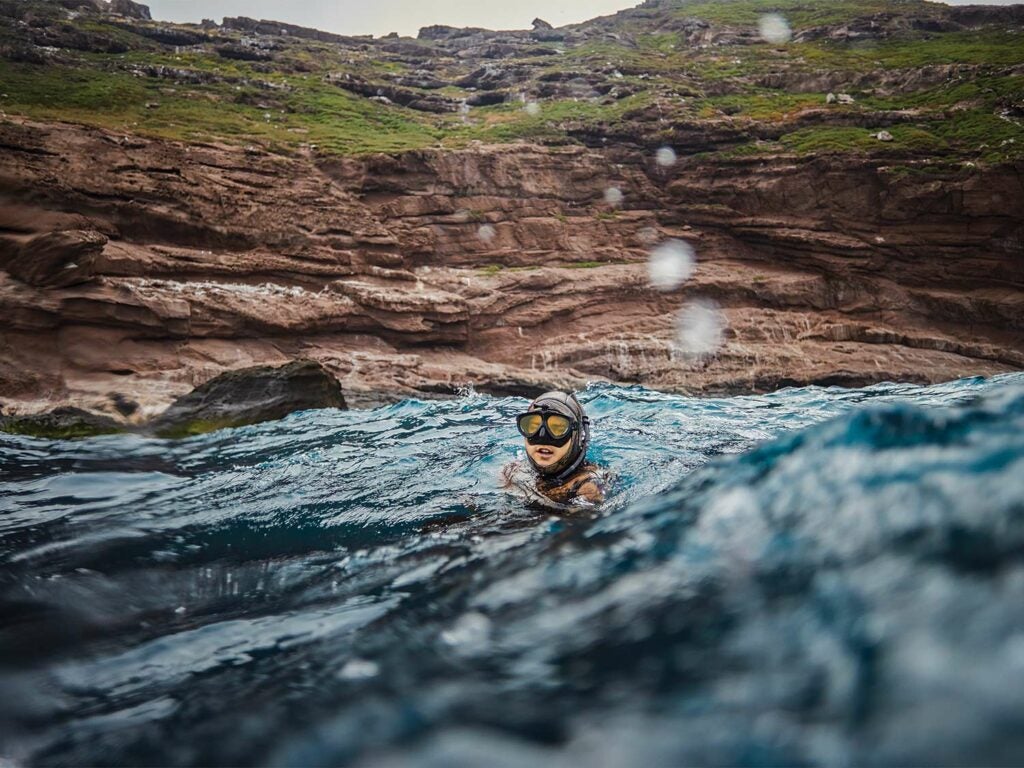 This cove in Baja looks like a washing machine on the surface, but underneath, the sea is calm. Even so, only experienced divers should fish here. 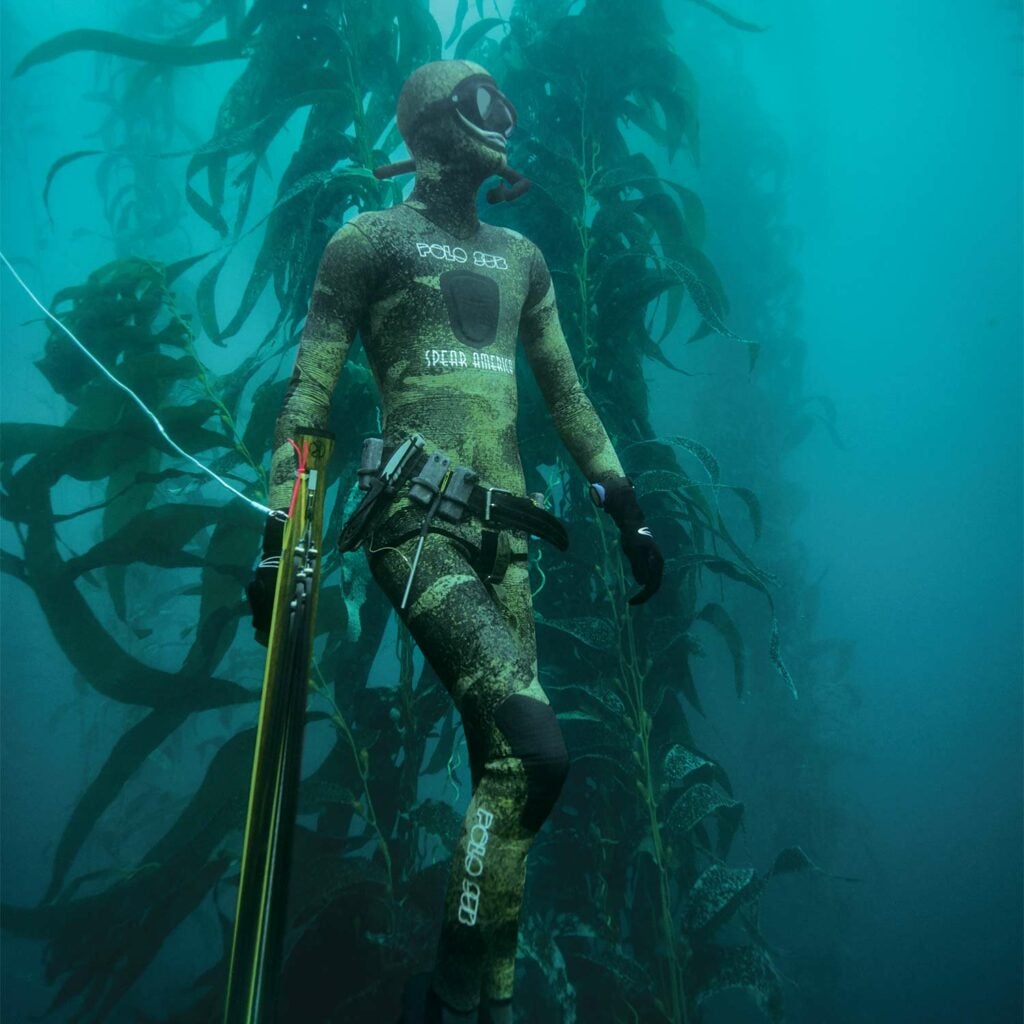 Visual concealment—usually achieved with a camouflage pattern and by sticking to shadowy kelp for cover—is just one thing spearfishermen have to keep in mind when chasing white seabass. Because the fish can both hear noise and feel vibrations, divers must take care not to, say, bump their speargun on the bottom while listening for croaks. Even bubble control when exhaling is key—and don’t even think about ­farting in your wetsuit. 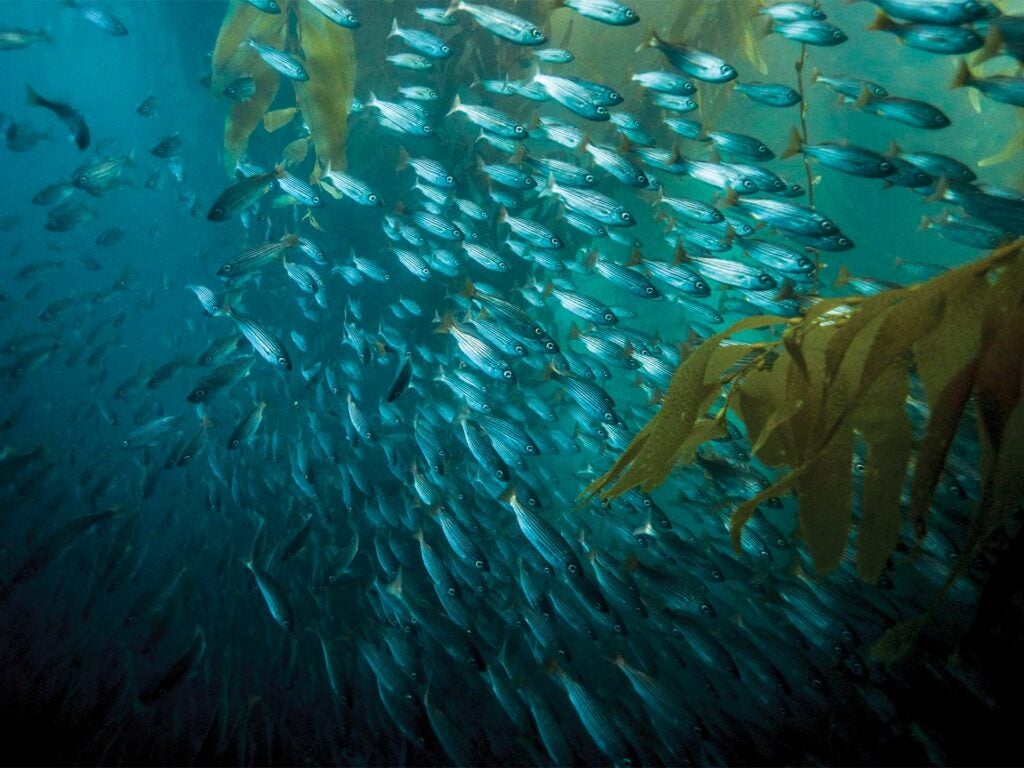 Salema fish are a good indicator that WSB are in the neighborhood. It’s wise to swim carefully when they’re near so you don’t spook them or the seabass. 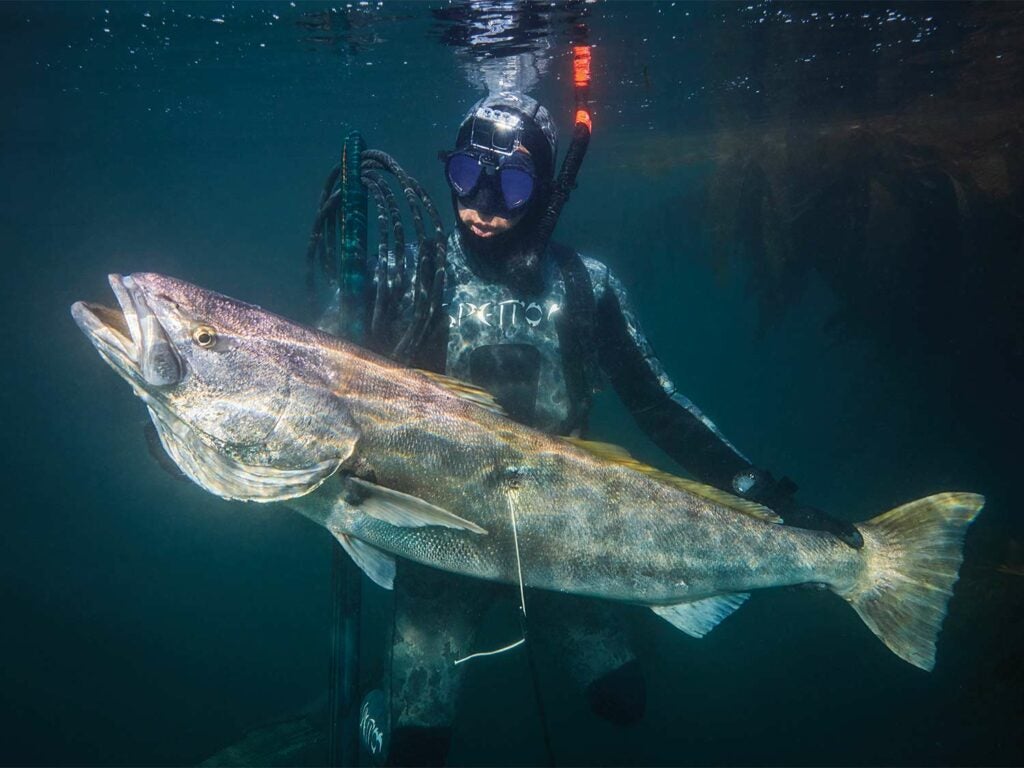 Catch of the Day 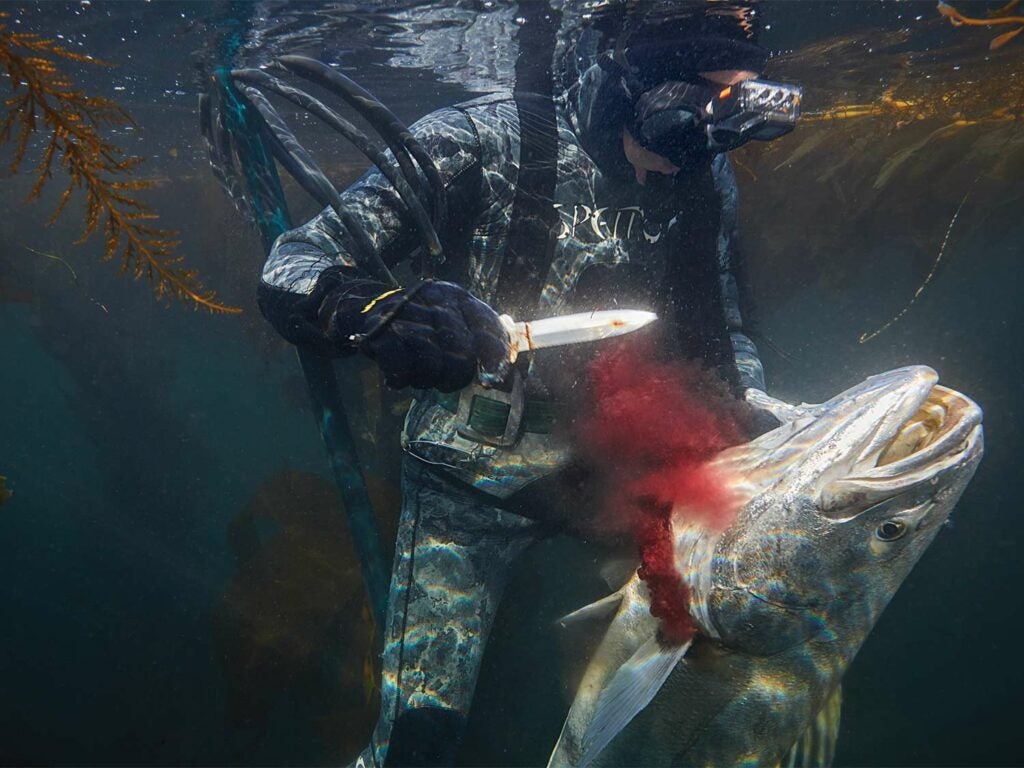 One quick incision near the gills to bleed the fish will keep the meat fresh and untainted. Another thrust to the brain will dispatch it quickly. 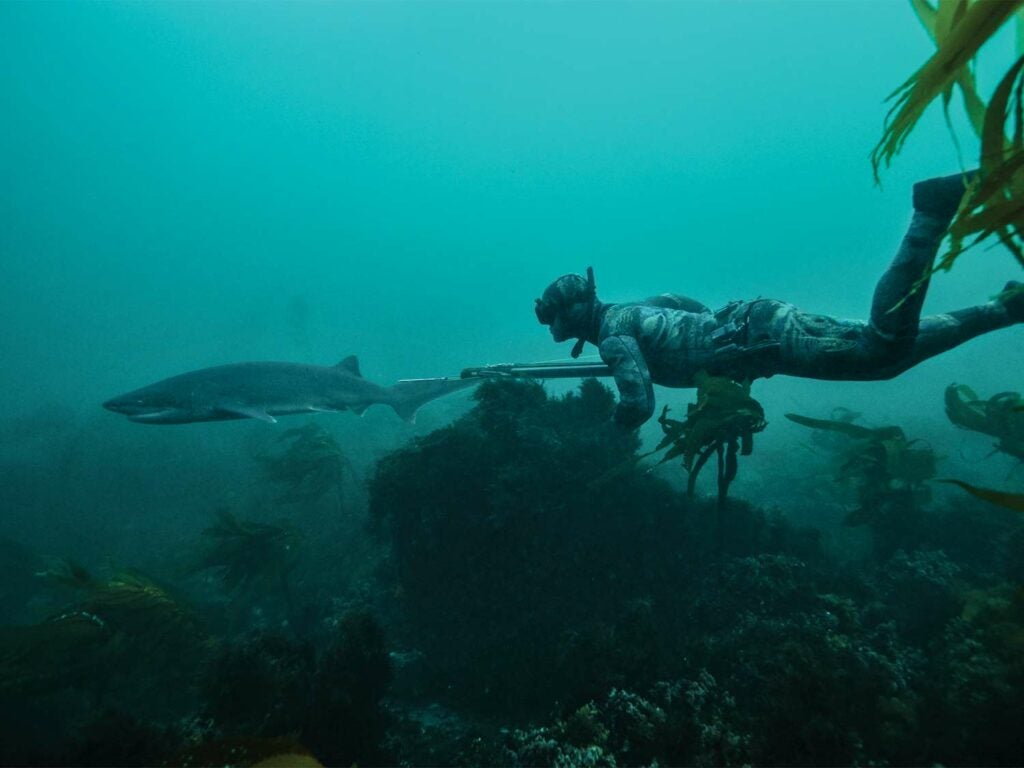 More sevengill sharks seem to appear in our hunting grounds each year. I don’t worry about them, as they’re indifferent to us—but not to the fish we spear. 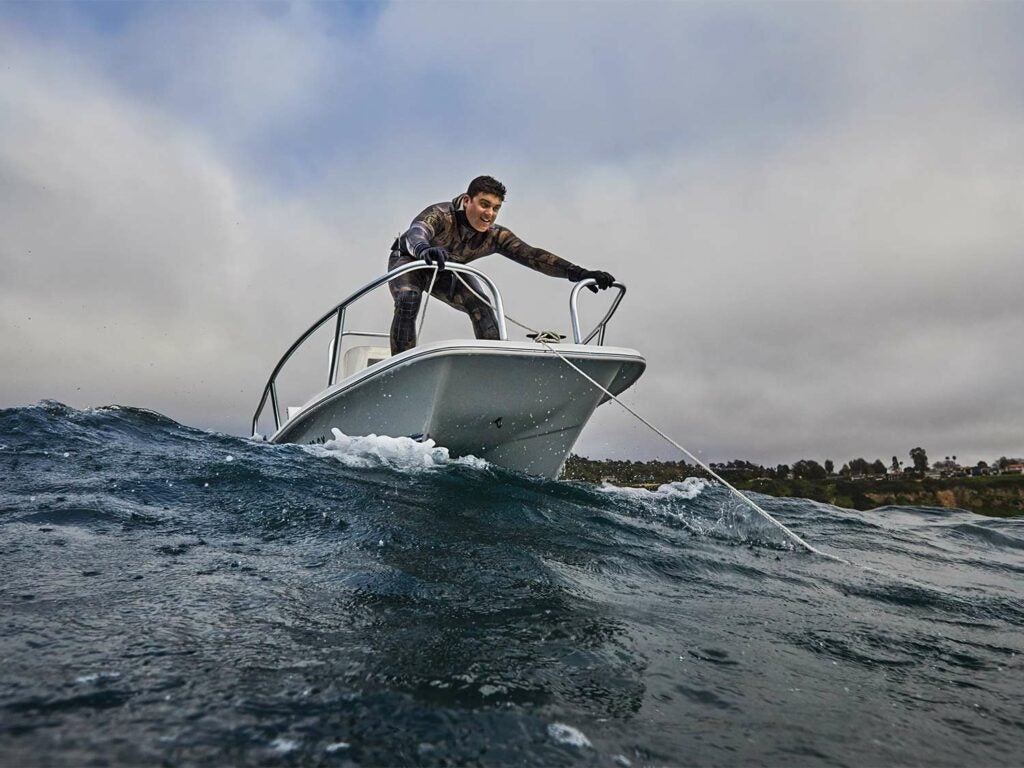 Boating allows us to hit multiple spots in one day, although anchoring offshore in turbulent waters can sometimes get dicey. 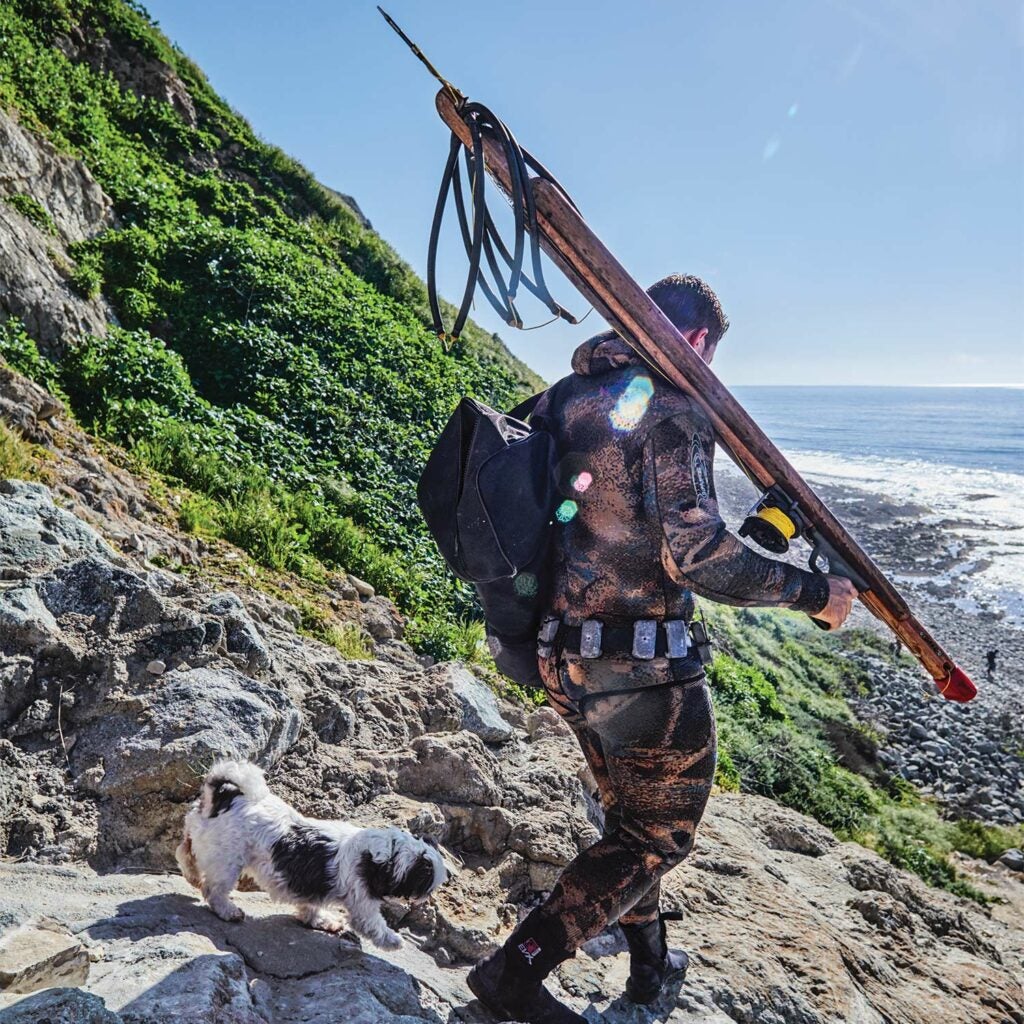 Diver Ryan Moore—­followed by the family dog, Luna, who will sit on the rocks with Moore’s wife while he fishes—carefully descends to the coast by way of a steep strip of public land. Some residents of the nearby multimillion-dollar homes are attempting to shut down access to prevent spearfishermen like us from frequenting the spot. 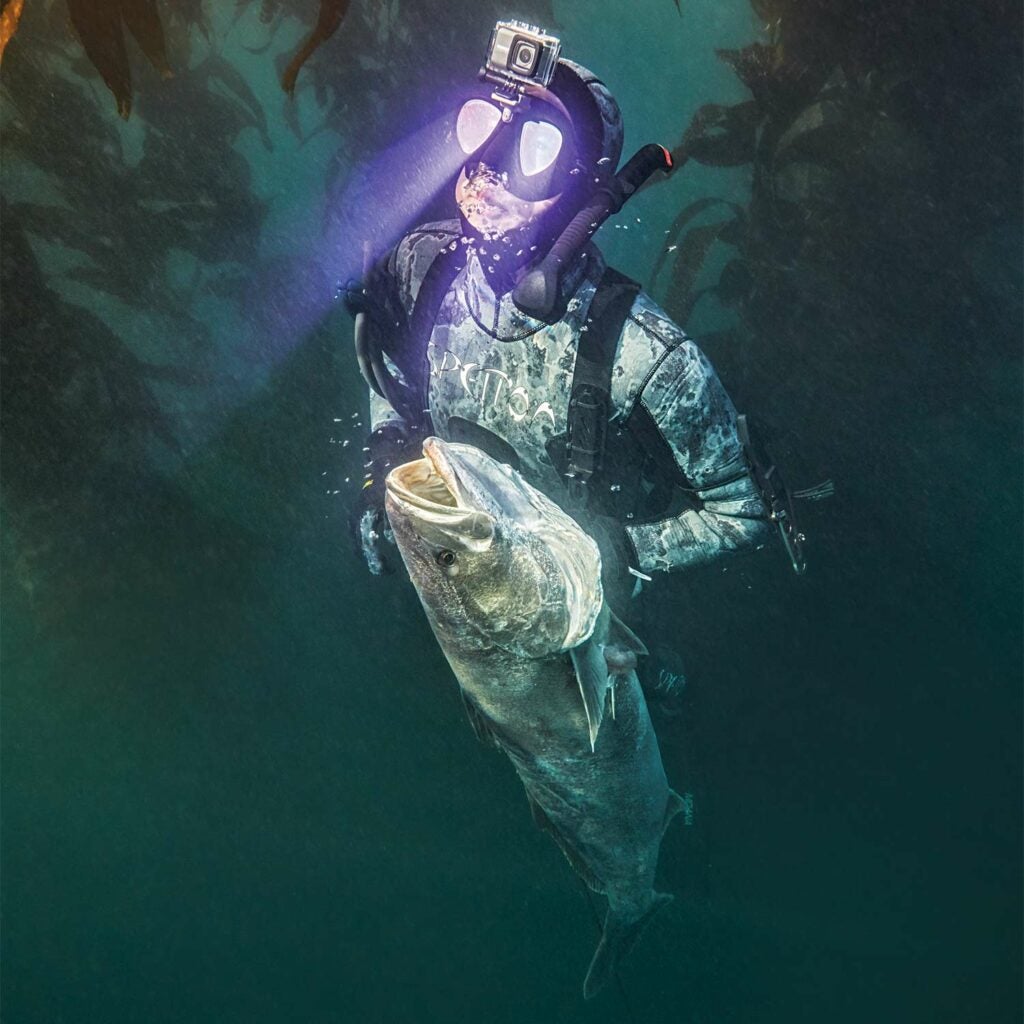 WSB can be found from 5 to 70 feet deep. Here, the sun reflects off Okamoto’s mask as he makes one last lung-­busting push to the surface with his WSB. 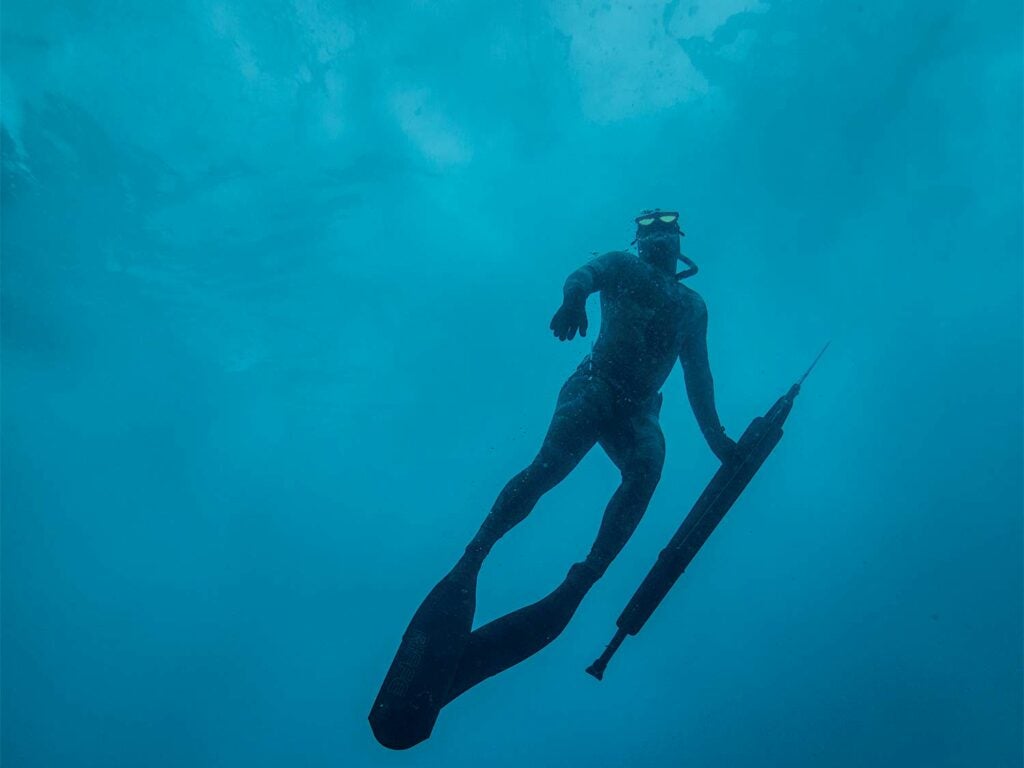 Hunting WSB can require up to 100 dives in a single day. Most spearfishermen max out at two minutes when swimming, or as many as five minutes when still. 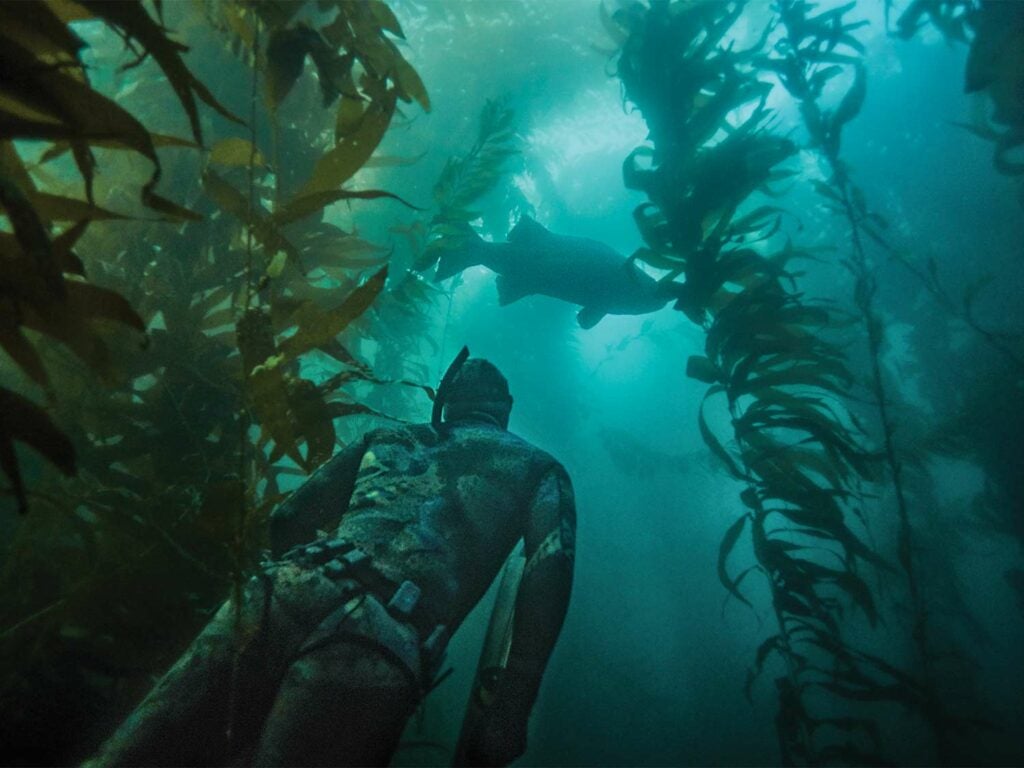 Stealth is mandatory, and so is positive species identification. I was initially certain this fish was a WSB but soon realized it was a protected black seabass. 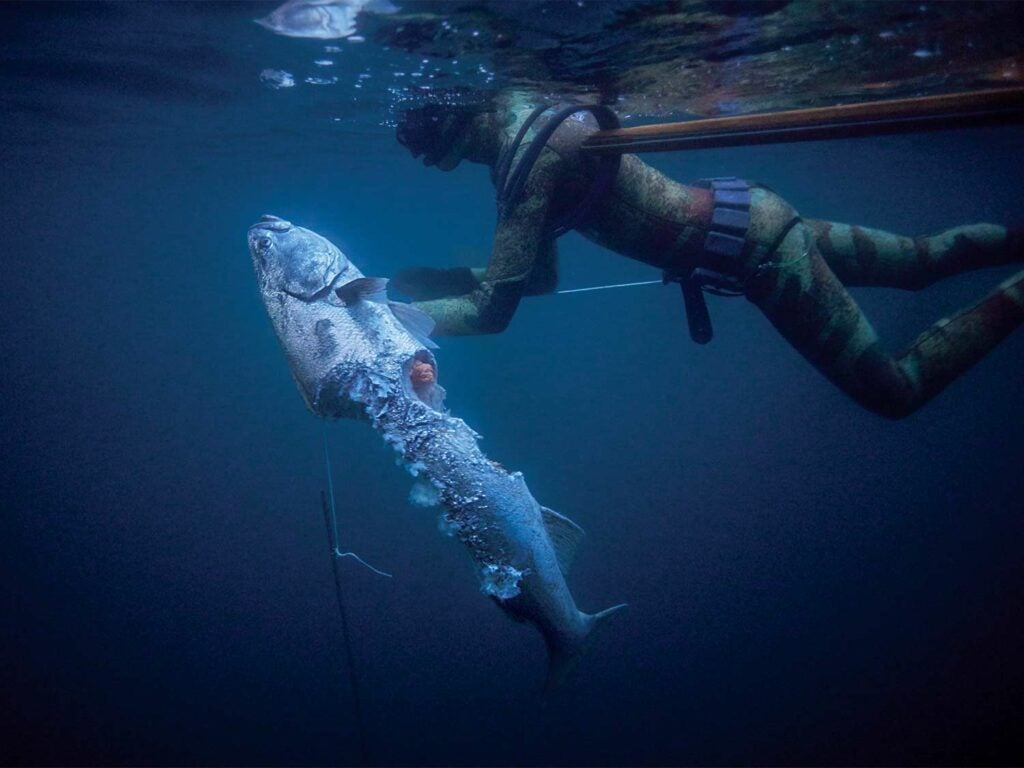 Sharks may not bother us, but they’ll make quick work of unclaimed fish. Scott Blumer recovered his WSB minutes after shooting it, but sevengills got there first. 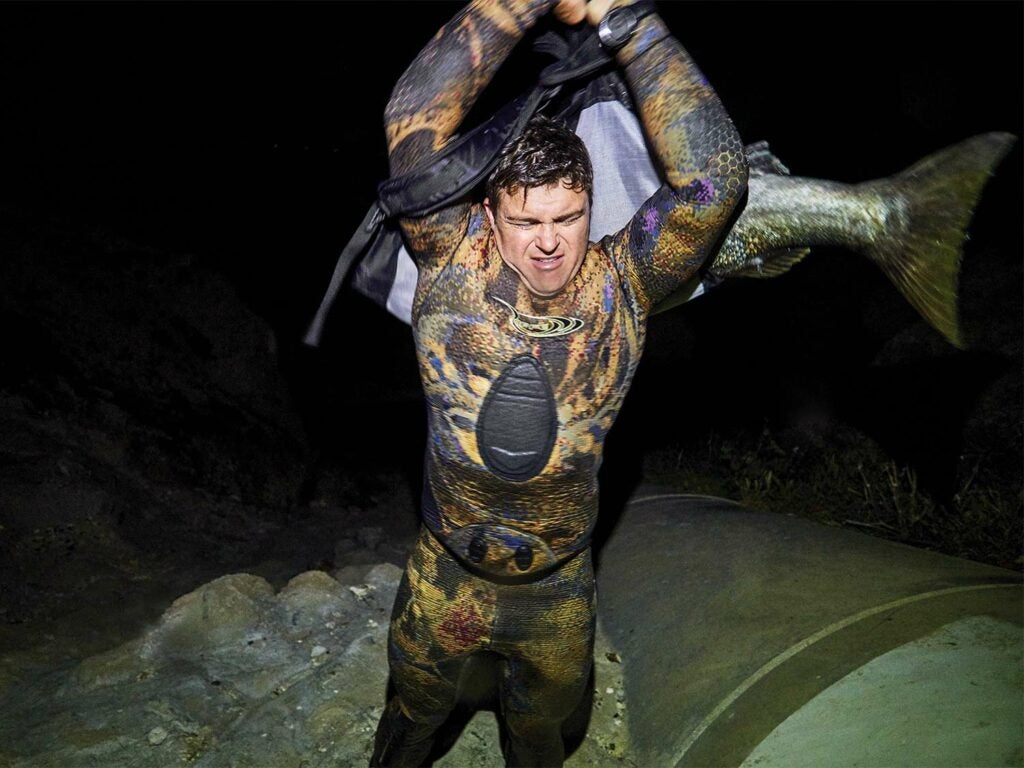 Packing fish may require fewer trips than with an elk, but it can be just as grueling. Here, Moore takes a shift hauling Blumer’s 56-pounder up a cliff. 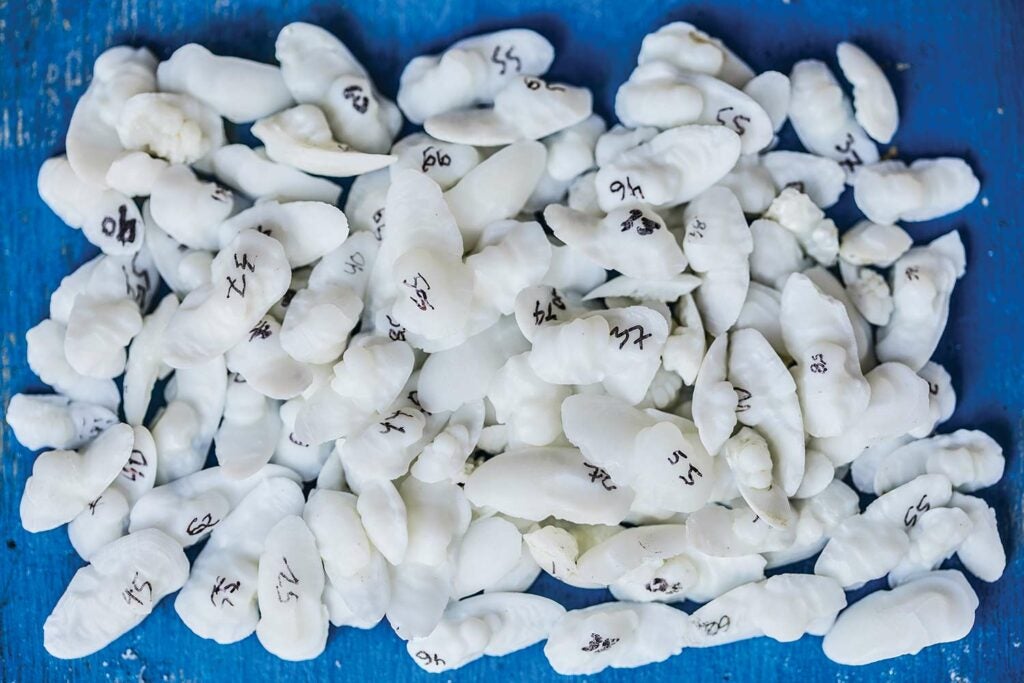 Just as hunters save elk ivories, spearfishermen pry the two otolith stones from the inner ears of WSB. This collection is annotated with the weight of each fish.
Natalie Krebs