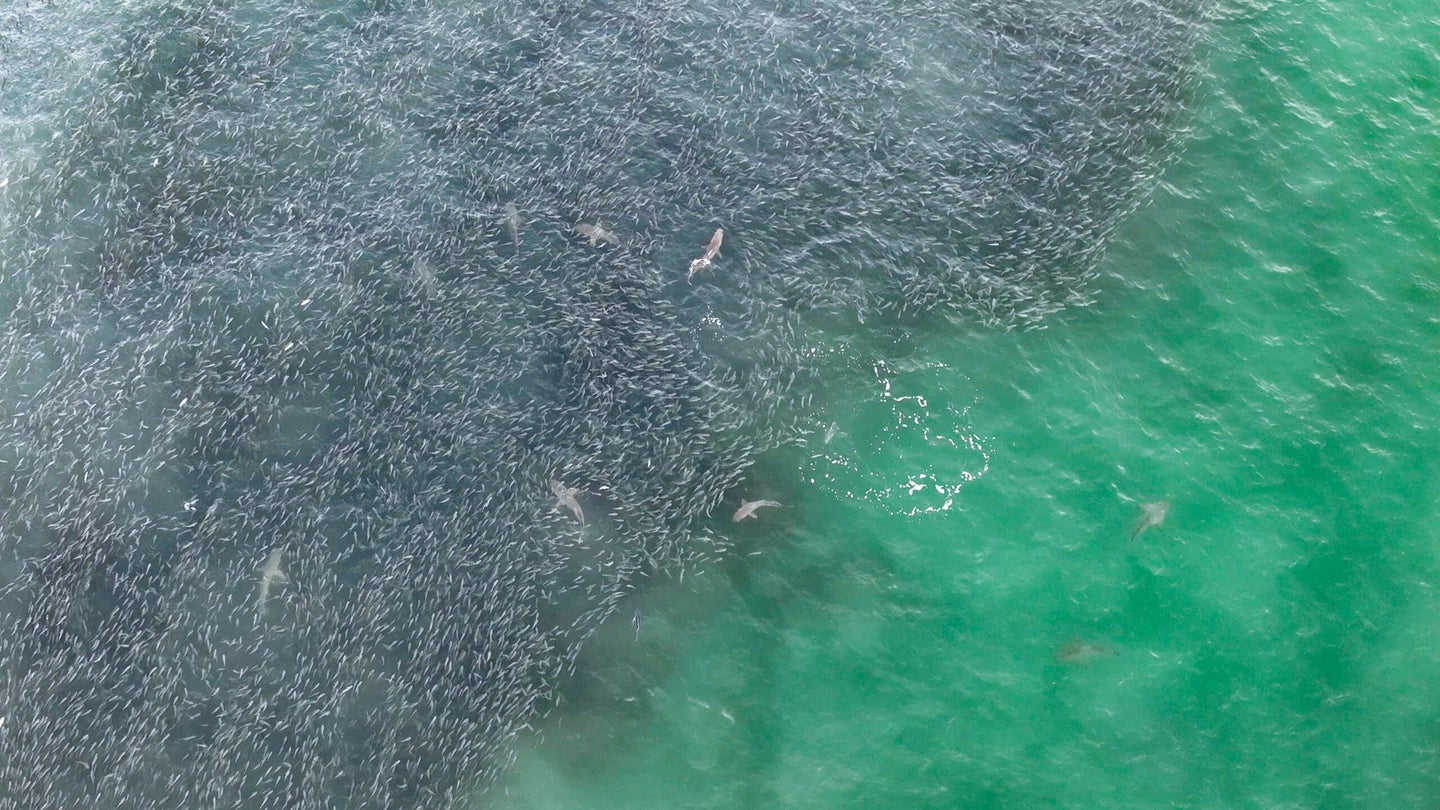 Blacktip sharks gorge on a school of mullet during the fall migration. Paul Dabill Photography
SHARE

Whenever he’s got 20 minutes to spare, Paul Dabill will swing by the beach near his home in southeast Florida. The longtime freediver and underwater photographer will unpack his drone, which can fly up to 50 mph, and scout the coast a mile in each direction and out to sea for critters to document.

This week, he uploaded an incredible video of dozens of black tip sharks feeding on a big school of mullet. Mullet migrate along the Florida coast each fall, typically passing Palm Beach, where Dabill lives and works as a restauranteur, from September through early October.

“It’s a very exciting and very dramatic thing to watch,” Dabill tells Outdoor Life. “They’re typically very close to the beach, and a lot of predators come in and try to eat them.”

Primary predators include blacktip sharks, like the ones pictured in this video, as well as jack crevalle and tarpon. Blue fish and barracuda will also occasionally show up to the party. Dabill discovered this particular feeding frenzy after launching his drone from Coral Cove Park on Jupiter Island in late September. Dozens of blacktips can be seen cutting paths through the mullet, leaping above the surface, and thrashing as they eat. The mullet—and the sharks—swam right next to the beach, which is visible in the video.

“There’s usually a couple sharks around, but this was the best session I’ve had this season with the most sharks feeding on one school,” says Dabill, who filmed this feeding frenzy for about 25 minutes. “I’ve seen schools that would stretch over a mile in length. I would consider this school quite large and dense, but it wasn’t a particularly big school. It’s pretty fascinating how big these schools can get.”

Blacktips are “quite skittish” as far as shark species go, according to Dabill.

“I don’t see them underwater a whole lot and when I have, they don’t want anything to do with you,” says Dabill, who has been a freediving photographer for about 10 years. “They’ll scatter quickly. That being said, they still can be responsible for bites but that’s usually when you’re in shallow, murky water and there’s baitfish running and they’re feeding. And if a person happens to be swimming there they might get accidentally bit. But they’re not seeking humans, it’s just that humans happen to be in a murky bait pod and that might not be a good thing.”

Dabill is passionate about documenting “the amazing marine life” in the Jupiter-Palm Beach area. His videography has appeared on National Geographic and the Discovery Channel. You can find more of his videos and photos, some of which are for sale as prints, on his Facebook and Instagram pages.