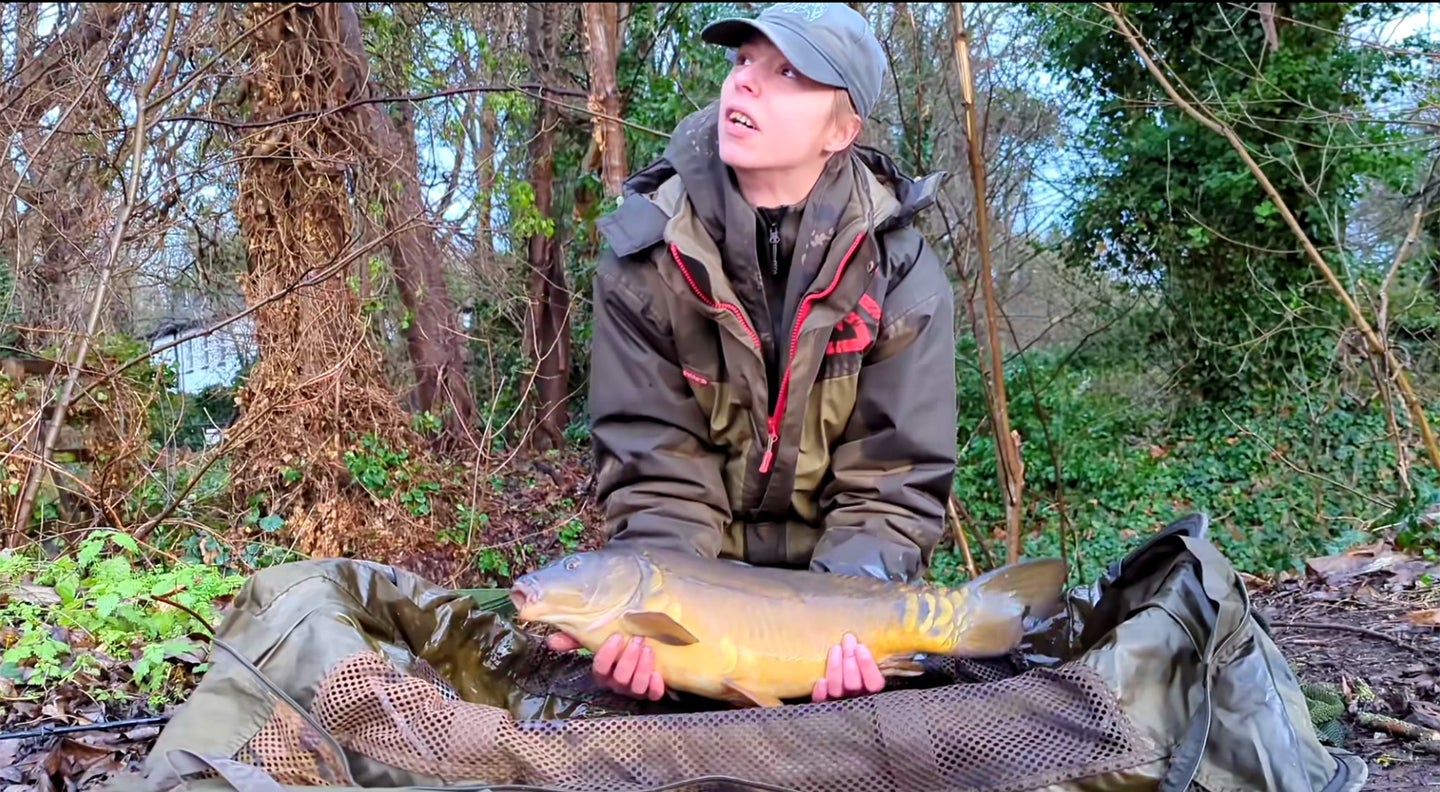 Elsa Jones looks up at the heckler while getting ready to release the fish. via Facebook
SHARE

Hell hath no fury like an old English woman who hates fishing. This was the lesson that British angler Elsa Joan learned earlier this month while dropping a line in Brooklands Lake, a popular and privately managed carp fishery in her hometown of Dartford, Kent.

The 24-year-old angler was practicing catch and release, and she was trying to video one of the carp she’d landed when she was confronted by a foul-mouthed critic. Joan posted footage of the encounter on Facebook, where it’s received more than 4,000 comments. Most of these commenters applauded Joan for keeping her cool while being verbally assaulted by an anonymous woman internet denizens have since dubbed the “Carp Karen.”

Joan’s minute-and-a-half video starts with her scooping a small carp out of a large, duffel-shaped landing net so she can show it off to the camera. Before she can pick the fish up, however, the unnamed woman walks past and immediately starts hurling insults.

“God, you are dis-GUH-sting,” she yells emphatically. “Put that bloody thing back in the water if it’s not dead already!”

Joan looks up with her mouth agape and says “go away” before issuing a polite “f*ck off”—a phrase that, to this author’s understanding, is used as a traditional greeting in the King’s English.

The woman continues laying into Joan, and her aggression ramps up from there. She calls Joan a “disgrace,” a “f*cking whore,” and a “vile bitch” as she accuses her of trying to kill the fish. She doesn’t seem to grasp the fact that Joan is planning to release the carp and is treating it carefully. Joan even pours water over its gills as she tries to fend off the woman’s profanity-laced insults.

“It’s a fishery,” Joan says repeatedly as she carries the live carp back to the water’s edge. “People go fishing, love. Go away.”

After saying that “I don’t care what a fishery is—an array is a matrix” (your guess is as good as ours), the woman tells Joan she deserves to be drowned. Her shouting then builds to a fever pitch.

“You don’t have to torture animals for fun!” she screams, her voice breaking with unbridled rage.

Something about the quizzical expression pasted on Joan’s face combined with the woman’s overwhelming ferocity makes the video seem like it was pulled from a second-rate comedy sketch. Joan has since spoken with reporters and she confirmed that the video was real and not staged. She said the carp was released back into the lake unharmed, and that she reported the woman to local authorities. Joan also told the New York Post that her heckler has not been seen near the fishery since.