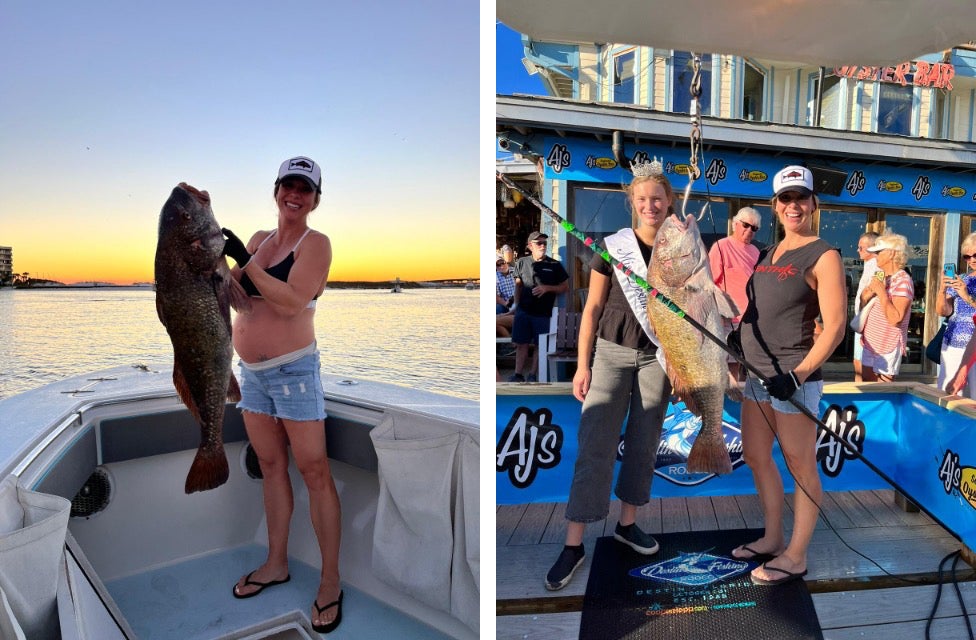 A potential new world-record black drum was speared by a Florida freediver on Oct. 1, during the first day of the Destin Fishing Rodeo. While spearfishing can be a challenging, lung-busting sport for even the fittest freedivers, 40-year-old Julie Augustine managed to spear the big drum while eight months pregnant.

Augustine, who works as a physician assistant at a psychiatric clinic in Destin, hadn’t planned to get in the water that day.

“I originally planned on going out because conditions were calm,” Augustine tells Outdoor Life, noting that it would be a relatively easy day on the water considering she was in her third trimester and prone to more nausea than normal on the water. “We were going out to scout some future dive sites.”

But as her buddy Captain Joe D’Agostino motored toward the dock to pick up Augustine, he spotted a school of drum in Choctawhatchee Bay. He called her to let her know she might want to bring her spearfishing gear.

“Do you want to go find a world record?” he asked.

Before pregnancy, Augustine would go spearfishing a few times a month. She continued to dive once she discovered she was pregnant—about a dozen times—but expected to stop spearfishing as she approached her due date. Augustine, who has taken freediving courses, normally can hold her breath for up to two minutes while spearfishing. Pregnancy has reduced her lung capacity, and she tops out at about a minute.

“Luckily, I’ve had a very healthy pregnancy and I’ve just been listening to my body and making sure I follow my obstetrician’s advice,” says Augustine, who had planned to stop spearfishing around the fifth month of her pregnancy. “That was the ending of the summer red snapper season, and I just made the assumption that it would probably be too uncomfortable to dive [at five months] and I probably wouldn’t fit in my clothes, and I just made a lot of assumptions that turned out not to be true.”

The D’Agostino and Augustine located the school again at a depth of 8 to 10 feet. While visibility was good on the surface, says Augustine, it was much more difficult to see fish once she entered the ocean. Rather than using a speargun, Augustine was fishing with a primitive 9-foot Bermudian slip-tip pole spear, which has a range of roughly 10 feet. She couldn’t see the tip of her spear through the murky water. It was also difficult for her to actually dive underwater.

“It was just a buoyancy and weighting issue—I hadn’t adjusted my weight belt to accommodate my eight-month pregnancy, so it was actually really difficult to get horizontal,” says Augustine, laughing. “Originally I was kicking a little too vertical. The fish didn’t scatter but they stayed away. But when I was able to get horizontal and drop enough underwater to hunt, that’s when one came in closer. I could see enough of its shadow to tell it was fairly big. I didn’t think that it was the biggest of the group that I saw, but I could tell it was a really sizable drum. I aimed, took a shot, and it was a great shot.”

The drum didn’t tear out, and Augustine was able to boat the big fish.

Read Next: PHOTOS: Spearfishers Shoot Thousands of Pounds of Carp from Lake Powell

Suspecting it might be a spearfishing world-record, Augustine called her friend who works at the Destin Fishing Rodeo, which runs from Oct. 1 to Oct. 31, to ask about using their certified scales to weigh the fish. The pair boated back to shore and the black drum tipped the event’s certified scales at 37.6 pounds. (Although other outlets have reported 37.8 pounds—a reporter from the Destin Log first broke the story—Augustine thought the scale read 37.6 pounds for longer and opted to be conservative in the measurement.) Its girth taped out at 28 inches.

Augustine is submitting her fish for certification with the International Underwater Spearfishing Association, which manages records for spearfishing. (The International Game Fish Association only keeps records for fish landed with traditional tackle.) The current world-record black drum in the Women’s Sling/Polespear category weighed 36.3 pounds and was speared in the U.S. by Lucie Cardet in 2018. The record black drum in the Men’s division, speared in 2014, weighed 50.1 pounds.