Can we wade and fish public waters that run through private land in New Mexico? That will be up for the courts to decide 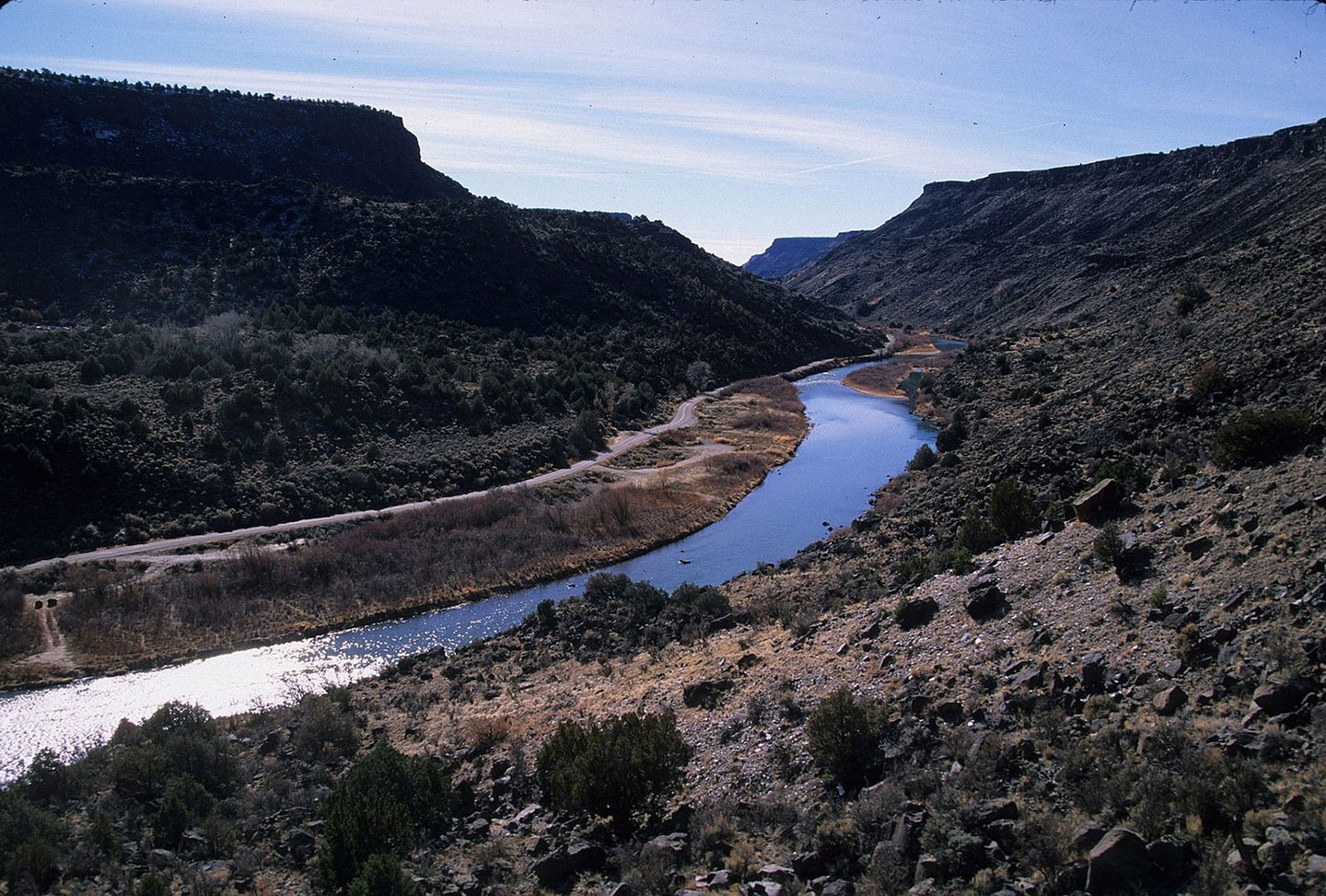 The Rio Chama in New Mexico. The Bureau of Land Management
SHARE

In New Mexico right now, no one knows for sure if they can fish public water running through private land.

This comes after a lawsuit last week that the director of the New Mexico Game and Fish Department filed against the Game Commission asking a district judge to decide: Can private landowners exclude fishermen from publicly accessible waters?

The former head of the Game Commission, Joanna Prukop, tried finding a resolution at the end of last year. But midway through the debate she was not reappointed.

Sportsmen’s groups say big, out-of-state money is behind the push to privatize public rivers flowing through private land. They say the New Mexico Constitution and a following supreme court case give public anglers access to bottoms of rivers. They say the commissioner was let go because she tried to sort it out.

An attorney for private landowners maintains the opposite. He says the Constitution and that very same supreme court case give anglers access to water, but not to banks and bottoms.

The governor’s office, for its part, said Prukop was not reappointed for style and policy issues, not the politics around water access.

Ask Prukop though, and she’ll tell you: “Hell yes, it was political.”

Before diving into the recent muddle, a little background. The New Mexico constitution says that water in the state belongs to the public. In its own words: “The unappropriated water of every natural stream, perennial or torrential, within the state of New Mexico, is hereby declared to belong to the public…”

But as always happens with controversial topics like water, what, exactly, that meant landed before the New Mexico Supreme Court in 1945 in a case where a company tried saying the public couldn’t boat on a publicly accessible lake on its property because it owned land on both sides.

The Supreme Court decided in favor of anglers and said “the waters in question were, and are, public waters.”

And so life went. Until, for some unexplained reason, likely in the ‘80s, a New Mexico Game and Fish fishing brochure stated that anglers had to obey “no trespassing” signs and could not fish streams running through private property without written permission.

The exact language read that a person is trespassing if they enter “private property that is legally posted and they do not have permission to be there. This includes streams and river bottoms located on private property.”

While it seems like this should have been tested – someone would have been cited for trespassing then fought the ticket in court – it wasn’t. Some waters were simply marked off limits, so people didn’t fish there or were blocked by fences.

Boaters floating down rivers with barbed wire fences strewn across got used to using their oars to lift up the wires, skirting underneath. Landowners bought and sold property along rivers like the Rio Chama, Rio Penasco, and the Pecos River, assuming they were private. Some sunk millions of dollars into habitat restoration work, still assuming those stretches were private.

But then in 2014, the New Mexico attorney general wrote an opinion saying “A private landowner cannot prevent persons from fishing in a public stream that flows across the landowner’s property, provided the public stream is accessible without trespass across privately owned adjacent lands.”

And then came the firestorm.

Public water anglers cried victory, believing they now had the right to fish public waters that ran through private lands. Private landowners panicked, some saying their property values plummeted and fretting the opinion could lead to armed confrontation between anglers and landowners, said Marco Gonzales, a Santa Fe attorney who represents landowners in the state.

New Mexico lawmakers responded with a bill greatly restricting the public’s right to walk or wade on river beds through private land. The bill was lobbed back and forth before ultimately stating that no one can walk or wade on private property through a “non-navigable public water” without permission. It passed the New Mexico House by only one vote.

The head of the Game Commission at the time then wrote a rule outlining how to define a non-navigable section of water, then Gonzales filed five petitions on behalf of private landowners to keep their stretches private. It’s this Game Commission rule that the New Mexico Wildlife Federation, New Mexico Chapter of Backcountry Hunters and Anglers and Adobe Whitewater Club have asked the state Supreme Court to rule as illegal.

Gonzales said all the statute did was formalize what had already been a Game and Fish policy.

The public never had the legal right to walk and wade on stream beds through private land in New Mexico, he said. A U.S. Supreme Court case from 2012 called PPL v. Montana supports him, that landowners own private land under the river. Those attorney general opinions, he says, carry no more weight than any other lawyer’s opinion.

So in late 2018, the commission voted to certify all five stretches non-navigable, rendering them private, and up went signs.

In 2019 a new governor and new Game Commission head, Prukop, knew stream access needed a resolution. She felt the Commission was asking their wardens to enforce laws that were unconstitutional. So the commission decided to look into the new rule and asked the attorney general for another opinion on whether the Commission’s rule was legal. The assistant attorney general wrote a letter saying it was not.

“My instructions from the governor, which I could not figure out how to do, was to make this win-win,” Prukop said. “And we failed to figure out how to make it win-win over what is apparently a black and white constitutional issue.”

On New Year’s Eve, Prukop got a call from the governor’s office saying she would get a letter stating she wouldn’t be reappointed. Prukop, and much of the sportsmen’s community in New Mexico, were shocked. As a game commissioner, Prukop was an expert in her field – the first female division chief with New Mexico’s Game and Fish Department, a Cabinet Secretary for Energy, Minerals and Natural Resources and a member of the national Wildlife and Hunting Heritage Council.

She wasn’t given a reason on the phone, but then a story came out in the Santa Fe New Mexican newspaper, saying it was about differences in “policy and style.”

Dan Perry, a Texas and New Mexico lawyer represented by Gonzales, owns Trout Stalker Ranch, one of the properties with a successful petition to be non-navigable, formed the New Mexico Habitat Conservation Initiative based on “protecting private property rights and promoting conservation stewardship,” the Albuquerque Journal reported in 2016.

The paper did a deep dive into political donations and found tens of thousands of dollars in political donations to “Republican-affiliated political action committees,” though Perry also said he would donate to Democrats. “We want to maintain that law,” he was quoted as saying. “That’s one reason we set up the initiative.”

Prukop is ready to see this through, though admits she no longer has a dog in the fight. She has a letter to her signed by New Mexico Sens. Tom Udall and Martin Heinrich and Rep. Deb Haaland saying that “ensuring the public’s access to our land and water ensures our communities thrive economically and socially.”

But Gonzales argues just the opposite. This isn’t a case of landowners taking a right from the public, he says, it’s about the public asking to take private land. It’s not legal, he says. The 1945 New Mexico Supreme Court case so often cited didn’t say that the public has a right to the bottom of the stream, it just says the public has a right to the water itself. Neither he nor his clients are saying the public can’t raft or float and fish through private land. They just can’t get out and walk or anchor and fish.

So who is right? That’s up for the court to decide.