Buy a Hunting Dog that Suits You (and No One Else)

Don’t listen to naysayers and know-it-alls. Do the research, and pick the right pup for your pursuit 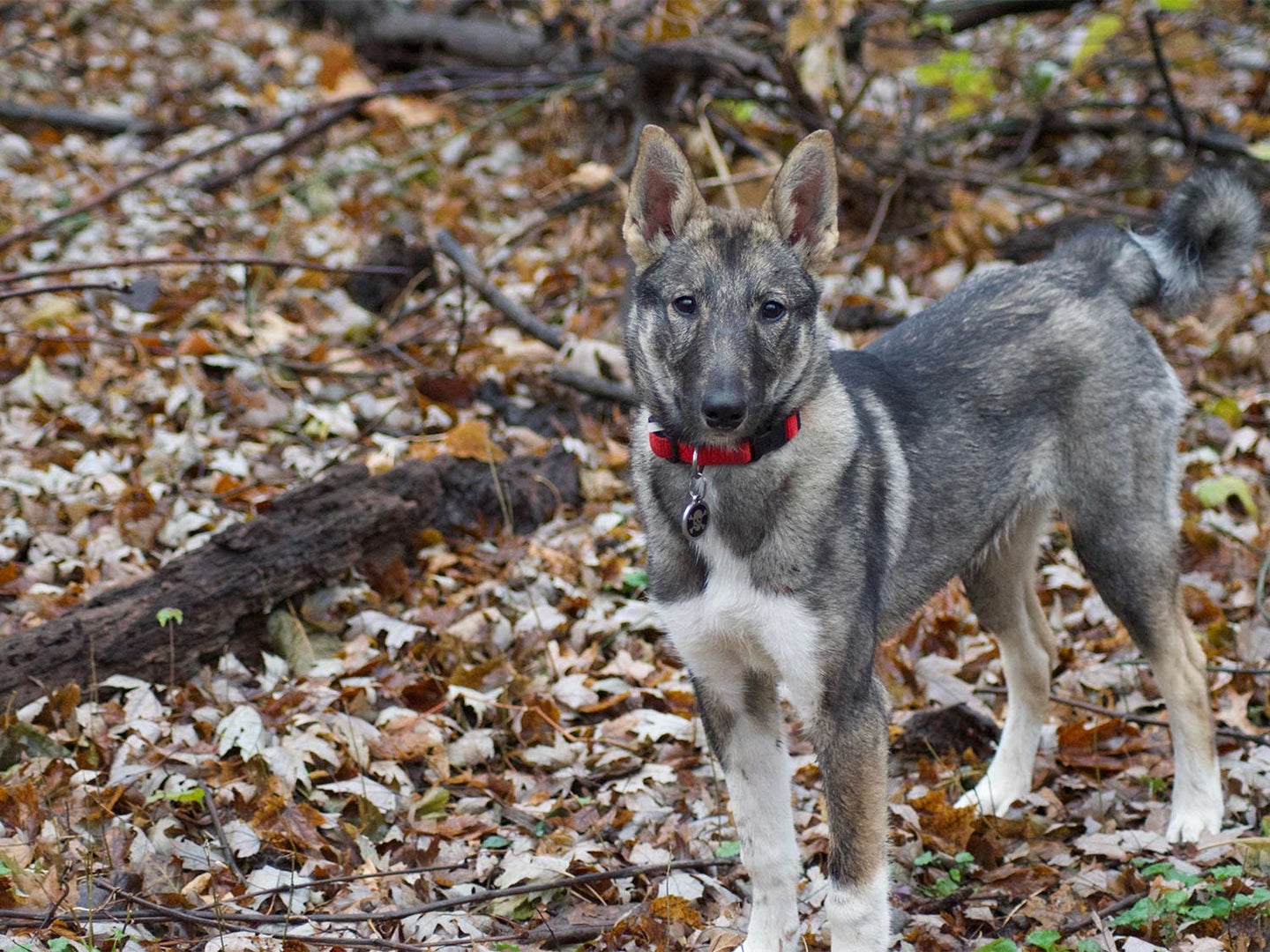 It was a rainy morning in November and the small stand of public timber was filled with deer hunters. I typically come to this spot during the week, but this was a Sunday and the mud hole that doubled as the parking lot had four trucks parked in it. For a second I thought about turning around and going home. I hate when other hunters show up in the public places I hunt, but I had woken up at 5 a.m., driven an hour to a place I knew had squirrels in it, and felt like there was a good chance my little West Siberian Laika 4-month-old pup, Vladimir (we had to give him a Russian name), would tree his first one so that I could shoot it.

He had been running down squirrels on a trail near the house for the last month, and was seeing foxtails and grays I wasn’t, so it seemed like the right time to hunt for real. My only reservation was he had not been exposed to gunfire yet. I talked to a dog handler friend about gun training him, and was a little apprehensive about shooting around such a young pup. I clapped loudly and yelled when Vlad wasn’t paying attention many times. He never once flinched or even seemed to care. So I decided to shoot a 20-gauge that I knew wasn’t overly loud.

Since my deer hunting friends were deeper in the woods (I presumed), the two of us kept to the perimeter, walking quietly through cuts where water seasonally floods the forest floor. We were coming to the end of the timberline where it opened up to agriculture fields and waterfowl habitat. And just as I was about to turn Vlad around, his ears perked and he bounded forward. Laikas are more like coyotes or wolves in their movements. They’re nimble, not like a block-headed British Lab (which I love, too) that bulldog their way through anything that stands between them and a dead mallard. And when he reacted that way, I knew he was on some kind of animal.

Two squirrels flushed from cover up into an old oak tree. One scurried high, but the other didn’t. And though I knew my deer buddies would be pissed, I raised the gun and shot a fat male fox squirrel. He fell from his perch, and Vlad rushed to it, clenching the fur in his sharp little teeth. I quietly said, “Good boy,” over and over again, petting him on the head and neck. I was excited, and also relieved and vindicated. Several people questioned my decision to buy this particular breed of pup.

You likely have never heard of a Laika (I certainly hadn’t until reading a story about them). And the unknown often leads folks to question or distrust things—particularly gun-dog enthusiasts, who are as loyal to their breeds as Tom Cruise is to L. Ron Hubbard. But when you decide what hunting pursuit best fits you, and you want a dog by your side, you just need to do the research and stick to your guns, no matter what others (even so-called expert dog trainers) think.

Why I Chose a Laika

I grew up duck hunting with my dad, and that’s continued to be my passion as an adult. But as much as I love mallards in the sunshine, there aren’t too many days like that left here in Illinois, so I ruled out dropping thousands of dollars on a retriever. I just didn’t see the point in spending all that money and time training a Lab so it could pick up 40 ducks a season. I also have a 7-year-old boy, and the simplest way to get a kid in the woods is to take him squirrel hunting. So I initially thought of getting a mountain cur. They are awesome squirrel dogs, and I have hunted over a few very good ones. The problem is most of them are big runners and, since I have a boy who likes to take breaks every 10 minutes to talk to me about the latest updates to Fortnite, I needed a close-ranging dog, which Laikas are known to be.

I also wanted a dog that could hunt other game, and Laikas will hunt virtually anything you kill in front of them. I doubt he will be a great duck dog. But I can still take him duck hunting and not worry that he will be in the way or get into trouble. Plus, he howls when we all blow our goose calls, like he is trying to help us trick geese into the spread, and that’s priceless in and of itself. My hope is to get him retrieving doves, and running rabbits. As he gets older, I want to hunt him on hogs with buddies in Oklahoma, run down coyotes in Kansas, and get him to track all manner of game.

What really drew me to Laikas is you don’t have to train them to hunt. You get basic obedience down, and then you’re off to the races. They learn to hunt on their own. I just walked Vlad every day in the woods of a trail or a nearby golf course. Both have an abundance of squirrels, and that’s all he needed. Prey drive is built into his breed and, intuitively, he went after squirrels from Day 1. The first Laikas lived in the cold and snow of Siberia and, for the most part, their owners did not feed them. They hunted on their own and the ones that didn’t died. So that primal need to hunt is still very much in the bloodlines of well-bred Laikas.

“You Bought What Kind of Dog?”

Some of the most knowledgeable breeders and trainers I know were unfamiliar with Laikas. I could hear the disdain in their tone. “You’re getting a what?”

One pro I spoke with who has trained plenty of great gun dogs told me I shouldn’t buy one of those “weird breeds nobody has heard of.” Then she advised me to get a Jack Russell Terrier. I told her if I wanted another ankle biter I’d ask my wife if we could have a second child. Nothing against you JRT lovers. I think it’s a great breed for the right person. Alex Brittingham is a dog trainer who has done a lot with that breed. Her little dog Gator is famous among duck hunters. He’ll retrieve just about anything she shoots.

But JRTs have the canine equivalent of a Napoleon complex. They yap and annoy you and run around in circles endlessly. I wanted a dog with speed and agility, that was built to hunt anything. And Laikas can do that. In Russia, they hunt moose, bear, boar, and many other types of big game. If I want Vlad to learn to hunt mountain lions, he will be capable of that as an adult. JRTs can’t bay or tree an apex predator. At least, not without getting eaten, they can’t.

I did the research, reading about the Laika breed extensively and talking to the folks who knew the most about Laikas. I found out there were only a handful of breeders who offer good dogs, and to be patient and wait for dogs from their litters. In the end, I got lucky and a friend tipped me off that a dog from the man who brought the first Laikas to the U.S. had a pup.

But I don’t want to blindly champion the Laika, because this breed is not for everyone. They are very independent, and don’t need (and won’t take) as much instruction as some other working dogs. They also bark at everything, because they want to hunt it. Possum in the gulley…barking. Raccoon runs across the top of your fence…barking. You get the gist. They also need to be exercised a lot and hate being penned up or crated for very long. Vlad is in his pen at night to sleep, but the rest of the day he is on a 30-foot leash so he can at least explore a bit. We also go for a 2-mile hike or run each day, sometimes farther. But I knew all this going into it, which is my point. The people who told me to choose another breed honestly didn’t know anything about Laikas, and had no business instructing me to look elsewhere.

Stick to the Plan

For almost 10 years, I worked as an editor for a hunting magazine, so I was prepared to face the naysayers when I decided on an unconventional breed. Dog people are the best and worst kinds of people. They love their dogs, but some of them love those dogs to a fault. They can’t see beyond their cherished Vizsla or Griffon (pronounce it grif-ON, if you don’t care to be corrected), which is fine as long as they don’t project those beliefs onto others. But often dog people can’t help themselves. If they love a breed, all others pale in comparison. But if you’re looking for a dog that hunts the way you want it to, the breed doesn’t matter, as long as that dog is capable of doing what you ask of him.

For example, my friend has a brute of a silver Lab that’s a fine upland hunter. He is not stylish, and not pure bred, but a damn fine bird dog none-the-less and a joy to walk behind. When she posted a few pics of them hunting, some well-to-do dog people didn’t like that she owned a silver Lab, because that breed doesn’t have “true retriever bloodlines.” Which is preposterous. The dog hunts. It obeys. It does everything she wants it to do.

And that’s what you need to look for in your next gun dog. Don’t get caught up in what others say you should buy or be best for you, because they aren’t going to be with that dog every day for the rest of its life—you are. So consider what breed will suit your hunting style best, find a good breeder, and stick to the plan.