How to Be a Casual (and Ethical) Snow Goose Hunter

Snow goose hunting pushes waterfowling to the extremes, except when it doesn’t 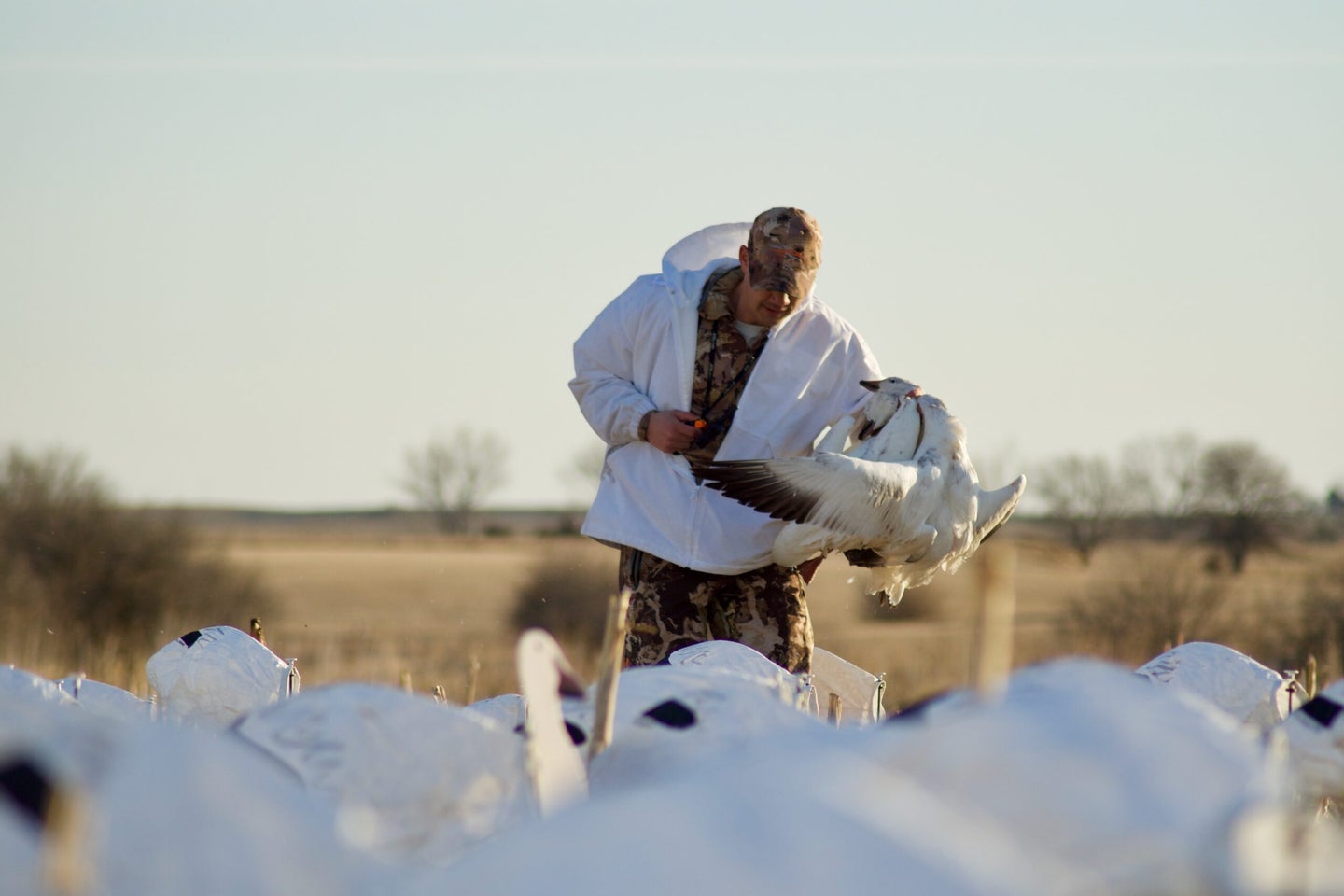 You don't have to be a hard core snow goose hunter to enjoy it. Joe Genzel
SHARE

Serious snow goose hunters make up a strange subset of the waterfowling world, which is already its own weird subset of the greater hunting community. Everything is taken to the extreme in snow goose hunting. Bigger spreads, more shotshells, massive flocks of birds flying north on a shorter migration window, and yes, sometimes larger piles of dead geese at the end of the day. An outsider might look at snow goose hunting and assume that he needs a trailer full of 3,000 decoys, an extended magazine tube that holds six extra rounds, and an expensive electronic caller—and then spend a month during the spring conservation order scouting and hunting to actually kill snow geese. In some ways, this assumption is true. If you want to be a consistently successful snow goose hunter, then you’ll have to go all-in on the lifestyle.

There are no limits on snow geese during the spring conservation order in the U.S. (because the birds are overpopulated and damaging their arctic nesting grounds) and a sort of kill-em-all mentality has seeped in. In an inevitable quirk of human nature, because there is no limit on the number of birds you can kill, people get obsessed with the numbers of birds they shoot—especially after seeing 100-bird days posted on social media. This pushes some folks to call longer shots, scraping a few birds out of a high flock even if others might get wounded. At worst, there are the roost jump shooters who waylay 100 geese (or more) on water in matter of seconds, even when ducks, Canadas, and specklebelly geese might be mixed in as collateral damage (breaking federal game laws). All of this often gets rationalized because the birds are overpopulated. But in reality, even increased harvests of light geese aren’t having the desired impact on populations.

To be fair, this type of bad behavior is often conducted by the most undedicated and under-educated snow goose hunters. Many of these folks haven’t put the work in, they don’t understand the birds, and they don’t fully understand the ramifications of their actions.

You might not like to hear it and I almost don’t like to write it. But for most folks, DIY snow goose hunting (at least successfully) is not a realistic option. And in this case, hiring a guide is actually going to be cheaper than trying to hunt snows over decoys yourself. But this is not as simple as just Googling “snow goose hunting guide” and picking the top link. Many of the largest and most well-known snow goose operations don’t offer the best hunting experience for the workaday hunter. In these higher end operations, you’ll be paying for nicer accommodations and better food, but not necessarily more shooting. Plus, some of the traditional snow goose hunting destinations (like Mound City, Missouri) just aren’t seeing the consistent hunting like they used to. Going with a more affordable guide who hunts in a less pressured location is a better bet these days (but it’s still a bet). Think Kansas, Illinois, Indiana, Nebraska, and Iowa. You’ll be looking at rates around $200 to $300 per day. You’ll likely be tossed into a group with some other hunters. If the guide says something like, “let’s pencil in dates and I’ll let you know if we have birds,” you’re on the right track

You’re likely going to see geese, and you very well might see a lot of geese. Big flocks will work the spread and then slide off. They’ll hang over head at 100 yards and never commit. This is all typical in snow goose hunting, so expect it and don’t get frustrated when the first group of 200 doesn’t commit. Keep in mind that no one can guarantee a good snow goose shoot. Your group might kill 100 or three. Either way, go with the flow and enjoy the hunt for what it is.

Let’s be honest, most snow goose hunters are tag-a-longs. There are a few insane guys that love to chase this reverse migration from Arkansas to Saskatchewan (when the border is open) and the rest of us are there to luck into a good shoot. There’s nothing wrong with being that guy. I’ve done a majority of my snow goose hunting in this manner. Some of my good buddies love to hunt white birds for weeks at a time, and I roll in when they tell me it’s getting good. But I make damn sure I treat them right, because I’m not doing much more than showing up.

Most of my friends run permanent spreads in a known flyway, which is what I recommend for most of you. It’s easy. The decoys and tornado machines are set. You just have to jump in the pit, bring a few extra boxes of shotshells for your hosts, and a bag of your best deer sticks (leave the freezer-burnt sea duck jerky at home) for all to enjoy.

If you’re chasing the X each day, go above and beyond to set and pick up decoys. Most buddies won’t let me do this, but I always offer to pick up the entire spread in the evening and let them go scout for the next day or just get some sleep. Don’t act like you have to take an important call from your boss or wife or husband while everyone else is doing the work. You came to hunt and loading the trailer is part of it.

Anyone can get invited to snow goose hunt once, but if you want to keep coming back, you have to pull your own weight (and then some). Whatever birds the group kills, offer to help clean them and take as many as you possibly can home (snow goose makes a fine meat stick or grind for chili). Die hard snow goose hunters who have been at if for weeks will already have more than enough birds in the freezer. They’ll be thankful for you cleaning geese and taking them home. If you’re staying at a friend’s house, pay for a dinner or two. Clean up after yourself. Do anything you can to make their life easier and it will guarantee you a spot next year.

If you don’t already have snow goose hunting buddies, you might be surprised to find out how easy it is to make some. Ducks Unlimited events and even Facebook groups dedicated to snow goose hunting are fine places to start. If you’re willing to scout (helping to find feeds and get permission to hunt from landowners), you’d be surprised how many crews would be willing to bring you in for a hunt or two.

Hunt Snow Geese on Your Own

Still want to go it on your own? Just you and the dog? It’s not impossible. If driving backroads for days, talking to landowners to get permission, and busting your ass to set a spread sounds like fun, well, then you’re probably signing up for the right hobby. Start by reading this article on how to DIY hunt snow geese.

If you are going it alone, hunt exclusively over socks. They don’t have the appeal of full bodies, but you can afford 1,000 of them and they will all fit in the bed of your truck. You likely won’t fool massive flocks of adult birds with these decoys, but you can pull small packs of juvies away, and sometimes the adults will follow. Also, try and target water. Most snow geese will at least give you a look if you have decoys out on a pond or small watershed. You can have success with these smaller spreads, but you should recalibrate what your idea of success is. Most duck hunters are thrilled with their limit of six birds in a day. A solo snow goose hunter ought to be just as thrilled with six hard earned birds.

And remember, you may see folks on social media or Youtube standing next to piles of dead birds, but that’s not reality. Your typical snow goose guide is going to average 20 to 40 birds per day. Is it cool to shoot into tornadoes of white geese? Yes. But most serious snow goose hunters understand that if you get a few small groups of birds in tight every hunt, as opposed to skybusting snows at 100 yards in hopes of raining out big numbers, it’s a damn good day. If that sounds about right to you, then welcome to the club.