Scout diligently to get your limit of municipal geese this season. 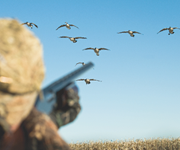 Many of America’s goose hunters live under a curse of abundance. Tens of thousands of Canada geese have stopped migrating, finding all the food and shelter they need in and around urban areas. The curse‚ and one reason for these pockets of abundance‚ is that hunting is prohibited in many of these areas.

But don’t write off these urban sanctuaries just yet. Many cities are bordered by big rivers that don’t freeze in the winter and agricultural areas where geese go to feed.

Intercepting birds as they use these pieces of habitat’ and cross city limits into rural areas’ is a starting point for a winning late-season waterfowl strategy.
**
Scouting Urban Zones**
Scouting is important with any waterfowl hunt, but it’s crucial when you’re hunting urban geese. Because the birds are concentrated in a few select areas, you cannot set up in just any field near any river and expect success. You must set up at the place along the river where they are roosting, or in one of the fields where they are feeding.

Fortunately, this isn’t as hard as you might imagine. During the afternoon, most geese are on the roost. Municipal bridges provide a great vantage point from which to look up and down rivers for roosting geese. Once you find birds, the next task is to find the fields they are using.

During the late season, most geese leave the roost from late in the afternoon until about one hour before dark to feed. If you wait for them to lift off, you can often follow them in your truck to the fields they are using.

Following the birds will not only pinpoint what time they leave the roost to feed, but also what sorts of forage they prefer. Cut corn is almost always the field of choice for late-season geese, but other harvested crops like soybeans, wheat and barley will attract cold-weather honkers looking for easy calories.

Knowing the roads is helpful when following birds, but if you can’t talk your hunting buddy into navigating or spotting, use a GPS unit to keep track of turns and landmarks. And give Google Earth a try. The satellite imagery program will help you locate potential fields from a bird’s-eye view.

Once you have the birds patterned, you’ll need to get permission to hunt, but that’s not as tough as it can be in hard-hunted rural areas. Typically, farmers near urban areas are so inundated by nuisance numbers of geese, and so infrequently approached by hunters, that getting their permission can be the easiest part of your hunt.

Calling and Decoying
Lighten your load by leaving all of your large spreads at home. In fact, you can still take a limit even if you don’t own a single decoy.

Remember, if you have found the location within a field that the birds are targeting, there is a good chance the birds will return to that exact location the next day at the same time. All you have to do is be there in appropriate camouflage, lie still and shoot straight.

While decoys are not necessary, a small spread of about one to two dozen can be used to help build confidence in the birds. I like to lie in with the decoys and conceal myself by pulling cornstalks over my body.

Use a call sparingly, only to hail the birds as they approach or, if needed, to finish them. Be patient and let your scouting do the work. No matter how proficient you are with a call, every time you blow one you risk giving away your true identity to birds that already want to land where you are waiting.

Perfect spring nesting conditions in the Arctic produced a bumper crop of snow geese this year, which means you can expect to see plenty of easy-decoying juveniles in southbound flocks this fall and winter.

If educated snow geese are your bane, don’t sell your rag decoys just yet. This may be a redemptive year.

Forecast: “This was a huge production year for snow geese,” Robert Rockwell, a waterfowl researcher at City University of New York, told Delta Waterfowl. High nest success means lots of juveniles in the fall flight. “Harvest always goes up when you have a high juvenile-to-adult ratio, and those puppies will suck right into decoy spreads.”

Timing: The first wave of geese left Hudson Bay a couple of months ago and is working south. Keep tabs on flocks and anticipate bird movement by checking out the migration map at storm chasersnetwork.com/map/.

Spring Shoots: By the time the snows winter on the Gulf Coast and start working back north, they will be wiser and warier, but should still provide some good gunning for early spring conservation seasons in the Central Flyway.