Don’t give up on the season yet. There’s still time to have one hell of a multi-species hunt on public ground 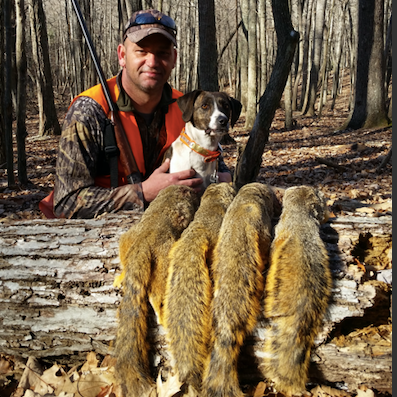 Late-season is one of the best times to be in the woods. Larry Case
SHARE

January and February are my two favorite months to be in the public hardwood bottoms along the Illinois River. I spent my youth duck and goose hunting with dad on the banks of this historic waterfowl flyway. But the birds don’t come here in the numbers that they once did, and with those days long behind us, and a new squirrel dog by my side, I’m chasing more foxtails and grays than ever.

I hadn’t squirrel hunted regularly since I was a kid, and forgot all that the woods have to offer this time of year. Depending on your state’s regulations and season lengths, there’s a fantastic opportunity to hunt multiple species on the same piece of property right now. You just have to do a little background on the site you want to hunt. Or, maybe you know a place well and just haven’t yet realized that it’s a damn fine spot to shoot an assortment of critters.

I can’t guarantee you will kill six different types of wild game on the same morning. And late season in the public woods is tough. A lot of hunters have utilized these tracts in the past few months, and that puts a lot of pressure on the animals. But now most of those hunters are gone, and that’s why you should be hunting. Here are some tips that will help you bag more small game this winter.

I’m looking to shoot squirrels and rabbits first during winter hunts. My dog runs out in front with his nose to the ground, trying to tree a foxtail or gray. While he is doing that, any brush piles or thickets I run across get a few swift kicks from my boot. The hope is that a cottontail will spring from cover and I will kill a bonus rabbit while the pup is chasing after squirrels. Sometimes he will scent-track rabbits as well, but he has yet to get on one and run it back to me (rabbits run in a circle pattern when they are chased if you didn’t know).

But you don’t need a dog to hunt either of these critters. Late in the year, neither species is going to move much, particularly if it is cold. Typically, they are most active early in the morning and later in the evening. Or if it’s really cold, the warmest part of the day (though sometimes they may not move at all to conserve energy). The key to killing them is patience. I like to find an area with oak trees (look for trees with some leaves still on the limbs if you suck at tree identification, like me). It’s also a bonus if you’re in a draw or gulley. Both species use them as travel routes.

Find a nice big log and just sit there silently. Walking around the woods late in the year—especially when there is crunchy snow on the ground—is no good. The critters are going to hear you coming. I like to sit for about 20 minutes. If a squirrel comes out and you shoot it, hold tight. Give it another 10 minutes. Another might try to scamper up a tree. When the 20 minutes is up, move to another location and repeat the process. Don’t get discouraged if nothing comes along. I get skunked plenty. This is a tough time to be successful on small game because they aren’t as active. But once you have some success it will make hunting early season seem like a snap.

I’ve found both species in many of the same places I hunt squirrels and rabbits. Ravines with water in the bottom are ideal. Sit near blowdowns or any logs that connect one side of the ravine to the other (they love using those for easier travel) Also, they both stick to heavy cover, which is why having a dog that can wind game is beneficial. My dog has treed a couple possums already and there’s no way I would have killed one otherwise because I could not see them until they flushed. They also don’t spook as easy when you get close like other wild game, which makes it tough to kill them.

Coons and possums are elusive critters mainly because they are more nocturnal than any other small-game species. If you have a buddy with coon hounds, I highly encourage going on a night hunt. Here in the Midwest it’s the closest I will ever get to hunting hogs or mountain lions behind dogs. And though it may not be as thrilling, it is such an awesome experience to hear a mountain cur bellow through the river bottoms when he is on a coon trail.

As waterfowl season rolls into its final few weeks, birds seek refuge. They are sick of being called to and shot at, and so they go to places no duck hunter will bother them. One of the typical locales you will find ducks and geese, particularly when there is a freeze up, are in timber-lined creek beds or small rivers with moving water.

There are a couple properties I target that have moving water running through them, and I always check those places. It’s a tough spot-and-stalk with no leaves on the trees and crunchy snow on the ground. But oftentimes there are so many mallards in the creek that it takes them all awhile to get out through the canopy. It’s rare that I get such an opportunity to jump shoot birds, and you will probably have a similar experience, but it’s worth it if you find an unsuspecting group of greenheads or honkers. Just remember, you can’t shoot them with lead, which is why I always shoot a non-toxic load when waterfowl seasons are still in.

Read Next: The Ultimate Guide to Hunting Squirrels

This winter, my dog flushed a hen rooster from cover as we were walking the timber line next to a field edge. There aren’t many wild ringnecks left in this part of Illinois, but it reminded me to seek out the only real pheasant habitat around here—cattails next to a frozen-over slough. If you ever see cattails, even if you don’t have a dog, walk through them. You may bust a bonus rooster. You may also get surprised by a ringneck when you’re kicking those brush piles trying to flush a rabbit. Be sure to wear blaze orange when upland seasons are in so you can legally shoot a rooster.

I also walk train tracks and the edges of agriculture fields (mostly cut corn) hoping to score a few doves. Train tracks usually have old power lines (or at least the wooden towers are still there) that winter doves sit on. And the cornfields are a no-brainer because they are a food source doves like to stick close to when seeds and grains are sparse.

This time of year you mostly see doves flying in singles or pairs, but many times they are all roosting or just hanging out in one tree, usually near a water source. There’s an area I hunt that I can count on doves being in the same spot about 50 percent of the time. It’s similar to hunting a covey of quail. If you happen to flush doves and don’t get a shot off, stay ready, because it’s likely they all didn’t fly off at once. You might get to pull the trigger on a few stragglers.

Get Ready For Spring

Even if you don’t kill a single critter this winter, it’s not a waste. This time of the year is good to be in the same woods you will turkey hunt come spring. Be looking for turkey tracks, feathers, and scat. Knowing the public tract better than the other guy will help you score a tom as well. If there are any kind of evergreen trees, take note of them. Turkeys love to roost there. Find flat areas at the top of ridgelines and pin all those locations on your phone.

Also, bucks are starting to drop their antlers, so you will get the jump on the competition—hunters and squirrels— for sheds. And a lot of small game species tend to be on the ground (not in trees) in winter, so keeping your eyes glued to the forest floor is doubly beneficial.