If confirmed, Haaland will be the first indigenous person to lead the agency 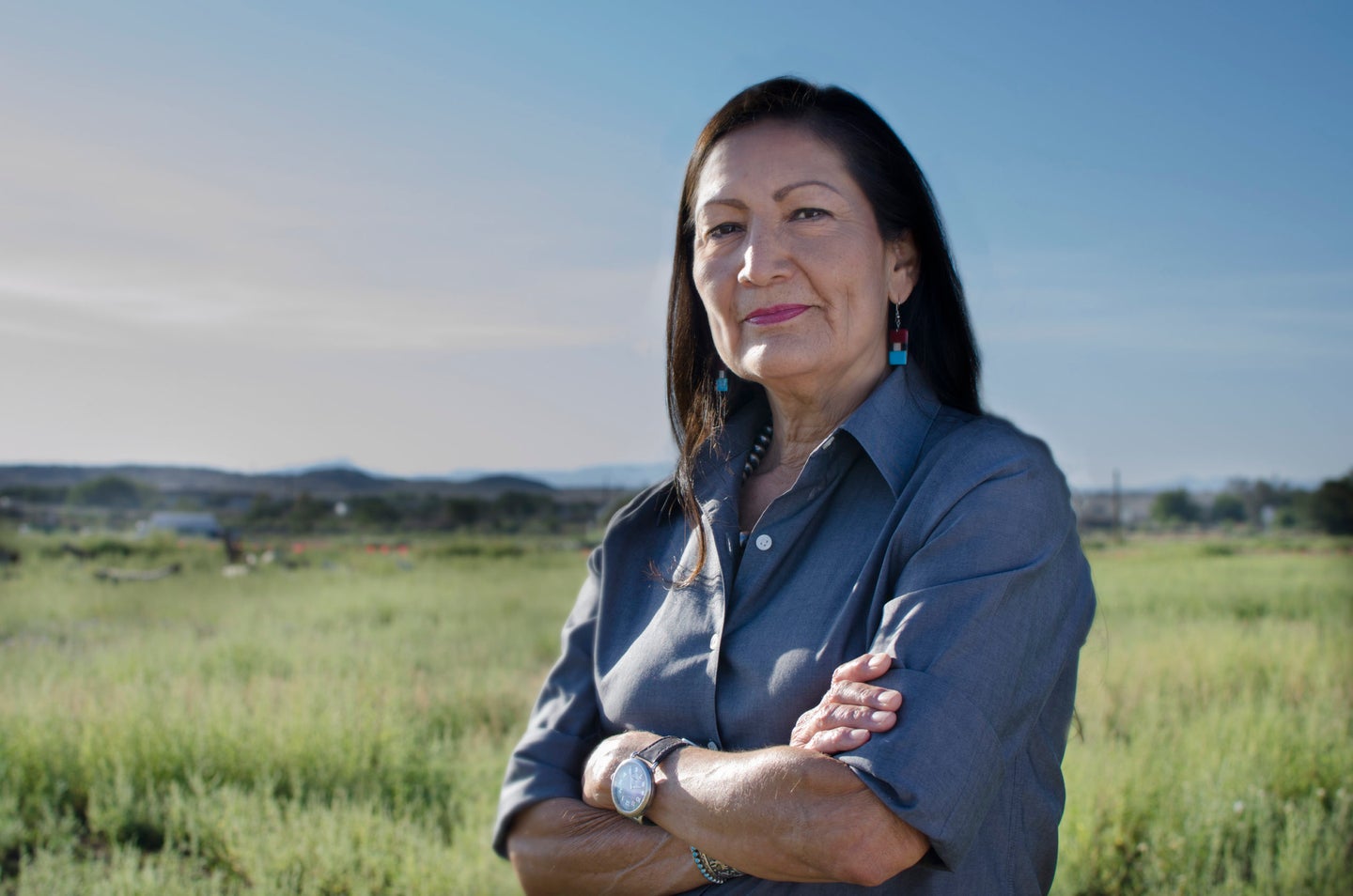 Congresswoman Deb Haaland is a 35th-generation New Mexican and a member of the Pueblo of Laguna tribe. Michael S. Anaya-Gorman
SHARE

Updated Dec. 17: President-elect Joe Biden has picked second-term Congresswoman Deb Haaland for his Secretary of the Interior, according to administration insiders. If Haaland is confirmed by the Senate, she would be the first Native American appointed to a cabinet secretary position.

A trio of New Mexicans were front-runners for the post, according to Washington insiders who spoke on condition of anonymity earlier this week. Most expected Biden to tap Haaland for the role, making her the first indigenous person to lead the agency that oversees the federal government’s relationship with the nation’s 574 recognized tribes. Haaland is an enrolled member of the Pueblo of Laguna tribe. She has represented New Mexico’s 1st Congressional District, which includes most of Albuquerque, since her first election in 2018.

“It would be an honor to move the Biden-Harris climate agenda forward, help repair the government to government relationship with Tribes that the Trump Administration has ruined, and serve as the first Native American cabinet secretary in our nation’s history,” Haaland said in a statement.

Both of New Mexico’s U.S. Senators were also being discussed as leading candidates to head the Department of Interior, which oversees some 500 million acres of federal land in the U.S., or about a fifth of the country’s real estate. Interior manages national parks, the Bureau of Land Management, the U.S. Fish & Wildlife Service, and the Bureau of Indian Affairs, in addition to dozens of other agencies regulating everything from energy and mineral development to invasive plant species.

Retiring Senator Tom Udall, whose father served as Interior Secretary in both the Kennedy and Johnson administrations in the 1960s, has been widely discussed as being interested in the Interior post. Stuart Udall, the patriarch of the family, was a beloved figure in America’s ecology movement. A passionate advocate for wild lands, species conservation, and restrictions on polluting industries, Stuart Udall remains an icon of Western conservationists, a full generation after his service.

A former congressman and two-term senator from New Mexico, the younger Udall announced last year that he would not seek a third senate term, the only incumbent Democrat to retire in this year’s election cycle. New Mexico’s junior senator, Martin Heinrich, was also on most short lists for the Interior position.

“There’s a lot to recommend both of New Mexico’s senators,” says one senior Interior Department employee, who spoke on the condition of anonymity. “Udall has worked closely with Biden in the Senate for years, and there’s a lot of nostalgia for the service that his father gave. But Heinrich is both younger and more energetic, and he has more connections with the environmental communities.”

Heinrich worked in environmental education and natural-resource management for most of his pre-political life. In the Senate, he sits on the Energy and Natural Resources Committee and subcommittees on energy, national parks, and public lands, forests, and mining and has been a leading voice for establishments of national monuments and landscape-scale conservation. He’s also a passionate hunter and angler who spends much of his off time in the field, hunting with his children.

The Interior Department source noted that while Heinrich has the edge in experience and temperament to lead the agency, Democrats are not eager to create an open Senate seat that would follow a Heinrich appointment.

“There’s too many unknowns about who might vie for an open seat, and the conventional wisdom is to not unnecessarily give advantage to the opposing party.

“That’s a story line that’s hard to dismiss: A Native American overseeing the agency that oversees Native Americans,” says another D.C. source. “In this era of inclusion and ensuring that groups that have been traumatized by the ‘dominant culture’ for generations are given a seat at the table, there is no bigger table or bigger seat than Interior Secretary. Haaland’s appointment would satisfy progressives who feel that Biden is being too safe by appointing establishment people to top posts. But she’s a long way from being a radical environmentalist, which would placate more conservative Democrats. She’s just a really good story.”

Haaland could hardly be described as an establishment pick. A military brat who moved frequently as a child, she’s a single mother who put herself through law school with student loans and the revenue she made from selling salsa. More recently, Haaland served as head of the Laguna Pueblo’s business development office and later as director of New Mexico’s Democratic Party.

Haaland’s selection will likely satisfy a number of indigenous activists who have petitioned for her appointment. Hollywood celebrities and left-leaning environmental groups have also been vocal advocates for Haaland.

As presidents have relied increasingly on using executive-branch fiat rather than undergoing the slow, torturous, and often frustrating route of legislation to achieve domestic priorities, the Interior Department has taken on an outsize role in conducting public-land policy. President Obama issued hundreds of executive actions to establish national monuments and expand authority of agencies. President Trump issued more executive actions than any other president, and Biden’s Interior secretary is expected to keep the streak alive.

“I’d guess, especially if the Senate stays in Republican control pending the outcome of the Georgia races, then you’d see a lot of effort to bypass Congress,” says one source. “That means more executive branch actions on things like expanding the boundaries of monuments—like Bears Ears and Grand Escalante [in Utah] that Trump curtailed. Probably more endangered species listings, more restrictions on what can and cannot happen on federal lands. And frankly, also more say-so on what happens in Indian Country.”