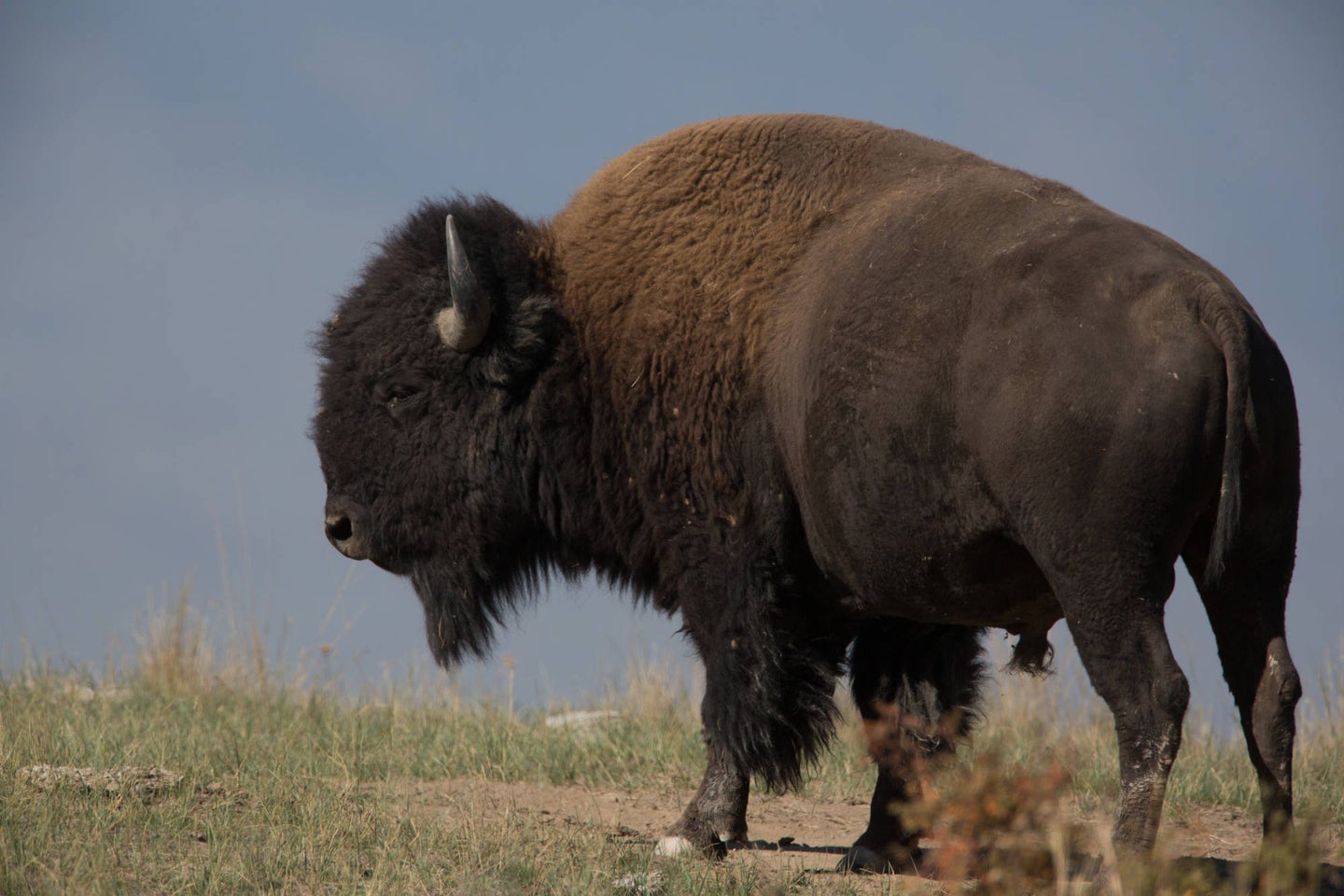 Bison are destroying critical water sources, diseased goats are running rampant, and pythons are squeezing biodiversity to death. What sounds like chaos at the zoo is actually a series of habitat disasters unfolding in our nation’s national parks. While the sporting community often accuses the National Park Service of preservation practices rather than conservation, some parks have switched gears. Lately, certain NPS mangers have called on skilled sportsmen and women to help control the non-native species currently threatening the biological rhythms of certain parks.

At the Grand Canyon, park biologists have prescribed lethal removal practices to save a fragile ecosystem overrun by bison. A non-native herd of hundreds of bison has crowded the North Rim of the park since the late 1990s, trampling vegetation and nearly exhausting the limited water sources. To help reduce the size of the herd and conserve the region’s native species, officials will begin recruiting experienced hunters next fall to participate in its controversial lethal removal program.

As many as 60 million bison roamed North America before white settlement and land grabs in the West whittled the population to a scant 300 head by the late 1800s. Federal troops, tourists, and hide hunters nearly eradicated the wild mammals, a critical resource for Native American tribes.

By the early 1900s, former bison hunter and rancher Charles “Buffalo” Jones began to reintroduce bison populations. In 1906 Jones carted 86 of them from Kansas to Arizona, as a ranching experiment to crossbreed with cattle. Though his attempt was a bust, the bison herd grew and meandered between the House Rock Wildlife Area and Grand Canyon National Park. Since 2009, however, the House Rock herd hasn’t wandered beyond the boundaries of the park. Hunting pressure from regulated hunts on adjacent U.S. Forest Service land has kept them on unpressured park ground.

Jones’ legacy is the 400 to 600 bison that wander the North Rim of the park, which has the potential to grow an estimated 1,200 to 15,000 individuals in the next decade. Yet biological surveys have found that the area’s ecosystem can only support 200 bison. Park management is concerned that the bison herd has already significantly changed the composition and diversity of vegetation of the North Rim, and are poised to damage the area beyond recovery without intervention.

To reduce the number of bison in the North Rim of the park, the Arizona Game and Fish Commission and the NPS agreed on Sept. 25 to collaborate on a lethal removal program. Volunteers hoping to help cull bison will be selected through a draw by the Arizona Game and Fish Commission in fall 2021. From there, the Park Service will select a limited number of qualified applicants who will be required to pass a shooting proficiency test.

“One thing that comes up often is, ‘Is it the same thing as hunting?’” Thomas says. “The answer is ‘no.’ Lethal removal is a management tactic to achieve that management goal of herd reduction. Hunters have more of an element of fair chase. You go out, you’re searching for a particular animal, you’re tracking that animal. In this case, the Park Service will be identifying the bison, and selecting individual animals for removal.”

Park officials also hope the lethal removal will encourage remaining bison to roam beyond the park’s borders. Additional volunteers on horseback will haze the bison in an attempt to push them out of the park boundaries.

Goats in the Grand Tetons

In recent years, calls for cull hunts to reduce stubborn non-native herds in national parks have become more common. In February, Grand Teton National Park contracted helicopter crews to eradicate its mountain goat population, which is competing with the park’s native bighorn sheep. The evasive animals live on craggy cliffs and in remote canyons, which are largely inaccessible to humans. The goats also carry pneumonia, which doesn’t affect the goats, but is deadly to the native bighorn.

The removal via helicopter evoked widespread criticism from Wyoming’s governor and animal rights groups. Due to the backlash, Interior Secretary David Bernhardt halted the operation after just one day.

Grand Teton National Park officials reimagined their strategy in August, when they called for qualified volunteers to trek through the Wyoming wilderness to cull the goats. Volunteers were instructed to assemble teams of two to six people and, within 24 hours, more than 240 teams from across the country had applied, according to Grand Teton National Park spokesperson Denise Germann.

A random draw selected just 70 of 240 teams from across the country for a weeklong cull in the wilderness. Similar to the Arizona bison cull application, the chosen volunteers were required to pass background investigations, physical fitness exams, and shooting tests.

During the cull, volunteers maintained contact with park management through radio and GPS, and used non-lead, copper ammunition. Teams were assigned to one of the park’s 10 geographic zones, each possessing unique terrain—and challenges.

“It took three hours to go one mile the first day,” says volunteer Jared Frasier, the executive director of 2% for Conservation and a Montana resident.

Frasier’s carefully selected team of self-described conservationist buddies were assigned to Zone 2, in the northern end of the park. It’s a treacherous area that contains Canyon Creek and the towering Mount Moran, and receives few park visitors.

“There were sections where we didn’t touch the ground for half an hour or more,” says Frasier “We were climbing over trees that it would take four people to put their arms around, old deadfalls that have been there forever. There are no trails in this section.”

Frasier is well-versed in goat territory. He has been on several surveys for the Rocky Mountain Goat Alliance to document the species and has hunted goats often over the years.

“They’re my favorite species, period,” says Frasier. “It was a surreal experience.”

But unlike a bucket-list goat hunt, volunteers were allowed to cull yearlings and nannies to reduce the breeding population. Each volunteer was allowed to pack out meat from one goat and donate any additional salvageable meat. After taking biological samples for park staff, any trophy parts (the horns and hides) were left in the Tetons.

“That’s not what, as a hunter, you plan for,” says Frasier. “But again, the project is population eradication. So that part was a bit of a mental hurdle. We had to wrestle with, that it’s a fact of the project, you’re removing one group to save another.”

Frasier thinks it’s more humane to kill the goats instantly than to let them pass pneumonia onto bighorn sheep, which will suffer for months. Through that lens, the idea of culling large numbers of invasive goats became more palatable. In the end, however, Frasier’s team did not kill any goats. The animals had positioned themselves on inaccessible shelves of canyons, and were quick to leave when the hunters got close enough for a shot.

While Frasier’s team did not encounter a single visitor in their week-long trek, volunteer Justin Walters was assigned to the Cascade Canyon area of the park, which is a popular hiking and climbing area. Visitors were notified that they would be traveling in a mountain goat removal zone. Walter and his team encountered nearly 100 visitors, many of whom asked them questions about their volunteer cull work.

“A lot of people still have so much curiosity that when they see the volunteers,” says Germann. “It was a really good opportunity for some dialogue about National Park Service management.”

Walters, a former seasonal park ranger, says it’s like “comparing apples and oranges” to confuse culling goats in the park with recreational hunting. These goats were unpursued and unpressured for decades, growing accustomed to the non-threatening presence of humans. But there’s still no “easy” way to scale 5,000 vertical feet, or try to locate goats in the fierce Wyoming wind. Walters’ team harvested a goat on their first evening and removed three in total.

“It was very challenging,” says Walters. “And I cried for the first time in years, just because it was all of that: it was so emotional, so physically challenging. Which I knew would be, just given the Tetons…There’re really not many places like Grand Teton National Park.”

Grand Teton National Park has removed 43 non-native goats, of the approximate 100 animal herd, since Sept. 14, says Germann. Management staff considers this a great beginning to a 3- to 5-year plan to eliminate the remaining goats.

Culls like the Grand Teton goat removal have proven effective, but many question the ethics of such management practices. Animal rights group PETA predictably condemned Grand Teton’s lethal removal practices, calling for relocation-only approaches. The Wyoming Game and Fish Department also criticized the initial goat management plan for the Tetons, though for different reasons. The use of “aerial gunning” was a poor solution, according to the WGFD, who wrote that, “having government personnel kill mountain goats from helicopters and leaving them to rot and be wasted is unacceptable. The GTNP’s refusal to utilize statutory options allowing skilled volunteers to harvest the mountain goats is shortsighted and sets a dangerous precedent.”

Grand Teton National Park adapted its plan, and recruited volunteers to help with lethal management. So why not allow hunting in national parks to prevent thorny—not to mention expensive—management crises like this in the first place? Because hunting is illegal in most national parks, and changing federal law to allow it would require Congressional action.

As a result, lethal removal is often the most logical solution for park management. Relocating animals is wildly expensive, whether that’s by airlifting elusive mountain goats or freighting two-ton bison. Volunteers are typically experienced hunters who are eager to help cull a bucket-list species and are, most importantly for the parks, a much more cost-effective solution.

Before the cull begins, Grand Canyon National Park is capturing and relocating bison to Native American Tribes through a partnership with the InterTribal Buffalo Council. ITBC receives grants and federal funding to help restore to help restore bison herds (or buffalo, as they’re called among tribal members) to the lands of their 69 member tribes. Since 2019, 88 bison have been corralled in the Grand Canyon’s North Rim and herded onto semi-trucks headed to tribes across the country. Bison serve a variety of purposes to the tribal community as a food source, including for elder nutrition programs and school lunches. Each year ITBC partners with new tribes that have a special cultural relationship with the bison.

“It’s an inherent right of tribes to access this food source and species,” says Megan Davenport, wildlife biologist for ITBC.

Though relocation is a win-win for both tribes and parks, Davenport notes that the transfers are extremely expensive. Especially at the Grand Canyon, which presents logistical complications because the North Rim roads are not accessible to semis. Transportation fees, veterinary services, and relocation personnel all add up.

ITBC receives funding through the Bureau of Indian Affairs, and ITCB is currently backing a bill to assist tribal governments in the reestablishment and management of buffalo on tribal lands. The Indian Buffalo Management Act would create a permanent line item and appropriate funding in the BIA budget for tribal buffalo restoration efforts.

For now, the park management’s objective is to reign bison numbers to 200 in the next three to five years. Excess animals not captured and relocated by ITBC will likely be culled. That’s where the volunteers come in.

If bison are allowed to remain at their current population in the North Rim—more than double the area’s carrying capacity—they will ultimately edge out the region’s native plants and animals and destroy the fragile ecosystem. But we have all the management tools we need to fix the problem, as long as we’re allowed to use them.