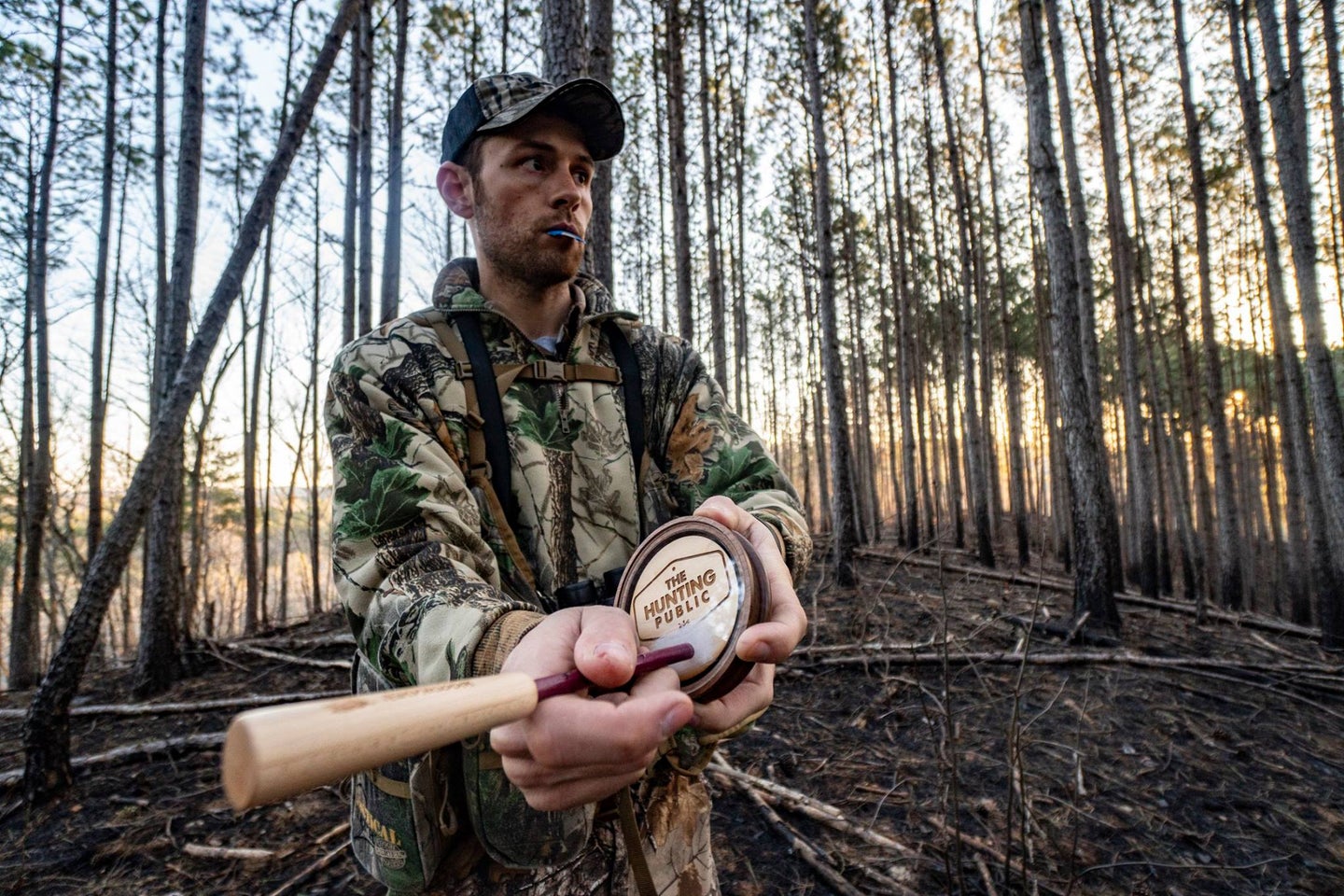 Calling turkeys takes practice, the kind of constant practice that annoys people around you who don’t understand things like the sound of a perfect yelp, or how a piece of roughed up glass and a stick can allow you to communicate with a wild animal.

Along with practice though, it also takes some good advice. To help, we’ve called on Aaron Warbritton of The Hunting Public. He’s the kind of guy who grew up going to the principal’s office for blowing a mouth call from the back of a classroom, and entered his first calling competition at the age of 16. When we spoke on the phone he rattled off the names of famous turkey callers as if they were the starting lineup to an NBA team, and when he’s not working on his calling technique, he’s probably out killing toms.

So, whether you’re new to calling or you’ve had a few turkey seasons under your belt, these tips should help hone your technique—and drive anyone within earshot absolutely crazy.

Make a Perfect Yelp with a Mouth Call

The ability to make consistent, realistic yelps with a mouth call is deadly, allowing you to keep both hands free to shoot. “Everybody blows a mouth call differently, so it’s hard to instruct somebody on the ‘correct’ way to do it,” Warbritton says. The main thing though is to focus on your breathing.

“I used to call with my lips to regulate the sound, I would open and close them a lot. When I started getting more realistic sounds out of a mouth call, I started using my diaphragm and actually not even closing my jaw all the way. I control air with my diaphragm and the back of my jaw or the back of my tongue. Nothing is done with my lips. My mouth is almost open.” Instead of blowing air through the call like he’s blowing out a candle, Warbritton tightens his stomach muscles, kind of like coughing.

“If you watch Matt Van Cise yelp during a competition, you’ll see his mouth is wide open. You’ll notice that his lips don’t close. That’s because he’s regulating all that air with his diaphragm, which is exactly what a hen turkey is doing.”

Warbritton says that whenever air leaves your mouth it should be vibrating the reeds in the call. “You don’t want to be wasting air. You don’t want to hear air slide past that call,” he says. Efficiency is the key, and that’s why it’s good to try a few different calls and cut styles to find which one works best for you. Once you find a good one, experiment until you don’t hear air hissing over the reeds.

On the other hand, it’s possible to have a call that’s too tight, that doesn’t allow enough air to pass through at all. This isn’t good either. “When you’re straining to make sound with a call, you have it positioned in the wrong spot, you’re just not moving air across it in the correct way, or maybe it’s just a bad call that’s stretched too tight,” he says.

“Move the call around in your mouth and your palette, and change the way that you blow air through there so that it takes very little air pressure to create a sound with those reeds.”

Lastly, don’t blow the same note over and over again. “Hens sound more broken. When they yelp, there’s a definite separation between the notes. They vary their tone and pitch almost every note, no different than the way we speak when we’re having a conversation.” Hens will also increase volume and inflection to create that back end rasp, and with practice, you’ll develop the same kind of tone.

Make the Most Out of a Friction Call

Warbritton likes using friction calls mostly to help locate birds, because the sound travels farther. “This works especially well, if you’re trying to strike a bird midday and you’re covering lots of ground. I’ve used a glass call over the years, and I really like it because it’s just louder. If I’m out on a road, for instance, with a bunch of wide-open space around me, and I’m just trekking through, trying to cover as much ground as possible, I use that glass call.”

But he also points out that you can pull more sounds out of a pot and peg than just locator calls. “You can do quite a lot by just changing the position of your fingers or the amount of finger pressure you’re putting on the striker.”

The way you hold the pot can change the way the call sounds too. And by using a combination of the two you can make everything from soft tree yelps, to purrs and kee-kees.

“If you’re holding the call fairly loose, it is going to vibrate more. If you tighten your grip on the call, it’s going to vibrate less, and that’s going to change the pitch of the call.” To make lighter yelps for turkeys that are in close, gripping the call with your palm close to the bottom and covering up the holes on the back helps. For louder cutting sounds, he suggests taking your gloves off and gripping the call farther back to open up the ports on the bottom of the call. Then pop the striker.

To make a kee-kee, pinch the striker close to the pot with pressure and drag it in a straight line across the call. This will make a whistle sound. If you want to make a kee-kee run, make the whistle sound and then loosen your grip for the last two notes and make a yelp. These sounds can be used to work birds that are close and far away.

Scratch in a Turkey

“Don’t think that calling turkeys always involves using a turkey call,” says Warbritton. When birds are close, he has had a lot of luck getting gobblers to come in by just scratching the leaves. But the most effective way the Hunting Public crew uses scratching is when they are walking to an area they know to have turkeys.

They’ll do what Warbritton calls a “scratch walk.” Instead of simply walking to his hunting spot as normal, he’ll drag his feet in the leaves scratching and sliding through the woods as he goes. While he’s moving, he’ll yelp softly on a mouth call too, to sound more like a feeding hen.

“We’ve had birds come in as we’re walking like that. I’ve looked up and seen a turkey coming toward us. We’ve had this happen to us several times when we were creeping into an area midday that we felt had turkeys in it, but they were just being quiet.”

The right conditions will extend the range of these kinds of calling techniques. “In midday, [scratching] is a good tactic because the sun is up, it’s dried all the leaves out.”

Scratching in the leaves also helps get a gobbler that might hang up at 50 to 100 yards outside of shotgun range. Wait until the bird gets behind a hill or tree and can’t see you, then scratch or throw some leaves. “The more realistic you can make that scenario sound, the better your chances are of bringing him in. If something seems a little out of place to him, that’s what will cause him to hang up at times.” Usually just a little more realism is all it takes to paint the picture and convince gobbler into range.