How to Tweak Surf Plugs to Catch Fall Striped Bass 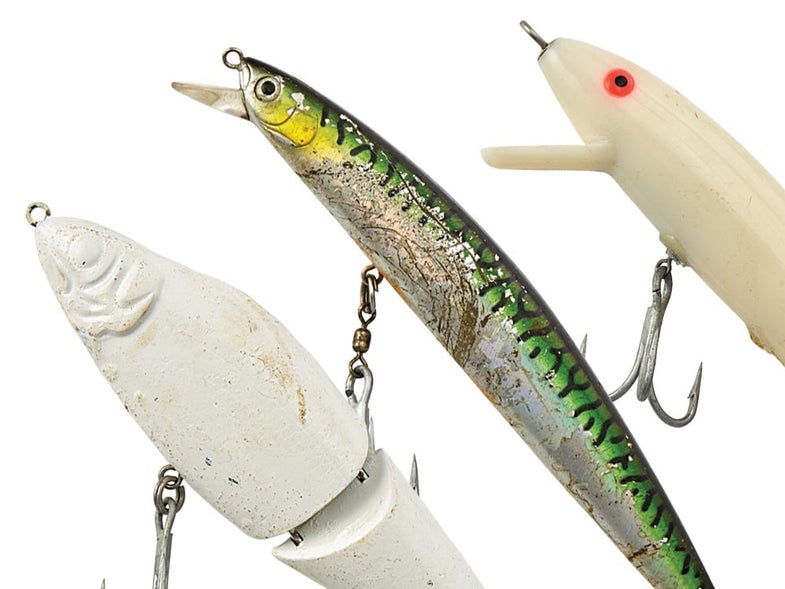 A cow striped bass is like an aging heavyweight fighter. It lacks the speed and showboating of bluefish or false albacore, so it relies on experience and raw power to drop surf fishermen to their knees. In addition to the haymakers delivered by the striper’s savage head shakes, a bass will lean on its rocky, current-swept environment to stack the deck even further. To KO a giant striped bass, every aspect of your tackle has to be as tough as your quarry, including your lures. While few lures are truly big-bass-proof right out of the package, clever surf casters have found ways to modify top producers to handle a heavy bass. Here are three easy tweaks to proven cow catchers, born from the ingenuity of anglers who spent a lot of time in the ring with giants.

Big stripers eat big meals, and one of the best ways a cow hunter can employ the big-bait, big-fish mentality is with the 9-inch, 5-ounce ­Sébile Magic Swimmer 228 SSK. The Magic Swimmer first gained popularity on the Cape Cod Canal, where fishermen learned there was no such thing as “too fast” when retrieving the double-jointed hard bait. As fishermen throughout the striper’s range began using the Magic Swimmer, they quickly learned that the stock hardware bent like paper clips under the strain of a huge bass. And fish attached by more than one of the lure’s three hooks could dismantle the bait.

The first step in improving the Magic Swimmer’s durability is replacing the tail hook with a hookless bucktail teaser (1). In addition to preventing stripers from gaining the leverage necessary for breaking the plug and bending a hook, the teaser extends the bait’s length to more than 10 inches and adds more swimming motion.

The next step is upgrading the front and middle treble hooks and split rings (2). Hooks like the 6X strong 4/0 VMC Fish Fighter Treble will stick hard in the bony mouth of a big bass and resist bending or breaking during the fight. To attach the treble, use a heavy-duty split ring like the Rosco 6XH or Spro Power Split Ring Size 7.

Every striper fisherman has a stash of minnow plugs, either the classic Bomber Long A or the newer Daiwa Salt Pro Minnow. Minnows can be tuned to produce both quantity and quality, but when it comes to the latter, a few upgrades are needed to keep bass from mangling the bait.

Almost all minnow plugs have a fixed hook hanger on the belly. The torque applied by a big striper can twist this hanger and crack the plug. If you’re lucky, this will only cause your plug to spring a leak; if you’re not, the fish will rip the hook hanger out of the body and leave you with a broken plug and a fish story. Adding a barrel swivel between the split ring and the hook will prevent the bass from twisting the hook hanger (3). Attach the swivel directly to the hook hanger by cutting one swivel eye and bending it out just enough to fit over the hanger, and then bend that swivel eye back into place. Similarly, cut the eye of the hook to work it over the swivel eye and then bend it back into form. You can also remove the rear hook (4) as many anglers believe two trebles actually create more room for error than a more positive hold.

Read Next: Why You Should Use Artificials for the Fall Striper Blitz

Some fishermen go much further by drilling out minnows, adding a stainless-steel through-wire and swivels (5), and then filling the hollow-bodied plug with foam (6). The resulting plug not only hooks and holds onto big stripers, but it also survives battles with true giants much more effectively than stock plugs.