How to Catch Spring Striped Bass on Live Bait 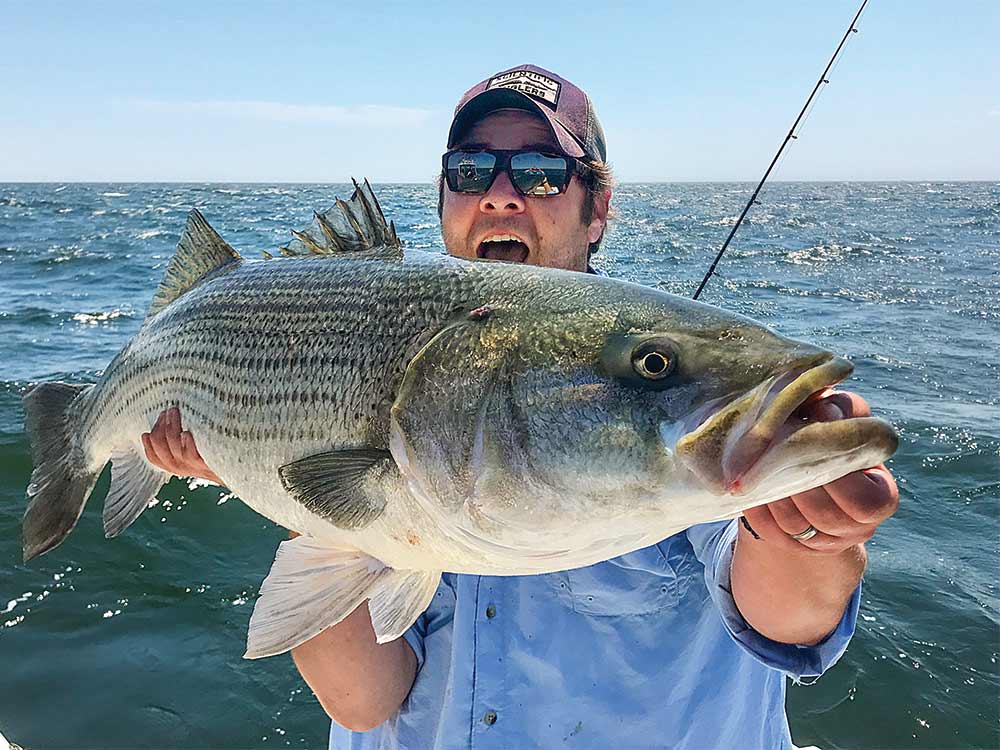 One of the most incredible sights you’ll ever see is a school of menhaden—known as bunker along the New Jersey coast, where I fish—getting hammered by heavy striped bass. These protein-rich baitfish aren’t little minnows. They’re 12- to 14-inch filter feeders that can weigh a pound or more. When a 20-yard circle of scared-to-death bunker take to the air in unison, you know the bass beneath them aren’t going to be little. The same applies to landlocked freshwater stripers across the country—if a huge gizzard shad is getting nervous, it’s probably not a little fish that’s about to take a shot. Some might assume that fishing these large live baits is mindless angling, but there are actually a few tricks for upping your success.

When my friends and I head out in spring to fish for stripers, we’re always searching for “unhappy bunker.” You can usually tell if a school of these fish is worth your time just by looking at them. And just because they’re not getting obviously hit by bass doesn’t mean you should instantly motor on. An all-out blitz is the best-case scenario. If the school is swimming slowly in one direction, they’re “happy” fish. Unless you’re marking bigger players beneath them with your sonar, move along. If you encounter a school swimming in a circle, this typically means the bait is nervous. The tighter the circle, the more intensely they’re on guard. Any school exhibiting signs of the jitters is worth targeting.

There is a lot of debate about where to hook large live baits. My preference is perpendicular to the body through the back just forward of the dorsal fin when you’re free-­lining these offerings. Stripers eat their prey head-first, and because the back meat is soft, I believe the hook will rip out more quickly, allowing it to penetrate faster. In stronger current, during a fast drift, or when trolling, I’ll hook the bait through the nostrils. Pulling the bait face-first allows it to swim with the current more naturally, whereas a back-hooked bait will often get spun sideways. No matter how you pin your livey, cut off the bottom part of the tail fin. Not only will this slow the bait down, making it an easier target, it will also cause your bait to emit a slightly different vibration than the other baitfish in the school.

My first foray in pure-strain sweetwater stripers was on the Clinch River in Tennessee with guide Bud White. As in many inland striper fisheries, slow-trolling with planer boards is the method of choice, since covering water is critical unless the fish are actively blowing up shad schools. White was a firm believer in a natural presentation, and to achieve it, he made sure his hooks were big enough to handle a heavy bass, but light enough to stop them from making his shad swim nose down. He also didn’t want his planer board to affect the bait’s ability to swim freely, so he leaned on boards he created himself. The key features were that they were ultra-light and floated. When a big fish hit, the board would snap free, allowing the angler to fight only the bass and not the board. White painted his boards DayGlo orange, and would simply swing back around after the fish was released and pick them up.