The young pointer was retrieving a downed quail when she fell into a deep hole. Then a local game warden arrived with some rope, a kennel, and a plan 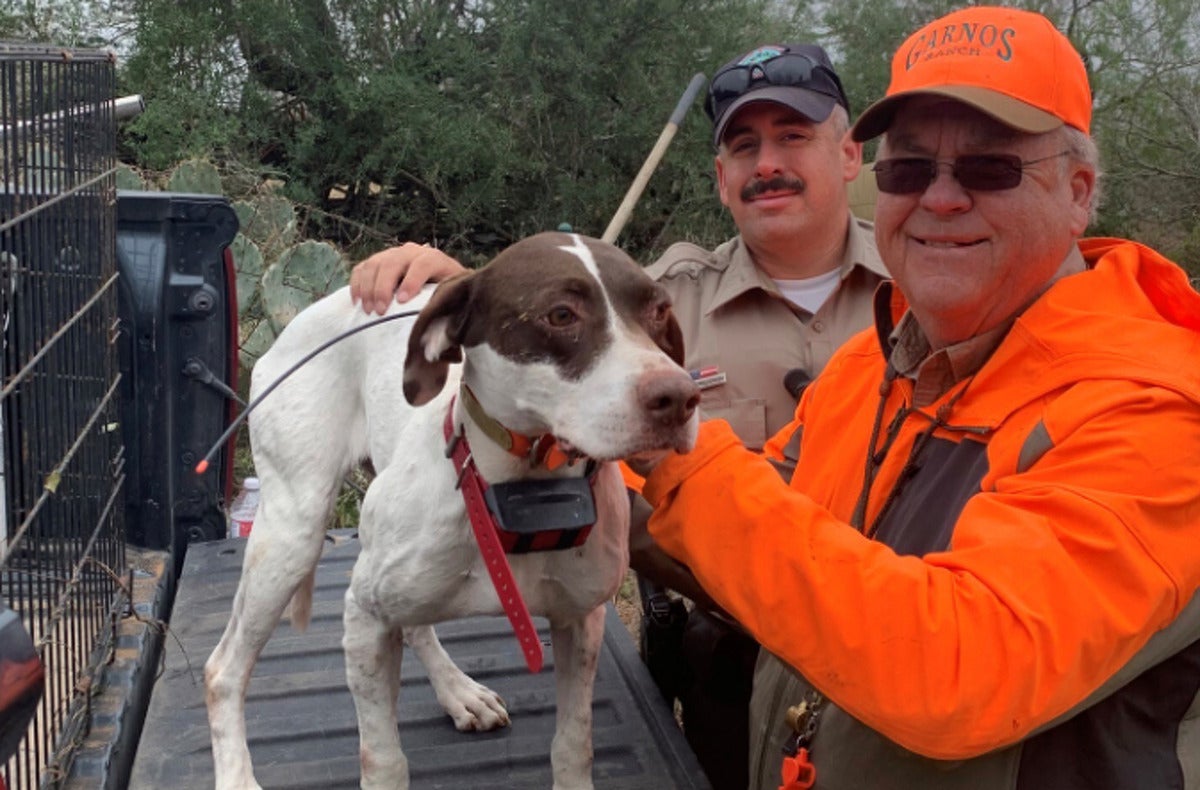 Standing next to game warden Carlos Maldonado after the rescue, Kent Key puts a loving hand on his bird dog. TPWD photo
SHARE

We’ve all heard the timeless trope before. Lassie runs up to the farmer and summons him by barking repeatedly. The farmer catches her drift right away and asks, “What’s that Lassie? Timmy fell down the well?!”

While this back-and-forth never actually occurred in any of the 591 episodes of “Lassie,” it has been ingrained in popular culture nevertheless—partly because, in real life, dogs have alerted rescuers by barking on several occasions. But that script was flipped down in Texas a couple months back, when two game wardens with the Texas Parks and Wildlife Department helped rescue a bird dog from the bottom of a 50-foot well.

TPWD’s Carlos H. Maldonado III is stationed in Hebbronville in South Texas, which is in the heart of the state’s quail country. The game warden tells Outdoor Life that he was first notified of the dog’s situation early on January 22. He received a call from a local landowner that morning, who told him that two hunters had lost their dog while quail hunting on his property.

“They were on the hunt, and they shot at the bird,” Maldonado says. “The bird went down, Maria went chasing after it, and then she was gone.”

A post shared by Texas Parks and Wildlife (@texasparkswildlife)

The landowner went on to explain that after some searching, the hunters had found Maria at the bottom of a 50-foot hole. Technically an old earthen silo that was used for storing grain and hay, the big hole in the ground looked more like an old well than anything else, and that’s how TPWD described it in a recent Instagram post.

Maldonado says he ran by his house to grab some rope and a kennel before heading to the scene by himself. On the way, he notified his partner, Lane Turner.

“I got to the scene before my partner Turner got there, and I was able to find the hole,” Maldonado says. “I saw the dog at the bottom and noticed that she was alert and looking straight up at us. She knew what was going on, so I knew the animal had a chance.”

He says that, to everyone’s surprise, Maria was walking around and did not appear to be injured. After some “quick thinking on the fly,” they cut a trail to Maldonado’s truck, cleared some brush from around the hole, and rigged a makeshift rescue basket using the wire kennel he brought along. Then they tossed in a few freshly harvested quail as bait and lowered the kennel all the way to the bottom of the 50-foot hole.

Maldonado’s partner, Lane Turner, had arrived by that point, and Maria’s owner, Kent Key, was there as well. Key was able to call to Maria and coax her into the kennel within a minute or two, and as soon as she jumped in, they pulled her straight up.

Their astonishment continued when they all realized that the young bird dog “was standing fine and looking good.” She had no broken bones or major cuts, but to be safe, Key headed home and took her by the vet for a quick check-up.

Read Next: Video: Alaska Snowmachiners Rescue Bull Moose That Fell Through the Ice

Judging from the photos, Maria looks like an English Pointer. Key did not immediately respond to requests for comment on the incident.

“She’s [definitely] a quail dog, and a mighty good one too,” Maldonado says. “How she survived that fall is a miracle in and of itself.”