Waterfolwers are already familiar with the Franchi Affinity 3, but this new turkey version offers a pistol grip, shorter barrel, and a hooded fiber-optic sight for better accuracy on longbeards 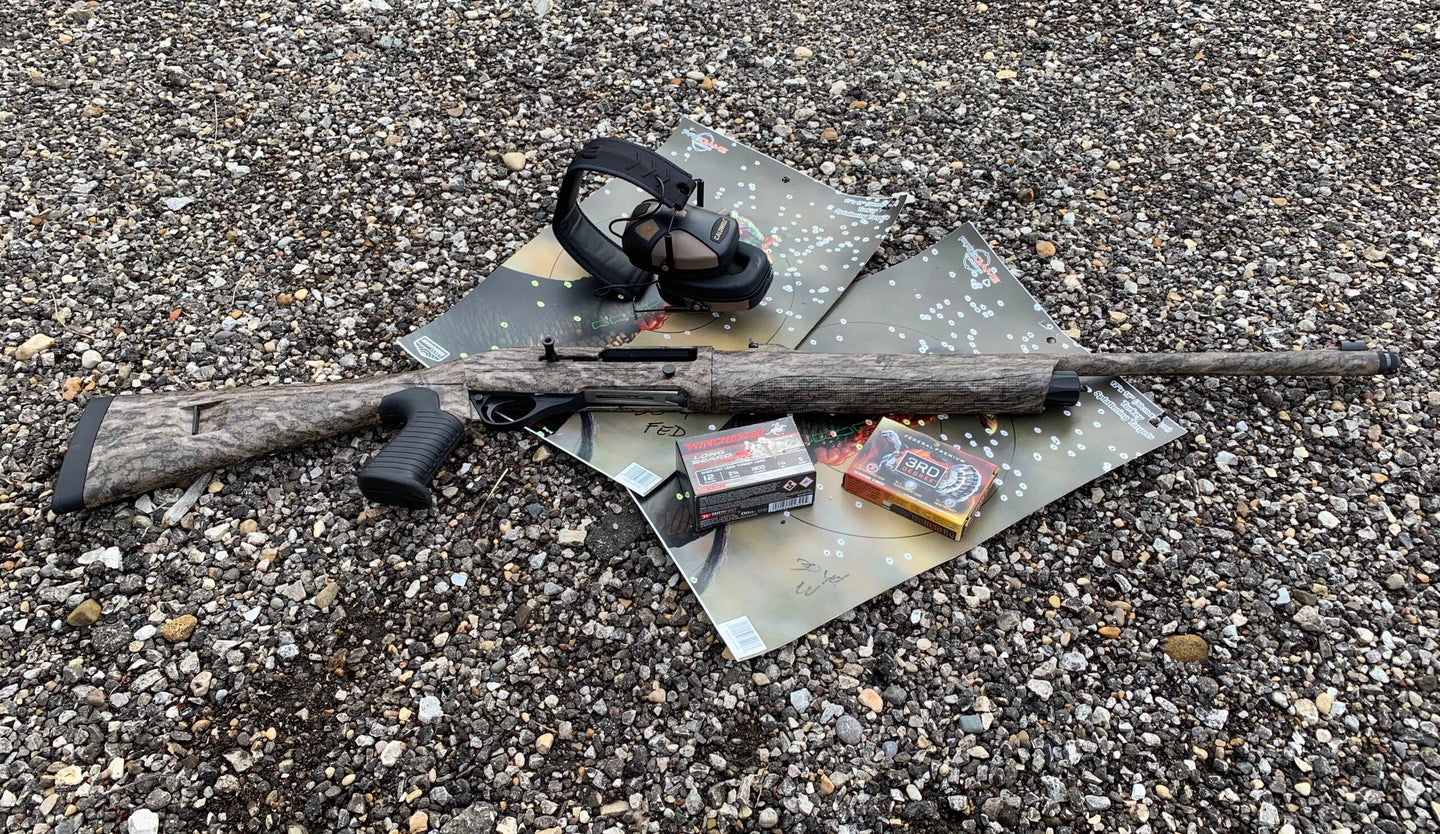 One of the most common occurrences shotgun writers see in the pumps, autoloaders, side-by-sides, and over/unders we test is that the game often completely changes once you pattern a gun at 40 yards and beyond. There have been many instances in which a gun I have shot at the range performed well at 30 or 35 yards, only to see a noticeable decline in performance at 40 yards. The reason for this is bird shot patterns become less effective the farther they travel from the muzzle of your shotgun (though the advent of bismuth and tungsten shot has helped extend the effective range of smoothbores). The same drop off occurred while testing Franchi’s new 12-gauge (it’s also available in 20) Affinity 3-inch turkey gun at the pattern board. It was shooting well at 30 yards, but once I shot it at 40, the wheels came off. I thought it was just another 30-yard shotgun. But here is what really happened.

I began the test by shooting a load of 2¾-inch Winchester Longbeard  No. 5s (1,300 fps, 1 ¼-ounce charge weight) at 30 yards and counted 69 pellets inside the 10-inch circle. That’s nothing to get excited about if you are a turkey hunter (there are 224 pellets in this load), but certainly enough to kill a gobbler at that distance.

I then shot a 3-inch load of Federal’s 3rd Degree, which is a blend of 5s (copper-plated lead), 6s (Flitestopper lead), and 7s (tungsten) with a 1¾-ounce charge weight. At 30 yards 154 of the 313 pellets found their way inside the 10-inch circle. Plenty of killing power.

Then I took the gun out to 40 yards. Fewer than 10 pellets struck inside the 10-inch circle with both loads. I shot each shotshell again to see if I had whiffed the shots, but got the same results. I stepped back to 50 yards, and shot both loads twice again. The results were even worse. With my shoulder now throbbing (shoot an inertia-driven gun with turkey loads at your own risk), I was about to scrap this gun test.

But I had some 30-inch targets in my shooting bag from testing waterfowl shotguns and decided to staple one up and shoot from 40 yards. My best guess at that point was the gun was shooting high, causing the pellets to fly over the top of my turkey targets. Sometimes shotguns fit oddly. The front bead, rib height, length of pull, cast, and drop can all contribute to a gun shooting high (or low, left, or right), which is why you should always shoot a gun on paper at various yardages to find its point of impact.

I aimed at the very bottom of the 30-inch circle and fired a 2¾-inch Winchester Longbeard. The pattern hit at the very top of the target, about two feet high from where I was aiming. I’d solved the mystery, and was able to salvage the test by holding low on the target (more on that later).

Most successful duck guns eventually get turned into turkey guns. It’s an easy way for gun manufactures to sell more models of essentially the same gun with a few modifications. Franchi added a pistol grip to the Affinity 3 (which was first launched as a 12-gauge for waterfowlers), cut the barrel length from 28 to 24 inches, and added a hooded front fiber-optic sight, so turkey hunters can be more accurate on longbeards at distance. Unfortunately, the sight had the opposite effect for me.

I have shot the waterfowl version of this gun well on clays and ducks, and I think the height of the fiber-optic on the turkey gun is what caused me to shoot over the target at longer yardages. I did go back and shoot the gun again after realizing the hood was just a piece of metal that slid off the end of the barrel, but it still shot high for me. The receiver is drilled and tapped for an optic though, and a red-dot would put you on target.

The Affinity is inertia-driven, like all current Franchi autoloaders are, and it is not forgiving on your shoulder when shooting turkey loads. The 1¼-ounce loads of Winchester Longbeard were tolerable, but shooting two boxes of 1¾-ounce 3rd Degree was not enjoyable, and I could feel the sting of that shell after a single trigger pull. The gun is lightweight (7.7 pounds in the 12-gauge and 6.8 pounds in the 20), so it’s great for running and gunning, provided you can shoot it straight. There is an Elite version of the Affinity Turkey that comes in Subalpine Optifade camo on the stock and fore-end with a Cerakote finish on the receiver and barrel. It also has two extended Rhino choke tubes in Turkey and Extra-Full Turkey.

I shot the basic model that is available in Mossy Oak Bottomland camo and also comes with standard Turkey and Extra-Full Turkey extended chokes (I tested the gun with the Extra-Full, but shot both and found them to pattern similarly). There is also an over-sized bolt handle on both models and I was delighted to see that Franchi finally upgraded the bolt release button from a piece of plastic (found on earlier iterations of the waterfowl gun) to steel coated in texturized rubber. The Affinity 3 has an MSRP of $1,250, which is pricey for a gun you can only use to kill turkeys, and maybe predators.

At The Range With the Franchi Affinity 3

Since the gun shot two-feet high for me at 40 and 50 yards I measured two feet below the center of the turkey target with a tape measure and marked it in on the patternboard with a black marker so I would have a hold point. It was similar to holdover in rifle shooting, except with the Franchi I had to hold under. That means my results were not as good because the gun did not fit me properly. Take that into account when you look at the pattern densities below. I still ended up with some decent results from 30, 40, and 50 yards shooting at a 10-inch target. Each pattern would have resulted in a dead gobbler. But at 40 and 50 yards, I would have had to aim at a longbeard’s feet to kill him.