The 10 Worst Fishing Lures of All Time

This is a list of baits you don’t want to stock your tackle box with. 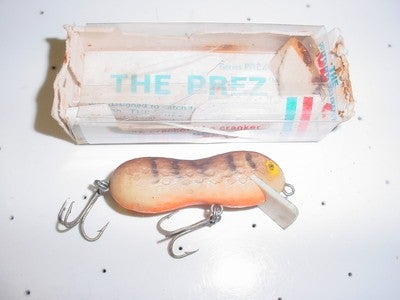 Lures come in a dizzying array of shapes, sizes and colors. Many are designed to entice fishermen, not the fish. While most of those listed here bombed at retail, a few sold briskly. Thus lending credence to the old adage: “there’s a sucker born every minute.”

The turbulent ’60s will be remembered forever for its tumultuous political and cultural movements and the Heddon Hi-Tail. In terms of fishing lure oddities, the Hi-Tail may well be the oddest. This combination wakebait, crankbait, and topwater basically looked like a little whale.

According to Heddon’s catalog, “neither you or the bass will be able to let it rest when you see its tail-flicking, gurgling, rollicking surface antics.” The Hi-Tail was cataloged for three years and was popular with fishermen during that time. However, we’re not so sure that it was as popular with the bass.

According to the manufacturer, once you tried the Hover Lure, “you’ll never fish below the water’s surface again.” This imitation dragonfly looked like a plastic bug on a stick that was stuck to a float with a hook wedged in its butt. In theory, bass would leap out of the water to gulp down the faux fly. In practice, apparently the hover thing never really took off.

This little self-propelled ditty utilized an on-board fuel to make it swim. To use, add the magic powder (included) and set the bait adrift. Water set off a chemical reaction and off the bait would go, hopefully sputtering into a fish’s open mouth.

Fisherman Joe’s Lure fizzled. Its self-propulsion was short-lived and a royal pain to keep reloading. Ironically, for the chemical reaction to work, the lake water had to be slightly acidic—just the type of water bass avoid like the plague.

The as-seen-on-TV trolling bobber promised to do the work for you and guaranteed more fish. To operate it, the angler simply tied his favorite bait to the bobber, switched on the inboard/outboard motor, and set the bobber afloat. It would then chug your offering out into the lake and into the lair of a predatory fish. The end result? Apparently, anglers prefer casting.

As you may remember, Chuck spent years helping couples make a Love Connection, so who better to help fishermen make a bass connection? Well, perhaps it wasn’t Woolery who admitted in his television commercial that he was initially more than skeptical of the Moto Lure. However, after “catching countless bass on it,” Woolery says he became a big fan (and paid spokesperson).

I had a neighbor buddy who bought a slew of these and actually talked me into throwing one. After getting carpal tunnel from prolonged casting sessions without a bite, we removed the hooks and they became bathtub toys for the kids.

No matter what you thought of President Jimmy Carter’s administration, we’re pretty sure we know how you felt about the Carter-inspired bass lure called The Prez. It was back in 1976 when lure designer Cotton Cordell introduced the peanut-shaped crankbait to the bass world, which reacted with a collective yawn with perhaps a few chuckles mixed in.

Lure collectors still debate whether the lure was actually designed to catch fish, or as an ill-conceived prank (we lean toward the later). The bill was painted with a big set of buckteeth, monument to President Carter’s famously toothy grin.

With a moniker that sounds more like dog food than a fishing lure, the Mighty Bite has inspired legions of fishermen into throwing down their $20 for the promise of fishing with the “only proven five-sense fishing lure system.”

The Mighty Bite kit features a colossal assortment of components, said to make your offering look, smell, sound, taste, and swim like a wounded baitfish. Though it’s alleged to ignite a fish’s DNA trigger response, our cynicism sonar is off the charts.

We’ve bestowed “The King of Novelty Lures” award to the Heddon Big Bud—a crankbait that is akin to throwing a soggy tennis shoe with an action that mimics that of an ice cream truck with a tire going flat. If commercial success is any measure of a lure’s worth, however, this contraption is a hit. We’re guessing that many thousands continue to hang from pickup truck rearview mirrors all over bass country.

Arguably the best-selling lure of all time (at least according to the manufacturer), this backstroking soft plastic was once the king of QVC and infomercials. The idea is simple, a lure designed to swim away from the fishermen. While plenty were sold we’re guessing that only a few have caught fish. You see, fishing with a lure that swims backwards requires a great deal of rod and reel finesse. That’s a skill set that novices—the target customer—sorely lack. 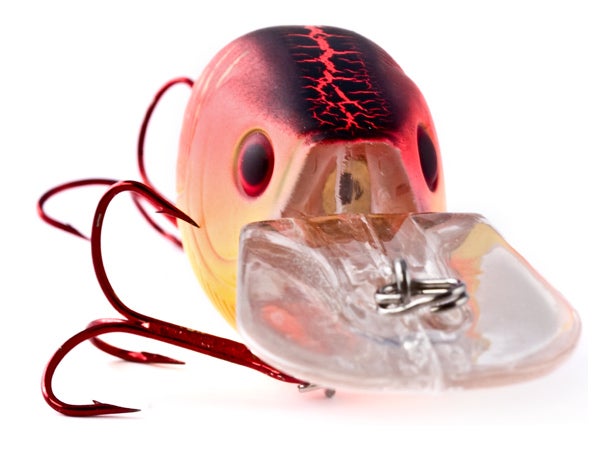 The marketing pitch was simple: A flashing, water-activated light implanted in the lure’s bill would trigger bass to strike. A great deal of marketing money was spent to attract testimonials from bass pros, but it apparently failed to trigger enough anglers to open their wallets. The LaserLure faded into oblivion in 2012. Yet another fad lure that didn’t last.