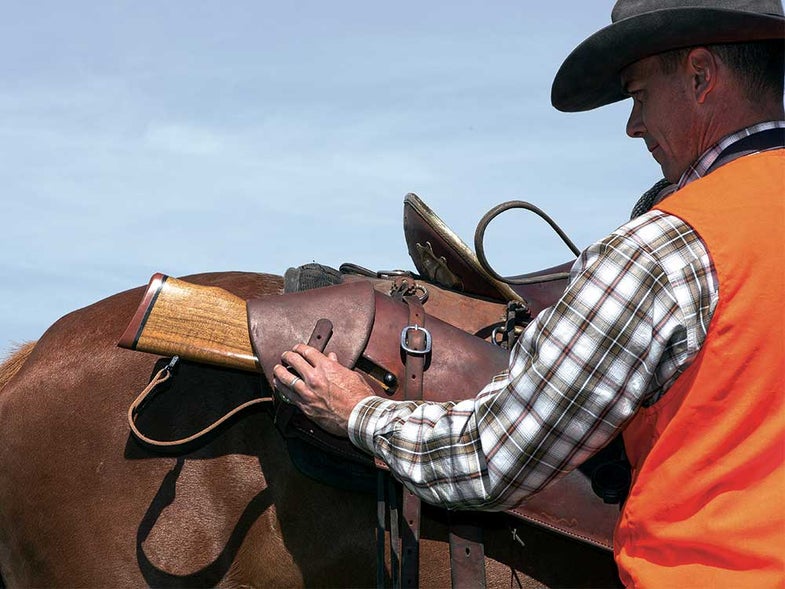 Rigged under the saddle with the butt facing to the rear, a rifle will slide through brush more easily. But it may be less comfortable for the rider. Chris Sorensen
SHARE

On a familiar trail through burned deadfall to my lookout, where I’d tie my horse and break out the binoculars, the elk were there, 40 yards in front of me, stretched with necks craned to get a better view. Antlers were irrelevant—this was my last weekend of an either-sex hunt, and the freezer was bare.

I piled off my excited gelding, fumbled for a tie-up tree that wouldn’t snap should he pull back, and yanked at a bolt-action rifle jammed into the saddle scabbard. I was quick, but not quick enough. The elk melted into the green timber below.

Western hunts have involved rifles on horseback since Lewis and Clark balanced unwieldy muzzleloaders across the pommels of their saddles. Later, cowboys slipped lever-actions designed for horseback use into slim scabbards that rode unobtrusively under the stirrup leathers or vertically in front of the saddle horn. Now we’ve returned to the unwieldy stage—horseback hunting seems far removed from the minds of those who design firearms and their accessories.

Oversize scopes with extra protruding knobs, bipods, and long barrels are not horse-friendly. Heft, too, is undesirable, in spite of the strength of your equine friend. On a rotund, low-withered horse, you’ll continually stand in the stirrup opposite the rifle scabbard to bring your saddle onto an even keel.

Padded, fully enclosed synthetic scabbards, such as the TrailMax, can accommodate bulky long-­barreled rifles. My son bungee-cords a quick-attach bipod to the outside of his scabbard and can bring it into action quickly. (A herd of elk on the far hillside is a powerful motivator.) Still, the added bulk of such a scabbard isn’t without cost—you’ll feel the lump under your stirrup leather, and an aching knee might spoil the campfire that evening.

Jack O’Connor wrote that horseback hunters would go to war for their opinions on scabbard placement. Some still would, but I like his preferences: butt forward, scope up, bolt handle away from the horse, the scabbard at a 45-­degree angle down at the muzzle so the rifle doesn’t ride directly under your knee. Scope mounts have strengthened since O’Connor’s day, but an expensive scope shouldn’t be a shock absorber under a rifle carried upside down.

Here are some rifle choices that have worked well for me.

For the lever-action purist, who would rather stalk within 60 yards of a timbered elk than brag about a shot at 600, it’s hard to beat the Marlin 336 in .30/30 or .35 Remington. Mine, purchased at age 14 with ranch-hand earnings, sports XS peep sights and a cut-down magazine, handy for vertical carry in a carbine-length scabbard. Hornady Flex-tip ammo extends range and will do the job on elk.

The modern lever-action began with the Savage 99, but I’ve been coveting a Henry Long Ranger in .308. Still slick in and out of the scabbard and easy to scope, it’s capable at moderately long range. More calibers are rumored; I’m pulling for the .260 Remington and .338 Federal.

Single-shots are also scabbard-friendly, and all true riflemen love the Ruger No. 1. My Light Sporter in .280 is a mere 38 inches long, yet it packs a long-range punch. A disadvantage is speed into action, since you must load after dismounting. (Never carry a rifle on a horse with a round in the chamber.)

Classic bolt-actions require a scabbard with a bolt slot but can be reasonably compact. It’s hard to beat my Browning A-bolt in .325 WSM, with its short action and 23-inch barrel. One of the lighter rifles I own, it tripled on pronghorn, deer, and elk the year I bought it.

For the long-range aficionado, light weight can mitigate long barrels and heavy scopes. Expensive options exist, but the Kimber Mountain Ascent in .300 Winchester or 7mm Remington Magnum might help you dodge a second mortgage. The same goes for scoping it with the Bushnell Elite Long Range Hunter with 30mm tube, 3–12x44mm. You’ll want a fully enclosed scabbard like the TrailMax.

Buy your own saddle scabbard before going on an expensive guided hunt—don’t rely on the outfitter to furnish something that works, especially if you’re left-handed. Get longer straps if necessary; those furnished are often too short. For leather scabbards, a removable hood to fully enclose the butt is nice when the weather turns sour. And, if possible, arrange for training rides with the rifle in place to harden muscles and discover which scabbard position really works for you.

Related: Backcountry Hunting: How to Tie A Horse’s Lead