These vintage rifles aren’t pricey, and they're plenty capable of killing foxtails and grays 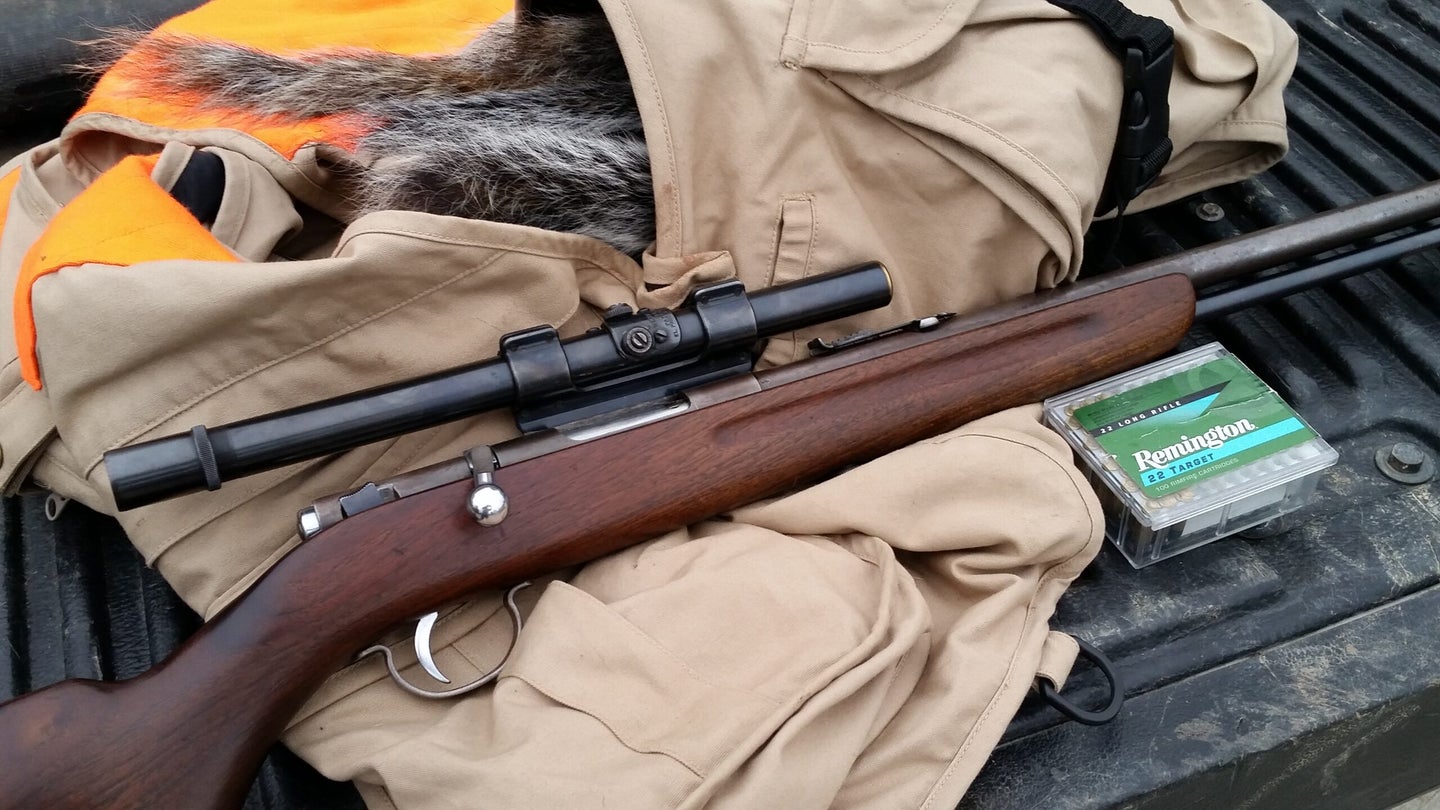 Many traditional hunters grew up with a .22 LR rimfire rifle in their hands. They were turned loose into the squirrel woods by their mothers and fathers to pursue foxtails and grays amongst stands of hickory, oak, and pecan. Many of the now vintage guns we carried as kids are still formidable tools for squirrel hunting. I continue to tote several of them into the forest each fall and spring (behind a good cur or feist). These old rimfires are available used and new, typically affordable, and precise enough to make a well-placed head shot on a squirrel at 50 yards, so you can save the quarters and saddle for the skillet.

Remington’s Model 34 tube-fed bolt gun was first introduced in 1932 but only produced until 1935 when it was replaced by the 341. My father purchased a 34 in the early 1950s. It was his squirrel rifle for over a half-century. An ancient Weaver ¾-inch scope still sits atop this rimfire. It has maintained its zero for 25 years without adjustment.

I am not sure what my father paid for this gun, but when Remington introduced it, the price was $13.50. This was one of Remington’s earliest bolt-action .22 rifles and it maintained a reputation as a dependable, accurate rimfire. Much of the rifle’s reliability stemmed from a unique action: the carrier lifted a new round from the magazine and placed it into the chamber. This bit of genius gun design was the work of Crawford C. Lewis, a longtime Remington engineer, whose number of patents compete with that of John Moses Browning.

The Model 34 was manufactured in three variants, the 34-A, with standard open sights, the 34-P, fitted with a Lyman peep sight, and an NRA target model, which featured the peep sight and a commemorative brass bolt handle. The Model 34 is 44½ inches long (24-inch barrel) and weighs in at 5 pounds, 8 ounces. The stock is walnut with finger grooves carved into the fore-end (some early models had no finger grooves) for a better grip. Today’s price: $200-$500

Bolt gun loyalists won’t love this lever-action pick, but I shot the Marlin 39A for years, and found it to be a supremely accurate rifle. Before Remington fell into bankruptcy and Ruger purchased Marlin, the 39A was one of the oldest and longest produced shoulder-mounted firearms in the world. ln the late 19th century it became the first lever gun chambered in .22LR, and the Golden 39A is one of the best-selling rimfires in U.S. history.

The 1891 was the rifle of sharpshooter Annie Oakley. The Model 1892 followed, then gave way to the 1897, before the 39 and 39A were introduced in 1921 and 1939 respectively. The Golden Mountie 39A came along in 1954 and was replaced by the Golden Model 39A in 1983 (this sometimes leads to the two models being confused). All the 39 rimfires are takedowns, and very accurate, which isn’t always the case with such a platform. To takedown the rifle, you simply insert a coin or flathead screwdriver into the screw that holds the rifle together and twist.

The 39A is a 6½-pound gun with an overall length of 40 inches (24-inch barrel). Ammunition can be loaded through the top of the magazine tube and is ejected through the side gate located on the receiver. You can mount an optic on this rifle as well. The 39A was discontinued in 2007. Today’s price: $800-$1,000

In the 1930s, Marlin, Iver Johnson, and Mossberg debuted several moderately priced .22 rifles. At the time, Winchester had the Model 56 and 57 .22s, but they couldn’t compete with price tags of their less expensive competitors. The guns also had a 22-inch barrel, which many shooters regarded as too short. The Model 69 was conceived as dual hunting and plinking gun. The 69A was introduced in 1939 with a few upgrades, namely an external cocking mechanism that operated simply by opening and closing the bolt. A lever safety switch was also added on the right side of the bolt, and grooves for mounting scope rings were machined into the  top of the receiver.

Like many older .22 rifles, the trigger pull on the 69A is not great. I never measured the trigger weight on the 69A I shot, but it was stiff. There is an internal adjustment screw which allows you to lighten the trigger slightly, but there will always be plenty of travel. The five-round magazine is not ideal. Sometimes you can come upon multiple grays and foxtails on a squirrel hunt, and you’ll run out of ammo fast with the 69A. There is an optional 10-round magazine, which I suggest buying multiples of if you can find them. The 69A was discontinued in 1963 with over 355,000 rifles sold. Today’s price: $500-$700

More than 11 million Model 60s were made after the semi-auto was introduced in 1960. It had a reputation for being an introductory .22. Most folks who shoot rimfires, likely start or have shot this rifle. Model 60s were inexpensive, amazingly accurate, and tough enough to endure the abuse inflicted by the young boys, farmers, trappers, and squirrel hunters that carried them.

Marlin adapted the Model 60 from its Model 99. A few things made the 60 a success right from the start. The walnut stock of the 99 was downgraded to birch, which made the 60 less expensive. Marlin went to a brass magazine tube as well, not the all-steel tubes on some of their other rifles. This kept rust away and added to the durability of the rifle. Marlin also added its own Micro-Groove rifling to the inside of the barrel to cause less damage to the bullet and a crowned muzzle, both of which made for increased accuracy.

The Model 60 was also known as the Glenfield Model 60 and thousands of variants were made and stamped for Montgomery Ward, Western Auto, and J.C. Penny. Some of those rifles had slight modifications made to them but were built on the original design of the Model 60. The Glenfield name was dropped in 1982, and any 60 made after that is considered a “new style.” The magazine length was shortened from 18 to 15 rounds in the late 1980s to comply with a New Jersey gun law, and in 2000 the barrel was shortened to match the magazine length. Ruger now owns Marlin, but the Model 60 is not in production, though it is expected to be reintroduced in the future. Today’s price: $300

Read Next: How to Get Started Hunting Squirrels With a Dog

A pump-action .22 rifle may not be for everyone, but I have always loved the Winchester 61. As a kid, a close friend of mine often hunted with one, and the trim little gun had a smooth-as-butter action and killed many a squirrel and rabbit.

Winchester introduced John Browning’s .22 pump-action rifle, the Model 1890 (in the same year). It was an immediate hit and soon became standard use (as were later models) in the popular shooting galleries at carnivals across the country. They became known as “gallery guns” and many small game hunters utilized them as well.

The 1890 was the first successful repeating rimfire rifle and was followed by the 1906. Both were exposed hammer, top eject rifles. By the 1930s Winchester had a long run of success with pump-action rimfires. America was now in the Great Depression and competition for market share was fierce. Remington had the Model 12, a .22 slide-action and Marlin had the Model 32. Both guns were hammerless (the hammer was hidden inside the receiver cover). Winchester had to keep up with the times, and in 1932 the 61 was born.

The new streamlined 61 fired .22 short, long, and long rifle cartridges. It could be ordered with a round or octagon barrel. The side-eject 61 kept the magazine under the barrel, and the sights were a brass bead front post dovetailed into the barrel with an open, stepped elevator rear sight.

Seventy-five 61s were engineered with trap shooter Fred Routledge’s smooth bore barrel, which could shoot .22 shot cartridges. The Routledge bore had 10 ½ inches of smooth surface beginning at the chamber with a diameter of .217 inches. The bore transitioned into 13½ inches of smooth with a diameter of .375 inches. This was done to stop the tiny shot pellets from colliding and spinning. It also increases the range and pattern of the shot.