Kimber designed this mountain rifle to be lightweight, durable, and affordable 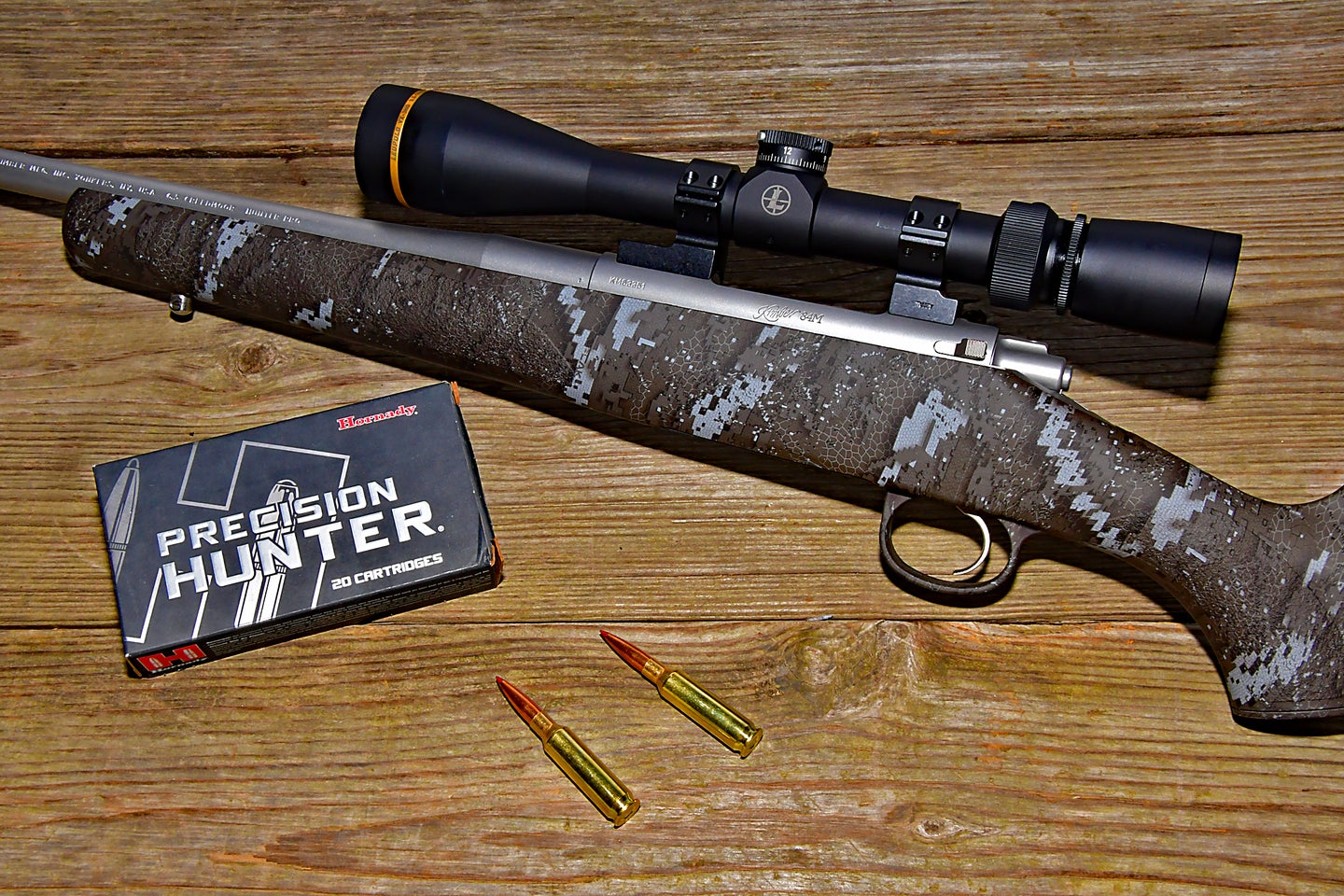 Some hunting rifles just have a way of turning your head at the gun store. It might be the slim, trim lines of a mountain rifle that catch your eye. It might be a distinctive camo pattern on the stock, or the sight of a controlled-round-feed action using a Model 70-style safety, that commands your attention. Or, it may be just be the price tag. The new Kimber Hunter Pro Desolve Blak rifle fill all of the above requirements. Kimber has long been known for producing lightweight hunting rifles, which are fairly pricey. Prices on current production rifles range from about $1,500 to more than $3,500. Like many manufacturers, Kimber recognized market demand for a more affordable rifle, and their answer came a few years ago in the form of the Hunter model. The new Hunter Pro Desolve Blak is its slickest design yet in the series.

Let’s take a closer look at the Desolve Blak. The model I tested was chambered in 6.5 Creedmoor.

This rifle takes its name from the distinctive yet understated Desolve Blak camo pattern on the rifle’s stock, which has clean, classic lines. Overall, I like the look, but I wasn’t too sure about the effectiveness of the light stippling on the pistol grip and forearm areas of the polymer stock. That concern was put to rest when I handled the gun with wet hands and found that the stippling provided a solid grip.

There are a few tradeoffs with this gun compared to its pricier stablemates, but the heart of the rifle is pure Kimber because it’s built around the same slimmed-down Model 84 action and reduced-circumference bolt that’s used in more expensive guns. Paired with its lightweight stock and a slender, sporter-profile barrel, the gun weighs just 5.9 pounds before you add a scope.

Of course, less weight translates into more recoil, and some people have a harder time shooting light rifles accurately because of it. Kimber addressed that by equipping the gun with a one-inch rubber recoil pad and topping the threaded end of the 22-inch barrel with a radial muzzle brake. The brake wasn’t really needed in the 6.5 Creedmoor-chambered rifle sent for testing, but it does make the gun a pleasure to shoot as far as recoil is concerned, and would be a welcome addition on the offerings chambered in .308 Win. and .280 Ackley Improved.

Between those three choices, you can hunt almost everything on the North American continent with a rifle that is practically impervious to the elements. The gun sports a satin-finish stainless steel barrel and action, and the bolt and trigger are also stainless. The action is a time-proven, controlled-round-feed design with a Mauser-style claw extractor and a wing three-position safety. With the safety in the rear, engaged position, the bolt is locked. The safety is still engaged in the middle position, but the bolt is not locked, so you can safely cycle rounds through the action to unload if needed.

In a nod to contemporary preferences, the rifle uses a detachable three-round magazine. It’s tougher than many because the frame and lips are made of aluminum, while the bottom and follower are made of polymer. Inserting the magazine is a little tricky and counter-intuitive, at first. You have to insert the rear of the magazine into the magazine well first, and then snap the front into place. The magazine will not insert if you simply try to slide it into place. With a little practice to commit this to muscle memory, it didn’t present an issue. A hinged, spring-loaded magazine release tab is protected within a recess at the bottom of the stock.

Wanting to keep weight to a minimum, I set up the rifle for testing with Leupold’s new VX-3HD 3.5-10×40 scope and a set of Talley lightweight rings. That brought the rifle’s weight to a mere 6.8 pounds, making it a true go-anywhere gun. Functionally, the rifle performed as it should. The bolt cycled smoothly, with no binding, and the rifle fed, fired, extracted, and ejected cartridges without hiccups. Bullet velocities were slightly less than factory-stated velocities for the ammunition tested, but that’s to be expected with a shorter 22-inch barrel.

Lightweight rifles don’t always produce tack-driving accuracy for a number of reasons, but Kimber says its guns should shoot one-MOA groups or smaller in the hands of “a highly skilled and qualified shooter using factory ammunition.” The rifle pretty much lived up to that assurance when I tested it with four different factory loads. Average 100-yard group size for all tested loads was .97-inch, with match loads from Hornady and Winchester turning in identical .74-inch best groups. The rifle did not disappoint with hunting ammo. Hornady’s Precision Hunter 143-grain ELD-X load produced 1.01-inch average groups and Federal’s 140-grain Fusion load clustered bullets into 1.03-inch average groups. Notably, that was the largest average group as the rifle proved to be consistently accurate with all four tested loads.

I suspect groups would have been a bit tighter if the rifle had a better trigger. Don’t get me wrong: It’s not a bad trigger—it’s just not a great one. According to Kimber, the trigger has a factory-set pull weight of 3.5 to 4 pounds, and is “factory adjustable,” which is another way of saying they really don’t want you messing with it yourself. I have, however, messed with Hunter triggers before and have been able to reduce the weight to slightly more than 3 pounds, taking care to perform safety checks. But I decided to leave this one at its factory setting to duplicate a buyer’s out-of-box experience. It broke at an average pull weight of 3 pounds, 15 ounces. That’s a little heavier than I prefer, but still acceptable for most applications. My primary issue with the trigger was the fact that it had a bit of creep that was most noticeable with a slow trigger squeeze. With a little practice, I found I could use it almost like a two-stage trigger.

I’m happy any time I can get a rifle this light to shoot 1-inch groups. The Kimber’s performance was on par with many lightweight rifles costing far more, but the Hunter Pro Desolve Blak rifle has an MSRP of $1,006. Pair that with the Leupold VX-3D 3.5-10×40 and you’re all-in for around $1,500. Not bad for an accurate, lightweight mountain rifle.