There’s more than one way to skin a blue cat. These two experts might not agree on much, but you can’t argue about their proficiency at putting big fish in the boat. 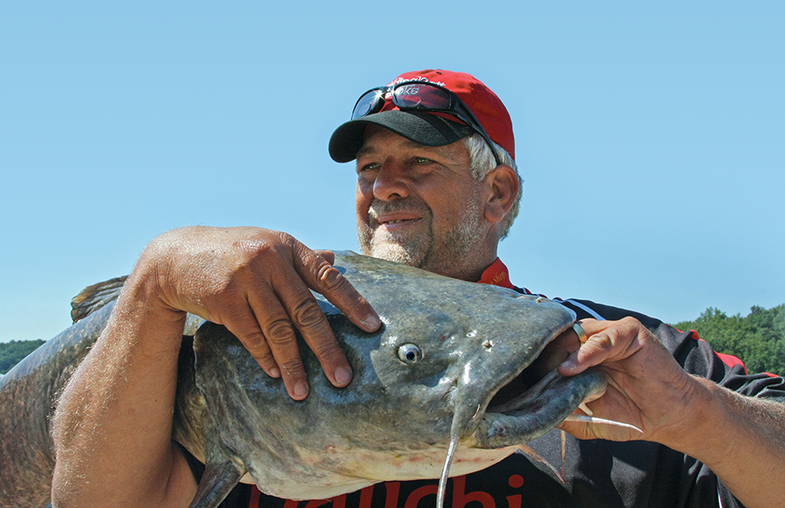 Catfishing has come a long way, baby. Once upon a time—like five years ago—the most common approach to catching all species whiskered was to sit on a bucket and throw something stinky in the water. Now, tournament catfishermen (yes, there are high-dollar derbies for catfish) are employing remote-controlled trolling motors, drift socks, side-imaging sonar, and complicated rigs to target blue cats.

We talked to two veteran catfish gurus who use a combination of old-school and high-tech methods. However, we forced each to pick a side and detail his most productive tactic.

Jeff Dodd, 51, from Trenton, Tennessee, is a farmer by trade, but he has been fishing for catfish since he can remember. Dodd used to sit on a creek bank soaking stink bait, but he is now addicted to high-tech approaches. He has won seven catfish tournaments since 2006.

Chad Ferguson, 41, of Fort Worth, Texas, is a lifelong catfisherman who has owned Catfish Edge Guide Service since 1998. He loves new, cutting-edge tactics but stands by traditional practices.

Outdoor Life: What is the best way to locate blue cats on a massive fishery?
Chad Ferguson: If you are talking about fall through winter, it’s pretty simple where I live. All you have to do is drive around a lake and see where the cormorants are roosting. Wherever there are roosting cormorants, there will be a wad of catfish.
Jeff Dodd: The first thing I do is turn on my Lowrance HD10 Gen2 sonar and scroll to the mapping page. I’ll look for hard edges, like ledges and other structure in deep water. If that is in an area where current is present, I’ll drive over it with my sonar and downscan. If I mark a single fish, I’ll go back and try to catch it.

OL: Why, exactly, are the fish there?
CF: Where cormorants roost, half-digested shad plop into the water all night, creating a turd buffet for catfish. It’s kind of nasty but, man, it attracts fish.
JD: Big blues, which are what I prefer to target, use deep edges like a guardrail on a highway. They kind of run into the wall and let it guide them up and down the river or lake. If there is a submerged tree or deep hole where they can stop and rest, even better.

OL: Once you locate fish, what is the strategy to catch them?
CF: Position your boat as far away from the roost as you can while still being able to make a cast to the base of the trees. Make a high, overhand cast so the bait splats on the surface. The fish respond as much to the noise as they do to the bait.
JD: Once I mark a fish, I set a drift using my MinnKota iPilot trolling motor. This remote-controlled electric allows me to set a very specific drift speed, which I can measure on the Lowrance unit. You want to drift half as fast as the current is running and follow the edge as it meanders around.

OL: What is your tackle and bait choice?
CF: I prefer baitcasting gear with 50-pound braid and a 40-pound fluorocarbon leader. Load a treble with punch bait on a bobber and lob it toward the birds.
JD: I prefer to walk a three-way rig when drift-fishing using heavy-duty baitcasting gear. This is simply a 2- to 8-ounce sinker (the weight depends on current and depth) 18 inches below a 13/0 Daiichi improved circle hook, which is on an 18- to 30-inch fluorocarbon leader. Fresh cut skipjack is the bait I prefer.