Michigan fisherman Jeff Pierce wasn’t going to kill the massive catfish he caught, just to have it officially weighed and measured, if he wasn't going to eat it 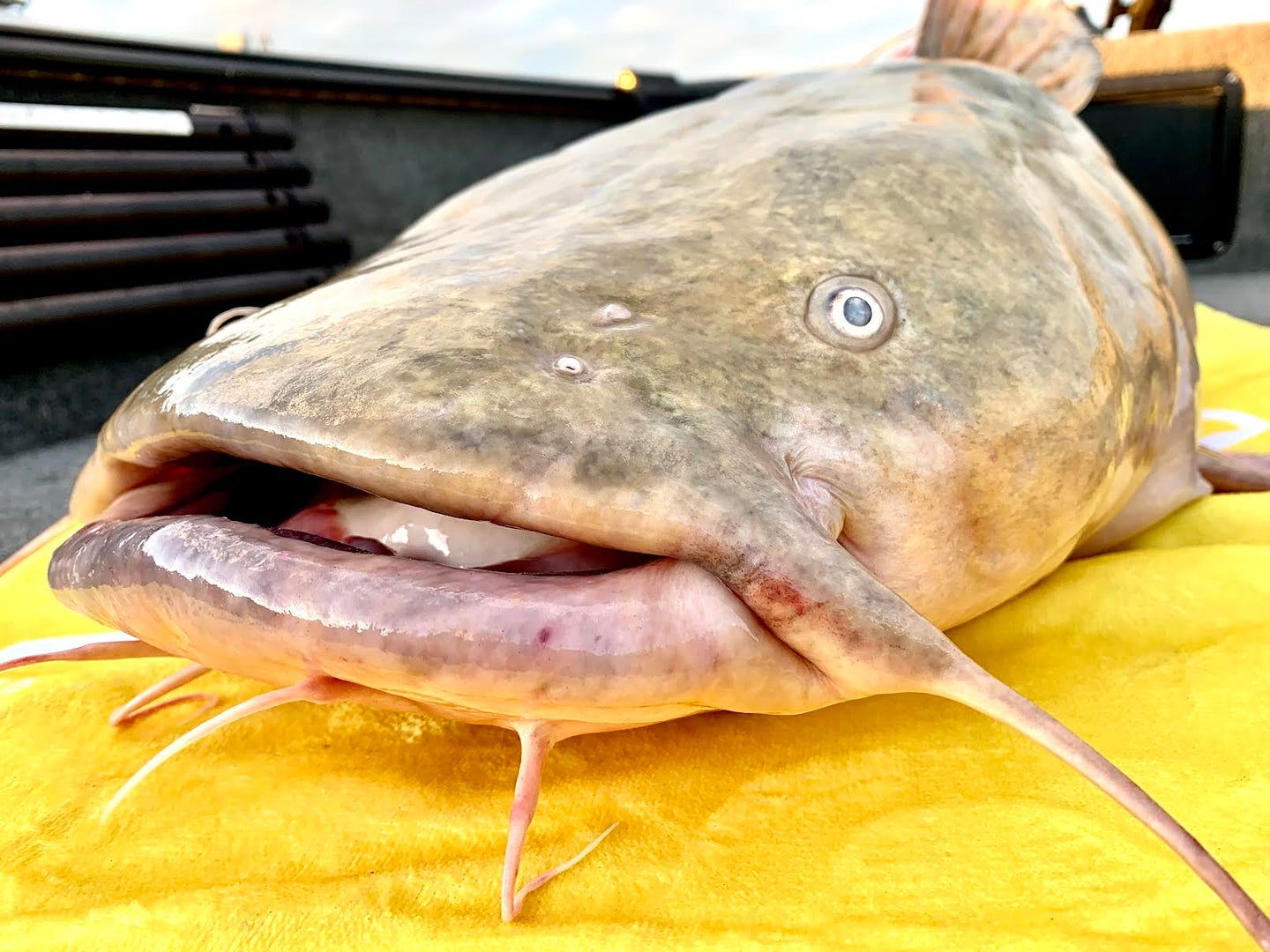 “I lift 50-pound feed sacks all the time, and that flathead catfish was much heavier, I’d estimate it at 60 pounds,” says the 50-year old angler from Hope, Michigan. “I’ve now caught three flathead cats from that same stretch of river that were longer than the current state record. One flathead I caught last fall was 50 inches. Another last August was just over 48 inches. Both were released, and were likely state records, too.”

He fishes the lower few miles of the Saginaw River near where it flows into Saginaw Bay off Lake Huron. It’s an area where he’s caught 20 to 25 big flatheads this year, with many fish in the 30- to 40-inch range.

Pierce didn’t keep the likely state record flathead for a couple reasons. Chiefly because a catfish that large is old, and such a bottom feeder—while surely good table fare—probably isn’t that healthy to eat. Pierce says he eats walleye from the same stretch of river.

“Who know’s what’s on the bottom of the Saginaw River,” he says. “That old fish may have been around and eating heavy metals, PCBs, who knows what for many years,” he says. “I wasn’t going to eat it, and I sure wasn’t going to kill the fish and have it officially weighed by the state DNR only to throw it away. And I sure wouldn’t give to someone else to eat.”

For years Pierce worked for Mustad tackle company, and now works for Scientific Anglers, the noted Michigan fly tackle manufacturer in Midland. He spends a lot of time fishing the nearby Saginaw, where he targets mostly walleyes, but catches crappies, freshwater drum, channel and flathead catfish, too.

“I mostly vertical jig with blade baits, and that’s what I used to catch the big flatheads,” he says. “The Sebile ‘Vibrato’ is the one I caught the 52-incher on. But Heddon ‘Sonars’ and ‘Silver Buddy” blade baits work, too. Flathead catfish love blade baits because they vibrate a lot and have some flash. They hunt ‘em down and just smash ‘em.”

Pierce was fishing a river channel ledge for walleyes, vertical jigging the blade bait in 28-feet of water near the bottom with a lift-and-drop motion. He was using 8-pound test Seaguar braid main line with an 8-pound Absolute fluorocarbon leader. He was closely watching his sonar, marking baitfish and big catfish when the flathead struck.

It was epic light-tackle fight, lasting over 30 minutes, he says. Landing the fish was an event, too, since he was fishing solo and the big cat wouldn’t fit in his net.

“It took me three times working it close trying to grab it before I got ahold of her with one hand, put my rod down, and grabbed her with both hands, hauling aboard my Lund boat and resting her on a towel to unhook her, shoot a few photos, and release her unharmed.

Good-size walleyes and big catfish hang in the same Saginaw River areas where it’s deep with structure drop-offs and plenty of baitfish, according to Pierce. Michigan law doesn’t allow anglers to keep fish in a boat live well and then locate a certified scale with a DNR witness to officially weigh a fish for a state record, and then release it, says Pierce. So he released the 52-inch likely flatfish record rather than kill and waste a fish he respects and enjoys catching.

“I have no question that 52-inch catfish was a Michigan state record,” he adds. “And it’s still living and growing back in the Saginaw River.”