How to Catch Catfish in Winter

Grab your hat and gloves, because winter is the best time to catch a trophy-class blue catfish 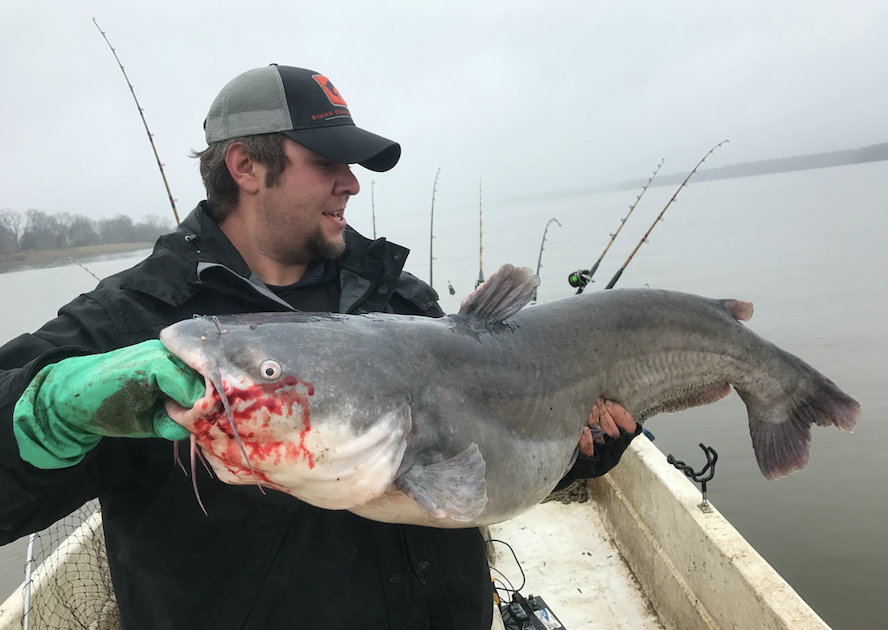 Do you consider the winter months the doldrums? If you’re an angler, the answer often depends on where you live. You might be part of thriving ice fishing scene. But from roughly the middle of the country south, it’s hard to deny that fishing slows down in winter. It’s not that there aren’t still opportunities, but bite windows get shorter, fish metabolisms slow, and winter weather can make conditions tough or even impossible to fish. Minus a few exceptions, there aren’t many fish that are as prime for the picking in winter as they are the rest of the year, but one of those exceptions is blue catfish.

Catfishing in general is closely associated with spring days and warm summer nights, at least that’s how many casual cat anglers think about it. Catfishing diehards, conversely, understand that shoulder seasons for many other gamefish are prime for not only numbers of catfish, but trophy fish. I learned this years ago from Virginia catfish sharpie Chris Eberwein. We were fishing on the James River in June when I asked about his favorite time of year to target goliath blues. His answer was January, and it caught me off guard. Since then, I try to make an annual winter run for blues and have spent time in both moving and still water during the cold months. If you’re looking for hot winter fishing and don’t want to play on the ice, here’s how to catch catfish in winter.

Where to Target Catfish in Winter

According to Eberwein, the reason catfishing in winter can be so good is predictability. When the water is warmer, the fish rove around looking for food. Come winter, these fish tend to group up and stay put. They do, however, still have to feed.

Life-long catfish hunters like Eberwein have hundreds of marks in their GPS. These vary from deep depressions surrounded by shallower flats to channels running through flats, to sunken river barges and piles of concrete. Anything that breaks the current and creates a soft spot for catfish to lay in or behind without expending too much energy has potential. The caveat is that you might have to check five or six spots before you land on the one with the motherlode. After years of winter fishing, Eberwein has a near-endless milk run of spots to check, but if you only know a couple, you could be in for a slower day. Even if you find one good hole that’s holding fish, it’s not uncommon for only a few in the group to be willing to feed. The good news is, you’ll usually know if any are hungry right away.

Eberwein had a ten-minute policy—if a rod didn’t bend under the strain of a big cat in that amount of time, he’d move.  The idea is that with natural food sources like shad and herring not as readily available, a jumbo cat that might be more cautious during warmer times will be 100% opportunistic in winter and pounce on any food that gets in its face. Eberwein prefers fresh shad year-round, though it can be hard to find in winter. One benefit of those heighted opportunistic tendencies, though, is that winter cats will respond to frozen baits more quickly than they would at other times of year. My biggest winter cat—a 52-pounder—was caught on the James with Eberwein. My biggest from shore weighed 34 pounds, and that I caught it February in the Potomac River on mackerel I purchased at the seafood market.

READ NEXT: How to Ice Fish for Catfish

Take current out the equation, and figuring out how to catch catfish in winter can be a little tougher to pin down. While there may not be a specific hole where they all group together, they will often gravitate to a certain depth range. Based on water temperatures, they may be favoring water in the 40-foot range or be as shallow as 10 feet. They can also be spread out over a wide area, which makes drift fishing the smartest option.

The first time I ever tried drifting for cats was on Lake Gaston in North Carolina with local ace Tony Fox. Unlike river fishing where you anchor the boat and secure baits to the bottom with heavy lead, Fox’s rigs employed lighter pencil sinkers tied to a three-way swivel with a 6-inch piece of monofilament. From the other side of the swivel, he ran a heavier 18-inch piece of leader to the hook, and he positioned a float just ahead of the hook. After baiting up with fresh shad, he’d cast out four rods at varying distances and let the boat drift, using the wind and gentle nudges from his trolling motor to keep the baits bouncing through areas where he marked fish on his sounder.

The fun part about the drift method is that you don’t need to use broomstick rods capable of casting 8 or more ounces of lead. It’s a lighter, more nimble approach to catching blue cats, and when a 40-plus-pounder hits, you’re in for a hell of fight on softer, more responsive rods. And nothing gets blood pumping back to frozen fingers and toes like battling a monster blue catfish and chasing it around the boat.