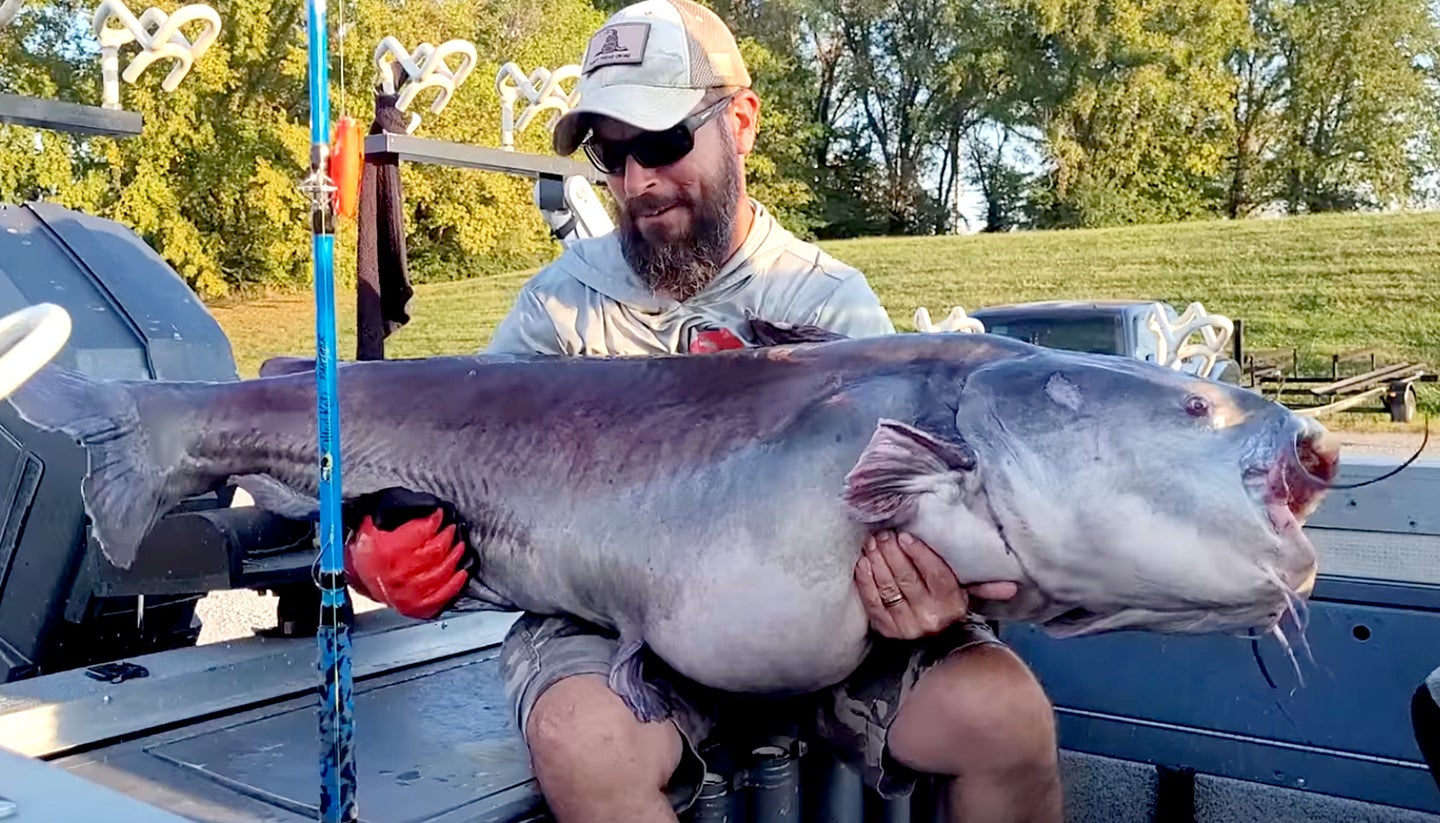 Angler Micka Burkhart holds up the pending Tennessee state-record blue cat, which was released alive after it was weighed on a certified scale. Bryan Ladd / Facebook
SHARE

Tennessee angler Micka Burkhart caught and released a brute of a blue cat last weekend that should easily replace the current state record for the species. Although Burkhart is still waiting on record verification and certification by the Tennessee Wildlife Resources Agency, the 118-pound, 7-ounce catfish he caught on Sept. 24 outweighs the current record by more than 6 pounds.

Burkhart caught the catfish around noon on Saturday while fishing with his wife on the Cumberland River in Stewart County, according to News Channel 9. He was using a Mad Katz rod rigged with 30-pound-test and a Gamakatsu 8/0 hook baited with a three-inch skipjack. After battling the catfish for a solid 45 minutes, Burkhart hauled the fish into the boat with some help from his wife. Then he borrowed a 110-pound scale from another angler on the river and promptly maxed it out. Well aware that the current state-record blue cat weighed 112 pounds, Burkhart realized his fish could very well surpass that number.

At that point, Burkhart wanted to get the huge blue on a certified scale. More importantly, though, he wanted to keep the fish alive and healthy so he could release it back into the river. After contacting the TWRA, he and his wife put the fish in their boat’s live well and waited at the nearest boat ramp.

“I wanted to do everything in my power to keep that fish alive and release it,” he told Channel 9. “I’ve caught a lot of catfish. I’ll keep those smaller fish to eat but I like to let the big ones go to catch them again another day.”

He said that after waiting for hours for a TWRA wildlife officer to arrive, he almost lost his patience and kicked the fish free. But then he received a phone call from TWRA’s Officer Dalton Gooch, who had already located a certified scale at a nearby game processor. Gooch helped the Burkharts carefully transport the 54-inch-long fish to Who Dat Processing, where the digital scale registered 118 pounds, 7 ounces.

Then they went straight back to the boat ramp on the Cumberland to release the big blue. A video posted on Facebook shows Burkhart and another angler standing shoulder-deep in the river as they revive the giant catfish and set it free.

“The video was only about two minutes long, but we actually stayed in the water with that fish for nearly 30 minutes,” Burkhart told reporters. “We did all we could, and the fish stayed strong. It never lost any of its color and he swam off healthy.”

Like many of the onlookers who watched Burkhart release the catfish that day, a lot of people have praised the angler from Big Rock, Tennessee, for going the extra mile to release the fish alive. More than a thousand people had commented on the TWRA’s Facebook post as of Monday morning, and many of them thanked Burkhart for prioritizing conservation above record recognition.

Read Next: The Biggest North American Catfish of All Time

“Good job Micka for landing that brute of a fish, taking care of it, and releasing it healthy to fight again,” Tony Fuller wrote on Facebook yesterday. “Couldn’t have happened to a better person! This is how it’s done folks. Conservation at its best!”

Fuller also pointed out that the current state-record blue cat, caught in 1998, was pulled from the Cumberland River as well.

“I’ve said it many times throughout the years [that] the next Tennessee state record blue would come out of the Cumberland River,” Fuller added. “Congratulations to Micka Burkhart for proving it!”