The Crustacean Collector Tony Cuccia / Chalmette, Louisiana When “the storm” hit—that’s how residents of southern Louisiana still refer to... 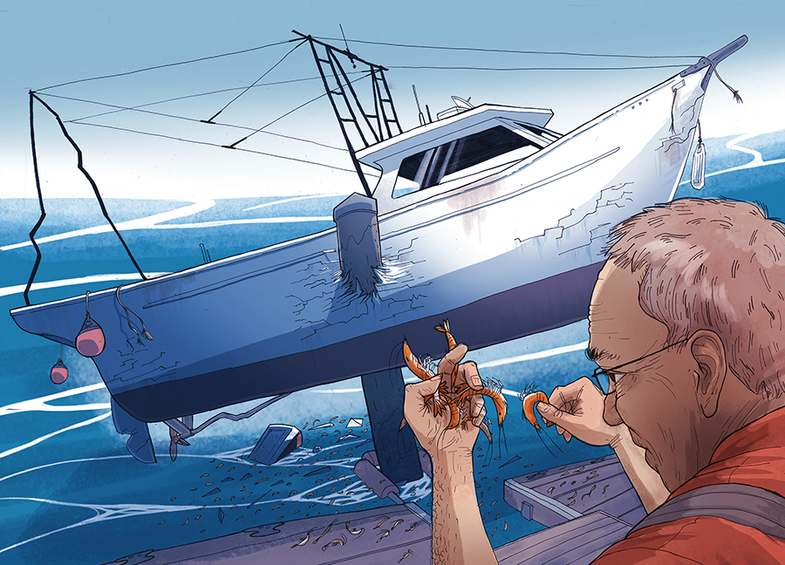 When “the storm” hit—that’s how residents of southern Louisiana still refer to Hurricane Katrina—one of Tony Cuccia’s shrimp boats, a 30-footer, simply evaporated. His second, a 35-footer, was lifted from its dock and impaled on a nearby piling. His entire shrimping business, which he and his sons had cultivated since 1980 in Chalmette, Louisiana, was skewered dead center by a telephone pole–size piece of wood.

“I moved here in 1961,” the 71-year-old says, “and found that there was a need to provide live bait for fishermen. There was just one guy selling live shrimp, and he wasn’t open often.”
So, Cuccia bought a 14-foot Boston Whaler and a small trawler. Along with sons Anthony and Kevin, he commenced shrimping the waters between his home just southeast of New Orleans and Breton Sound, a barrier island 25 miles into the Gulf of Mexico.

“It was a huge learning curve. We’d run the shipping channels and get hung up on wrecks, or lose trawls to reefs. But, we stuck with it and made a name for ourselves.”

While the majority of shrimpers focus on catching food shrimp—which are caught and stored on ice, where they die—catching these crustaceans and then keeping them alive is a whole different ball game.

“On a typical day, we will leave about 4:30 a.m. We head to our first spot and drop the trawls. Unlike the food-shrimp guys, we can only leave our nets in the water for about five to seven minutes, otherwise the shrimp will drown. So, we pick ’em up 20 to 25 times a day. It’s a tremendous amount of work,” Cuccia says.

Once a net is pulled up, the shrimp are placed in a picking well that is 18 inches wide and spans the length of the boat. Here, they sort the shrimp by hand based on size, and cull any bycatch.

“Once you get the shrimp on the boat, you have to be on your A game. We pride ourselves on delivering healthy live shrimp, and to do that you absolutely cannot stress ’em out. So we get rid of all the trash, which allows for fewer casualties, and get those shrimp in our aeration tanks with a minimum of handling.” On a good day, Cuccia can be off the water by noon with 2,000 to 3,000 live shrimp in his coffers.

Of course, the superstorm of 2005 put a damper on this pursuit for the majority of coastal Louisiana’s shrimping industry. On top of his boat crisis, Cuccia also lost his shop—the Fisherman’s Friend Bait Shop—and had to completely rebuild.

“We were able to get the 35-footer patched. Put a new outboard on her and repaired or replaced everything needed to get back on the water. We run only the one boat now, but we catch enough live shrimp to keep our shop stocked year-round. Plus, we supply one other area bait shop with live shrimp.”

To do so, the Cuccias are on the water six days a week, weather permitting.

“Live shrimp only last about three to five days in containment. You don’t want them to get old. So, we fish a lot. And sometimes you work like crazy to have a shop full of shrimp only to have the weather turn bad and the fishermen don’t come. For this work, you have to love it—it has to be in your blood.”

Catch ‘Em Up
“You can catch shrimp with a cast net. Focus on a flat where the water shallows up next to a cut, then use little dog food pellets to bait an area.”

Rig ‘Em Up
“Hooking a live shrimp under its horn keeps it alive longer. Also, gluing a piece of mesh inside your bait bucket so the shrimp have something to hold on to will keep them frisky.”