The Crayfish King Kelly Hutson / Durham, California Kelly Hutson was intent on becoming a computer programmer when he enrolled... 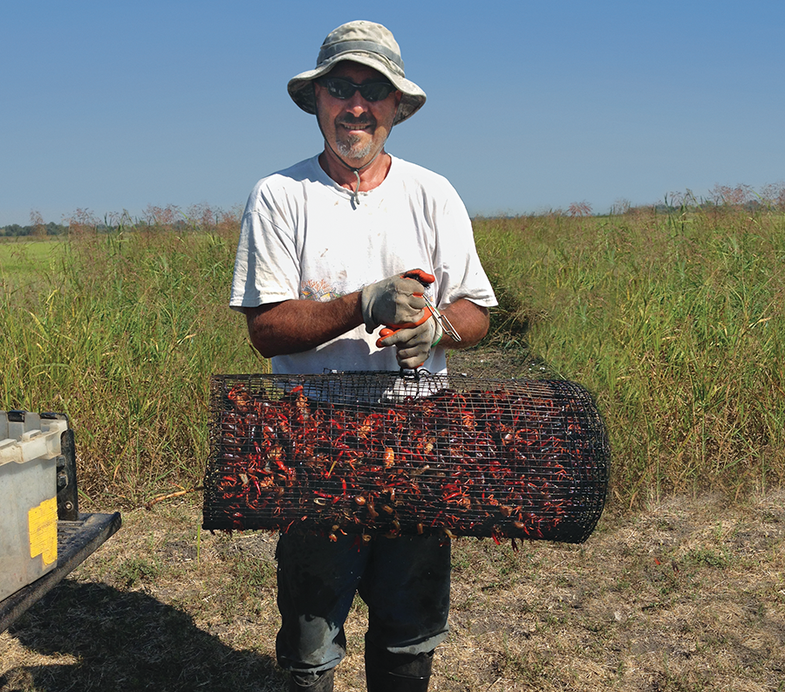 Hutson with a motherlode of crayfish trapped in the California delta. Photos Courtesy of Kelly Hutson.
SHARE

Kelly Hutson was intent on becoming a computer programmer when he enrolled at California State University in Chico. However, when a friend showed him how to catch crayfish out of a rice field, Hutson hit the delete button on the computer science degree.

“It was 1986 when I first went out with my buddy. I realized, man, you can make a lot of money doing this. Plus, you don’t have to sit staring at a computer screen all day. And you can avoid big cities altogether. So I was all in,” he says.

In 1987, Hutson bought a small johnboat, and along with fishing the rice fields for wild crayfish, he started plying nearby rivers. Eventually, his rounds would take him all the way to the Sacramento River and the California Delta, and over to the Feather River that feeds Lake Oroville.

The demand for crayfish seemed endless. In 2002, he upgraded to a custom aluminum boat that included an electric winch to help raise his crayfish traps.

His traps are connected by a heavy line, usually 1,200 feet long, with a trap clipped to it every 40 feet. To run a line, Hutson has to pull his rig from trap to trap, retrieve each one off the bottom, empty the crayfish into a storage tote, rebait the trap, and stack it in the boat before moving on. Once the entire line is pulled, he moves to a new section and drops the line again.
“I generally cover 5 to 20 miles of river per day, depending on how many I’m catching. Overall, I hope to catch about a pound of crayfish per trap. I’ll fish right up until dark.”

Hutson delivers his catch to two different wholesalers in Sacramento, who sell his crayfish to the food industry. He also sells to Bob’s Bait Shop in Isleton, California, which supplies all of northern California with the live crustaceans.

“I typically fish four days a week and spend the rest of the time on the road—I put 50,000 miles on my truck last year alone. Between the food market and bass fishermen, I sell all I can catch.”

Catch ‘Em Up
“Put your trap along the deep edge of a river, where the bank hits the river bottom. This is like a highway for the crayfish. They congregate on this seam to wait for dead fish to wash down the river.”

Rig ‘Em Up
“The best size for bass fishing is a 2-incher. There are three major segments to the tail, so hook the bait through the middle segment from the bottom up. I like to put a little split shot above the craw to help it find the bottom. This will keep your bait alive longer.”