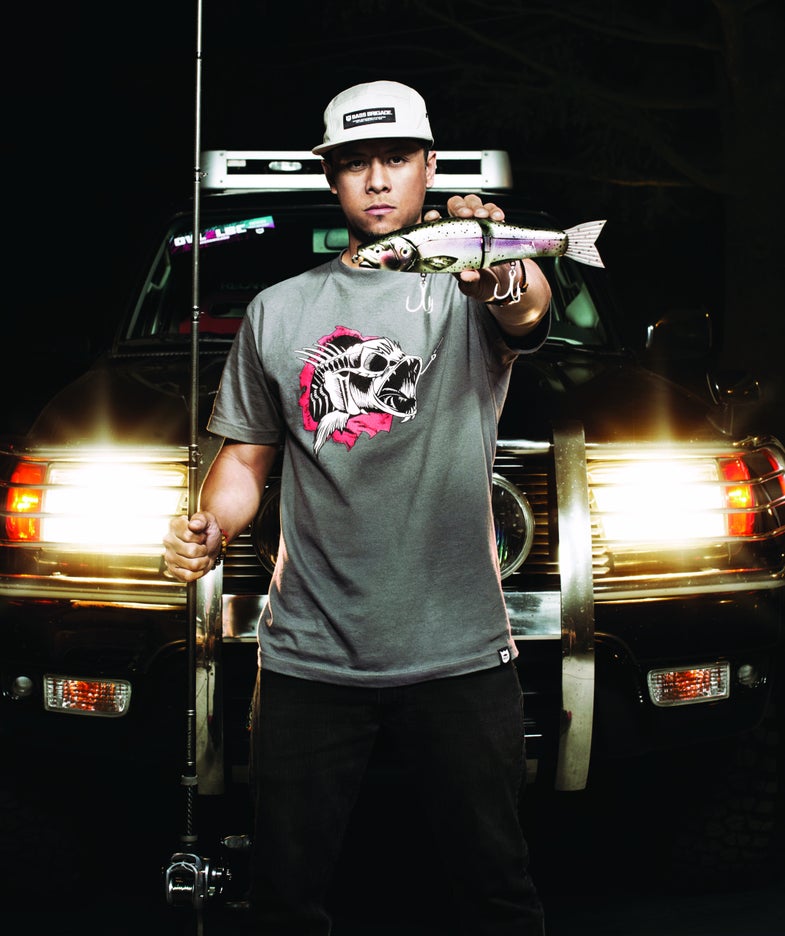 A water-bottle wrapper, the back page of a supermarket circular, and a plastic shopping bag float along the edge of Echo Park Lake. Traffic whizzes by on the 101 to the south and Sunset Boulevard (not the good part) to the north. Horns blare and music thumps. None of this seems to faze Lloyd Gomez, though, as he stalks the concrete shoreline of this small body of water tucked within the city limits of Los Angeles in search of largemouth bass.

“Yes, it can get loud fishing here. But these are the noises of my urban wilderness,” Gomez says. “Anglers in rural America hear birds, boats, crickets. We have horns, car stereos, buses, and the melody of tires rolling over bridges.

“Still, fishing is an escape no matter where you do it. I just happen to prefer fishing within the parameters of a street culture that defines who I am.”

Who Gomez is and what he looks like seem to be in stark contrast. A flat-brimmed hat hiding spiked black hair, slightly baggy jeans, and a black hoodie don’t shout “bass fisherman” to most folks. But his “Cast and Destroy” T-shirt offers a hint. The swimbait rod in his hand and backpack full of tackle make you wonder whether this b-boy (break-dancer to you and me) is really an outdoorsman. Truth is, he’s both. And the crew he fishes with, which has been dubbed the Bass Brigade (now a popular brand created by Gomez to promote urban fishing), is redefining what it means to be a bass angler. Tattoos, skateboarding sneakers, lip rings, high-fashion denim, and city-inspired design cloak this group of anglers who can go cast-to-cast with the best fishermen in the country, then walk into a hip-hop club without missing a beat.

From Break-Dance to Bill Dance

Gomez, 38, grew up in Modesto, California. His first passion was break-dancing, and in the late 1980s he was part of several hip-hop dance crews. Throughout his high school years, groups like U.F.O. and The Style Elements Crew (who continue to tour and perform with some of the nation’s top acts) were his second family. Street style, music, and the culture that surrounded these influences left an indelible mark on Gomez. Interestingly, so did a fishing television show.

“I remember it like it was yesterday. I came home and turned on the TV and ran across an episode of The Bassmasters on The Nashville Network, which is kinda funny because I wasn’t into country music at all. I was so intrigued by the show that I convinced my parents to buy me a rod and reel. Then, I taped every episode of every fishing show I could find. I became addicted to the sport of bass fishing.”

After school, Gomez would practice with his dance crew and then head home to fish a small community lake, usually until dark.
“That lake was surrounded by homes and buildings—very urban. But it had bass in it, and I learned how to fish there. I believe that’s why I still love fishing city lakes so much. It takes me back to my roots.”

Gomez didn’t learn the bass fishing ropes by himself, though. One of his best friends in high school and a member of his dance crew, Taylen Miguel, became hooked on the sport alongside him.

“You know how skateboarders can make anything their play space? As long as they have a rail, some steps, or a piece of concrete with an incline, they can do their thing. Well, that’s how Taylen and I feel about bass fishing. The water is our stadium,” Gomez explains. (That “stadium” line, incidently, has become the Bass Brigade’s mantra.)

“We’d hop over fences, walk miles up little creeks, slide through barbed wire—whatever it took to quench our thirst for finding bass,” Miguel says. “If an area was off-limits, we’d figure out a way to make it mostly legal. Apartment complex ponds, for example, could be good. We’d befriend someone in the complex, get their apartment number, and say we were roommates. When security guards would check us, they’d usually end up asking what we were catching ’em on.”

Fast-forward 20 years, and Gomez and Miguel, now Bass Brigade’s CFO, are considered the pioneers of the urban bass movement.

“In 2007, I was a creative designer for a footwear company. But I started making T-shirts for our small group of urban anglers,” Gomez says. “I played off of Tony Hawk’s Bones Brigade, because they had the same attitude about skateboarding as we did about bass fishing. They’d do anything to skate. Their passion inspired others. That’s how we roll—full throttle to find water that holds bass.”

The T-shirts Gomez made became highly sought-after, and the people who wore them became brand ambassadors that shouted a new message about bass fishing. A sport that many believed belonged to the plaid-wearing, Skoal-packing crowd was suddenly cool, urban, and relevant to population centers around the world.

“[Taylen and I] both have a love for music, art, street culture, dance, and bass fishing,” Gomez says. “Our goal is to fuse all of this together to create products that represent other anglers out there who have similar backgrounds. Our clothing line allows people to maintain a street identity while expressing a passion to fish. We want to inspire people to fish no matter where they live. There are countless bodies of water in urban settings that are killer.”

Echo Park Lake, despite the occasional floating trash, is a solid example. This inner city–L.A. fishery is stocked with rainbow trout several times throughout the year, and the bass there thrive because of it. Swimbaits launched from a concrete platform have resulted in double-digit fish days for Gomez. But the California Delta is the Brigade’s favorite place to deploy, and they frequent the section of this storied fishery that flows near downtown Stockton.

“We walk under the I-5 bridge, which is covered with graffiti, and hike down small alleyways of water. It’s a rough part of town, but that doesn’t stop us,” says Gomez. “I’ve had a homeless man ask me if he could have a bass I caught so he could eat it. One member of my crew had a bridge squatter demand he quit fishing because the pylon he was casting from was the man’s home. It’s definitely a unique angling experience.”

But Brigade members are a unique bunch. Alfredo Saldivar, a 25-year-old audio technician from Tracy, California, joined these street anglers a couple of years ago. He has been an avid bass fisherman for the past seven years, but you’d never guess that by looking at him. He is heavily tattooed with imagery that reflects the most important aspects of his life. A giant owl with guns as wings covers his chest and represents the wisdom and protection his father has offered him throughout Saldivar’s young life. He admits to making some questionable decisions in the past. Now, though, bass fishing gives him focus.

“When the Brigade gets together, we try to find little bodies of water we haven’t fished before. Sometimes there are fish in ’em, sometimes not,” Saldivar explains. “I remember one little pond that didn’t quite work out for me. I made an errant cast and my $40 swimbait landed in a tree on the other side of a slough. The water was the most disgusting cesspool of sludge, goose crap, and nastiness you can imagine. But I wasn’t gonna lose that bait. So I held my nose and waded across the chest-deep slough to retrieve the lure. It was like jumping down the hole of a Porta Potty. But, sometimes, you do what you have to do. That was one of my favorite baits.”

Then there are the seemingly unremarkable waterways that actually produce. “I found a slough near my home in Tracy that farmers use for irrigation,” says Saldivar. “It’s right off the 205 interchange and a short walk from an outlet mall. I caught my biggest urban bass ever from there—an 8-13.”

Brigade members not only go to extremes to fish, but also go to great lengths to get inner-city youth involved in the sport. “We joined a program in 2012 that introduces underprivileged urban kids to bass fishing,” Gomez says. “Our goal is to find kids who could very easily go down the wrong path—kids that are surrounded by drugs and violence—and introduce them to fishing. We take them to a private lake that’s filled with bass to get them addicted to fighting fish instead of each other. It’s amazing to see their passion ignite. Plus, they experience the brotherhood of the Brigade, the positivity and camaraderie, and realize that they can be a part of something healthy.”

Although many outdoorsmen have not heard of this type of fishing crew, urban bass fishing is not just a West Coast scene, nor is it unique to the U.S.

“We get pictures on Instagram all the time from remote Brigade members. I remember one from a guy in Austin, Texas, holding up a 10-pounder with the downtown Austin skyline in the background. And the movement has really gone crazy in Japan. Whether you are talking about Tokyo or Osaka, there are hundreds of little bodies of water there that hold fish. And those are just about the only outlets some Japanese anglers have to pursue their passion.”

Recently, Gomez received a message from a Facebook fan who lives in Spain. The man and his wife were coming to the States and wanted to experience fishing in this country.
“We took them out and had a blast. I didn’t understand a word they said, but fishing transcends language,” Gomez says.

So how do you prepare for a typical day of street fishing? Most of the time Brigade members are armed with just a couple of rods, a small backpack full of tackle, and a tank of gas. Rather than having to negotiate boat ramps, their main concern is finding open parking meters within walking distance of the water.

“There have been days when we’d start fishing little ponds in Modesto, then drive to downtown Stockton, and then move to Tracy if the fish weren’t biting. That’s, like, an 80-mile circle,” Miguel says. It’s the urban version of power fishing. Move until you find the fish.

And while traffic noise, floating garbage, and run-ins with security guards and the occasional ornery vagrant might be considered downsides to the urban fishing experience, there are benefits, too.

“Dude, we can walk across the street and grab an In-N-Out burger if we get hungry,” Miguel explains, “Or hit Starbucks if we need a little caffeine boost.”