10 bows and a day in a sound chamber. 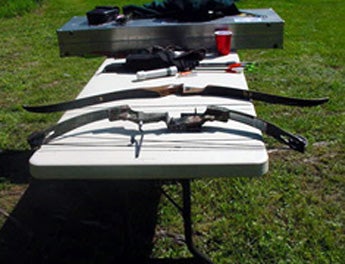 This test was set up to find the quietest bows currently on the market. We asked each company to send its quietest 70-pound, 30-inch-draw bow. The first round of testing was done with only a New Archery Products QuikTune 3000 rest and a nock set attached. A second test was run on each bow with string silencers installed.

Bow noise testing was conducted using a studio microphone connected through a sound card to a signal analyzer. A relative noise level was determined for each bow based on the test data. The equipment recorded the first 80 milliseconds (.08 seconds) after the string was released. (When a bow is fired an arrow stays on the string an average of .016 seconds.) I shot each bow several times in order to obtain an average reading. All testing was done during a single day without changing the test setup.

The arrow used was a Beman Carbonmetal Matrix shaft. With the point the arrow weighed 487 grains. It was unfletched because I wanted to reduce any noise that could be attributed to fletching contact with the rest. The shaft weighed almost exactly seven grains per pound of draw force, which is a typical arrow weight for most whitetail deer hunters.

I tested the bow right out of the box and with Sims String Leeches installed, because I felt it was valuable to know the noise levels of the bows when string oscillation was reduced. A position indicator assured that every shot was taken the same distance away from the microphone. I personally shot each bow to assure that consistent grip pressure was used throughout the test.

Bow noise results from the maximum amplitude of the initial sound of the bow limbs, the string coming back to its undrawn position and the amount of time it takes for the sound (vibration) to stop. To account for these elements, I used the average amplitude of all shots fired for each bow and the shape of the noise versus time curve to come up with the decay curve. This was done for each bow configuration. The bow that produced the smallest area represented the quietest bow. The data correlated very well with what I heard while doing the test.

There is a lot of variability in bow noise. For example, the same bow on back-to-back shots often had a slightly different noise level. And there is no question that two identical bows off the production line can have different noise levels. Be that as it may, of the bows I tested, none was quieter right out of the box than the Alpine SS Stealth. Here are the details on the top five.

Alpine SS Stealth
I knew immediately when I shot this bow that it was the quietest. When the bow was decked with string silencers to remove string oscillation, the Relative Noise Level dropped from 5.31 to 3.42-only slightly louder than someone clapping his hands from three inches apart. This is a very quiet system. The SS Stealth has a 36-inch axle-to-axle length and weighs 3.5 pounds. It features a 6.75-inch brace height, and at 259 fps it is among the fastest bows in this test.

Mathews Legacy
This new Mathews is not only one of the quietest bows on the market, but at 259 fps, it’s also a very fast one. The Legacy sports two innovations: a Cable Roller system that eliminates the need for a cable guard slide, and String Suppressors, which make the bow very quiet right out of the box. The Legacy possesses a low recoil design for comfortable shooting. It has an axle-to-axle length of 34 inches and a brace height of 7.5 inches.

PSE Enforcer
While PSE’s new Enforcer makes the top five out of the box, it shines even brighter when string silencers are installed. The Enforcer is equipped with PSE’s NV System, which is a vibration and noise-absorbing donut found on each limb bolt. It has an axle-to-axle length of 34 inches and a brace height of 8 inches and weighs 4.1 pounds.

Hoyt VorTec
Unfortunately, the Hoyt bow wee intended to test never arrived. As a result, I had to improvise by using one I found in the shop. It was a VorTec from the 2001 line. The VorTec I tested is very comparable to Hoyt’s 2002 CyberTec, which is purported to be even quieter. With silencers installed, the noise level of the VorTec dropped from 6.47 to 2.10, making it the quietest of all bows tested in that configuration.

McPherson 38 Special
With a speed of 260 fps with our test setup, the 38 Special was the fastest of the top five bows we tested, and at 38 inches, it was also the longest. The bow has a brace height of 7.25 inches and weighs 3.9 pounds. The 38 Special features McPherson’s exclusive VibX system, which is installed between the stabilizer insert and riser to help the bow soak up vibration and noise.