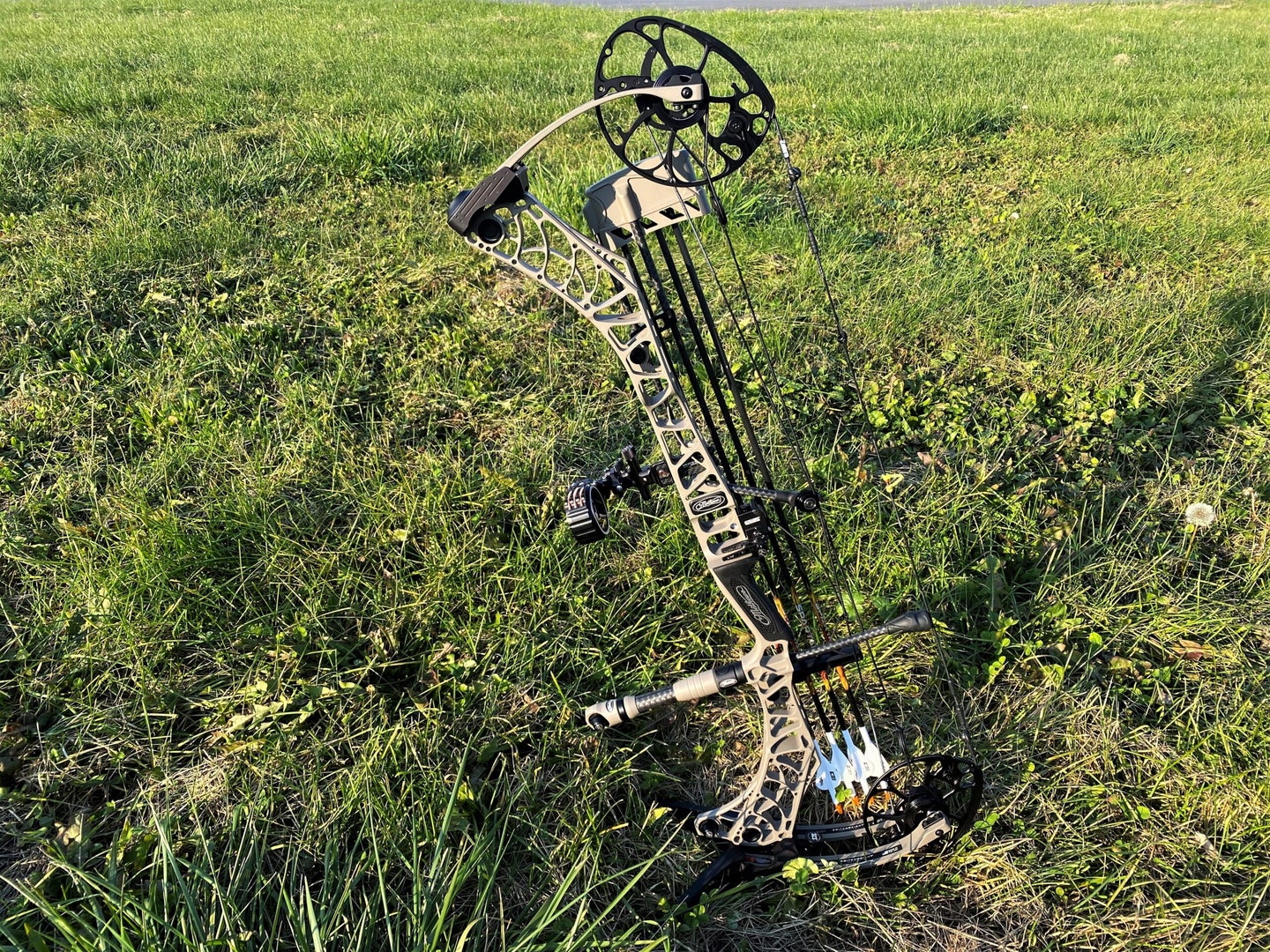 As a compound bow manufacturer, how do you follow up one of the best compound bows of 2021? If you’re Mathews Archery and you’re coming in to 2022 on the heels of the wildly popular V3, you ride that pony for another year, making minor tweaks that are designed to attract new customers and to sell a boatload of accessories. Meet the Mathews V3X.

The V3X is available in slightly different lengths than the V3, and it has some interesting new features that make this bow one of the slimmest I’ve seen when fully rigged. Also, it’s the nicest shooting compound bow I’ve ever tested.

The V3 of 2021 was a smooth-shooting, accurate, dead-in-your-hand bow that Mathews sold by the truckload last year. Available in axle-to-axle lengths of 27 and 31 inches, it was easily one of the nicest shooting bows on the market last year—it drew nice, held nice, and was fast enough. I watched customer after customer in the Lancaster Archery Supply pro shop shoot the V3 next to a host of other bows, and they almost invariably picked the V3.

I distinctly remember two customers who came in saying from the get-go that they would not buy the V3. They did a quick about-face when they insisted on shooting the V3, just to see what all the hype was about, and discovered that was the bow they liked best.

Both models use the same cams as the V3 and both employ the V3-introduced, downward-angled cable arm called the “Centerguard” cable containment arm, which puts the cable rollers in the middle of the string so that the load from the cables put on the top cam is equal to the load put on the bottom cam. That helps the cams perform identically.

Both V3Xs also maintain the long risers employed by the V3s. The risers are just a tick shorter than the bows’ overall axle-to-axle lengths. That helps them to hold like a dream at full draw. The risers are long and rigid, which are qualities that target archers look for in a good compound bow.

Recognizing their golden goose, Mathews once again utilized its Switchweight module system for the V3X. With this system, draw length, draw weight, and letoff all are controlled by mods attached to the cam. If I want a bow that shoots 60 pounds max, with a draw length of 29.5 inches and 85 percent letoff, there’s a specific mod that meets all those specs.

Then, if I want to change that same bow to a 70-pound max draw weight, with a 30-inch draw length and 80-percent letoff, all I have to do is find the module that meets those specs and swap them for my originals. There’s no changing limbs to change the peak draw weight, no sliding draw stops to affect letoff, and no rotating modules to change draw length. The Switchweight mod system is a stroke of genius.

The Mathews V3Xs maintain the dovetails cut into the backs of the risers for mounting integrated arrow rests. These rests clamp onto the dovetails, which eliminates the need for a traditional rest arm and mounting bolt that screws into a Berger hole on the side of the riser.

Turns out, the integrated rest mounts Mathews first put on its flagship compound bows a few years ago was the initial step in an effort to streamline bow accessories. And this is where the V3X really takes flight.

Besides the rest, the other bow accessories that typically mount to the outside of a compound bow are the sight and quiver. Last year, Hoyt came out with a Picatinny rail attached to the front of its risers to which a bow sight can be attached, which eliminated the need for bolting a sight arm to the side of the riser.

With the V3X, Mathews took that idea a step further and cut a dovetail hole through the center of the riser. Any sight with a standard dovetail extension bar can be slid into that hole and held in place via set screw. Besides streamlining the bow, Mathews says this mounting system helps quiet sight bar vibration since it’s contained within the riser.

Of course, this system only works with sights that have the dovetail bars: Axcels, Spot Hoggs, CBEs, etc. Sights that mount directly to bows will not work with this system and still must be bolted to the side of the riser.

So, with the sight mount and the rest mount removed from the side of the bow, Mathews was able to pull the quiver tighter to the bow.

Let’s face it, some of those bow-mounted quivers stick out a good bit from the riser, causing the bow to want to tip in that direction. It’s then up to the archer to counter that tipping action either through hand pressure on the bow grip or with a side rod mounted opposite the quiver.

Additionally, Mathews now has low-profile quivers, and there’s a two-piece version that’s permanently affixed to the bow and a one-piece version that is detachable. Both sit tight against the riser, with part of the broadhead hoods actually recessed underneath the limbs.

I’ve never seen bow-mounted quivers this narrow before, and as already mentioned, a kitted-out V3X is as narrow a compound bow as I’ve ever seen. Bowhunters who are concerned about the profile of their bows will love the compactness of the Mathews V3X.

Another accessory tweak Mathews made with the V3X is the addition of small posts in two places on each cam. These posts are intended to hold Mathews new Stay Afield System. It’s basically a portable bow press that will allow a bowhunter to make string and/or cable repairs in the field.

What’s most ingenious about this new accessory is that it’s a simple length of looped bowstring material. It weighs nothing. There are several in-the-field bow presses on the market designed for backcountry bowhunters, but the Mathews Stay Afield System is lighter than all of them by a long shot.

All you have to do to attach the Stay Afield System to work on the bow string is to take four turns out of the bow’s limb bolts, then squeeze the string toward the riser until the corresponding cam posts rotate enough to accept the loops at each end of the SAS. Once the system is attached, the string is now slack enough to be removed.

To attach the SAS to work on the cable, you squeeze the cables toward the riser until the cam posts closest to the cables rotate enough to accept the SAS string loops. Once it’s connected, there is now enough slack to remove the cables. Simple, yet effective.

For my review of the Mathews V3X, I borrowed a V3X-33 from Lancaster Archery Supply. It had a draw length of 29.5 inches and a draw weight of 70 pounds.

With those specs, my bow launched a 477-grain arrow at a speed of 283 feet per second through the Lancaster Archery shop chronograph. That’s about what I expected from that bow shooting that arrow. That’s plenty fast enough for me.

For me, the V3X-33 is the perfect bow. I like a longer bow, and this one—with its super long riser—felt like a 35-inch target bow. It holds like a dream. I put the sight pin on the target and it stayed put. In a matter of minutes after I first shot this bow, I was shooting three-inch groups at 50 yards.

It draws nice, it holds nice with 85-percent letoff and you barely notice the bow fired after releasing the string. There simply is no hand shock.

The Mathews V3X continues a tuning feature that I have come to love in Mathews bows: the Tophat system. Tophats essentially are spacer tubes that go on your cam axles and feature ends of different thicknesses so you can move the cams left and right as you’re tuning. It’s a simple, solid way to move cams to dial in the bow’s tune.

Being honest, however, I wish every bow came with a Tophat kit, which consists of two sets each of three different sets of spacers. To potentially have to pay an extra $50 to buy this kit to get my bow tuned to my shot is not cool. If I’m dropping $1,200 on a new bow, I should get a bow that I can tune to my shot for that price: not for an extra $50.

The bow that I tested was fitted with an Axcel sight mounted in the riser, a QAD Integrate drop-away rest and the detachable Low Profile Quiver. You don’t realize how “fat” your bow is until you’re able to slim it down. I noticed the difference, and I liked it.

I tried the Stay Afield System, just to verify for myself that it works as advertised. It does. I removed my string and my cables without issue. And again, kudos to Mathews for coming up with something so simple to address issues that could end your hunt.

Where The Mathews V3X Is Lacking

Mathews kind of sets a trap with the cool new features of the V3X. You have to have the right accessories to take advantage of them, and unless you already have an integrate rest and a sight with a dovetail bar, you’ll need new ones. And there is no quiver on the market that will mount to the brackets intended for the V3X except for the Mathews Low Profile Quiver. Add that to your shopping list.

I’m sure there are plenty of DIY archers out there who will figure out how to make their own Stay Afield System rope, but for those who don’t, you’ll also have to buy that from Mathews.

There’s no question you can take everything off whatever old bow you have and plant them on the V3X. Those accessories just might not allow you to take advantage of the new features of the V3X.

What The Mathews V3X Does Well

Everything. The Mathews V3X-33 that I borrowed is the nicest shooting compound bow I’ve ever shot. It does everything the way I like a compound bow to work.

I expect to see bowhunters shopping for new bows prefer the feel of the V3X over other bows. It’s just that nice to shoot. Most bow sales are done with the 5-yard test, as I call it. Buyers stand 5 yards from a target in a pro shop and take shots from different bows. In that test, the only thing the customer can gauge is how the bow feels in the hand, and the V3X feels as good as anything out there.

It’s actually a shame that’s how many bow sales are completed, because if an archer could take a Mathews V3X out and shoot it at distance, I think then they’d also find out how well it drives tacks. Especially the V3X-33.

If you didn’t buy a V3 last year for one reason or another, the Mathews V3X just might be what you’re looking for. If you’re like me, and your heart doesn’t race when you see a 27- or 31-inch bow, I think you’ll be pleased with the 29 or 33-inch versions.