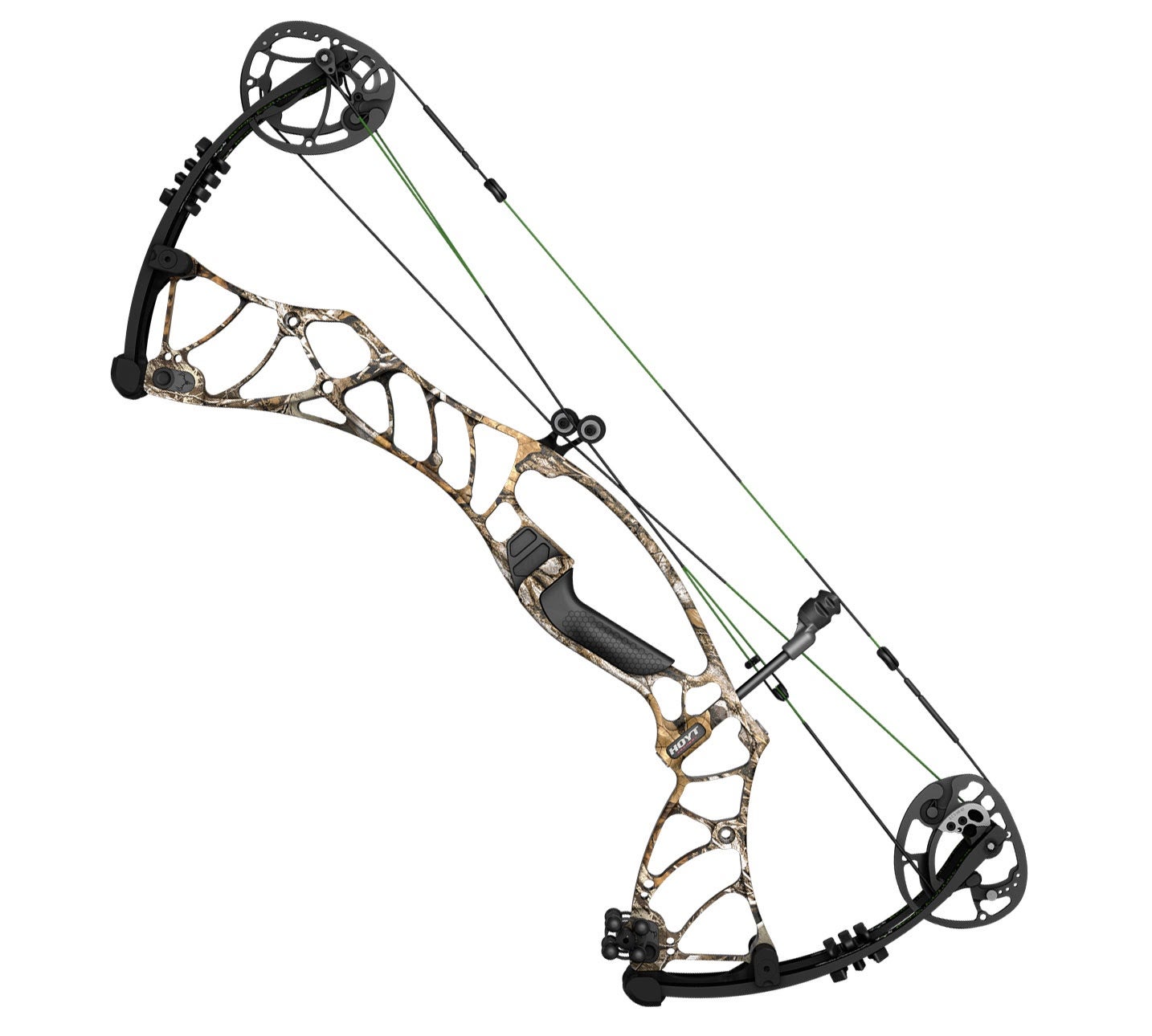 When the Hoyt Helix Turbo arrived on my doorstep, I wasn’t sure what to expect. I’m not a big speed bow freak for bow hunting. Give me a long, heavy, and generous brace-height tack driver any day of the week and twice on Sunday. The Helix Turbo is a flamethrower. The bow is branded with an fps rating of 350, fitted with a 5 7/8-inch brace height, and measures 31 inches axle-to-axle bow. I found that this was a solid, do-it-all bow that was surprisingly easy to shoot accurately.

Who is the Hoyt Helix Turbo Designed For?

I’ve been a fan of Hoyt bows since I fired carbon through one more than 15 years ago. Since that time, I’ve tested and hunted with many Hoyt hunting bows — the Katara, Alpha Max 32, Carbon Element, and Axius Alpha — to name a few. I love Hoyt’s dedication to innovation and building durable bows that tend to provide a healthy balance of accuracy, speed, and a vibration-free shot. The Hoyt Helix Turbo is a good representation of the Hoyt compound bow brand. It’s a compact bow, that would be ideal for mountain hunters who want to stalk without their bow hanging up in the timber, but it’s equally useful for stand hunters shooting out of the tight confines of a blind or stand.

I’ve tested hundreds of compound bows. I love the process of testing hunting bows, and it’s always exciting to see innovations at work. I’ve been disappointed a few times — tested bows that didn’t live up to the hype. Of course, most often, the bows work as I expect. New technologies perform as advertised, and the bow is everything it should be. Then, there are those rare times when I’m shocked by a bow’s performance and fall head over heels in love with it. I was hoping this would be the case with the Hoyt Helix Turbo.

But before I really dig into a bow and get into the tuning process, I like to spend time getting to know the bow. The only way to do that is to shoot it. Putting 50 or 60 arrows through the bow helps get string stretch out, and in my opinion, makes the tuning process easier. For a speed bow, the Hoyt Helix Turbo drew with a gentle smoothness I didn’t expect. I tip my hat to how the ZT (Zero-Torque) Pro Turbo Cams and Roller Cable Guard work in harmony. Weight builds quickly, but the transition to letoff is not at all abrupt. The draw stops contact the bow’s inner cable and provide a firm but not rock-hard back wall. I was pleasantly surprised that the ZT Pro Turbo Cams weren’t itching to spring into action. I’ve shot more than one cam system designed for speed that, if you crept at all, would want to pull your shoulder through the riser. This cam isn’t like that. I could settle into my anchor and focus on aiming. I’m a back-tension release shooter and I loved the feel of the draw stops against the cable. I could pull into my release while pressing into the grip and execute a solid shot.

Going along with the smooth draw cycle and pleasant full-draw feel is how hushed and vibration-free this bow was at the shot. It doesn’t feel like a speed bow. When the release breaks, the arrow is gone, but the bow sits like a well-trained retriever. I detected no post-shot hand vibration, and the rig is quiet. This is without question the most controlled speed bow I’ve shot top to bottom. I will note that I was shooting heavy (466.8-grain) Easton FMJ 5MM arrows, which undoubtedly helped with the quiet shot. However, I also give some noise- and vibration-canceling credit to the Shock Pods located on the bottom of the riser just above the limb pockets. And as previously noted, the dampeners between the limbs soak up a fair amount of vibration as well.

Like most Hoyt bows, the Hoyt Helix Turbo was an out-of-the-box stunner. The riser was cloaked in Realtree Edge, and the Helix Turbo stamped limbs were black. The bow passed the eye test. There were zero dings, nicks, or paint chips, and its appearance was sleek and compact. Dampeners rest between the top and bottom split limbs, and the Roller Guard is slim and hugs tight to the riser.

One of the first things I like to do, even before I start setting the bow up, is close my eyes and lay my hand into the grip. How a bow feels in hand from the get-go is super important. I’ve gripped many bows and known from the start we weren’t going to get along. That wasn’t the case with the Hoyt Helix Turbo. Not a direct-to-riser grip, the X-Act Grip System is thin, perfectly angled, and flat-backed. The throat isn’t too deep, and my palm fell into the grip perfectly.

The ZT Pro Turbo Cam comes in a pair of draw-length option modules (26- to 28-inch and 28- to 30-inch), and I had no trouble setting the bow to a 29-inch draw length via the A-E draw-stop holes. As for draw weight, I’m not as young as I once was, and one complete revolution of the top and bottom limb bolts set my draw weight at a measured 67.74 pounds. The limb bolts turned easily and there was no chatter, popping, or sticking. The bow pressed like a dream and the setup process was simple. Accessories attached with ease, and I had no trouble with any pre-drilled screw holes. The Fuse string did cause some peep rotation, but removing the string from the top cam and giving it a quarter left turn fixed the problem.

Sometimes you have to turn the yokes, and some bows are more difficult to tune than others. What I’ve found, though, is after the break-in period, about 80 percent of all tuning can be done by changing the nocking point and manipulating the rest. The Hoyt Helix Turbo tuned up with ease. I did change the nocking point, as I found the ideal position for the attached QAD UltraRest MXT was to run the arrow slightly downhill. After changing the nocking point by removing and tying on a new d-loop, I made some rest modifications and shot a perfect bullet hole through paper. Walk-back tuning was a breeze, and from a distance of 30 yards, I stacked a field point, SEVR 1.5 mechanical, and a QAD Exodus fixed-blade in a dangerously tight group.

During the tune-up phase, I always conduct a speed test, and the Hoyt Helix Turbo propelled my Easton FMJ 5MM shafts at 301 fps. That’s smoking for this arrow setup and the poundage I’m pulling. Note this fps rating is a far cry from the advertised 350 fps. Remember, that number is for archers shooting maximum poundage, a maximum draw length of 30 inches, and firing an arrow sporting the bare minimum GPI (grains per inch) rating.

I don’t pretend to be an engineer, and can’t say precisely why a bow that measures a mere 31 inches between the axles holds and balances as well as this one does. Truthfully, it doesn’t matter. The point is, the Hoyt Helix Turbo holds steady on target and that helps you shoot it more accurately. I shot field points, expandable broadheads, and fixed blades out to 80 yards and was impressed with the accuracy of this bow. No, I didn’t feel as rock-steady in a stiff breeze as I do with my 33-inch axle-to-axle Hoyt Ventum 33. And, my groups were better between 60 and 80 yards with the Ventum 33, but overall, I give this bow a nod of approval in the accuracy department.

When the pin isn’t bobbing and weaving all over the target it’s easier to relax and focus on executing a good shot. I also found that even when I bailed out of a shot early or didn’t execute to the best of my ability, the bow was forgiving. That’s impressive for the short brace height measurement.

When an archer doesn’t have to sacrifice accuracy to get speed, it’s a win, and that’s the case with the Hoyt Helix Turbo. With a faster bow, pin gapping shrinks and those shooting single- or multi-pin moveable sights can get more yardage out of their tapes. Along with the previously mentioned arrow, this bow produced a kinetic energy rating of 93.73 foot-pounds. That’s incredible, and more than enough to bring down the largest game animals in North America.

Does the Hoyt Helix Turbo Accomplish Its Mission?

Fitted with several worthy Hoyt compound bow technologies, balanced, accurate, and fast, this hunting bow should be on your radar. Its compact size and not-too-light but not-too-heavy 4.4-pound build are perfect for the western mountains and the eastern hardwoods. It’s a do-all type of bow. At the beginning of this review, I mentioned that there are some bows I’ve tested and simply fall in love with. The Hoyt Helix Turbo is one of those bows, and I can’t wait to tote it afield this fall.