The blazing-fast 28 Nosler is the newest hot rod 7mm round.

The Patriot is a well-balanced rifle that points more nimbly than its weight might indicate. Photographs by Bill Buckley

The Nosler family continues to build on its legacy with the introduction of another flat-shooting cartridge bearing its name.

Last year, it was the 26 Nosler, a 6.5mm rocket that ended up earning Outdoor Life’s coveted Editor’s Choice award in Nosler’s Patriot rifle. The appeal of that round was easy to see. For open-country hunters who want to be able to reach out to great distances to take game, it is a good choice. It also found traction with shooters who simply wanted the quickest 6.5 in town. In line with the philosophy that says you can never be too rich, too blonde, or too thin, cartridges are rarely penalized for being too fast.

The fact that Nosler is using the same parent case—the .404 Jefferies—for a slightly larger 7mm (.284 inch) bullet for the 28 Nosler should come as a surprise to no one. From the day the 26 Nosler was announced, the company said it got calls to do it in a 7mm round, and for 2015 they were happy to oblige. The cartridge is debuting in a number of Nosler’s rifles, including the Patriot.

Proven Action
The Patriot is built on Nosler’s M48 action, which is an excellent design, particularly for big-game hunting rifles. It is a two-lug, push-round-feed mechanism with a Sako-style extractor and plunger ejector in the bolt face. The bottom of the action is flat and has two stout recoil lugs that fit snuggly into the glass-bedded recesses in the Patriot’s synthetic stock.

All the metalwork on the Patriot is top-notch. The finish is even and smooth, and everything on the action works perfectly. The rifle cycles and loads easily, and reaching for the trigger or the two-position safety is a natural action that requires no groping around. I never had any malfunctions with this rifle or any of the other half dozen or so rifles based on the M48 that I’ve shot over the years.

The flat surfaces on the sides of the M48 give it an elegant look, and the one-piece bottom metal with a hinged floor plate magazine is an additional refinement typically found on high-quality rifles.

The trigger on my rifle tripped consistently at 2 pounds 14 ounces, with less than a one-ounce difference measured from pull to pull on my digital gauge. The trigger had no discernable take-up and a crisp, clean break.

The stock is tough, well proportioned, and not overly heavy. Mine tipped the scales at 2 ¼ pounds. It has a raised cheekpiece on the left-hand side and is fitted with a cushy Pachmayr Decelerator butt pad. There is no checkering molded into the fiberglass, but between the slightly rough texture of the gray fiberglass and the black spiderwebbing on top of it, the stock offers plenty of grip.

Historically, the accuracy I’ve seen out of these rifles has been quite good too, but this is where the 28 Nosler stumbled. Try as I might, I couldn’t get the Patriot to group much better than 2 inches with the single factory load I had available for this evaluation, which was the 175-grain AccuBond Long Range. Nosler is also offering the 28 Nosler with a standard 160-grain AccuBond but didn’t have any on hand for me to test.

The group sizes were consistent no matter whether I shot the rifle off sandbags, using a bipod, or in my Lead Sled. I even ran an extra 40 rounds through the rifle to see if some additional barrel fouling would improve matters, which it often does, but my 5-shot clusters stubbornly refused to close up.

Now, a 2 MOA rifle isn’t the end of the world, but for a long-range hunting rig, which this 28 Nosler aspires to be, it is limiting.

Speed Demon
Nosler publishes a muzzle velocity of 3,125 fps for the 175s, but this figure is conservative. My rifle spit its bullets downrange at an average of 3,175 fps, which is smoking hot. This outperforms 175s in the 7mm Rem. Mag. by 315 fps and in the 7mm Wby. Mag. by 105 fps, placing the 28 Nosler at the top of the charts for the 7mms when it comes to speed.

In addition to a fair amount of recoil, this buys you impressively flat-shooting performance. Sighted 2 ½ inches high at 100 yards, the 175s only drop 3 ½ inches at 350 yards, which takes the guesswork out of hitting the vitals on a deer or elk for all but the most extreme shots.

The 28 Nosler is not for hunters and shooters who are new to the game. But for the rifleman willing to put in some practice and to experiment with reloads (Redding is making dies), this 7mm will take down any animal you care to hunt. 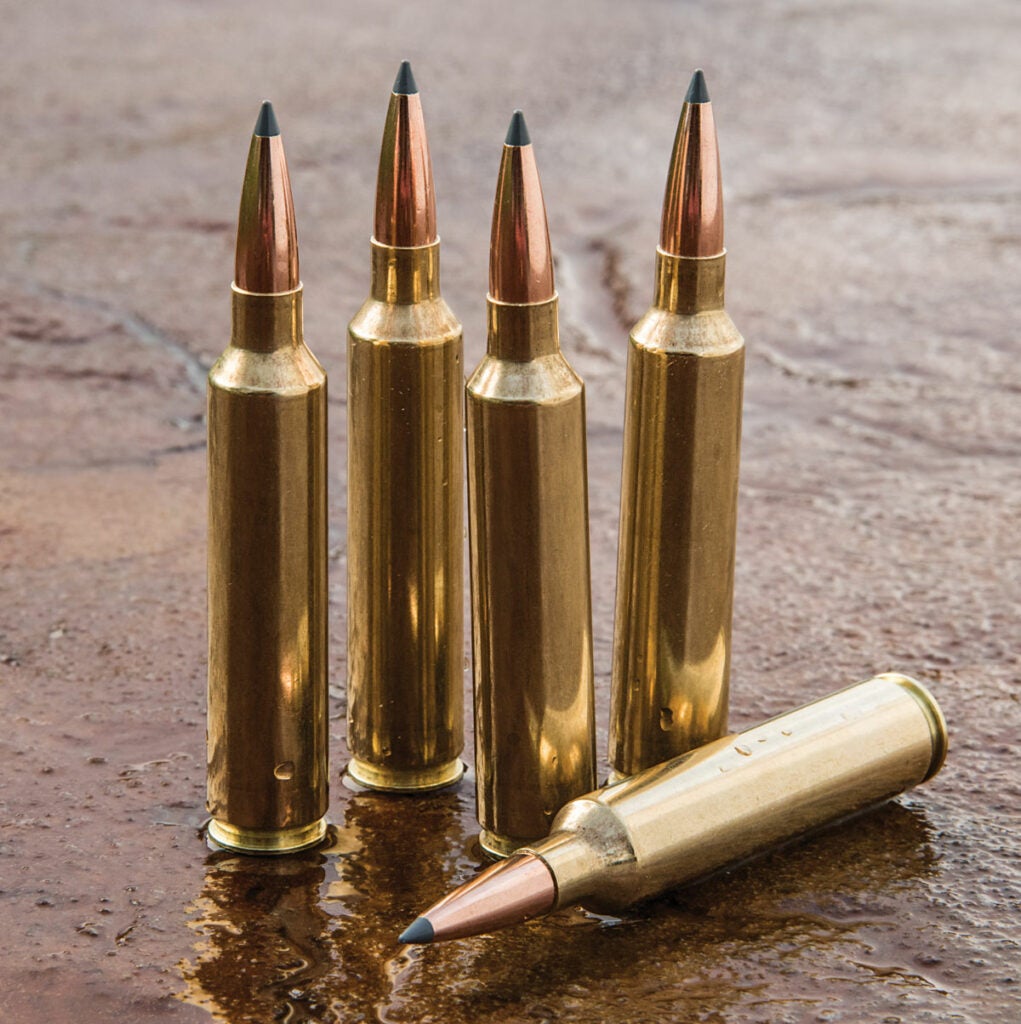 The 28 Nosler is the latest 7mm Magnum with the profile of a ballistic missile. It joins the ranks of cartridges such as the 7mm Rem. Ultra Mag., the 7mm Lazzeroni Firebird, and the 7mm STW. It is currently the fastest standard commercial 7mm produced.

The bolt on the M48 can be taken apart and reassembled in the field without the need for any tools. So should the rifle take a mud bath and require maintenance, gaining access to all the critical recesses that would need cleaning is a snap.