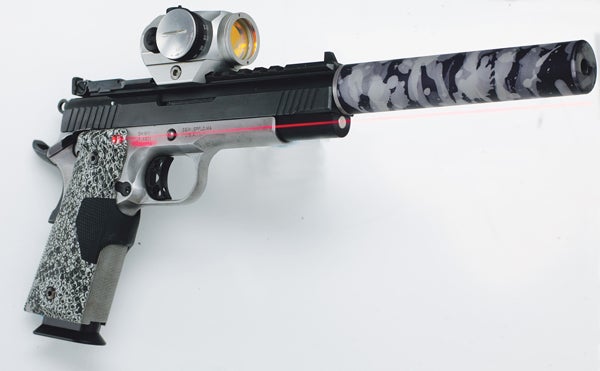 When conversing with gun enthusiasts who happen to live in Europe, it isn’t hard to feel a touch superior. Battles might rage in this country over the Second Amendment’s meaning and scope, but the fact is that we have a Second Amendment to fight about, which is more than they can say. But in one regard, our European counterparts have it better than we do.

Talking with a friend and fellow hunter from Finland not long ago, I mentioned that I was having a pistol built with a suppressor and started to detail the steps involved in acquiring a “sound moderator,” as the Brits sometimes call them. He was shocked. Access to and the use of sound suppressors in his homeland is not only easy; it’s officially encouraged. The same is true in other countries as well. In Britain, in fact, it can be illegal in some instances not to use a suppressor while shooting.

Compare that with the attitude in the United States, where suppressors have long contended with a criminal and nefarious stigma–a combination of Hollywood propaganda and the inclusion of suppressors in the National Firearms Act of 1934, which also regulated the possession of fully automatic firearms, short-barreled rifles and shotguns, and what are called “destructive devices.”

Notice that they are “regulated” and not “prohibited.” That’s another common misconception, even among gun owners. As shocked as my Finnish friend was about the difficulty of obtaining a suppressor in the U.S., I’ve encountered gun owners here who were equally surprised that you can own one at all. In fact, all but 11 states allow for civilian ownership of suppressors.

Spend much time around old shooters and you’re sure to see someone cup a hand behind one ear when you start to speak, a move known in some circles as the NRA salute. Hearing loss is a serious health problem, and beyond the obvious quality-of-life issues, it is a real safety concern. The inability to hear range commands, or your buddy walking up to you in a grouse thicket, can have tragic consequences.

Then there’s the matter of noise pollution. More than one gun club has been shut down due to the noise generated by gunfire, and countless others have had to spend piles of time and money fighting off challenges from unhappy neighbors.

Few states permit hunting with suppressors, which is a shame. A muffled report can create more opportunities for follow-up shots on wounded game and protect the hearing of our hunting dogs and companions in the field.

This pistol started life as a Smith & Wesson ProSeries 1911 in .45 ACP with a blue frame and matte stainless slide. I told Tom Hines at Tactical Solutions that I wanted his help to create a race-gun-inspired .22 shooter that would make any 1911 fan drool.

Hines started by bead-blasting the frame, bringing it down to bare metal and adding a blued .22 slide and barrel, reversing the pistol’s original color scheme. Because the sights are on a rail that attaches solidly to the barrel, the pistol has an accuracy advantage over designs with slide- or frame-mounted sights. In any event, Hines augmented it with an Aimpoint Micro R-1 red dot that clamps onto the Picatinny rail located between the open sights.

Not to be outdone, we reached out to Wade Stevens at Crimson Trace to add Lasergrips to the equation (which, as Hines dryly noted, gives me a third way to miss). In keeping with the pistol’s color scheme and custom flavor, Stevens sent one-of-a-kind grips in a slick black-and-white lizard-skin pattern.

A handy benefit of the red-dot/laser combination is that once the red dot is sighted in, it is easy to move the laser right onto target by dialing it to intersect with the red dot (or vice versa).

To complete the gun’s look, Hines anodized the suppressor with a gray, silver and black splatter camo scheme. The suppressor adds just over 3 ounces to the gun’s weight and improves how it handles by reducing the already minimal muzzle flip to practically nothing. Obviously, it also cuts down on the sound signature, to the point where additional hearing protection isn’t required, but not to the barely audible “phut” noise you hear in movies and on television, which is so much Hollywood garbage. Any bullet traveling faster than the speed of sound generates a sonic boom, and even with sub-sonic ammo, you can still hear the report, since not all of the gasses generated are contained by the suppressor. Then there’s the cycling of the action, which generates noise too.

To make the 1911 run better, Hines replaced the trigger and tuned it to break at just under 31⁄2 pounds. The Tactical Solutions magazines that feed the pistol are machined from aluminum billets and are built with impressive precision. While they are billed as 10-round magazines, mine both run flawlessly with 13. After the last shot from one, a tab flips out to activate the slide stop, which is an unusual (and cool) feature on a 1911 rimfire conversion.

And the gun does run very well indeed. It can digest a brick of ammo faster than any other .22 I’ve had. Whether you’re practicing action-pistol drills, slow precision firing or just blazing away in a joyful fit of plinking, this pistol is the very definition of pleasurable shooting. And that it pleases in such a quiet and well-mannered fashion–well, it’s hard to object to that.