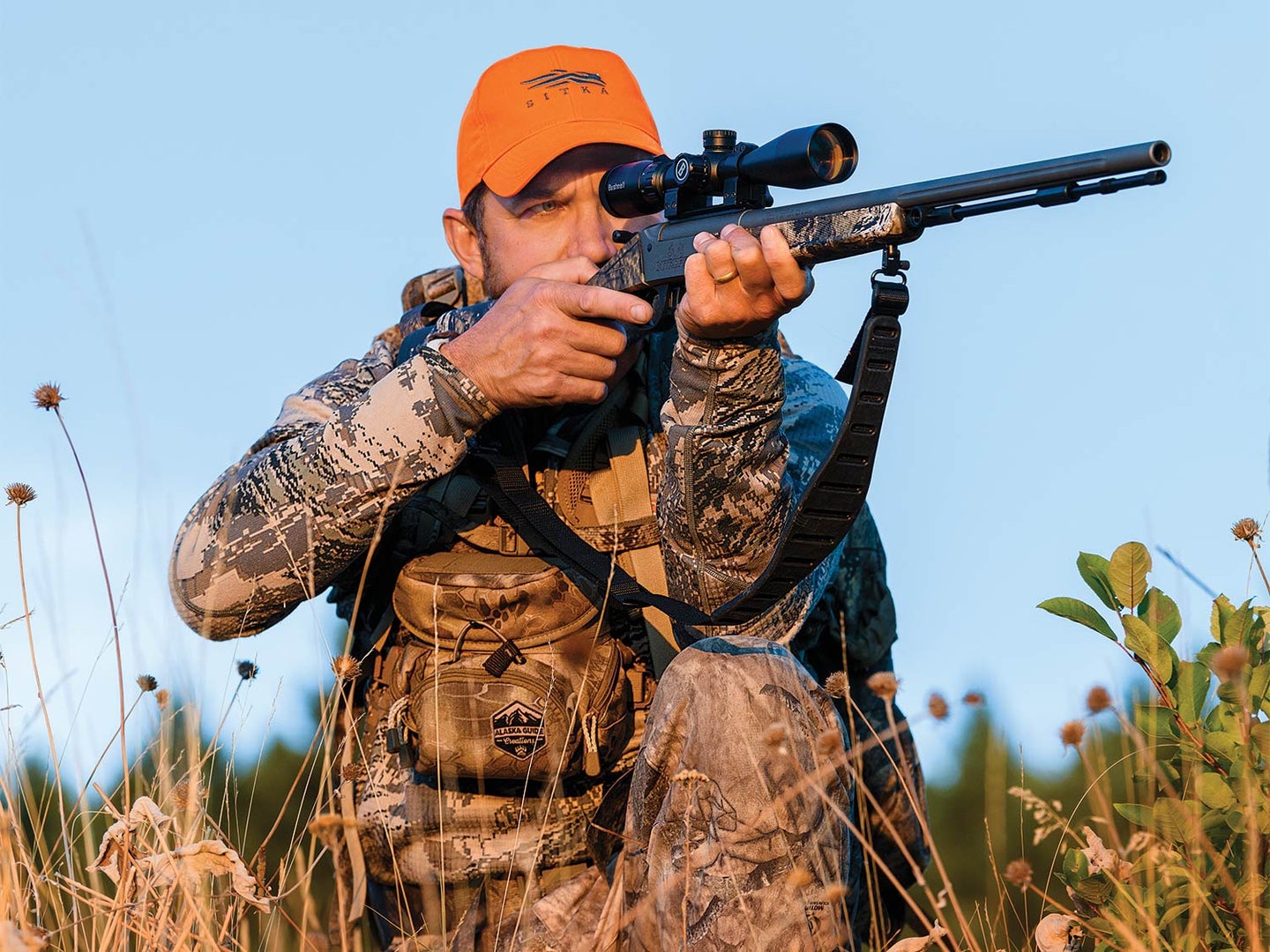 Probably the first great leap forward in muzzle­loader technology occurred in the 1700s, when Pennsylvania gunmaker Martin Meylin added rifling to his barrels, creating the first long rifles (known as Pennsylvania or Kentucky long rifles). Those spiral grooves stabilized projectiles and extended their ­effective range. This was a major leap forward from smoothbore muskets, which could shoot accurately to only 50 yards or so. Since then, muzzleloaders have continued to evolve, with improved ignitions, propellants, projectiles, and design.

In 2020, Federal Premium Ammunition introduced the FireStick, an encapsulated propellant that is easy to load and impervious to the elements, and that allows a break-­action ­muzzleloader to be charged or uncharged within seconds. The FireStick uses a new Hodgdon blackpowder substitute called Triple Eight. The extruded propellant is cut to maximize surface area, so it ignites and burns rapidly and efficiently. The FireStick is recessed on the back to allow you to insert a 209 primer for ignition before charging the rifle.

Traditions Performance Firearms was the first company to produce a muzzleloader for the FireStick system, calling it the NitroFire. As with other muzzleloaders, you load the rifle by ramming a bullet down the barrel. A small raised shelf on the inside of the bore controls how deep the bullet goes. The encapsulated powder loads through the breech and sits directly under the projectile. The design provides a fast, safe, accurate, and consistent shooting system that is easy to maintain (because it’s cleaner). Having shot close to 100 FireSticks during my initial field tests, I found it simplified the muzzleloading process by eliminating the accessories conventionally needed for dealing with propellant. Normally when a company brings something new to market, it’s bigger, stronger, and faster. The ­benefit of the FireStick is simplicity and convenience while retaining the same velocity and energy of existing blackpowder replacements, and delivering repeatable results.

Back in 1985, Tony Knight developed the first modern mass-produced in-line muzzleloader, the MK-85. It was the first production rifle to offer consistent ignition, accuracy, and safety with a No. 11 percussion cap. Since then, muzzleloader manufacturers have raced to design better systems and components to improve accuracy and consistency.

Thompson/Center soon after followed Knight with the first in-line muzzleloader with a 209 shotgun primer for ignition. The hot, consistent ignition burned magnum powder charges faster, providing increased velocities. The T/C Encore rifle was modified to become the first 209-primer break-action muzzleloader. The new design made for easier cleaning. Later, T/C took things a step further with the Speed Breech quick-release breech plug, which you remove by turning 90 degrees, meaning there’s no need for a tool and no struggling with seized breech plugs. It was a handy and welcomed innovation.

Connecticut Valley Arms offers several break-action muzzleloaders, including the Apex, which has interchangeable barrels for muzzleloader and centerfire calibers. In 2009, CVA introduced its Electra, an electronic-ignition muzzleloader, in which the trigger is a switch that transfers an electric charge when depressed. The Electra uses an electric spark created by a 9-volt battery to ignite the powder, meaning there’s virtually no time between when the trigger is pulled and when the bullet exits the barrel. But it never really caught on. For whatever reasons, muzzleloader enthusiasts were reluctant to trade outcaps and primers for a battery.

Traditions was one of the first companies to improve the velocity, downrange energy, and effective range of a muzzleloader by going to a 30-inch barrel, which it did with its Vortek Ultralight LDR, which stands for Long-Distance ­Rifle. The extra barrel length allowed magnum powder charges to burn completely in the barrel, maximizing the energy and consistency of the propellant. The Traditions Vortek StrikerFire was the first hammerless muzzleloader. A simple, silent cocking button slides the striker button forward until it locks, readying the gun to fire.

In 2001, Savage Arms introduced the 10ML-II, the first muzzleloader to use smokeless powder. The use of smokeless powders in a muzzleloader was a radical step that was not without problems. Gun barrels blew up, and shooters suffered hearing damage and burns, leading to multiple lawsuits. Savage maintained that the problems were caused by user error and that the muzzleloader was free of defects and safe when used correctly. About 50,000 of the firearms were purchased, but in October 2010, ­Savage quit manufacturing the 10ML-II muzzleloader.

In 2013, LHR Sporting Arms was formed and introduced the Redemption muzzleloader. The rifle had the first breech with threads on the outside of the barrel and sealed blowback inside to eliminate seized breech threads and simplify cleanup. The concepts were sound but never garnered much attention.

The Remington Model 700 ­Ultimate Muzzleloader, introduced in 2015, is built on a Model 700 action and uses primed centerfire brass casings for an ignition source. This rifle is one of the longest-produced long-range muzzleloaders that is still available. The design and technology came from Ultimate Firearms of Michigan (also known for producing the Johnston Muzzleloader), which had been building long-range front stuffers for years. The company uses primed pistol brass for an ignition source, which is hot enough to burn 200 grains of powder, thereby increasing velocity and range.

CVA embraced the long-range shooting surge and introduced the Paramount in a .45-caliber bolt-­action gun that can handle radical propellant charges, producing velocities of 2200 fps. The Paramount uses a hotter large rifle primer to burn extreme powder charges for a muzzleloader. The Paramount Pro was a natural successor and comes with a threaded barrel to add a muzzle brake, which helps quell some of the recoil.

In 2018, SilencerCo developed the first integrally suppressed muzzleloader. The Maxim 50 is a .50-­caliber break-action muzzleloader with a suppressor permanently affixed to the barrel. The Maxim 50, a Traditions Vortek StrikerFire in-line with a SilencerCo suppressor, can in most cases be purchased without an ATF Form 4 or the tax and waiting period.

There have been radical changes to the muzzleloader world in the last two decades, and the march forward has no end in sight. The biggest challenge for hunters and shooters is finding a gun safe big enough to store all the options.