Heading whitetails in the right direction. 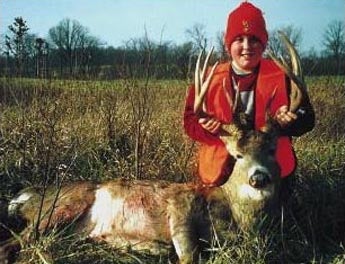 Still-hunting and stand-hunting are the most prevalent tactics among deer hunters, but there are times when they aren’t the most productive. When deer are heavily pressured and loath to move from thick cover, it’s hard to beat drive-hunting for putting meat on the table. Driving deer involves elements of still-hunting and stand-hunting and, when conducted correctly, offers safe and exciting sport. That assumes the hunters are organized and follow the game plan for their respective roles.

Simply described, a drive is a strategy in which some hunters are posted along the outskirts of a specified piece of land, and other hunters-and dogs, where it is legal-move through the section pushing deer ahead and to the sides. The standers do most of the shooting, but the drivers likely will get some shots too, presuming they are allowed to carry guns.

A successful drive doesn’t just happen. It takes a knowledgeable drivemaster, a good plan, and, most of all, a primary emphasis on safety for all involved. John Miller and Gerald Cedrone are drivemasters for hunting clubs based in New York’s Catskill Mountains, which means that they plan, organize and supervise every drive. Here are some of the techniques they follow.

Safety First
No hunt can be a success if someone gets hurt. Simple guidelines can minimize the possibilities of a mishap. “We haven’t had an accident since Highland Field and Stream Club was formed in 1924,” Cedrone says. To help keep drives safe, Cedrone’s club doesn’t allow drivers to carry firearms. In other organized drives, drivemasters might permit only the driver at each flank to carry a gun.

The club requires drivers to wear hunter-orange garments. Standers are encouraged to do the same, although neither the club nor New York state law mandates it.

“We tell each stander where the next stander will be,” adds Cedrone, “and he already knows where the stander on his other side is, because he saw him get dropped off.”

A driver should be able to see the drivers on each side of him. Ideally, says Miller, a driver should wait until the deer has backtracked past the line of drivers before he takes a shot. Miller prohibits his standers from shooting directly to their left or right; that is, in the direction of the nearest standers.

A hunter who doesn’t comply with the rules forfeits his place in the hunt. Standers police their own. Anyone who notices an unsafe act committed by another hunter is required to tell a member of the club’s hunt committee. The person who violated the safety rule is then asked to leave-presumably to meditate on his transgression.

It’s a penalty that’s seldom invoked. Miller believes that communication is the key to a productive drive. “Every person must know what is expected of him before, during and after the drive,” he says.

The drivemaster must explain the route of the drive, where each stander will be and what is expected of each, and let each person know when the drive will begin. Sometimes consecutive drives are planned, making such information all the more important. A topographical map of the area to be hunted helps each participant better understand how the drive will play out. Two-way radios, one in the hands of the drivemaster and the other in the hands of the captain of the drivers, maximize the coordination of the two teams of drivers and standers. [pagebreak] The Drivemaster’s Role
As might be expected, the drivemaster is an experienced hunter who knows the territory and how to position his hunters to take advantage of the day’s weather and wind direction.e’s aware of any changes to the property that might have taken place since the previous hunting season, such as terrain funnels that have been blocked or created, lanes and logging roads that have been constructed and woodlots that have been cleared. He must also know the boundaries of his hunting area and the location of any residences on the hunting property, as well as any just outside its borders.

A drivemaster is familiar with deer behavior and likely knows which way they will head, and why, when the shooting starts. Familiarity with the land has taught him where deer typically will be on opening day and where they will be later in the season. He knows of the deers’ morning preferences as well as their midday and early-evening haunts, which helps him plan the location of drives. The drivemaster determines who will stand and who will drive, and where they will take their positions. He’s the official timekeeper whose signal starts and stops each drive. Some drives are so grand in scale and involve so many hunters that the drivemaster might assign a lieutenant to handle various logistical concerns. The assistant is chosen based on his experience, dependability and people-handling skills.

What the Drivers Do
As few as two people can stage a drive but most drives are fairly complex and require a number of hunters. On opening day at Cedrone’s club, drives might involve as many as 30 participants. Normally, however, the number is somewhere between the two extremes. Cedrone and Miller agree that drives involving smaller areas and fewer hunters are easier to plan and control. Though the terrain governs every drive, usually the strategy calls for there to be more standers than drivers.

Drivers must not begin to move until the designated time or until they have been given a directive, assuring that all of the standers are in place. Drivers should walk abreast of one another for safety and they should keep in visual contact with the drivers on either side of them. Typically, drivers walk at a uniform pace that’s faster than the slow stop-and-go pattern of a still-hunter, but not hurried. Old-fashioned community drives of a bygone era featured drivers who yelled and banged on pans as they moved along. Barking dogs or hounds might have been part of the mix. Today, most drivemasters prefer slower, quieter drives. Miller believes that a deer not panicked might stay only 100 yards or so ahead of the drivers, occasionally stopping to check his back trail. That kind of behavior presents more and better shots for the standers.

Many deer that aren’t harried choose to lie low, then backtrack through the drivers. By making noise, drivers give away their positions, allowing deer to plan successful escape routes. By being quiet, drivers are more likely to find confused deer ambling into their sight picture. Depending on the drivemaster’s instructions, a driver might be responsible for picking up a stander or two as he reaches them. In those cases, the standers take on the role of additional drivers who move over the terrain.

Standing and Watching
Standers take their positions by skirting around the area to be driven so they won’t disturb the deer. Manpower and terrain will dictate the distance between standers, but generally they are about 100 yards apart in open woods, closer in heavier cover. The drivemaster designates stands that offer good visibility and cover the routes that deer normally use for daily travel.

“Standers have to remain still and quiet to have a chance at a shot,” Cedrone says. “When I have standers on either side of me who smoke or move around, it improves my chances while it reduces theirs. The deer are going to see them and slip away. Maybe they will come my way.”