One morning in the woods leads to a lifetime of lessons 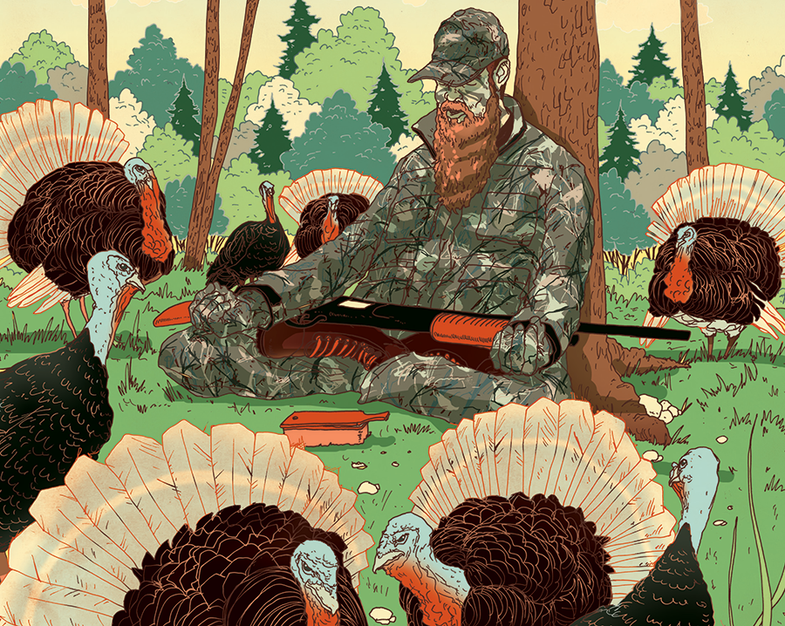 Sleep was out of the question.

It was the night before the first turkey hunt of the season, and I was 10 years old and restless. So instead of fighting it, I donned my surplus army camo and drifted downstairs to wait it out in the TV room. The choices on the tube were white static or a kung fu flick.

A whirlwind of ninjas surrounded Jet Li. He couldn’t possibly keep his eyes on all of his adversaries at once. So, in a brief lull between nunchuk blows, he blindfolded himself. Now his other senses came alive. He could hear—maybe even feel—danger. No enemy survived.

Dad jerked me out of my television trance when he asked if I had my shotgun and shells. Normally Dad took me hunting, but this morning he dropped me off at his friend Fred’s house. It was well before dawn, and I was instructed to listen keenly and do anything Fred said. He was a turkey master.

When Fred opened his door, it looked as though he’d slept in his camo and face paint. I wasn’t surprised. Turkey season lasts but a month—what master has time for laundry? His beard was ragged, his eyes were wedged tomatoes, his cap was hammered flat. He grabbed his Winchester pump and didn’t bother locking the door behind him.

After a stop for coffee and cigarettes, plus a sticky bun for me, we slid into the woods and found an oak tree. Fred pointed to the ground, and I sat. He landed beside me and unsheathed his legendary Moss Double Tone box call, setting it near his knee.

The sun began to rise. I still remember the colors, the sounds, the smells of that breezy April morning. An owl practically lifted my hat. Mosquitos buzzed and a woodpecker bent his beak on breakfast. As more animals chimed in, however, the medley became muddled to my untrained ears.
Then, a few minutes after daylight, I heard something altogether different. It was faint but bold. By gosh, it had to be a gobble!

I nudged Fred, and he looked back with a raised eyebrow.

“Think I hear one,” I whispered.

I waited, and at last heard it again: definitely a gobble. Fred picked up his call and struck five of the most delightful notes I’d ever heard. He rested the call. I readied myself.

An hour later, I was still ready, but growing stiff. Nothing had happened.

With the sun in the sky now, I could just make out a grassy field beyond the woods. Suddenly a bird fluttered into the opening.

Then Fred did the most amazing thing: He closed his eyes. I knew he was focusing all his concentration, trying to pinpoint even the slightest sound. He was listening—maybe even feeling—for a turkey.

An impossibly long time later—both for mortals and 10-year-olds—Fred opened his eyes and collected the box call.

“If there are no turkeys, go home,” he said.

So we did. Later, when Dad returned from work, I told him I’d learned much about patience and concentration. Ten years later, I found myself retelling the story over Thanksgiving, and describing how I’d used those virtues the following spring to bag my first gobbler.

Dad laughed. “You do know, son, that was right around the time Fred’s wife passed. He’d taken to the Wild Turkey pretty hard.”

And then it dawned on me: Fred the kung fu turkey master had been asleep.