A Farewell to Herman “Duff” Holbrook, the Father of Wild Turkey Rocket-Netting

If you hunt wild turkeys almost anywhere in North America, you owe a tip of your camo cap to Herman... 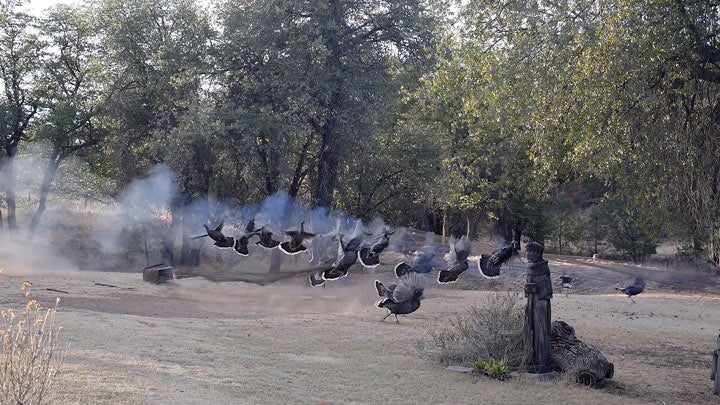 If you hunt wild turkeys almost anywhere in North America, you owe a tip of your camo cap to Herman Holbrook.

Holbrook, far better known as “Duff,” was a molasses-voiced Southern gentleman who as much as anyone can be credited with the remarkable—and in some ways, unlikely—return of the wild turkey to the hills and swamps of the continent.

In the brackish swamps of Carolina’s Lowcountry, Duff and his colleagues with the South Carlina Wildlife Department (now called the state’s Department of Natural Resources) invented and perfected net-trapping of turkeys. It soon became a common practice for capturing not only wild turkeys, but other wildlife species, but when Holbrook started doing it in 1951 as South Carolina’s first wild-turkey biologist, it was both controversial and experimental.

Up until that time, the standard practice for expanding the quickly diminishing range of wild turkeys was to release pen-raised birds in suitable habitat. But the hatchery birds were notorious for either dying within days of their release into the wild, or returning to habitations to receive handouts of grain and other groceries. I wrote about the origins of this practice in Missouri earlier this year.

Holbrook, whose schooling was interrupted by World War II (where he flew 14 combat missions as a B-24 navigator) and his colleagues realized that survival of the species depended on the evasive traits exhibited by the handful of truly wild turkeys they discovered in remote pockets of the Santee swamps. If they could only capture those wild birds, then release them in vacant habitat, turkey populations might be increased and their range expanded.

But capturing those wild birds was no cinch. They flushed at any sign of humans and lived in the nastiest tangles of the swamps. These “original” birds had survived precisely because of their wildness.

So Holbrook borrowed from an idea that was just getting traction at the time: using mortars to carry a weighted net over concentrations of birds. (It should be noted that the origin story of rocket-netting is full of intrigue and unknowns. Was it a technology perfected by wartime engineers? Was it invented in England? Or is it a home-grown technique?)

Holbrook and his team identified clearings where they could bait birds into a site where the biologists waited in hiding, ready to fire their rockets when enough birds gathered on the bait. After the net was lobbed over the flock, the technicians rushed out, pinned the birds under the net, plopped them in boxes just large enough to contain an adult turkey but not so large the birds would flop around and injure themselves, and then drove them to new habitat, where they were released.

This scenario was repeated thousands of times around the Southeast, then the Midwest, and later everywhere turkeys now roam. As a volunteer with the National Wild Turkey Federation, I participated in dozens of rocket-netting operations in Montana. Only actually hunting turkeys compares with the heart-thumping adrenaline-fueled expectation of waiting, a rocket igniter in your hand, for the command to fire at a flock of oblivious turkeys.

Now that wild turkeys live in almost all suitable habitat, from Ontario to California and British Columbia to Florida, the need for rocket-netting has subsided. And Duff himself has passed on. He died earlier this month at the age of 92.