What To Do When Spring Turkey Gobbling Comes to a Halt

Why Can't You Hear Turkey Gobbling in the Spring? That Depends 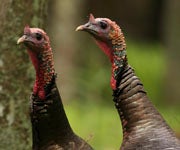 It’s a common occurrence every season for many hunters. Woods that should burst with turkey gobbling during the spring season are silent on the opener. When the silence reigns for several days, it’s almost impossible not to become discouraged, leaving a hunter questioning if birds are even around. An entire seasonal silence can make you want to walk away from a lease. If you own the land, you might be tempted to sell. But is all lost for the hunter who runs and guns, calling into every hollow and across every field only to hear nothing? The answer to that depends.

While no wildlife biologist has yet to definitively pinpoint a reason why turkeys gobble one day and shut up the next (or for several days), there are a number of observations that have been made over the years that can help a hunter better decide whether to stick with the game plan or pick up his decoy and go elsewhere. The first thing to do is develop a solid understanding of your land and whether it generally holds turkeys. And that can only be done by properly scouting the property, beginning with autumn deer or small-game seasons.

Robert Abernethy, assistant vice president of agency programs with the National Wild Turkey Federation, notes that if you see turkeys during deer season, then they should still be in the general area come spring. Of course, depending on the size of the property, it doesn’t exactly mean they’ll be on a particular piece of land.

“In the East, turkeys generally don’t range too far,” he says. “Turkey range in the East is typically only a square mile.” If you hunt out West, however, all bets are off. There, he explains, birds can range as far as 50 miles, potentially taking them well out of a county.

If birds were seen throughout deer season, scratching among hardwoods for acorns on a property with little other habitat, there’s a good bet birds may move on come spring, when hens begin looking for suitable nesting habitat. They will also want to nest close to food. That means planted cropfields with grassy edges, soybean and cornfields where the plants are just starting to grow, and even grassy, young clear-cuts near a recent burn should all keep birds close. These are the areas you should focus on hunting in the spring.

Check It Out
Even if you’re confident that your land holds birds, get out there at least a couple of weeks prior to the season and check things out. Listen and watch from the edge of the property to avoid disturbing the local turkeys’ typical habits. Unless you’re in a mountainous area, you should be able to hear birds gobble as far out as a half mile in the East, a mile and a half out West. If you don’t hear anything, walk field edges and muddy roads later in the day searching for feathers, tracks, and droppings to confirm a flock’s presence. Check open pines and hardwoods for evidence of recently scratched-up leaves, indicating where birds have been seeking out insects, seeds, and acorns. Find scratchings where the soil is still damp and dark, or tracks and droppings are clearly fresher than the most recent rain, and even if you don’t hear gobbling, you’ll know turkeys are there.

“A lot of things can keep a bird from gobbling,” says Abernethy. “Excessive disturbance, such as ATVs or people coming and going all of a sudden where none were before, will certainly do it.” Other reasons why a tom might not gobble include coyotes; a dominant bird in the area, keeping others silent; and even cloudy, cool, and rainy days can keep longbeards from gobbling.

As the season wears on and breeding winds down, turkeys also tend to gobble less. If the area suffered a poor hatch two years ago, or has suffered consecutive years of bad hatches, the population of gobbling birds might also be limited. Excessive hunting pressure will also run birds out of an area, so be sure you and your fellow hunters go low impact every time you enter the woods. That means no trucks, no ATVs, and no busting out through the open where turkeys can see you. Create off days when nobody can hunt the place, giving the birds a break from the action.

The bottom line, however, is if you found evidence that birds were in the area just weeks or days before opening day, then even if some of them moved across the fence in their daily routine, they should still be within earshot throughout the season. And that means you can still hunt them.

Stick With It
Few things are more discouraging than hunting turkeys when you’re not hearing gobbles, but such hunts can still produce for the patient hunter willing to take a deer hunter’s approach to longbeards. Slow down the run-and-gun pace, set up a decoy in an open area where the fake bird can act as a visible beacon, and offer up occasional calls. Sit tight to an area for an hour or two and give a turkey time to work your way. It’s not the most exciting way to hunt wild turkeys, but it can produce.

If the action remains slow, continue to scout and seek out fresh sign, setting up in areas where you find recent activity. If you’ve hunted several days without hearing a peep or catching a glimpse of a turkey, check out your forecast and be there the next time a thunderstorm is predicted to roll through. Silent birds can’t resist gobbling when thunder rumbles and will give themselves up almost every time. If it storms loudly and nothing gobbles, then you know the area has likely been played out. It might be time to go somewhere else—or trade in your turkey call for a fishing rod.