At Least Six Government Agencies Are Trying to Track Down the Wild Turkey That’s Attacking People in D.C.

It might be time for a turkey season in Washington D.C. 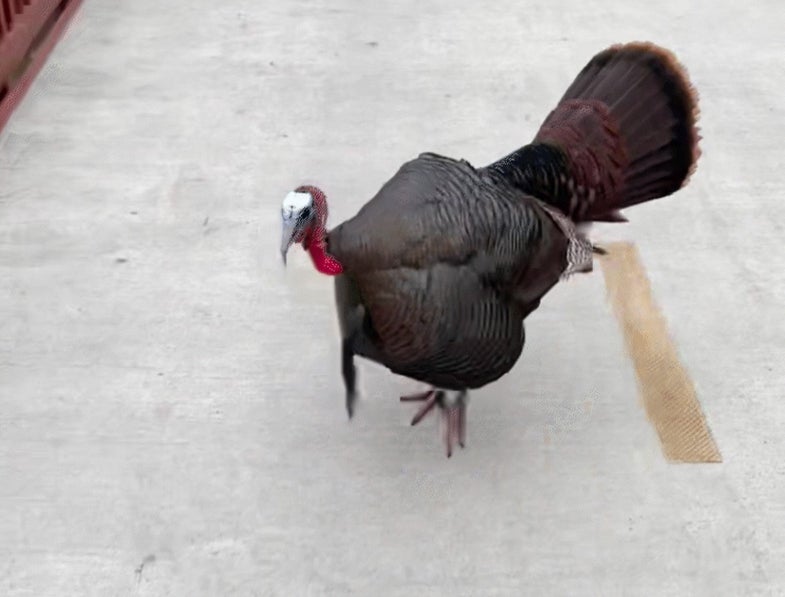 The turkey has managed to attract the attention of several government agencies. He is still at large. Joe Cashman / NPS
SHARE

At a time of the year when most hunters would love to be charged by a longbeard, people in D.C. are running from one. Anacostia Riverwalk Trail is usually a pleasant place to go for a walk or a jog. But now that a wild turkey has taken over the wooded patch between Kenilworth Mash and the Anacostia River, trail patrons are starting to steer clear of his domain.

“I was attacked there,” Mr. Robinson, 70, a retired court-services employee told The Wall Street Journal. “Three weeks ago. I was trying to get away from him and he came after me. He wouldn’t let me pass.”

“There is an element of humor to it,” said Dan Rauch, a wildlife biologist who is part of the team that’s trying to catch the perpetrator. “There is a terror turkey stalking a river trail. If I hadn’t seen the videos myself, I would have thought it was an urban myth.”

The big turkey was first seen at the Kenilworth Aquatic Gardens, which is managed by the National Park Service. Park guide Joe Cashman said the turkey chased him and another park guide when they were on bike patrol.

The bully turkey amassed enough complaints that the NPS to put up signs in January warning people of its presence. Hunters have offered to take care of the situation, but NPS doesn’t want to kill the tom. Instead, park guides encourage people to avoid the bird until they can capture and relocate it, but that’s proving to be difficult.

Of course, with this being Washington, there couldn’t be just one government agency involved in taking down such a dangerous suspect. The District of Columbia’s Department of Energy and the Environment, which is a division of the Fish and Wildlife, got involved. The agency recruited the Humane Rescue Alliance, the nonprofit acting as D.C.’s animal-control unit. Then the bird was spotted crossing into Bladensburg, Maryland, so the Price George’s County Parks and Recreation Department and the Maryland Department of Natural Resources got involved.

Read Next: California Mailman Allegedly Beats a Wild Turkey to Death, Claims It Was in Self-Defense

When officials cornered the bird under a bridge it flew across the Anacostia River to the U.S. National Arboretum, bringing the U.S. Department of Agriculture into the fold. Sue Greely, a USDA wildlife manager, said the turkey roosted at the 446-acre federal park last year and was following workers around the arboretum. Near Thanksgiving, one of the workers told the bird he was going to have it for dinner.

“We haven’t seen him since November,” Greely said.

Since then, the bird has been living in the Kenilworth Gardens where the public has been reporting attacks. The multi-agency task force is still in pursuit. To reduce taxpayer expense, we recommend staking a couple decoys and breaking out a pot call.