Gobbler Guns and Skills: Fine-Tune Your Turkey Gear this Spring

What defines a turkey gun? Well, by one school of thought, any shotgun that will kill a turkey is a turkey gun. That might even include a .410 revolver under some conditions. But there are some characteristics that make for a more effective turkey-hunting shotgun. 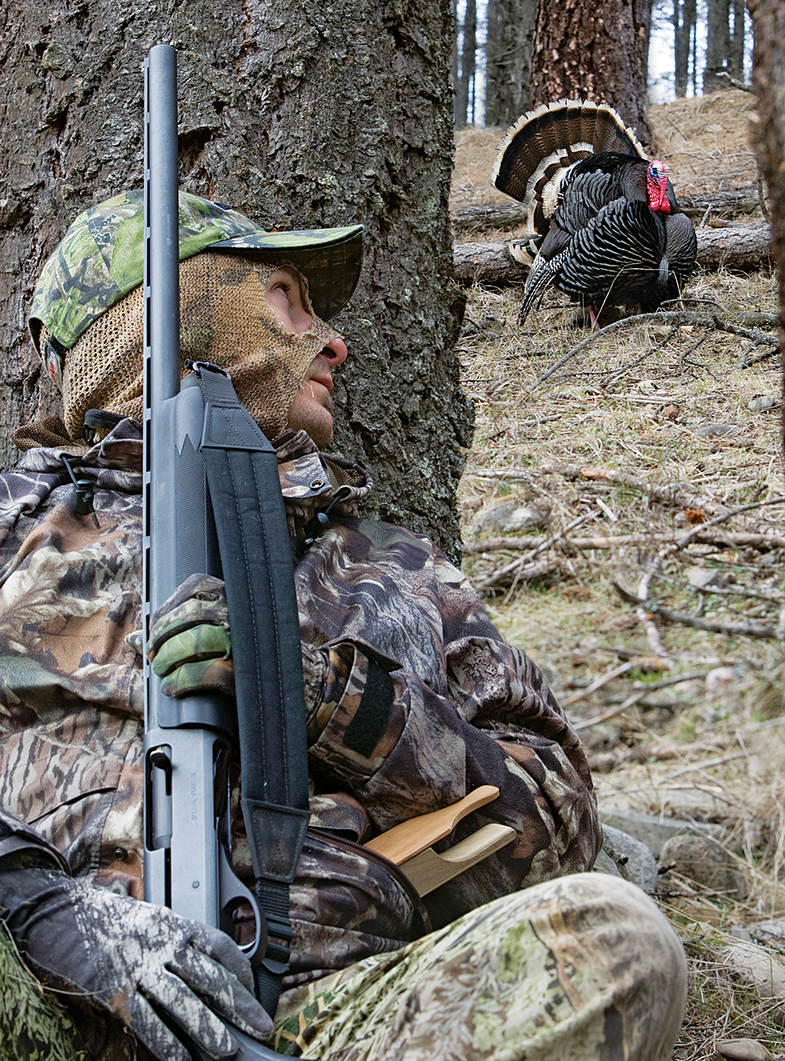 What defines a turkey gun? Well, by one school of thought, any shotgun that will kill a turkey is a turkey gun. That might even include a .410 revolver under some conditions. But there are some characteristics that make for a more effective turkey-hunting shotgun.

The vast majority of turkey guns are 12-gauges. Sure, other bore sizes will work, but the 12-gauge is king. It’s where you have the most options for ammo, and it’s proven to be the most effective. Even the mighty 10-gauge is outperformed by a modern 3 ½-inch 12-gauge load. They have the same payload, but the 12-gauge runs at a higher pressure and so has more velocity and energy. But the most common choice for turkey hunting, and one that’s extremely effective, is the 3-inch magnum 12-gauge.

Although there is some trending in the other direction, most serious turkey hunters still want the tightest pattern they can find. Matching the optimum choke constriction to your gun and load will provide that. In a standard barrel, I have had good luck with .670 chokes for No. 4 shot and .665s for No. 6 shot. Those are a good place to start. 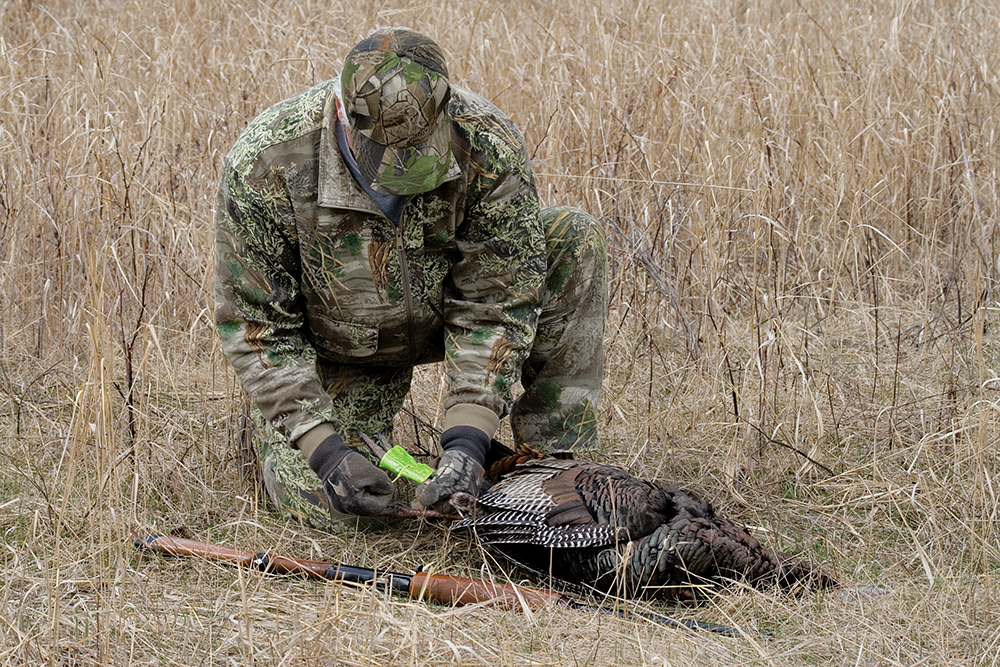 Time at the patterning board will help you determine your ­maximum effective range for turkeys.

A turkey gun will usually have a shorter barrel than a wingshooting shotgun. While the downside of a short barrel is a little lost velocity, that stubby length is a big help when you need to move and shift positions in a blind or in the brush.

Turkey guns, in my not-so-humble opinion, must have sights. You wouldn’t hunt deer with a bead on your rifle, would you? When the bird is close, you are shooting a pattern so small that it is effectively a bullet. Hope is not a turkey-­hunting strategy, but with a bead all you are doing is hoping you hit the bird. Sights give you greater control over the situation.

Many hunters, including myself, prefer a pistol grip on a turkey gun because it keeps your hand and wrist in a more natural and comfortable position while you’re waiting for a turkey to work in to the calls than a traditional shotgun stock does. If you are using an optical sight, the comb on the stock should be higher to position your eye correctly behind the sight. It should also be straight or slope down in front to direct the recoil away from your face. A recoil pad is a must. Turkey loads kick as much as some elephant guns, so pamper your shoulder a little. That doesn’t make you a wimp.

Finally, camo is important. You have heard the term “eyes like an eagle”? Well, eagles are blind compared to turkeys. You’ve got to hide that gun.

There are lots of fine shotguns out there, but here are three that caught my keenly honed turkey-hunting eye

This shotgun represents one of the best values around for a turkey hunter. It features a synthetic stock and forend camouflaged in Mossy Oak Break-Up pattern, while the metal is Remington’s Express matte-finish blued. This contrast looks good.

The gun is chambered for 3-inch shotshells and comes with a Turkey Extra Full Rem. Choke in a 21-inch vent-rib barrel with a HiViz front bead.

The bottom-eject Browning Pump Shotgun comes in 3- or 3 ½-inch chamberings. It has a forged and machined steel receiver that is drilled and tapped for a scope mount. The gun is fitted with HiViz 4-in-1 fiber-optic sights. There is a top-tang safety that puts the safety right under the shooter’s thumb, where it belongs. The stock has Dura-Touch Armor coating in Mossy Oak Break-Up Country camo. The shotgun comes with three Invector-Plus choke tubes. ($950 for 3-inch; $1,029 for 3 ½ inch; Browning.com)

While this semi-auto is pricey at nearly three grand, it comes with a lot of options that you would have to add to other guns. And it has the legendary Benelli reliability and performance, and is so durable that your grandchildren will pass it on to their kids.

The SteadyGrip pistol grip is very comfortable and provides control over the shotgun, but a conventional-style buttstock is also included, if that’s your preference. This 24-inch-barrel shotgun comes with a Rob Roberts extra-full turkey choke tube and a lengthened forcing cone. A Burris FastFire II red-dot sight comes mounted and zeroed. ($2,950; BenelliUSA.com)

Other than panic-induced stupidity, there are two big reasons why we miss turkeys. The first is because we shoot too far. That’s not technically a miss—it’s just that we didn’t get enough pellets in the kill zone. The other, and most common, way to miss a turkey is on those ultra-close shots, where the pattern is very tight.

The key to hitting a turkey every time is to use sights. I prefer the simplicity of a scope. As a longtime rifle shooter, it’s the sighting system I know best. Red-dot sights are another excellent choice. Iron sights or fiber-optic sights are less expensive and much lighter, but they require a bit more thinking (something that can be difficult when a gobbler is close) because you must line up the back sight, the front sight, and the turkey. With optics, you just put the crosshairs or the red-dot on the turkey and push go.

No matter which you choose, you must zero the sight. Start close—say, 15 yards—so the pattern is very tight. Once zeroed, move out in 15-yard increments to your max range to verify that the pattern is centered on the target. 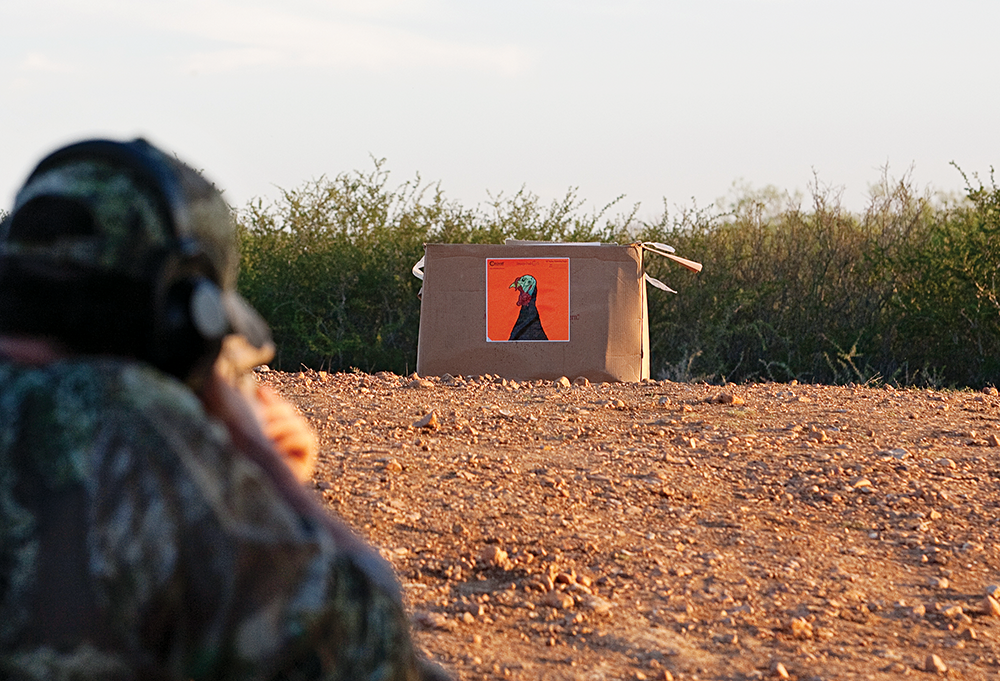 Hunting turkeys is unlike anything else we do with a shotgun and birdshot. The goal here is to place as many pellets as possible on the turkey’s head, which is about the size of a man’s fist, rather than throw a wide pattern to hit a flying bird. It’s important to know the maximum range you can ethically shoot.

I define maximum range as the farthest distance at which patterns have no less than five pellets in the spine or brain of a life-size turkey target. You must be able to repeat this at least three times.

Find this distance by shooting once at a turkey target. Start at 40 yards and keep moving the target farther out in 5-yard increments until this parameter is breached. Move back to the last distance at which you had five hits and try again. If you can shoot three patterns in a row with five hits, that is your maximum effective range. If not, move the target 5 yards closer.

You must also be certain that your load is maintaining at least 2.6 foot-pounds of energy per pellet at that range, as studies have shown that’s the minimum energy needed to ensure penetration through bone. Of course, that varies with pellet material, pellet size, and muzzle velocity, but a 2-ounce 3-inch load with No. 4 lead shot may drop below that threshold beyond 60 yards.