Even without an optic or expensive custom choke, the old 870 out shoots most other turkey guns 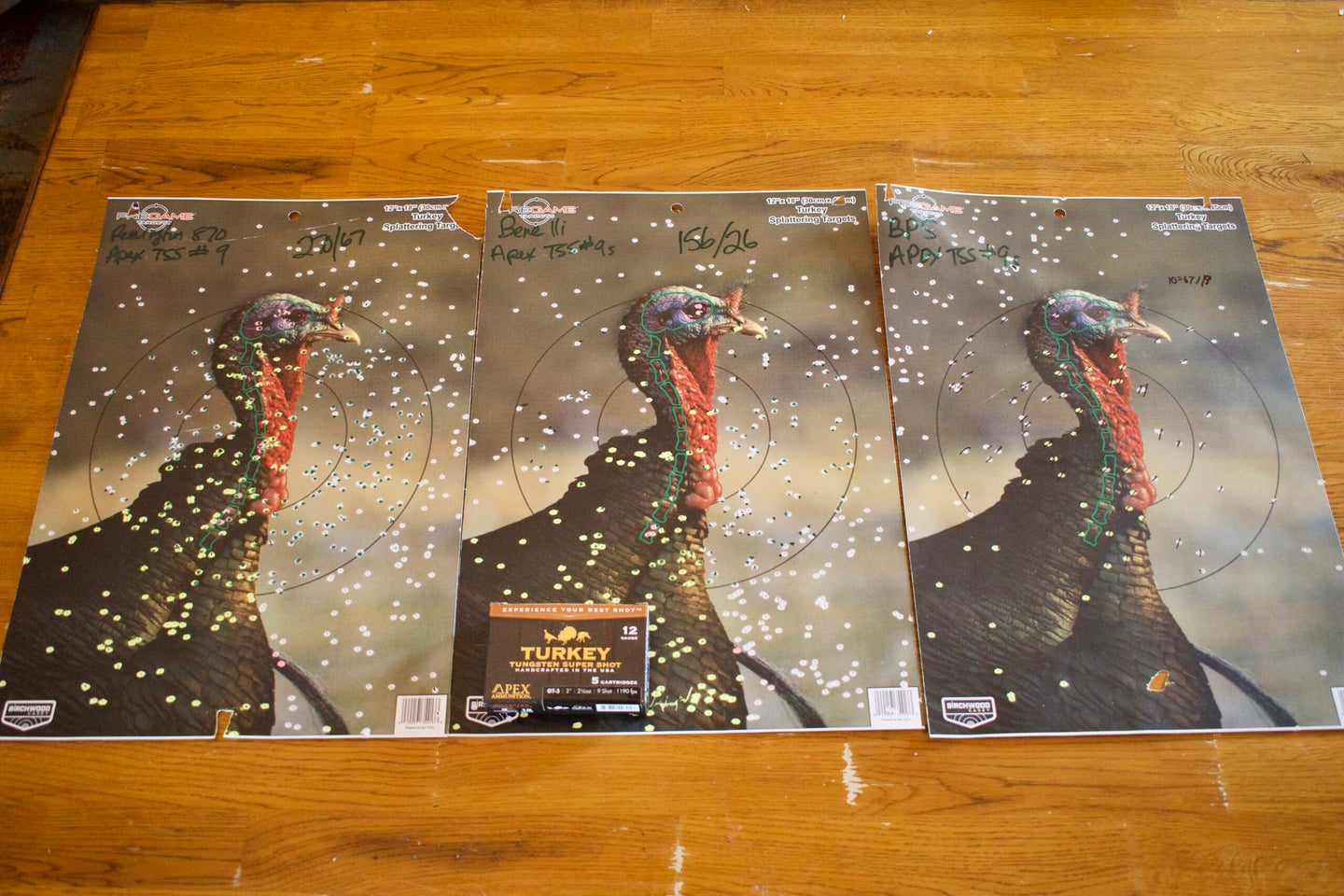 Four men—L. Ray Crittendon, Phillip Haskell, Ellis Hailston, and G.E. Pinckney—designed the Remington 870. I have to believe at least one of them was a passionate hunter, or at least wanted to be (turkey populations were struggling when the 870 debuted in 1950). This is because Remington’s classic pump-action shotgun can turn just about any modern turkey load into a gobbler-killing hammer—which is something I discovered after testing nine of the best turkey hunting loads of 2022.

Over the last decade, I’ve patterned scores of different lead, steel, bismuth, and TSS ammo through a long list of shotguns. In all that time and after shooting innumerable patterns, I can’t recall a gun ever performing better with turkey ammo than the 870. During the test, an 870 coupled with an inexpensive Primos Tight Wad choke, left Benelli’s $3,000 Super Black Eagle Performance Shop Turkey (Rob Roberts .655 Final Strut choke) in the dust. The gap was even wider against the iconic Browning BPS with a factory full choke. Yes, both the Benelli and Browning produced deadly patterns, but their patterns were not as tight or as consistent as those printed by our 870 Express with a 26-inch barrel. But this probably won’t surprise veteran turkey hunters. For decades, the 870 has been a go-to gun for diehard turkey hunters.

“In 1984 Remington came out with the 870 Special Field,” says Ron Jolly, co-chairman of Turkeys for Tomorrow and a member of the NWTF Grand National Hall of Fame, who has been shooting an 870 for almost 40 years. “I saw an advertisement in Outdoor Life, called my gun dealer, and bought it sight unseen. I fell in love with it immediately. I couldn’t tell you how many turkeys it has killed…a lot.”

The 870 Delivers a Superior Pattern

Scopes and reflex sights have become popular amongst turkey hunters. A gobbler’s head is a small target, and if you can put a red dot on its wattles and pull the trigger, that makes hitting a spring tom much simpler. But when it comes to actually killing a longbeard, pattern density and consistency are key. You want to see an even spread of pellets smattering a 10-inch circle, so there’s less possibility of wounding the bird with the edge of your pattern.

In the chart below you can see the pellet counts inside a 10-inch circle from the nine loads we tested. We fired each load through each gun from 40 yards while shooting off a lead sled. We shot at least three patterns with each load/gun combination, and then we took the best pattern for score. The loads marked with x- are TSS. Also, note that the 870 is a 3-inch gun so it could not shoot Remington Magnum loads.

Going into the pattern test, I presumed the Benelli would be the best shooter (it comes with a Burris FastFire II red dot sight and costs nearly 10 times what an 870 does). But that wasn’t the case. Shooting Apex TSS 2¼-ounce No. 9s at 40 yards, the 870 put 270 pellets inside the 10-inch circle compared to Benelli’s 156 and Browning’s 67. The 870 went on to perform better than the other two shotguns at 40 yards with all nine loads in the test, except Browning TSS (the BPS nipped the 870 by 15 pellets).

In some cases, the disparity in pellets on target from the 870 compared to the other two guns totaled over 100 hits. One of the most impressive takeaways from the test was the 870’s pattern work with Winchester’s Longbeard XR (a popular lead load). It placed 125 lead No. 5s inside the 10-inch circle, 16 pellets better that Federal Heavyweight TSS, which uses much smaller 7 and 9 shot. Benelli’s best with XR was 59 pellets, not even half of what the 870 produced. The BPS delivered only 26.

Jolly had a much less scientific process in discovering the superior accuracy of his 870. But, he discovered it nonetheless.

Read Next: How to Pattern a Turkey Hunting Gun

A second component of the shotshell test was to stretch the loads out to 70 and 90 yards in order to experiment with how effective TSS turkey loads are at long range. The 870 continued to outperform the other guns. At 70 yards, I could only get a few pellets on the entire 18- by 12-inch target with any of the loads from the SBE3. The 870 patterns proved it could kill a turkey at 70 with every TSS shotshell and Winchester Longbeard.

The 870’s performance during our test isn’t enough evidence alone to anoint it as the best turkey hunting shotgun. There are an infinite number of repeaters and break-action shotguns I would need to pattern to prove that. Plus, there’s more than just tight patterns when it comes to a great turkey gun. Still our results are a reminder that the classic pump remains relevant (and accurate). An 870 does not have the extras a modern dedicated turkey shotgun has, but I’ll wager a pallet of TSS that it pattern just as well—or better.

The Remington 870 Has Turkey Hunting Heritage

Jolly has been hunting turkeys with an 870 for four decades. His father loved the Winchester Model 12 with its long 30-inch barrel and fixed full choke. But Jolly deviated from his dad’s taste with the purchase of a short-barreled (21 inches) 870 Special Field with a fixed full choke. The magazine of that 870 model is so short that no plug is required; it simply holds two rounds so you’re legal to hunt. It also had a straight English stock, not ideal for a turkey hunter (the Special Field was actually billed as an upland shotgun for the woods).

“If you don’t have your head in a perfect position on the stock, your thumb will get up against your cheek bone and [the gun] will rear up when you shot, and boom, you’ll have a black eye,” Jolly said.

After one too many shiners, Jolly swapped the English stock with a pistol grip stock from another 870. He killed countless turkeys with it from 1984 to 2021, and recently gifted the gun, known as Ol’ Bess, to long-time friend Jim Ronquest. Jolly still has a Special Field though. He bought a second one for his father a year after buying Ol’ Bess.

“My sister called me when [dad] was dying, and so I went to see him,” Jolly says. “It was turkey season, so he told me to bring my stuff, but of course I didn’t, because I wasn’t going down there to hunt. But in the corner of his room was the 870 with his old Mossy Oak clothes hanging on the barrel. So was his turkey vest. I reached into one of the pockets and found one little black Winchester shell. After he died, I shot a turkey with it from that gun. That was the most special turkey I’ve ever killed.”