The 10-Gauge vs. 12-Gauge Shootout: The 10 Is Still a Long-Range Hammer on Turkeys and Geese

If you need to kill big honkers and spring toms at distance, the 10-gauge shotgun still gets the job done 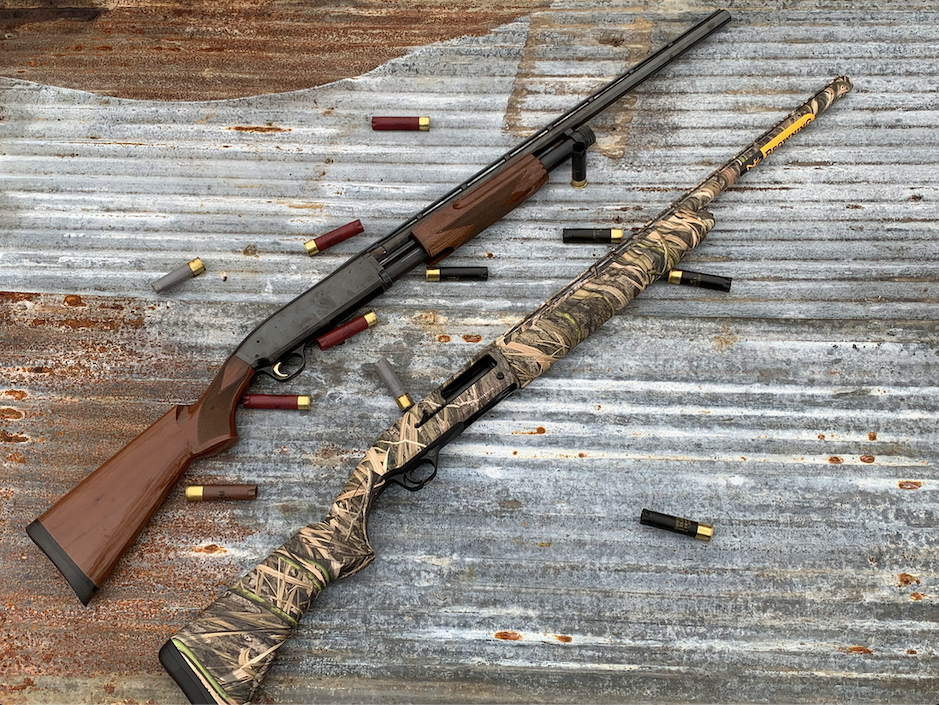 I grew up hunting in the goose pits of Fulton County, Illinois, a place once noted for its huge Canada geese. Those days are long gone, but there are still a few groups of massive local honkers with white asses the size of five-gallon buckets cruising the skies here. And old timers in sunken field blinds wait to ambush them every January with trusty Ithaca Mag-10s or Remington SP-10s by their sides. These days, there are few dedicated 10-gauge enthusiasts that remain.

Still, there are enough folks shooting 10s for Browning to continue to produce the Gold Light and BPS pump in that gauge (Harrington & Richardson also makes a single-shot Pardner in 10-gauge). But this niche shotgun club has become smaller as the years have ticked by. The reason for that is the advancement of non-toxic shot. Bismuth and tungsten are making smaller-gauge guns more lethal on waterfowl. Turkey hunters have really embraced sub-gauge shotgun culture—the 20-gauge and .410 are becoming popular because of the performance of TSS loads. The advent of the 3½-inch 12-gauge shotshell in the late 1980s also dropped the hammer on the 10-gauge for a time. It essentially made shooting a 12 and 10 one in the same. And since 12-gauge ammo was (and remains) cheaper than 10-gauge shotshells, it was a no-brainer for most hunters to make the switch.

The 3½-inch 12-gauge load made the 10-gauge shotgun obsolete, but the big gun made a comeback in the 1990s when steel shot was required to hunt waterfowl. The first 12-gauge steel loads were not very effective at killing birds cleanly, so many core hunters went back to the 10 because it patterned larger shot so well. There were also a small number of shooters who hand-loaded 10-gauge shells, ramping up the velocity with larger shot to make the loads more potent.

“That early steel was terrible, and so we picked up the 10s again,” said Randy Hill, who guided in southern Illinois, a once iconic location to hunt Canada geese. “It wasn’t until they started speeding steel up that we went back to the 12-gauge. I still think the 10 is a great gauge for big geese, especially late season when you have to take longer shots on hardy birds that have a thick layer of down feathers and fat.”

Even though there is not much (if any) advantage in terms of pellets on target if you shoot a 10 versus a 12, the 10 does deliver a shorter shot string because of its larger bore diameter (a 10 has a .775-bore whereas 12s have around .729), which makes it capable of shooting larger size shot than a 12. It also makes it more deadly at distance because the wider bore allows 10-gauge pellets to arrive at the target all at once. My friend and fellow gun writer Phil Bourjally had the folks at Federal Premium put this theory to the test a few years ago at their indoor shooting tunnel. The results showed that the 12 strung the shot out more than the 10. That makes a big difference when you’re shooting a goose or tom at 50-plus yards. When I shot both gauges at the range I could see a definitive difference in the impact by the amount my pattern board shook back-and-forth when shooting the 10 versus the 12. At least anecdotally, that violent wobbling caused by the 10-gauge loads meant more pellets were striking the target at the same time.

One of the bad raps the 10-gauge gets is it has unbearable recoil. That’s not true, particularly in the gas-operated auto-loaders, which have more tolerable recoil than most 12-gauge pumps or inertia-driven semi-autos. The 10-gauge is also a heavier gun so it soaks up more recoil than a 12 does. Fully loaded, a Browning Gold can weigh 12 pounds. You might not want to lug that through pheasant fields, but in a goose blind there’s no issue…and I promise you won’t have to ice down your shoulder after the hunt.

I shot the Browning Gold Light 10 at the range and it was far easier on my shoulder than my dad’s old Browning BPS that I used as the 12-gauge test gun. And honestly, if you’re a big guy (like I am), carrying a 10 is not awful. No, I would not want to run and gun turkeys with a 10-pound gun, but if I’m sitting in the same spot all day, I’ll take the long-range effectiveness of a 10-gauge.

“I used to shoot a 10 in my goose guiding days, and it was a great gauge for shooting sailing birds and cripples the clients couldn’t put down,” said John Taylor, a longtime shotgun writer. “The recoil on a 10 is nowhere near as bad as a 12-gauge 3½-inch load. I don’t know why anyone would choose to shoot those from a pump shotgun. Talk about rattling your bones…”

At the Patterning Board

Going into the gun test, I thought the 10 would outperform the 12 by leaps and bounds at longer distances. But in terms of pellets on target, that wasn’t the case. As I said before, the 10 definitely delivers more pellets at once, making it more lethal at long-range, but in this case it didn’t beat the 12 in terms of pellet density on the target. In fact, Federal’s Speed Shok in 12-gauge had the best pattern percentage (and number of pellets on paper) at the longest yardage than any other load in the test.

Also, the more I pattern guns at longer distances, the more I find how important it is to put your gun on paper at 40-plus yards. Most shotguns pattern well out to 35 yards, but once you get to that 40-yard mark everything changes (typically) if you’re shooting steel. Performance falls off and the pellet impacts can become inconsistent. Both of these guns shot high for me (about 90 percent of the pattern on every shot was above the centerline) once I got out to 40 yards. And as I moved further from the target (50 and 60 yards), a majority of the patterns from both guns hit in the upper right-hand quarter of the 30-inch circle. So shooting geese, I would have had to hold the barrel below a crossing bird or on the bird’s butt if it was a straight up shot to kill it. For a long poke at a tom, I would need to hold low left of its head to make sure the full pattern connected.