Silent Spring: The Changing Landscape of Turkey Populations and Strategies to Hunt Them

Wild turkey numbers are on the slide in some areas of the country, but savvy hunters are quickly learning to cope with the new normal. 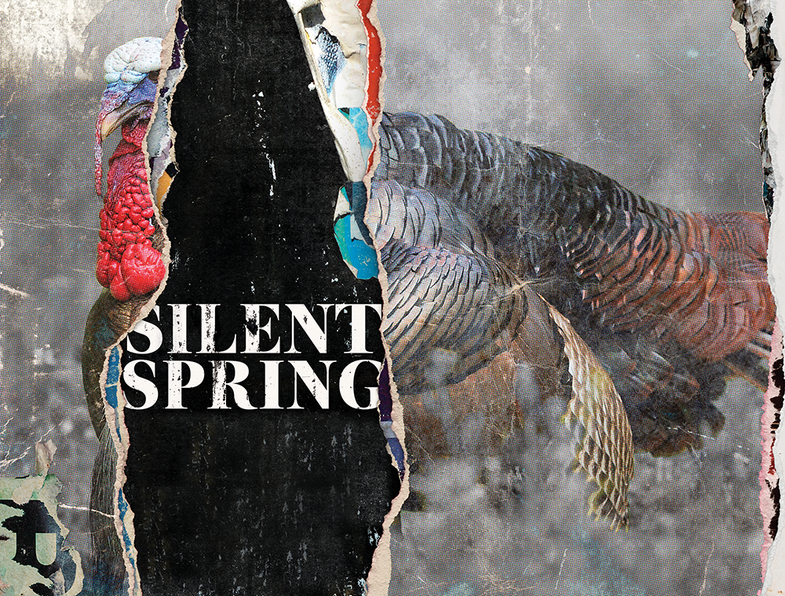 It was a gobbling morning—40 degrees, no wind, clear skies. As a hopeful male woodcock peented his location to any and all hens within earshot, I waited for the raucous preseason gobbling that was sure to follow. Only it didn’t. The once so aptly nicknamed Killing Fields were dead. Back at camp, I stared wistfully at a topo map of the property and the Xs that just a few years ago marked the location of the eight birds we heard gobbling there in a single evening. It was the last time the place was any good. What’s changed is anyone’s guess.

Outdoorsmen recount the history of the restoration of the wild turkey with zeal, and for good reason. It is an iconic wildlife conservation success story. Due largely to the efforts of the sportsmen-funded National Wild Turkey Federation (NWTF), wild turkeys have gone from endangered in the early to mid-1900s to a record high of 6.7 million birds just a few years ago.

But today there are signs of trouble in the turkey woods. National population estimates are between 6 million and 6.2 million birds, according to the NWTF. Wildlife managers and biologists in the South and the Northeast are especially concerned. In Alabama, the Auburn University of Forestry and Wildlife has joined forces with the Department of Conservation and Natural Resources to study the decline. In New York State, the Department of Environmental Conservation is in the fourth year of a research project designed to get a handle on the state’s 15-year turkey population decrease. The Tennessee Wildlife Resources Agency is similarly seeking answers to the turkey-harvest drop in various counties.

It’s too early to ascertain whether the situation is temporary or enduring. It is not known whether it’s being caused simply by poor nesting conditions during a particular spring, predation, disease, or habitat loss. What is clear is that with fewer birds in the woods in some regions, spring gobbler hunting strategies have had to evolve.

CHANGE IS GOOD
“Certainly, a lot has changed—including my approach to the spring season,” says eastern New York State guide and co-owner of World Slam Adventures Tony Caggiano. “We still have birds, but there are far fewer in the traditional roosts, and there don’t seem to be any secondary roosts anymore—so no backup birds. In places where we used to hear a dozen or more in a morning, we might hear one.”

“I hunt a lot of different places, and the lack of birds seems to be in pockets,” says Farr, who has completed Grand and Royal turkey slams with a gun. “But they’ve been down for the past few years now. Where I’d hear 10 or 12, there are now maybe one or two. And you can’t kill what’s not there.”

For Caggiano, whose spring guiding success has gone from a high of 26 in 2003 to a low of 16 last year, preparation for the gobbling season now begins in the dead of winter.

“We got slammed hard during the winter of 2015,” he says. “Our area had a few feet of snow on the ground for most of it, and it was ridiculously cold. We have food plots, but there was too much snow for the birds to get to the feed. So I put a snowblower on the tractor and tried to keep the snow off the plots for three months. The birds utilized them, and that’s what saw them through what was historically bad weather. I do that in most bad winters these days.”

Where legal, some hunters have turned to winter feeding. Though controversial and often discouraged, supplemental feeding can serve the dual purpose of keeping birds alive in deep snow and prolonged cold, and helping concentrate gobblers prior to spring breakup in regions where populations are declining.

In states such as Massachusetts, where supplemental feeding is permitted up until 10 days before the opening of the spring season—and where winters can be especially harsh—it’s common for hunters to provide turkeys with feed until legally required to stop. When birds break from their winter flocks and toms begin to set up their gobbling territories, they will likely do so within a 1- or 2-mile radius of where they spent the winter months. 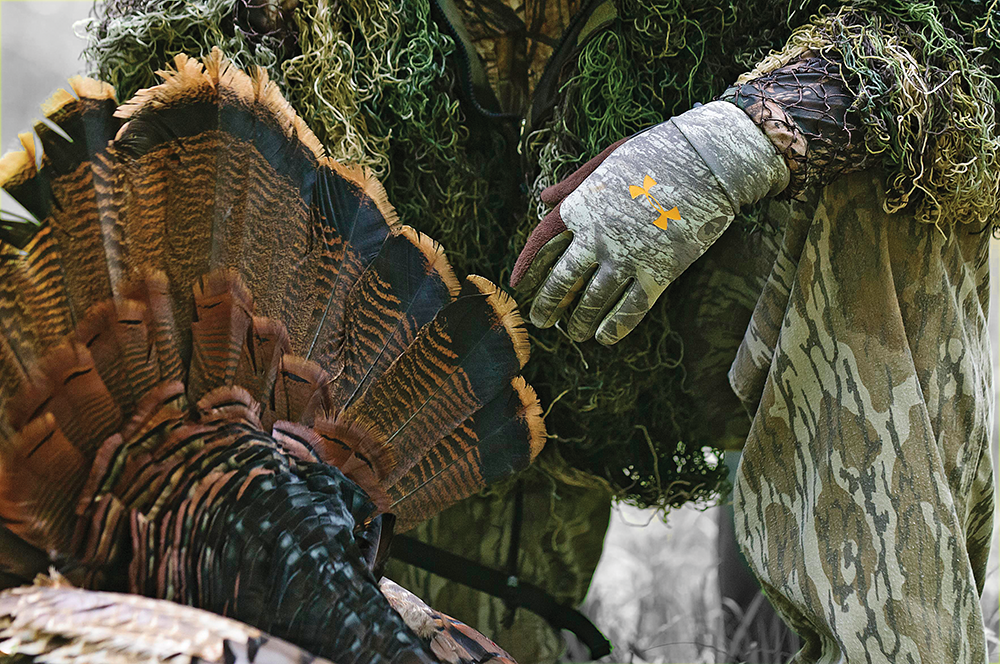 STEPPED-UP SCOUTING
Winter flock dispersal brings a sense of seriousness with it. It’s time to locate the gobblers for the forthcoming season. However, merely driving around back roads and listening for a couple of hours no longer cuts it if you find yourself hunting an area with fewer birds.

“I’m an aggressive hunter, so I probably scout more than I need to. But I’m even more serious about it now,” says Farr. “I do a lot of listening, but toms won’t do a lot of gobbling when they hit the ground. And there are fewer prospects out there. So I’m listening hard for soft clucks and putts.”

Even more important to Farr is the turkey sign that doesn’t get carried off on a springtime breeze.

“What I really concentrate on is patterning birds—-finding out where they are and where they’re going,” he says. “I’m looking for feeding areas, dust bowls, and strut zones. I don’t mean those places where you might see a few wing-drag marks in the dirt. I want spots where there are trenches dug in the ground.”

Caggiano has stepped up the intensity of his scouting as well. “I used to scout every day—go to 10 properties and put 60 to 70 miles on my truck,” he says. “Now, I might drive 30 miles, but I’m not just going to some high spot to listen. I’m wearing full camo and spending a bunch of time in the woods trying to figure things out. I want to learn the habits of individual birds mostly because that’s all that might be there. I want to know exactly where a gobbler roosts, how he sounds, where he’s going, and if there might be other birds in the group.”

“My birds have been down for 10 years,” Story says. “So I’ve changed it up. For one, I’ve changed counties. I also find myself beating on a lot more doors trying to get permission from landowners. I spend about as much time scouting other guys as I do the turkeys. You really need to walk in a lot farther to get on birds and away from that competition for fewer birds.”

“I use trail cameras more now for turkey hunting than I ever have before,” he says. “I’ll put them in food plots, strutting areas, and woods roads. If you pack away your trail cameras after deer season, you’re making a mistake. They work awesome for spring gobbler scouting.”

THE TURKEY CRACKDOWN
Fewer birds and less gobbling combined with the usual seasonal peaks in gobbling intensity and henned-up toms make it a wonder that anyone ever kills a turkey anymore. Today’s turkey hunting challenges are many, but they’re not insurmountable. Those who are most successful have been savvy enough to shift their in-season strategies with the changing conditions—in some cases completely abandoning tactics that used to work.

“Calling, decoying, aggressiveness, roosting, patience—all of those things are different,” says Caggiano. “Take calling, for example. Like most guys, I’d rely a lot on hen yelps and cutting. Now I find that gobbler yelping and gobbling work better. I’m not exactly sure why, but my guess is that with less competition out there for the available hens, picking a fight with a gobbler by sounding like another gobbler gets better results. It’s the same with decoys. I actually use them more these days than I used to, but it’s almost always a single strutter. Last season, we killed five birds that came in just for a fight with the decoy.”

“I’m more of the run-and-gun sort of hunter,” says Farr. “But where the bird numbers are lower, I’m a lot more passive. I’ll soft-call more, maybe put out one feeding or submissive hen decoy and wait longer.”

“My level of patience has changed,” says Caggiano. “If I had a gobbler that was badly henned up five years ago, I’d just leave him for later and go and find another turkey that would work. Nowadays I’ve got to wait him out.”

“My aggressiveness is very, very different now,” says Quaker Boy Game Calls’ Chris Kirby, who hunts in western New York. “Although I still call just as aggressively as I used to, I don’t push it very much when it comes to getting into position. I’ll not try to get to within 50 or 75 yards of a bird because I’m afraid that I might spook him. I’ll set up 100 yards away and just hope that I can call him in from there.”

“It’s such a catch-22,” says Story, who spends a lot of time hunting public land. “All season you’re dying to get on a hot turkey. Then you find one and he’s gobbling hard, but everyone else is on him, too. You’ve got to wait him out. There are just no other birds to try and set up on.”

TROUBLE IN PARADISE
It is not yet known if recent regional declines in wild-turkey populations are permanent, nor what might be causing them. Here are numbers from some areas of special concern.

Tennessee
The 2015 harvest was the lowest in 7 years.

THE SEARCH FOR ANSWERS
As the hunt for clues to wild-turkey population declines accelerates, researchers have homed in on several possible causes, according to Tom Hughes, assistant vice president of science and technology for the National Wild Turkey Federation.

“There might actually be multiple factors,” says Hughes, “Some of them may be outside of our experience. Take habitat for example. Turkey hunters don’t normally think of mature habitat as necessarily being a bad thing for turkeys. However, we’re finding that it can be because it does not provide sufficient nesting or brood-rearing conditions. Think about some of the timber in the Appalachians and New England and in our national forests, for example. Brood habitat, where poults can feed and find protection from predators, is critical. But it might not exist in some areas. Consider, too, that a decline in production may not be necessarily mean a decline in population. Some areas may have longer-lived hens. These are all part of what we’re studying.”