8-Step Strategy for Hunting Fall Turkeys Without Scattering Them

Scattering fall turkeys doesn't fit every hunter or situation. Here's how to hunt intact flocks and still get your bird 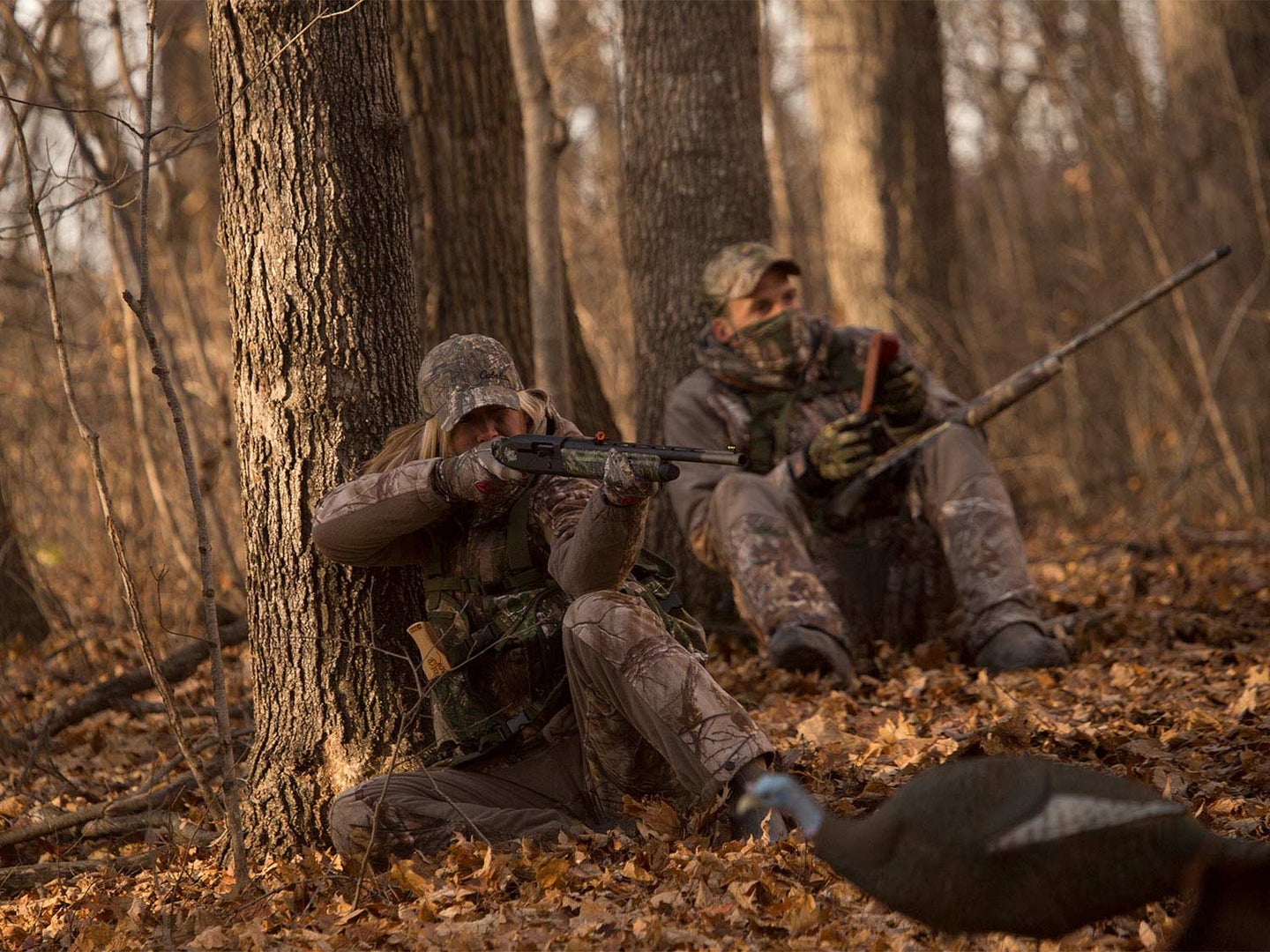 On a spring turkey hunting trip to Tennessee, the very year the first fall turkey hunt was to take place in my native Wisconsin, I asked my hosts for advice on how they hunted turkeys in autumn. They described the classic scatter-and-call-back scenario, whereby a hunter rushes a flock of turkeys to scatter them to all directions of the compass, then sets up and goes to work calling the lonely, discombobulated birds back in to re-group with their flockmates.

Those guys had several long Appalachian ridgelines at their disposal, with multiple turkey flocks roaming the hills. When I thought about the two small farms I had access to for turkey hunting back home, I thought there had to be a different way. Why booger and try to call back, then shoot at, and scare again, the very turkeys that I wanted to hunt all fall?

So I decided to go “scatter-free,” as in, hunting turkey flocks as they go about their natural daily business, much like you would whitetails. Here’s the eight-step process that I have developed since then.

While fall gobblers that hang out in loose bachelor groups are certainly huntable, they are extremely difficult to target, so we’ll leave them for spring and spend our time here talking about all those other (I might add, mighty tasty) birds.

Hens, jennies, and jakes travel in family flocks. As fall goes on, a couple of hens will sometimes join forces, and broods, to make super flocks. Some jakes get so raucous though they are sent off in their own rowdy and inquisitive juvenile flocks, which are very talkative and very fun to hunt. Hens that didn’t pull off broods often group up together too.

These are the birds you’ll be targeting. And they all have two things in common: They’re naturally curious, and they eat a lot. Those are the main factors you’ll play on.

Scout fall turkeys like you would whitetails. That means carefully, and from a distance as much as possible, so the birds don’t know you’re around. Vantage points, vehicles, eyeballs, and binoculars are your best scouting tools. If you can figure out what the turkeys are doing every day without letting them know what you’re up to, you’re gold.

One beauty of fall turkey scouting is that you really don’t have to get serious about it until a few days before the season. As fall progresses and the landscape changes almost daily, turkeys are continually changing their feeding and movement patterns.

But that means something else too: What the turkeys were doing at the start of the season—when the forest’s leaves are full, and the meadows are full of greens and bugs—is way different than how they’ll pattern when the leaves are down, the fields brown, the acorns dropped, and the grainfields harvested.

Read Next: 7 Reasons You’re Not Killing Turkeys on Public Land

A fall turkey’s life revolves around two priorities: surviving and eating. Surviving is inherent to their nature. You already know this. That’s why figuring out what the birds are feeding on, and where, is your chief priority for scouting.

4. Figure Out the Roosts

Do you know where your turkeys are roosting? That’s the critical step to figuring out where and how to intercept birds. To find a roost, get out and listen at dusk or dawn. Fall flocks will make a racket as they fly down and yack it up to gather in the morning. Though the birds make less noise at night, you can still hear them flapping and winging it up into the branches.

You can also walk the woods midday to try and find trees with feathers and droppings below them. This is good evidence of roosting. Some turkeys will use the same roost place night after night. Other times, it seems birds go on a circuit and only visit a certain roost site every few days.

Avoid getting in tight and hunting a roost itself until you are closing in on the end of your season. Just as scattering can move turkeys out of your neighborhood, meddling with turkeys in their immediate roost area can send them packing for a new address.

A better plan is to figure out how the birds get from roost area to feeding area (morning), or from feeding area to roost (evening), then hunt the travel lane or corridor that gets them where they’re going much like you would set up for a whitetail.

Read Next: How to Call Turkeys: Has Cutting and Running Lost Its Effectiveness?

You can hunt the food, but do it under advisement. Like hunting whitetails on a food plot or feeding area, you can push your quarry off the food source and onto another one, and there are usually plenty of options for the birds in fall.

If you do decide to hunt a food source, conduct your hunts as you would in the spring: Arrive in the dark, wait until any turkeys are out of the area before you leave later on, and if you shoot a bird, let the others go about their business before retrieving your prize.

With this plan, we may be hunting fall turkeys much like we do whitetails, but turkeys offer one key difference: They tootle about, scratching and feeding along, pretty much all day. You can hunt them late-morning through mid-afternoon in cover where they feel safe to feed or loaf around along travel funnels.

Take a sneak through the woods and look for signs of turkey-scratching. Locate the furrowed, turned-over windrows of leaves and patches of bare ground that scratching turkeys leave behind, and you’ve found a good daytime loafing and feeding spot.

One of the joys of fall turkey hunting is the opportunity to call freely and often, and not really have to worry about your skill level. Some of the “worst” turkey sounds I have ever heard, as a matter of fact, came from wild turkeys themselves. But you do need to understand five important call sounds to use, what those sounds are saying, and what calling tool is best for making them.

Yelps are your basic fall call—the keowk keowk keowk sound a hen makes to communicate with other turkeys, including her young. Most yelps happen in strings of three to eight. But a lost yelp—where birds are really looking to get back together—might go 12 to 16 yelps before tailing off. Yelps are bread-and-butter for bringing young birds over, and for attracting other hens or flocks. Use a box call or mouth call.

Clucks are important when you have birds in close and a squawky yelp would just focus too much attention on you and your hideout. Clucks are also good to occasionally make as you sit and wait. Always be careful not to make the sharp pitt or putt sound that represents an alarm putt. Clucks are softer, relaxed, more drawn out, and not staccato. Use a mouth call or pot call, but box calls can cluck too.

Purrs are soft, rolling prrrrrrs or lilts that happy and content turkeys make, which makes this another good turkey sound to make when closing a deal or when just when sitting around near a feeding or loafing area. Slate calls are perfect for purrs, but with some practice, you can get good at purring on a mouth call.

My personal favorite call of all for fall, the kee-kee, is a whistling triplet of calls—kee kee kee—that a young turkey makes when trying to yelp. Kee-kees indicate a lost or distressed turkey, which can grab attention from a passing flock or bird and get them to start talking back and approaching. Mouth calls are best for making kee-kees, and I have even used a wood duck whistle call.

A kee-kee run is a simple set of kee-kees followed by a couple really bad-sounding yelps: kee-kee-kee-yowk-yowk. Young jakes make this call. Like the kee-kee whistle, the kee-kee run is good at attracting attention and curiosity from other birds.

Hopefully, these eight steps will start you down the path of hunting fall turkeys scatter-free. There is no doubt that scattering is fun, and that it can be very effective if you get a proper bust on the birds. But when you’re going to be hunting the same flock or two of turkeys all season, it’s best to put this low-impact approach to work on the birds in the fall, and keep them right where you want them.