Don't be fooled, coyotes are relentless and dangerous predators. 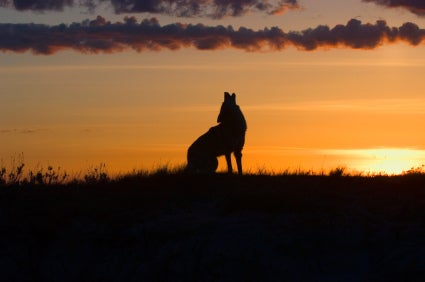 A coyote’s attack strategy is simple: He picks his target and locks on like a heat-seeking missile. He’s relentless. If his target is big, he’ll go for its throat and choke it to death. If it’s small, he may try to run off with it still alive in his jaws. If it’s helpless (such as a cow in labor), he’ll just eat it alive, not bothering to kill what offers no resistance. But in each case he’ll stay locked on, one eye on his meal, the other looking for every opportunity.

“It’s genetic,” says Professor Rex O. Baker of California State Polytechnic University in Pomona, who investigates attack scenes for various wildlife agencies and is considered the nation’s leading authority on coyote attacks. “When coyotes are in ‘attack mode’ they stay tuned-in to their prey, often staying at the scene. They may even return time and time again, looking for an opportunity.

Such tenacity can be attested to by a family from Newport Beach, Calif. A father was working on his backyard deck when he spotted a coyote stalking his two-year-old son.

Coyote or the Neighbor’s Dog?

Differences in the tracks of canids are subtle yet distinct. Coyote tracks are smaller and more elongated (with longer lateral toes) and have less distinct heel pad impressions than those of a dog of approximately equal size. Fox tracks are smaller still, and their straddle (the track width) never exceeds 3 1/2 inches, compared to the average 4- to 6-inch straddle of both dog and coyote trails.

Once confined to the vast great plains, coyotes flourished on this continent in the wake of European settlement. The extermination of wolves, the creation of extensive grasslands where mice and hares thrive and the introduction of domestic livestock as an additional food source have now brought coyotes to every section of the U.S. and virtually every type of habitat, including urban environments.