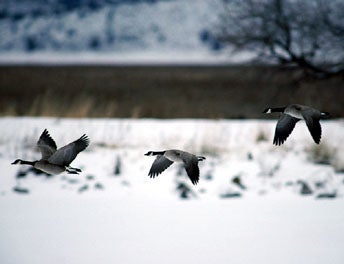 Residents of a posh Ohio gated community are appalled at the housing association’s plan for eradicating local Canada geese. The plan calls for rounding up the bothersome honkers and beheading them. Lobbing the heads off of geese is an acceptable method according to a permit issued by the Ohio Department of Natural Resources.

Richard Loughry a homeowner in Lake Mohawk told the Associated Press that the method is “barbaric.” However, decapitation is widely accepted when managing geese because it kills them instantly.

Damon Greer, a biologist with the state, told the AP, “It’s the same way that grandma did when she raised chickens out on the farm.”

The permit grants the homeowner’s association the right to capture 100 birds. They will be rounded up and then separated by age; the young ones will be relocated and the adults will face the guillotine.