How to Plan the Ultimate Waterfowl Hunting Road Trip

Don’t wait for the ducks and geese to come to you. Load the truck and hit the road for the best hunt of your season 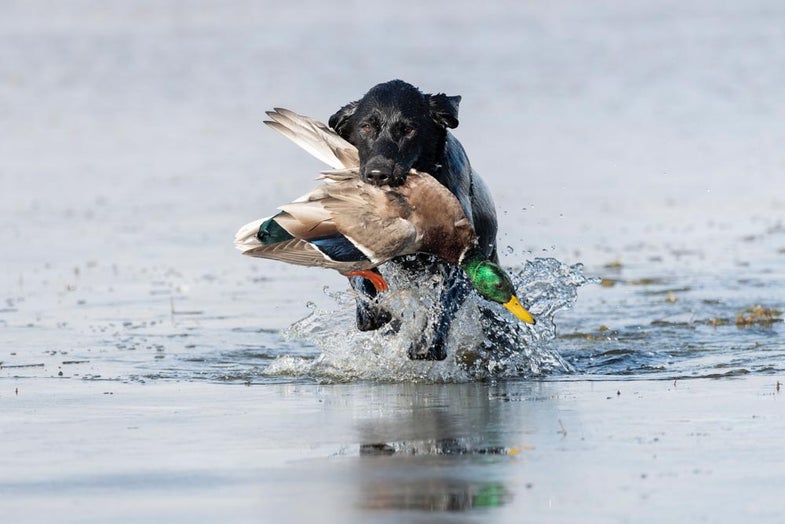 This fall, I gathered my gear and drove west from Minnesota to the prairie pothole region of central North Dakota to meet hunting editor Will Brantley and photographer Bill Buckley for a week of DIY duck hunting. To sum it up, we got lucky—really lucky. An early arctic blast pushed the leading edge of the migration right into our laps and we had five days of epic hunting. You can see the full photo essay from this hunt in the Winter 2019 issue of Outdoor Life.

I took some critical tips away from this bird hunting road trip and others I’ve made to the Dakotas chasing ducks and geese. When it comes to waterfowl hunting road trips, there’s no guarantee you’ll shoot limits of birds every day. But with the right gear, hunting partners, and attitude, I can guarantee you’ll have a damn good time. Here are some of my takeaways to help you become a road warrior waterfowler. 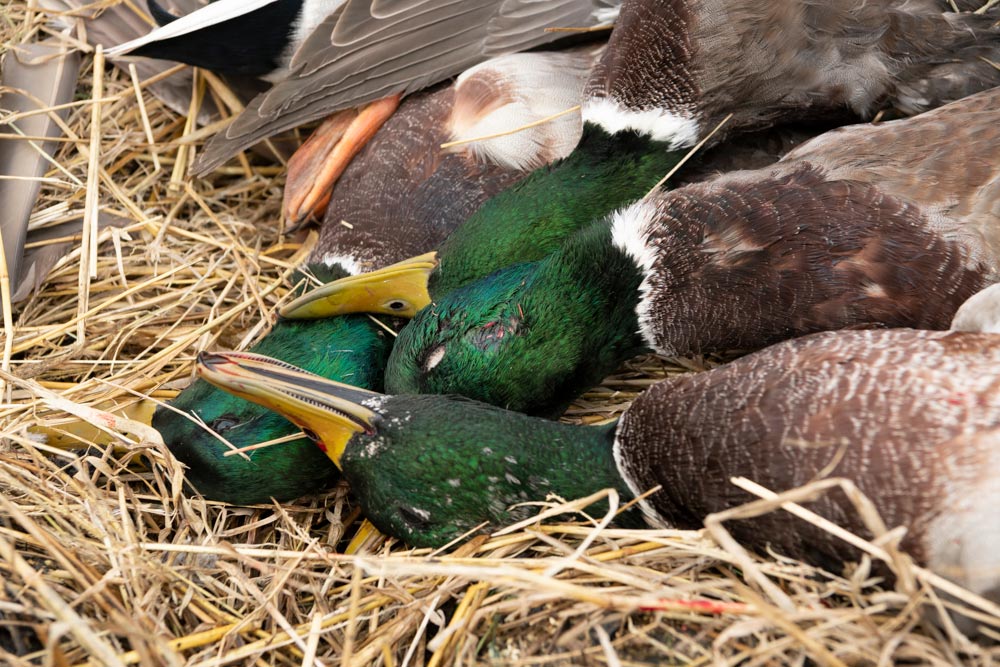 A pile of North Dakota greenheads.

Canada’s prairie pothole region. The Dakotas. Arkansas’ flooded timber. The grain fields of southern Kansas and northern Oklahoma. There are plenty of waterfowl hotspots that are worth a long drive. You’ve probably already been dreaming about hunting one of these spots; now its time to do your homework.

All of these go-to waterfowl destinations have stories about them you can find through a simple Google search. Plus, in this YouTube era, there’s plenty of video content to peruse. This content isn’t going to give away exact spots to hit. But it will give you some tips about the timing of the migration, the types of habitat that birds are using, and effective decoy spreads.

Then start digital scouting. Find the big public marshes and refuges and talk to the managers there. You probably don’t want to get in with the masses on these landmark public land and water areas, which historically hold birds and a lot of hunters. But, a manager should be able to tell you when the hunting is traditionally good, and he or she might be able to clue you in to nearby hotspots. Ideally, you’ll be able to find good habitat around these main stops. Our best shoots were on private land that we gained permission to hunt. That doesn’t always happen, so you’re definitely going to need public-land hunting opportunities as backup options (more on that later). 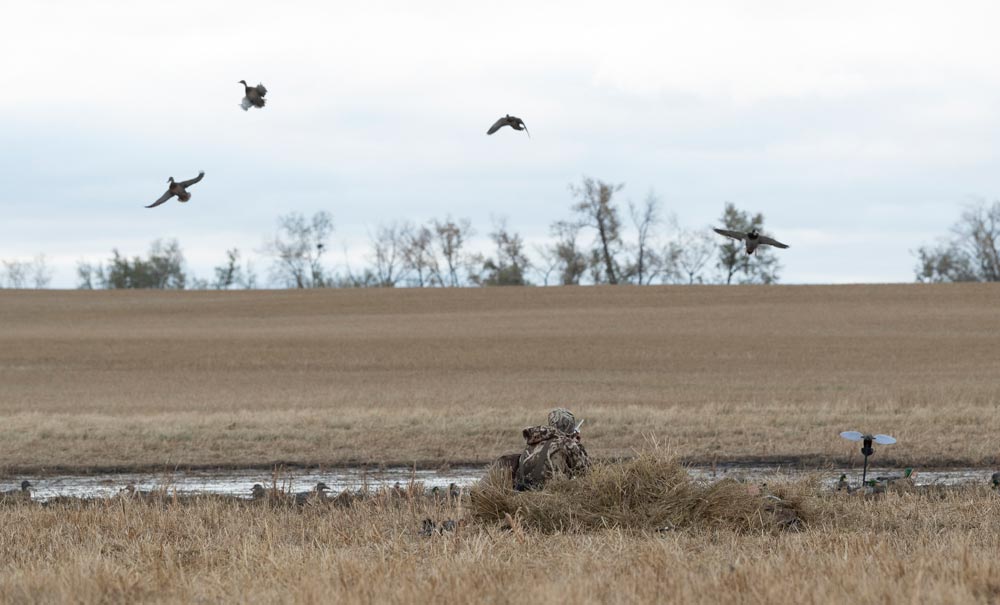 Ducks setting in to our spread.

It’s all about weather. We had originally planned to road trip all the way up to Saskatchewan, but an early cold front froze the potholes there and started sending birds south. We called an audible and decided to hunt North Dakota instead of trekking all the way north.

North Dakota greeted us with waves of migrating birds fresh out of Canada. It helps to have contacts in the area you are road tripping to (luckily, we did), plus the area to the north of it. You can get some of this info online through websites like Ducks Unlimited’s migration tracker. But most of these forums are moderately reliable at best. It’s far better to get a report from a trusted source on the ground, even if that source isn’t necessarily a hardcore waterfowl hunter. Ideally, you want to be just ahead of a main migration. You want to be hunting “fresh birds,” which are ducks and geese that have just migrated in to the area. So watch the weather more than forum scouting reports. This site from NOAA reliably tracks the snow and ice line. In the end, planning and legwork only get you so far, you’ll also need some good old-fashioned luck. 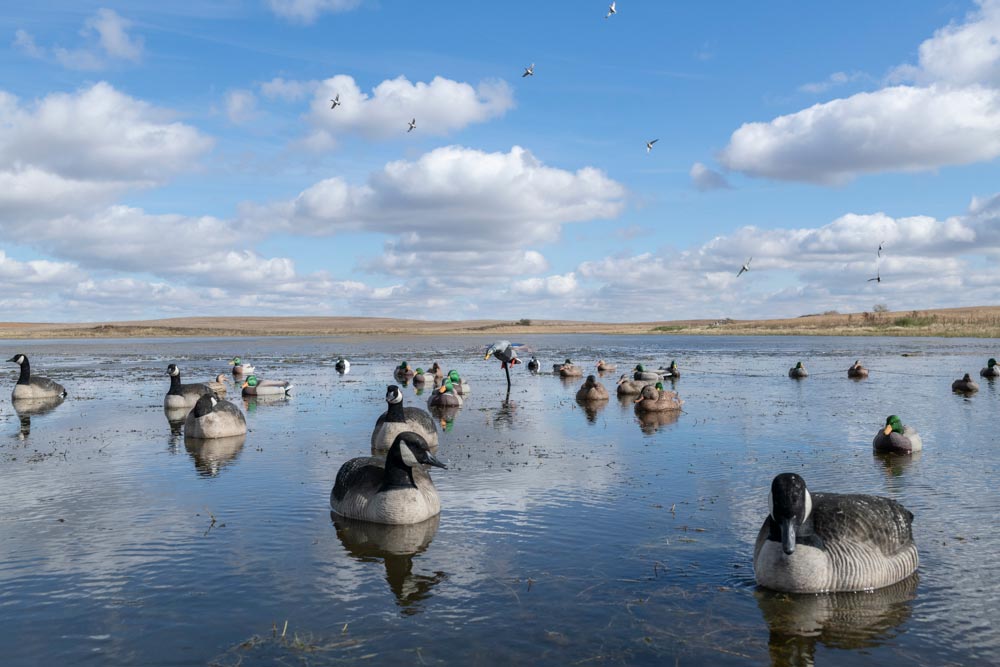 Our decoy spread of Canada goose and mallard floaters.

Choosing the right gear is a critical part of a road trip hunt, because you can only cram so much stuff into a truck (or a truck and a trailer). We decided to hunt water exclusively. Even though we knew there would be geese hitting the local fields, we also knew we didn’t have enough space to run a proper field spread for ducks and geese, plus a good water spread. So we left the field spread at home and packed five-dozen mallard floaters, two spinners, six goose floaters, and two-dozen diver decoys, plus waders, and an old canoe. We also brought layout blinds because we expected many of the potholes to have minimal cover. We ended up hunting out of those layout blinds every day except for one. We had our best shoots in small puddles in the middle of cut wheat fields. The takeaway? Pick the spread and gear that give you some flexibility to hunt different habitats and different species, but know that you can’t bring it all. It’s almost always better to have one really good spread, than two half-ass spreads. 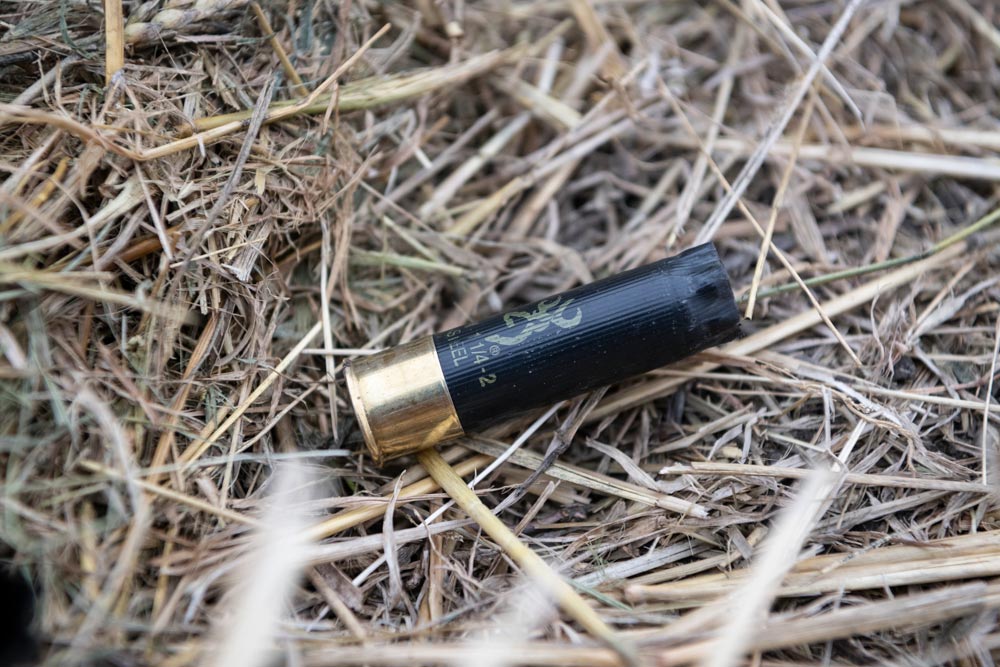 A spent Browning BXD No. 2 shell.

Don’t fret too much over shot shell selection. Three-inch No. 2 shells that pattern well through your duck gun will work on pretty much any waterfowl species that comes into the spread. And, it doesn’t hurt to have some BB in the truck if you are targeting geese. We shot a variety of loads on our North Dakota trip, but the two standouts were Browning’s BXD waterfowl load in No. 2 and Federal’s wicked new Black Cloud TSS, which combines No. 3 steel pellets and No. 9 tungsten super shot pellets. 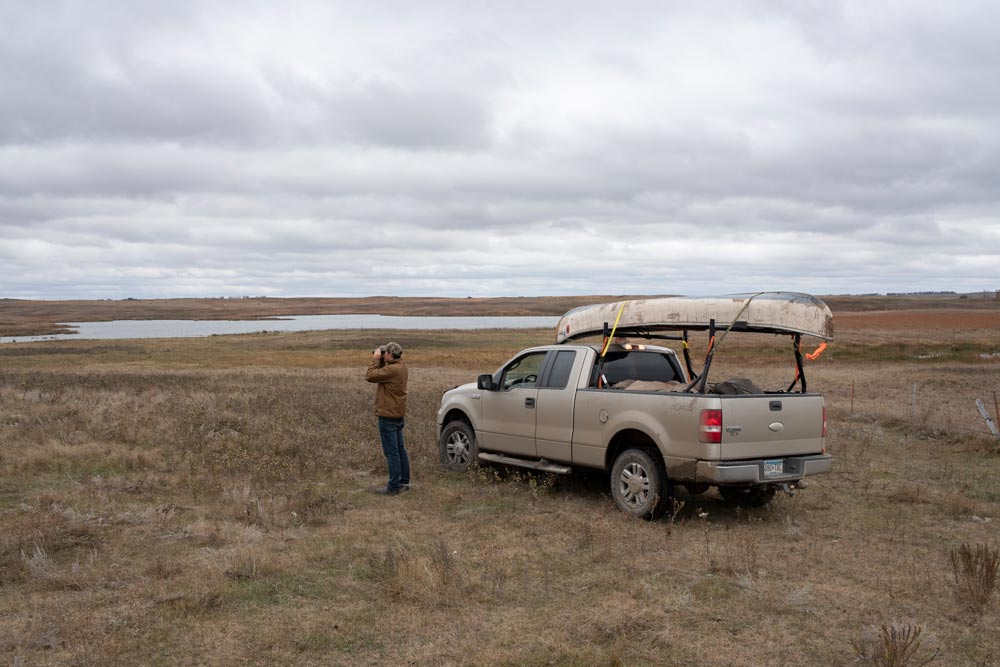 Glassing ducks in a distant pothole.

As Mike Tyson said, “Everyone has a plan until they see 500 greenheads landing into a quarter-acre pothole.” Ok, maybe he didn’t say exactly that, but you get the idea. Planning is great, but on a waterfowl road trip, you’ve got to roll with the punches.

Spend as much time scouting as you do hunting. If it’s your first time in an area, you’ll learn invaluable information for return trips. If you’ve hunted the area before, you’ll find new sweet spots. The beauty of a road trip is that you’re mobile. If the birds aren’t where you expected them to be, just keep driving until you find them. If that means you end up 300 miles away from where you originally planned to hunt, who cares? That’s all part of the fun. 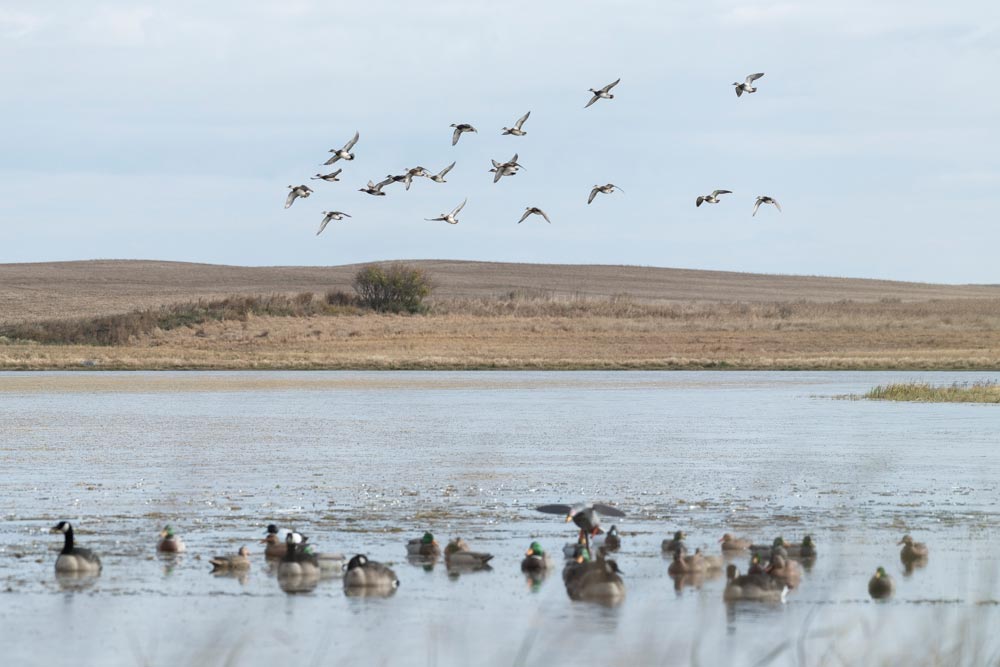 Take What the Migration Provides

A flight of incoming gadwalls.

On our first evening of scouting we pulled up to a pothole that was swarming with gadwalls. In a few other areas we spotted flights of mallards and teal, but nothing nearly as concentrated as that pocket of gaddies. So what did we do the next morning? We hunted those gadwall, had a barrel-burning shoot and limited out by 9:30 a.m. As the week progressed, we shot greenwing teal, redheads, wigeon, pintails, and yes, mallards. If we had held out for greenheads only, we would have missed that epic first-morning hunt. There’s no telling exactly what birds will be in the area, so be ready to hunt the birds you have and enjoy those mixed bags when you can get them. 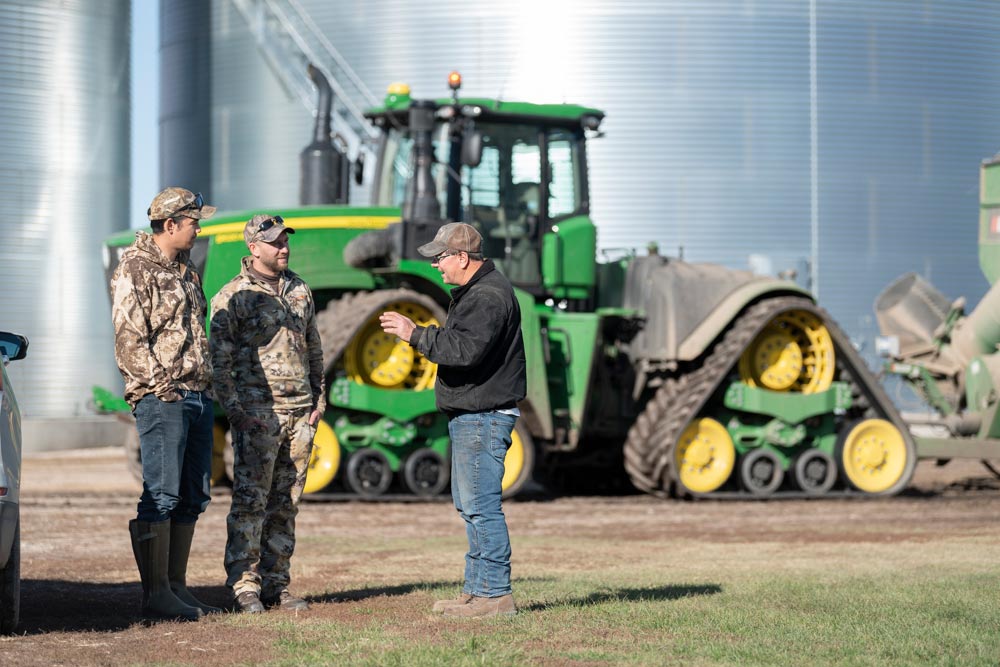 Shooting the breeze with a local farmer.

Some folks argue that the days of knocking on a farmer’s door to get hunting permission are over. We found that to be totally untrue. Sure it may be harder to get permission than it used to be, but it’s far from impossible. About half the farmers we talked to let us hunt their ground.

One key is to meet the farmers in person. A friendly conversation and a good handshake still go a long way. We had one farmer tell us flat out that if people call on the phone to get permission to hunt, he tells them no. If people stop by and introduce themselves, he usually lets them hunt. We shot three days of limits off his farm. Use common sense and remember these folks don’t owe you anything. Do not pull up to their farmhouse after dark around dinner time. Use apps like onX to make sure you understand property boundaries and make sure you’re talking to the right landowners. In North Dakota, you can hunt private land if it is not posted (find the regulations here). But you should avoid doing that. It’s always better to talk to a landowner and get permission. The most successful waterfowl hunters are able to build up a network of landowners in an area who allow them access. The only way to do that is to be extra courteous, friendly, and to prove that you are trustworthy over time. 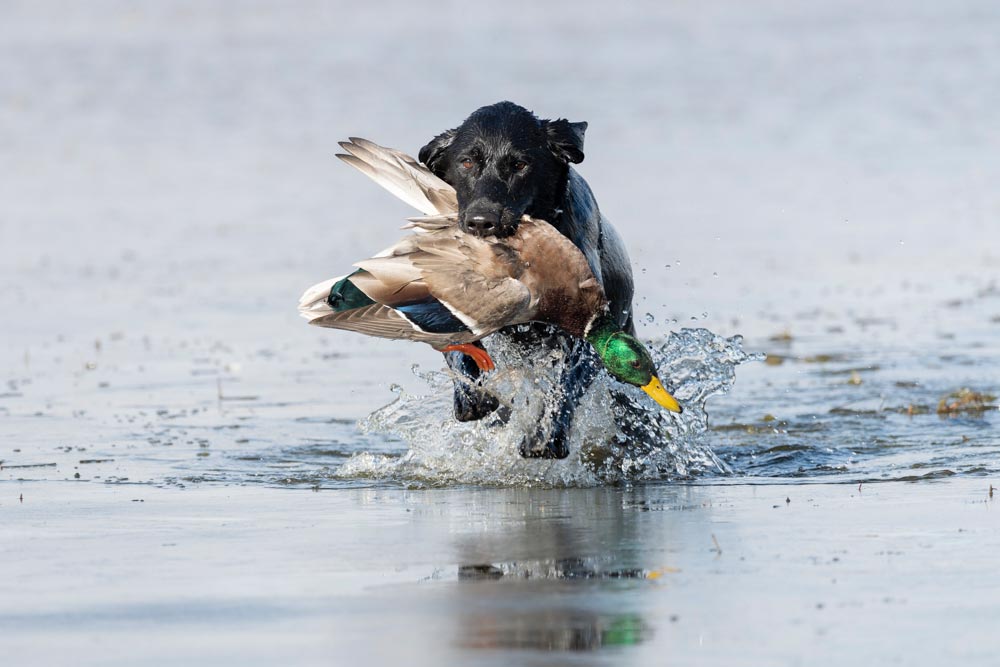 One of the main reasons it’s harder to get permission on private ground is because of bad behavior within our own ranks. If you rut-up a field, leave a gate open, shoot too close to the cows, or leave spent shells and garbage on the property, that landowner may very well close access to his property, not just to you, but to anyone else who might want to hunt there in the future. Most farmers (at least the ones that I’ve met) are happy to have some company and good conversation, but they have no tolerance for B.S. So even though you’re on a road trip, treat the area like it’s your home hunting ground. All of our access depends on it. 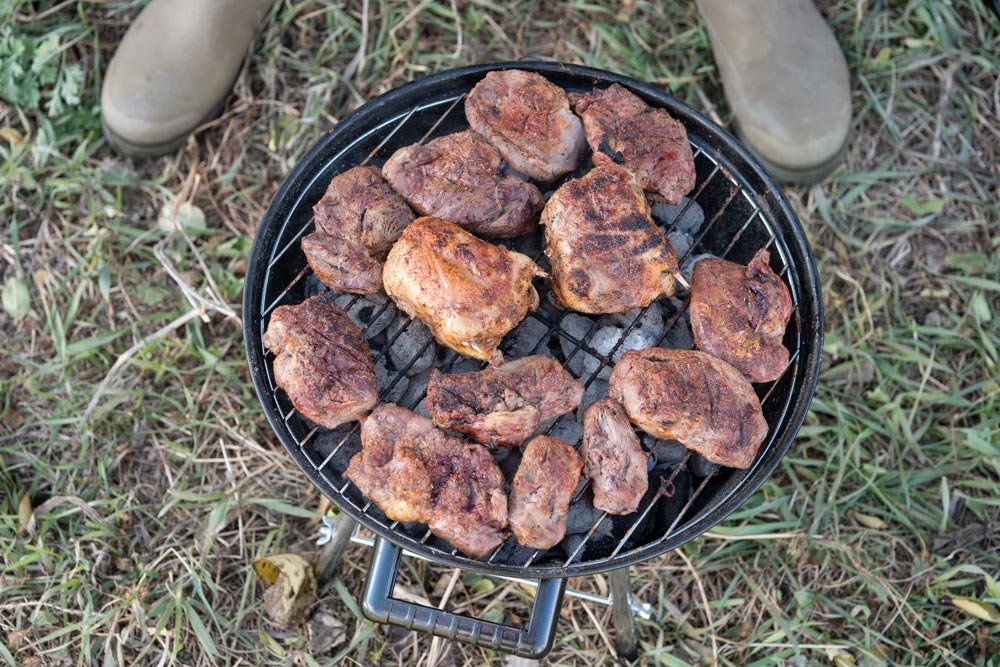 Be Ready to Eat

If everything goes well, you’ll be shooting limits of birds, which means you’ll eventually have to eat some of those birds if you are going to keep hunting. Plan ahead and bring a little grill and some spices for your ducks and geese. Prepare them however you like, but plucking the breast and grilling them skin down over red-hot coals is a fast and delicious way to eat up a limit. 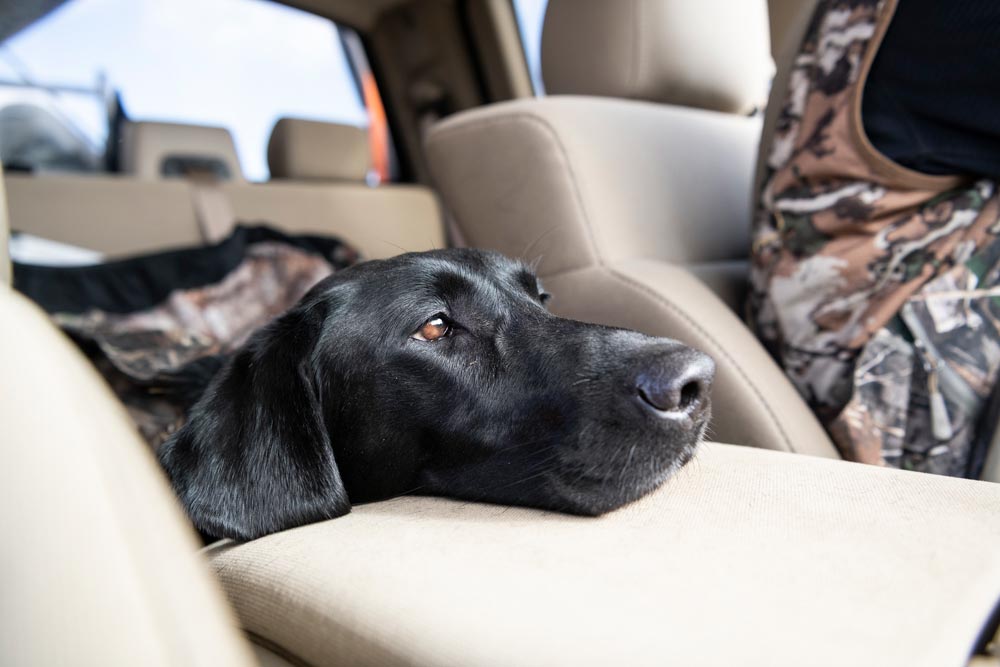 Relaxing on the long drive home.

The first time you hunt a new area should be considered a recon mission. Take careful notes about where you hunt, weather conditions, bird activity, and environmental conditions (were you there during a drought?) and use that information for a return trip next year. Mark your best spots on a map or mapping app, but also mark spots where you saw birds but didn’t get to hunt. During our trip, we saw thousands of mallards roosting in a small lake and then flying across the road to hit a field. We met the landowner who didn’t give us access because he had some buddies coming to hunt that weekend. But, he told us that if we came back and he didn’t have other hunters, he’d give us permission. We thanked him, shook his hand, and drove off. You can bet I’ll be swinging by his place next fall.