From turkey guns and chokes, to calls and vests, this round up has a little something for everyone 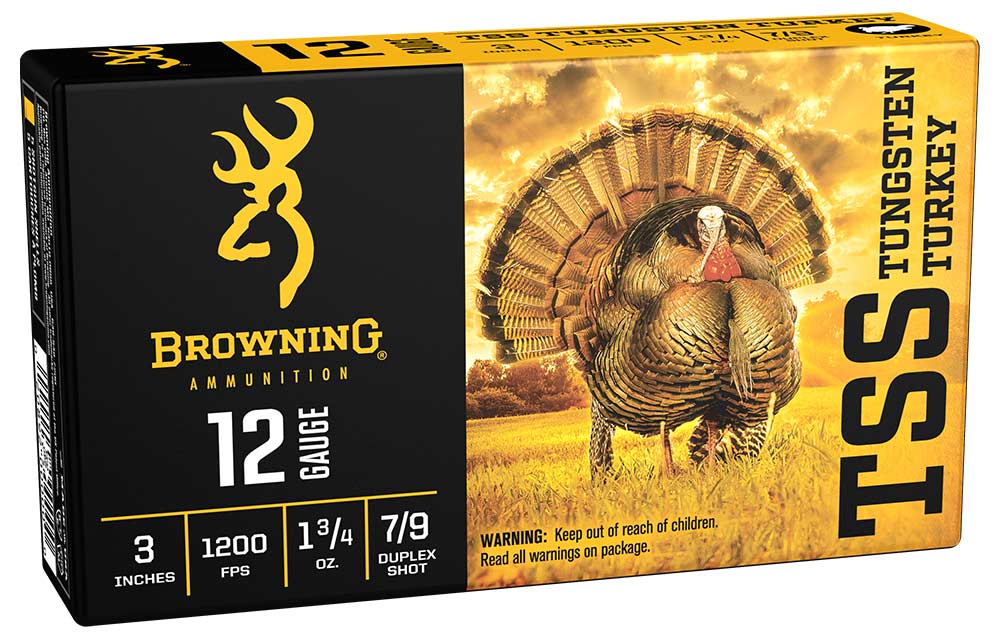 There’s always a lot of great, new turkey hunting gear each spring, but this year manufacturers went all out. Tungsten turkey loads, and specifically Tungsten Super Shot turkey loads, are creating the most buzz, but there’s also a wave of new shotguns, choke tubes, vests, and calls, that are worth paying attention to. Here are my picks for the 20 best new gobbler getting products for 2019. 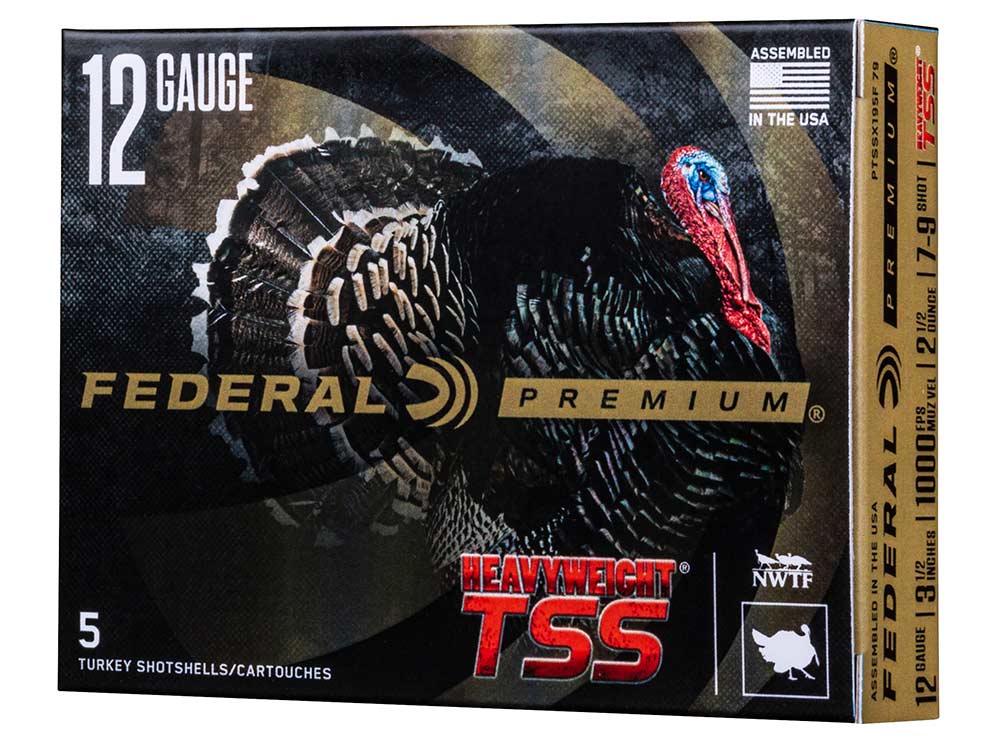 New from Mossberg this spring is the 500 Turkey in .410-bore. It comes with full-coverage Mossy Oak Bottomland camo, a fiber-optic front sight, 3-inch chamber, 5+1 capacity, and a 26-inch barrel with a fixed full choke. That longer barrel should provide better ballistics than typically shorter turkey barrels. This small-bore pump promises to be the ideal platform for delivering a lethal dose of Federal’s new .410 TSS turkey load to a gobbler’s noggin. At 6.5-pounds, it isn’t too light or too heavy, making it a great choice for beginning turkey hunters or those sensitive to recoil. MSRP $500 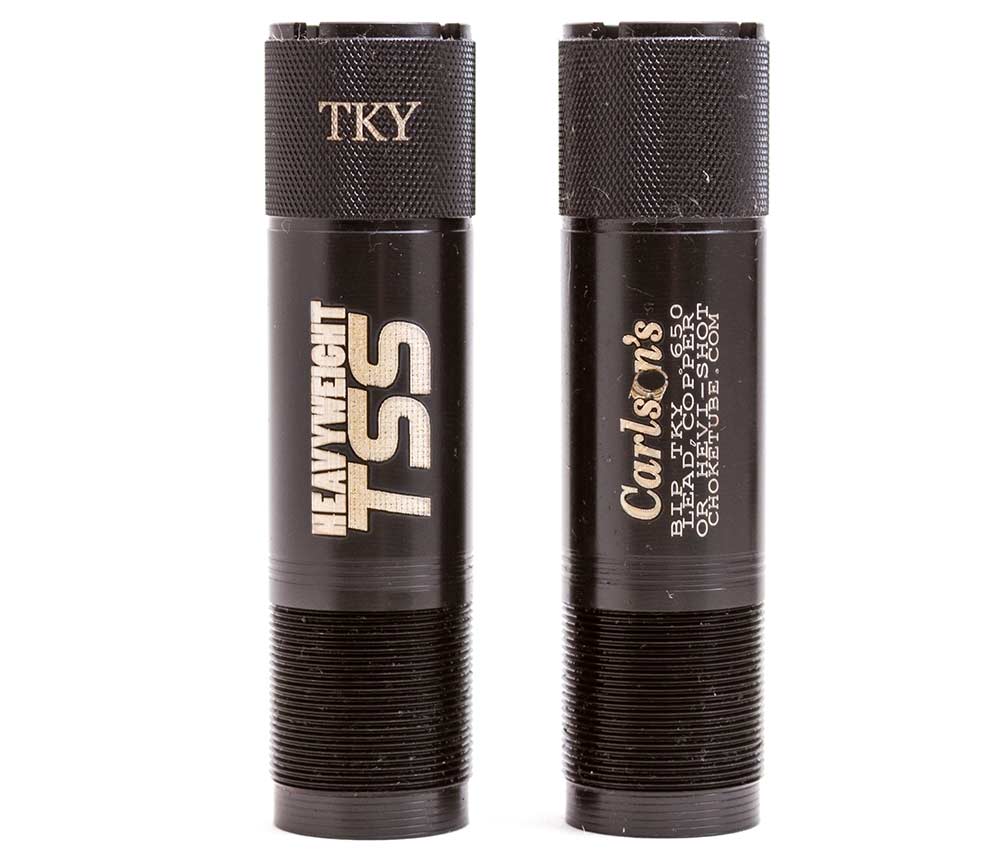 Carlson’s newest choke is designed specifically for shooting Heavyweight TSS turkey loads. What differentiates this TSS choke from Carlson’s many other turkey chokes is that it has much tighter constrictions to squeeze optimum patterns from those smaller No. 7 and 9 TSS pellets. For example, a typical 12-gauge Remington turkey choke internally measures .665” or .660”, but Carlson’s TSS Rem-choke measures an ultra-tight .640”. Although designed for TSS, patterning may reveal these chokes also work well with other turkey ammo. TSS chokes are available for most popular 12- and 20-gauge shotguns. MSRP $45

I’ve personally shot TRUGLO turkey chokes, and they have a reputation for producing some of the densest, gobbler-stopping patterns possible. The company’s new Head-Banger long-range choke is the latest ultra-tight turkey tube from this famed fiber-optic sight maker. Multi-phase internal grooving engages the wad and guides the pellets into a tight, even, consistent pattern. The Head-Banger is compatible with Hevi-Shot, TSS, Federal 3rd Degree, Winchester Long Beard, and other premium turkey loads, and is available for most popular shotguns. MSRP $60

The C-2 is one of Maven’s more compact optics. It’s also one of the more nimble and affordable models, all of which makes the C-2 a great choice for run-and-gun turkey chasers. This dependable, mid-range binocular employs a dielectric-coated Schmidt-Pechan prism system to deliver bright, clear, high-contrast images to the user’s eyes. Durable lens coatings that are waterproof, fogproof, and scratch resistant will stand up to years of hard use by even the most abusive of turkey hunters. The C-2 is available in 7×28 or, for $25 more, 10×28 models and comes with a lifetime warranty. MSRP $200

Spring turkey hunting often means mild temperatures. Sitka’s new line of Ascent clothing is designed for hard hunting in hot weather. Ascent pants feature ventilated, mesh-backed pockets and an internal mesh knee pocket in case knee pads are needed. The Ascent shirt is similar with duo mesh-backed, zippered chest pockets. The Ascent glove is lightweight, breathable, and has a durable Printed Ax Suede synthetic palm and smooth-faced index finger and thumb. There’s also a fast-drying Ascent cap and shin-protecting gaiter. All are available in versatile Optifade Subalpine camo, which is a great match for most spring turkey woods. MSRP ranges from $40 for the cap to $190 for the pants.

Primos has a pair of nifty new friction calls this spring. The Clear Cutter box has an ergonomic thumb indentation for placing the thumb against the lid to make realistic cuts, proving this call was designed by true turkey hunters. The Foggy Bottom pot call’s glass surface produces louder sounds than most boxes and is covered in Mossy Oak Bottomland camo so it won’t spook gobblers. MSRP $27 pot, $45 box.

Primos also has a new TSS choke tube. The TSS JellyHead is designed specifically for shooting TSS loads, but patterns well with Hevi-Shot and lead, too. Available for many popular 12- and 20-gauges, the TSS JellyHead has tighter constrictions than standard extra-full turkey chokes. MSRP: $80 choke

Red Head‘s new Heritage Series box call, designed by veteran turkey hunter Jerry Martin, has a walnut lid and sassafras box. The result is a pitch-perfect call that produces clear, ringing yelps and smooth purrs and clucks. There’s also a cherry/poplar model. The new Ozark Bottoms Collection includes boxes made of cherry and cedar with a purple-heart lid or butternut with a Brazilian cherry lid. The former has a mild tone. The latter has a high-pitched, piercing tone, making it a great locator call for striking long-distance toms. MSRP $20 – $40

Quaker Boy is known for its easy-to-use push-pins. However, that pin inevitably moves at the most inopportune time, making it difficult to carry a push-pin silently in a vest. With no external rods, The Slider solves that problem. This compact call is operated by an Ergo Finger Hole rather than a pin, allowing silent carry. Quaker Boy’s Magic Touch Slate, my go-to pot call for years, has been updated with this year’s introduction of the Magic Touch Glass. Quaker Boy has also combined three of its most popular calls into the new Kirby Klassic Combo: the Easy Yelper push-pin, the waterproof Hurricane box, and the Screamin’ Green Nasty Old Hen diaphragm. MSRP $30 Slider, $20 pot, $49 combo

Nothing fires up an old tom like the sight of an interloper moving in on his hens. The new HDR (Heavy Duty Realism) Jake decoy from Avian-X mimics an inferior intruder designed to make gobblers mad, not intimidate them. The decoy is slightly undersized and molded into a quarter-strut position that triggers just the right amount of agitation in a gobbler, especially when paired with an Avian-X hen decoy. The HDR Jake’s attitude can be adjusted by switching between two provided head poses – aggressive and submissive. For safety’s sake, never use a jake decoy on public land. MSRP $150 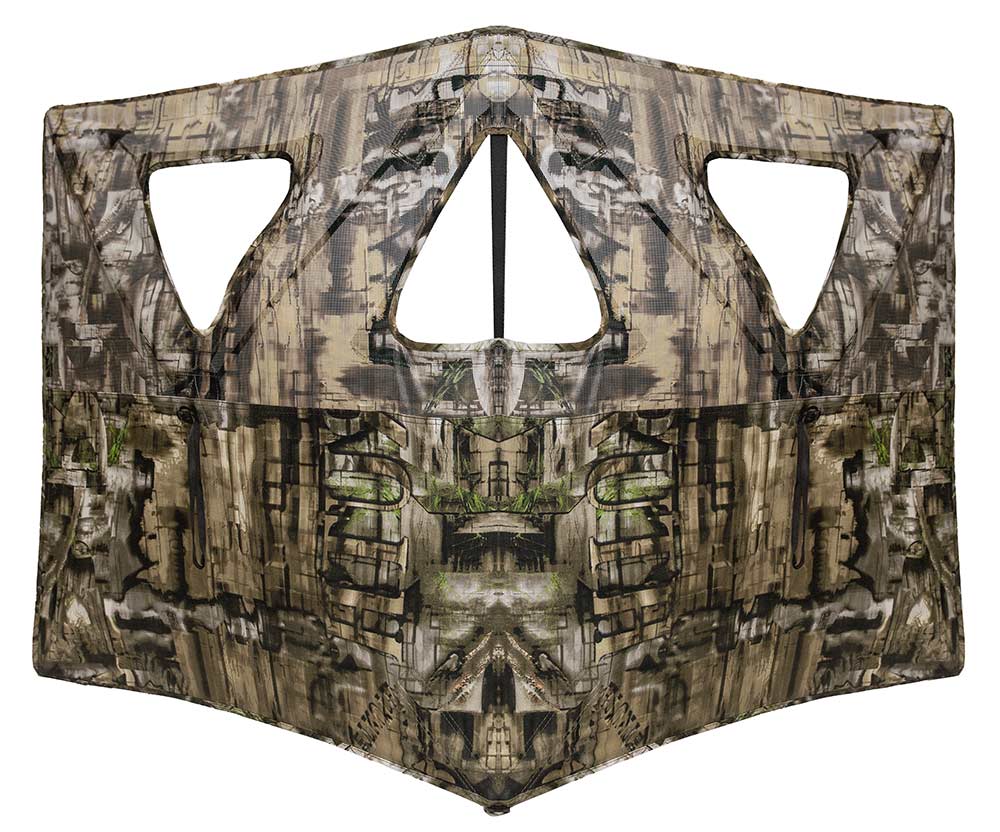 The new Double Bull Stakeout blind by Primos features SurroundView technology which allows an unobstructed field of view yet keeps the hunter hidden from birds. This two-sided, roofless, hybrid pop-up blind weighs just 4 ½-pounds, making it the ideal hide for mobile run-and-gun hunters who require both portability and concealment from a turkey blind. The two-hub design sets up in seconds. The bottom half of the blind is made of Primos’ Truth camo fabric, while the top half is Truth camo mesh. Three triangular windows provide multiple shooting lanes. MSRP $113

Benelli’s new SBE 3 Turkey Edition has received several Performance Shop enhancements performed by noted gunsmith Rob Roberts. The 24-inch barrel has a lengthened forcing cone and has is fitted with Robert’s Final Strut Turkey choke for improved patterns. The receiver and barrel have a tough Cerakote finish, while the tactical-style pistol-grip stock and forearm are covered in Mossy Oak Bottomland camo. The shotgun comes with a Burris FastFire II red dot sight and each gun is pattern tested with Federal Premium turkey ammo. This may be the ultimate turkey gun. MSRP $3,400 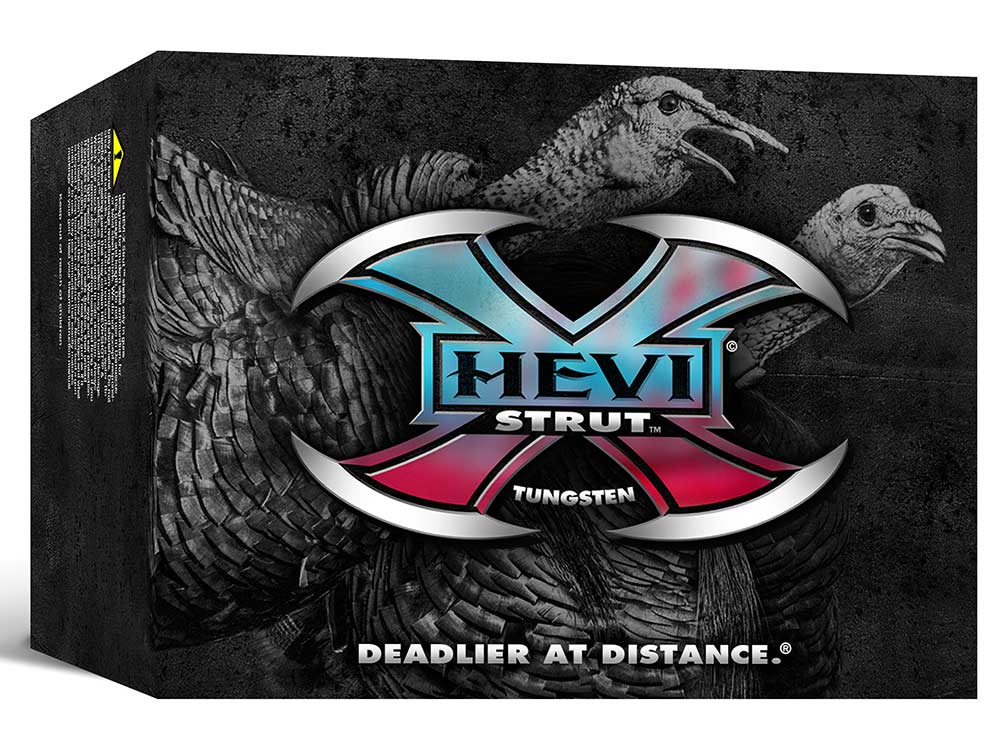 Hevi-X has introduced Strut turkey loads to join the already popular Hevi-X waterfowl loads in this year’s line-up. Hevi-X pellets have a slightly lower tungsten content than original Hevi-Shot pellets, yet are still denser than lead and retain greater energy downrange. The result is a lethal tungsten-based turkey load at an affordable price. Hevi-X Strut is offered in 3- and 3 ½-inch 12-gauge and 3-inch 20-gauge, all with duplex payloads of No. 5s and 6s, and .410-bore with No. 6s. MSRP $17 for 3-inch 12-gauge, 5 rounds per box 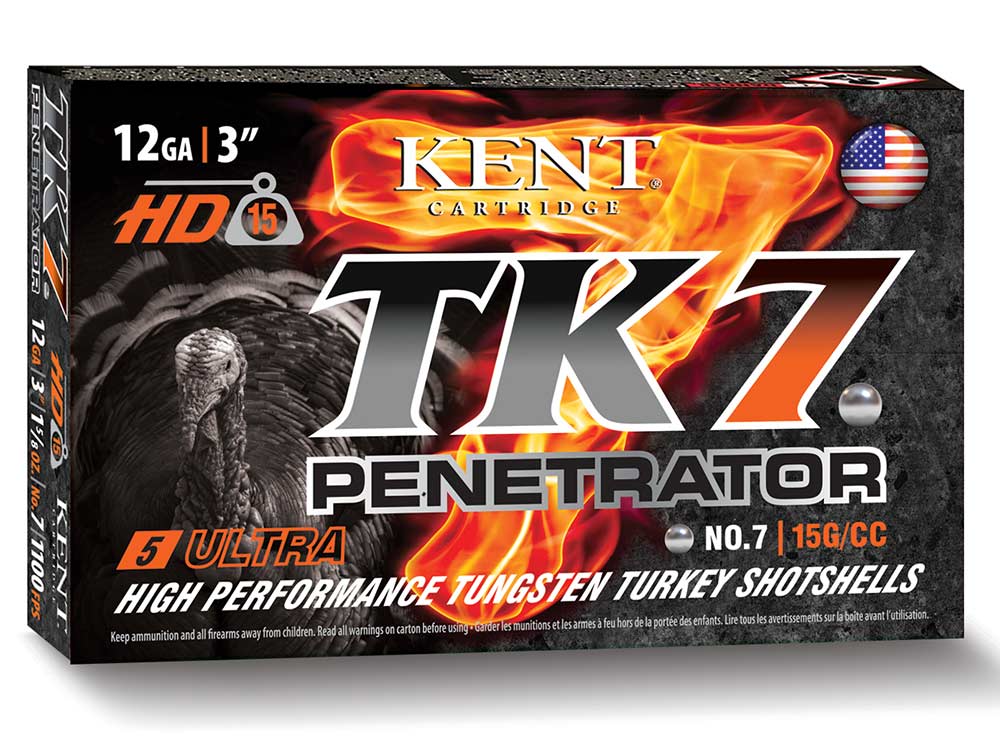 Kent has a new tungsten entry in the turkey load market this spring called TK7 Penetrator. Its tungsten-based pellets have a density of 15g/cc, making them 38% denser than lead. Initially, TK7 is being offered in 3-inch 12- and 20-gauge loads, both with No. 7 shot. Those No. 7 pellets provide approximately 60% more pellets in the pattern than comparable lead loads with larger shot sizes, yet they have a retained downrange energy that’s similar to or greater than that of larger lead pellets. TK7 shot is buffered to deliver dense core patterns into a turkey’s vitals. MSRP $32 for 3-inch 12-gauge, 5 rounds per box

Browning Ammunition also entered the TSS fray this year with the introduction of TSS Tungsten Turkey. This new non-toxic turkey ammo offers both duplex and single shot size payloads of 18 g/cc Tungsten Super Shot. Options include 3-inch 12- and 20-gauge and 3 ½-inch 12-gauge with a 50/50 blend of both No. 7 and 9 TSS pellets or with just No 7s. The latter is a great choice in states where smaller shot sizes are prohibited for turkey hunting. There’s also a 3-inch .410-bore load with No. 9s for those wanting to jump on the growing sub-gauge turkey gun bandwagon. MSRP $44 for 3-inch 12-gauge, 5 rounds per box

Tungsten Super Shot has transformed the lowly .410 from a small-bore starter gun into a serious turkey taker. Recognizing that fact, this year Stevens (by Savage) introduced the new 301 Turkey, a single-shot 3-inch .410 designed specifically for turkey hunting. Its synthetic stock and forearm are covered in Mossy Oak Bottomland or Obsession camo, while the 26-inch barrel and extra-full choke tube (Win.-choke thread pattern) are designed for optimum performance with TSS No. 9s. A removable rail makes mounting an optic easy. For those who still think the .410 is a kid’s gun, there’s also a 3-inch 20-gauge 301 model with all the same features. MSRP $200

Cold, snow, and a finite supply of ammo limited the amount of pattern testing I was able to conduct. Still, it quickly became evident that these new long-range chokes and loads, especially TSS, shoot extremely tight patterns. The best pattern registered 105 head and neck hits using my Browning Maxus, Carlson’s TSS choke and Federal 3-inch 1 ¾-ounce TSS No. 7s at 40 yards. Primos’ TSS choke also shot exceptional patterns at that distance. While I prefer open sights, it would be wise to use a scope or red dot to place these precision patterns on target. Otherwise, if your aim is off even just a bit, you may miss at closer ranges. If you anticipate close shots, consider using Federal’s 3rd Degree which has a more forgiving pattern.